For reasons not relevant, I have spent the whole day reading about circuit breakers and I think I found an issue in the current configuration (changed after a contractor remodeled our kitchen).

I have a Bryant panel. I've included the diagram from the panel and a picture of the breaker below.

My worry is that there are two wires - a red and a black that go through the same conduit up to the kitchen, and the red and black are connected together in a tandem circuit breaker which would both be on the same leg. My understanding is that the neutral might not be able to handle the load if both pull full amps at the same time.

An image is included with the black and red wire together on the 3rd tandem on the right from the top.

I believe I also understand some of what happened. Originally the 3rd and 4th down on the right had 2 blacks and then 2 reds so that the same leg would not travel through both wires with 1 neutral. I had a contractor do work here, and I believe due to some requirement (which I can't figure out) he had to switch the bottom of the 2 with an AFCI. And he put the dishwasher and disposal on that one together. But then he ended up taking the other 2 and putting them together. This is what now seems dangerous.

Anyhow, can someone confirm that this is an issue? Would it make sense to swap out the 4th down with a tandem again and have 2 black followed by 2 red? 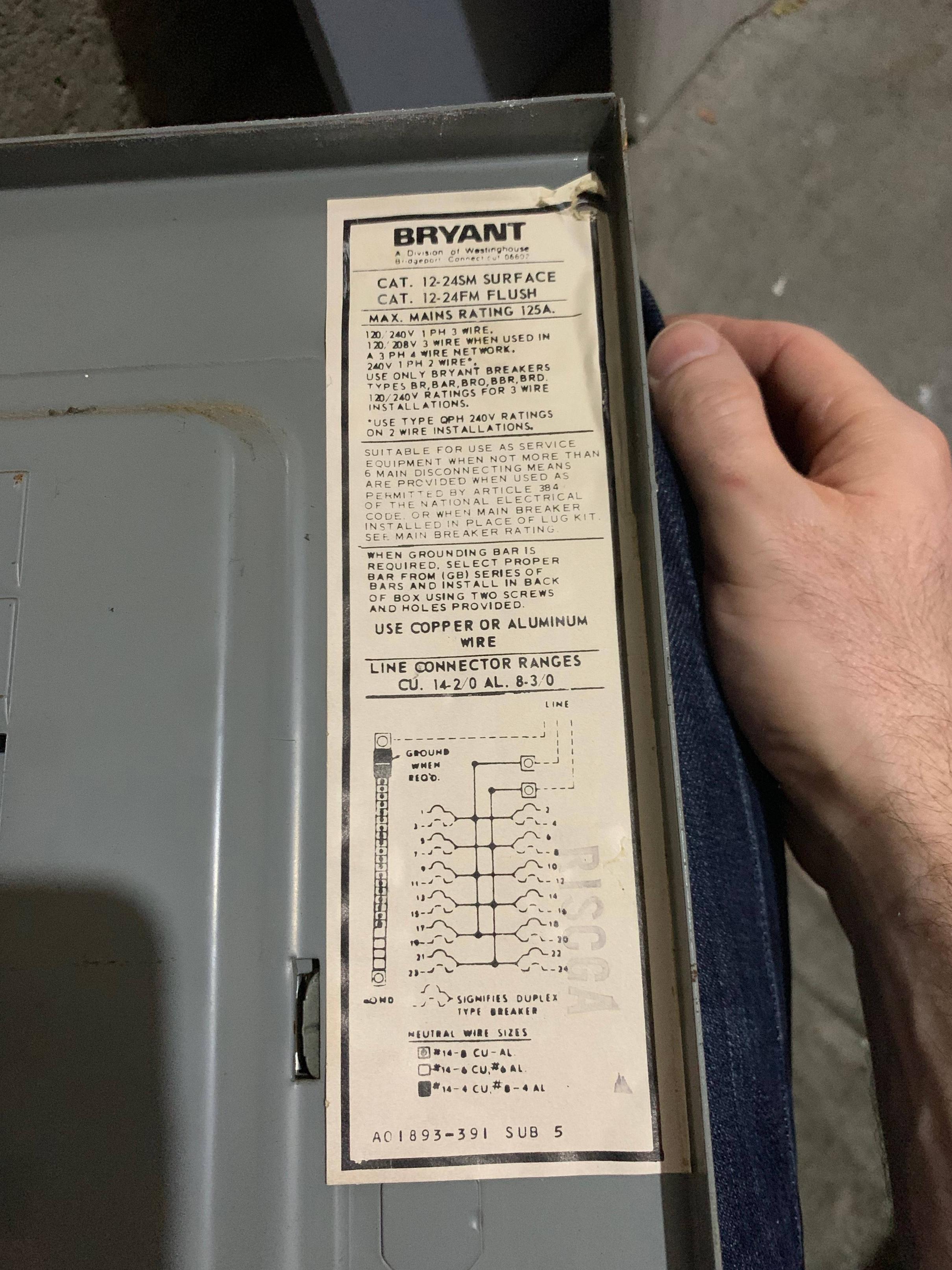 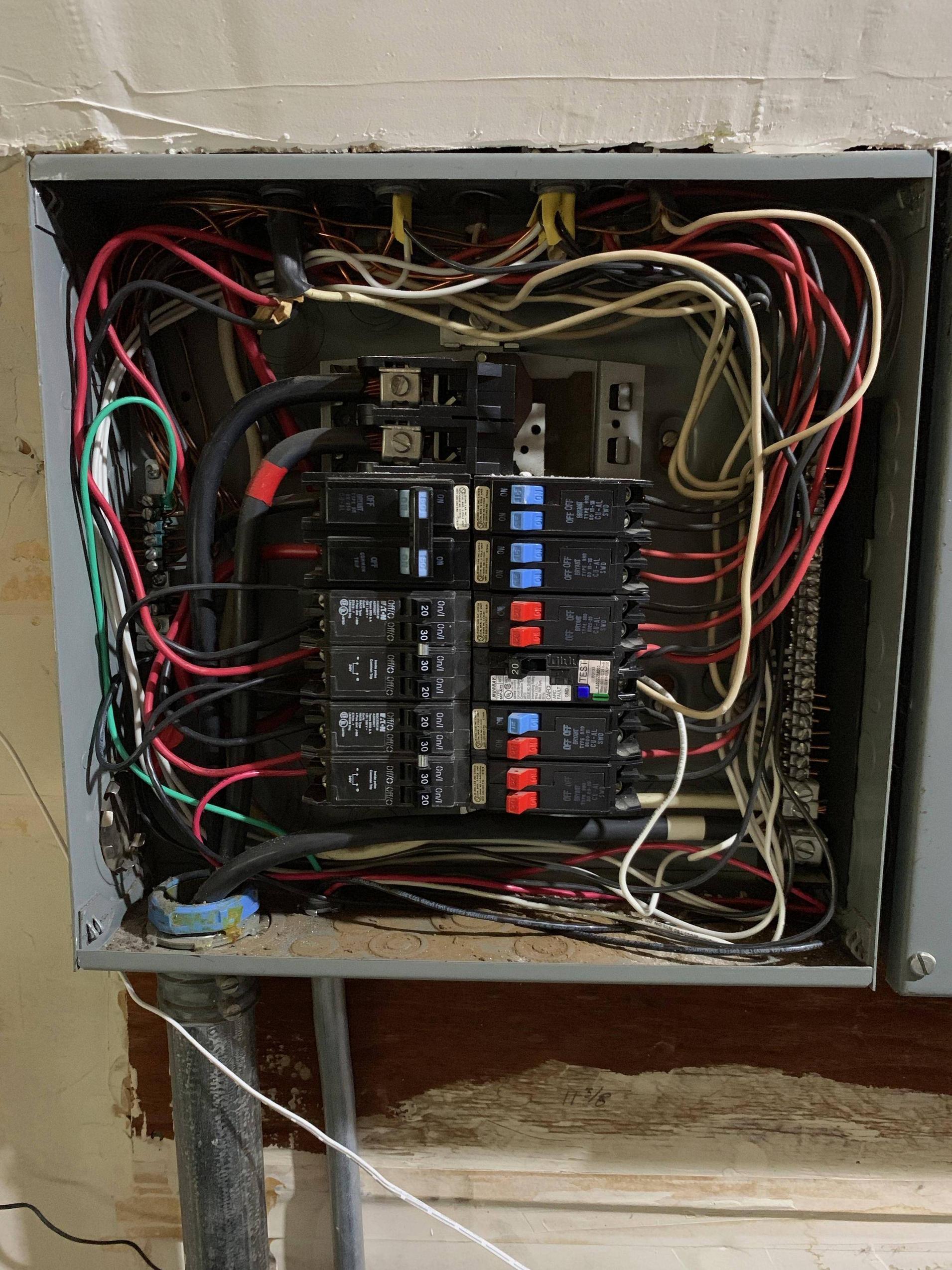 Thanks for the answers - I have switched #3 to use a single 20Amp, but I'm pretty sure this will trip as it has all my kitchen counter appliances. What I'm wondering is if I can combine the black and red from #1 and #2 (not the same MWBC and controls only lights) and combine the other black and red from #1 and #2 into two different legs using a triplex (replacing #1 and #2), leaving me with two breakers that are free. I could then move one set of kitchen appliances to one of the free breakers of the triplex.

Top 2 left breakers are for an electric oven. I don’t use an electric oven. I removed those 2, capped off the wires, and moved the #3 wires to 2 adjacent 20amp breakers in place of the 220v oven breakers (different legs). And the 6th down on the right is not MWBC. One is for the washing machine and doesn’t go the same place as the other wire.

Yup, you're putting 40A on that poor neutral wire.

There's another on bottom right with the same problem

Note the red and black on #6 right. That looks to be another MWBC on a duplex (the very bad thing). Well, I'm not sure of that. Perhaps the last guy was clever and the red's partner is actually the lower black on #5. Still no handle-tie, and my fix-it advice assumes it's the danger-wrong combination, so check it out, and if necessary make it so when folowing my advice.

And you also know that the one the 4th column on the right used to be one, although both are on the same breaker now (codevio?) but at least it won't overload the neutral.

Oh, and one more thing. You also have two more pair of MWBCs in spaces 1-2 right. See that? No handle ties. That needs to be corrected as well, but that's easy - just swap them for a $20 BQC215215 tied quadplex. Follow the wires back to their cables to make sure the inner wires come from the same cable. Because you need to tie the wires in an MWBC, don't cross them!

I gather the way this happened is the "contractor" was not a competent electrician and was there to sell you something else, and just rearranged the furniture as needed to make his AFCI stop tripping, without giving a damn about what he left behind. This is a genuine hazard, and you might want to warn your town's inspector to keep an eye on this guy. If he wants to see it, this question should suffice. Fix this ASAP! No delay.

By the way, notice how they double-tapped the AFCI breaker? Are Bryant breakers listed for 2 wires on a terminal? I don't think so!

Each of these MWBCs also needs handle-ties. You see the quadplex breakers on the left? You can get quadplex breakers in two flavors. One has a 2-pole factory-handle-tied set on the inner pair (just like yours) but the outer pair are independent. The other has that and also has factory handle-ties on the outer pair, making it a viable substitute for two 2-pole breakers. You'll need this last kind quite a lot. 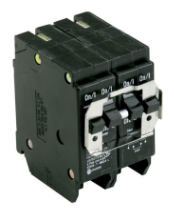 Option 1: Minimum possible: keep CAFCI as it is

Then replace the unit in space 1-2 with a BQC215215 tied quadplex as mentioned.

In this scenario, you undo what they did with the CAFCI and put it back to the way they found it, except with the proper handle-ties this time. You yank the AFCI and again a BQC220220 goes in spaces 3-4 (right). Space 3's wires go to the middle terminals, space 4's wires go to the outer terminals. Neutral back to the neutral bar.

Oh. Wait. There's still the rogue MWBC on space 6 (right) with its red and partner black (wherever that is). Those two need to be in the middle of a quadplex. But what goes on the outside? I see the two independent circuits on the 15-20 duplex right above, but they don't make 15-t20-20 open quadplexes. I suppose you could downgrade the 20A circuit to 15A protection, but that could be its own codevio. Damn.

OK, the only option I see is to replace the 50A breaker on the top left with a quadplex 2-pole 50A + 2-pole 20A, such as a BQC220250. The fat load goes on the 50A terminals obviously, and space 6 Red and its partner go on the 20A terminals. And now there's an empty space in the panel. Fill it with whatever breaker you have lying around, just mark it "no connect".

I was looking for a way to use the spare space to allow a 2-pole (2-space) AFCI so the disposal and dishwasher could be separate again, but it's bleepin' impossible, this panel is just too tight.

All this is stupid. You have already downgraded your circuit capacity (possibly illegally, can dishwasher and disposal be on the same circuit??) and this is only the first time you have encountered the "AFCIs/GFCIs don't come in double-stuff" problem. This is going to keep coming back at you.

So slap yourself on the back, you endured the electrical equivalent of a firewalk, you had a 12-space panel and lived to tell the tale. You can keep your grandkids up at night with your stories.

Now it's time to get a proper panel. I would stick with Eaton and a panel with the top and bottom holes in the same positions. See if you can get Eaton CH since it crams 25% more breakers in the same height. This looks like a turkey-shoot DIY job, since the main breaker is upstream of here so you can de-energize the whole kaboodle. You will need the pull the wires back out of the 2 lower conduits far enough so you can cut the conduits shorter. But it should be straightforward, hand hacksaw then deburr the inside. Reuse the same fittings.

Being a subpanel, the panel needs to have absolutely separated neutral and ground bars. Now they are mostly separated. Fix that now.

I don't see a ground wire, so I expect ground is brought via the metal conduit. That is fine.

You're correct, a multiwire branch circuit with a shared neutral is not safe with both hots on one tandem breaker, it requires a two pole breaker.

If you move the hots for the MWBC to two adjacent tandems you will not be compliant with current codes but you'll avoid the main danger - you will no longer be overloading the neutral. I'd address this immediately.

That would have been compliant when this panel was new, and you'd be done, but current code requires that the switch on the breaker turn off both hots of the MWBC together. This is to ensure that during maintenance both breakers are turned off and the MWBC is all the way dead, not half dead.

You can comply with this requirement by using a two pole breaker or a listed handle tie to make sure the two adjacent breakers are turned off together. A piece of wire through both handles may achieve the goal, but it is not listed. I am not aware of a listed handle tie you can use here but I have never looked.

If all else fails you could install a small subpanel without too much expense to gain some space, and of course you could consider a panel upgrade which may be a good idea in the near future anyway.

Again the main hazard here is the overloaded neutral, address that immediately, but you'll need to take care of the common switch for the MWBC to get fully compliant.

4
Using a 30-amp tandem circuit breaker for a 120/240v circuit?
1
Unsure about wiring in electrical box
1
Power Outlet -3 Wire Conductor on Tandem Breaker Wiring
4
Is too much of my home connected to one circuit breaker?
0
Parallel (2) 20 amp 220 12 ga wires into one 30 amp 220 Breaker OK?
4
What are good uses for tandem (double-stuff) breakers?
0
Breaker connection on common neutral situation
1
Can I replace two Siemens QP type, handle tied, single pole 15 amp breakers with a tandem QT type in the same configuration?
3
Converting Tandem circuit with shared neutral to GFCI
3
Tandem Breaker is in half-off position. Unable to reset