Is it safe to mount a TV below a window?

I have a spot in my bedroom where I'd like to mount a tv.

There is a wall with two closets on each side with a 4' space between them. The space has a built in chest that swings open at the top, and then a window about 2 feet above the chest. There is an outlet between the window and the chest, so presumably there is at least one stud there.

I want to mount the tv so I can still use the chest, but I'm worried about the load on that little stud below the window. Anyone know if this would be safe?

For larger TV's I would want to hit at least two studs. I looked up a random 43" TV on Amazon and it's weight was listed as 17lbs. Unless it's a very old flat TV, it's going to be pretty light, and one stud with a strong mount should be fine.

Use a stud finder to get a general idea of where the stud is. Then take a small drill bit (1/16" is fine) and drill a series of test holes to find the exact center of the stud. 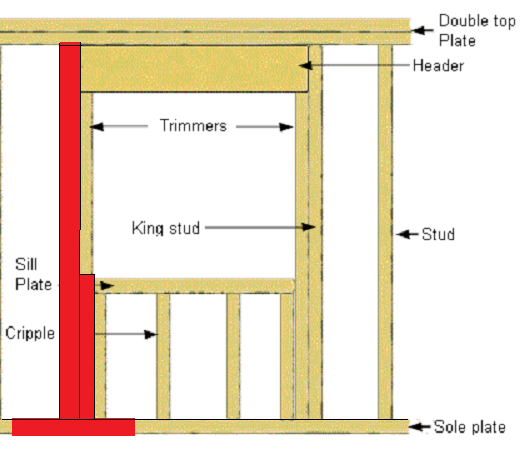 Picture from another question

Your window is higher, but the framing will be very similar. The cripple stud under the window will be securely nailed into the sill plate. That and the strength of the drywall will keep it from pulling out or moving. When installed properly, studs and drywall are very strong.

Not the answer you're looking for? Browse other questions tagged framing mounting tv home-theater or ask your own question.

1
How can I mount a 2" mast to the side of a utility pole?
4
How can I mount a tablet on a wall?
2
Drill getting stuck about two inches into stud
3
What should I do if one of the screws for a TV mount breaks?
1
How to frame around an egress window
0
Any idea what I'm drilling into?
0
Can I use 4 x 4 to extend the space from the wall with a tv mount?
4
How do we add structurally sound faux stud for a single stud TV mount?