2 gang boxes installed side-by-side; How do I fix this?

Recently I took a wall plate off a 4 switch box to paint the wall. When I did this, I found that the wall plate was being held on by paint alone. 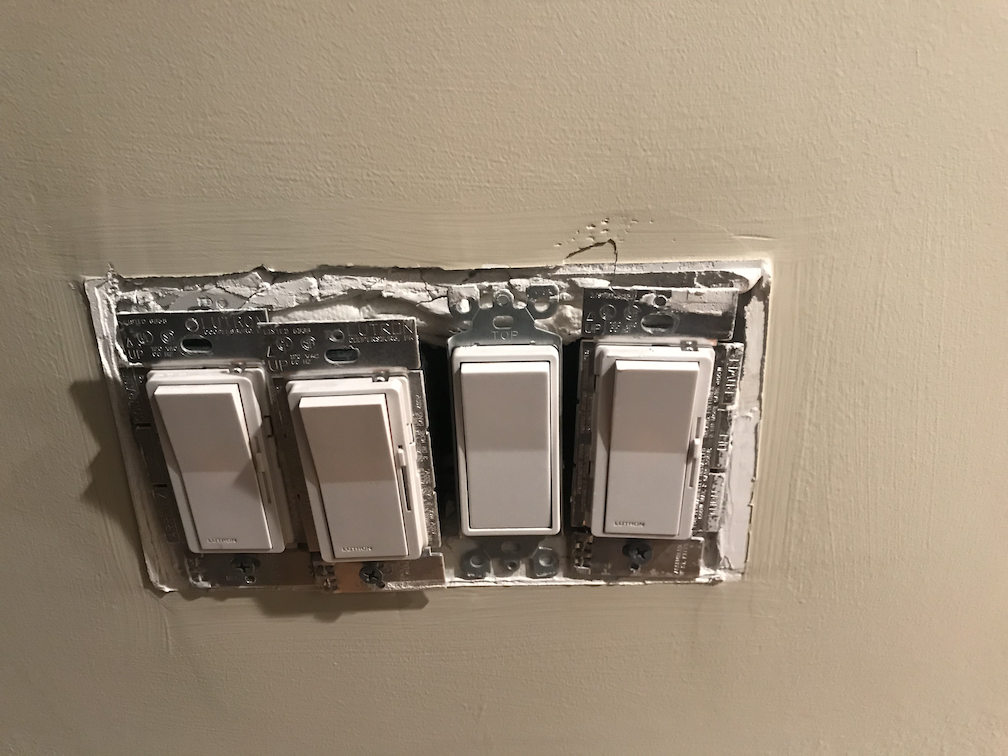 To get things stabilized and provide a way to attach the wall plate, I installed 2 mud rings (shown in the picture). 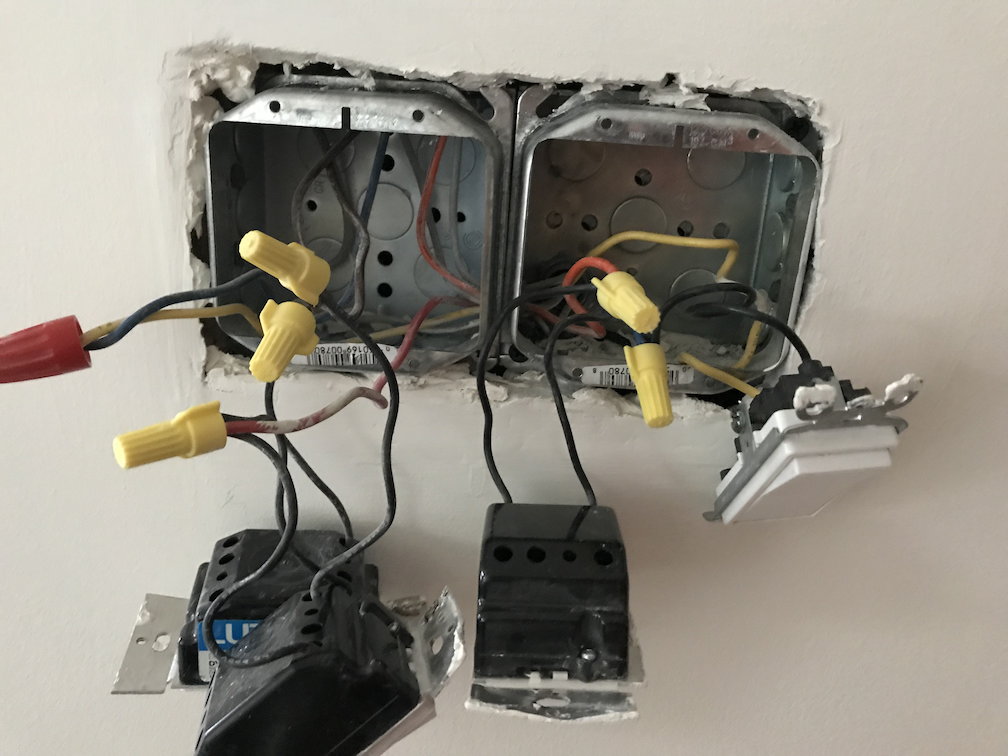 However, I quickly realized that the 4 device wall plate will not cover this now that they are seated properly. I tried initially to fix this by cutting a standard 2 device plate and positioning it next to a standard plate: 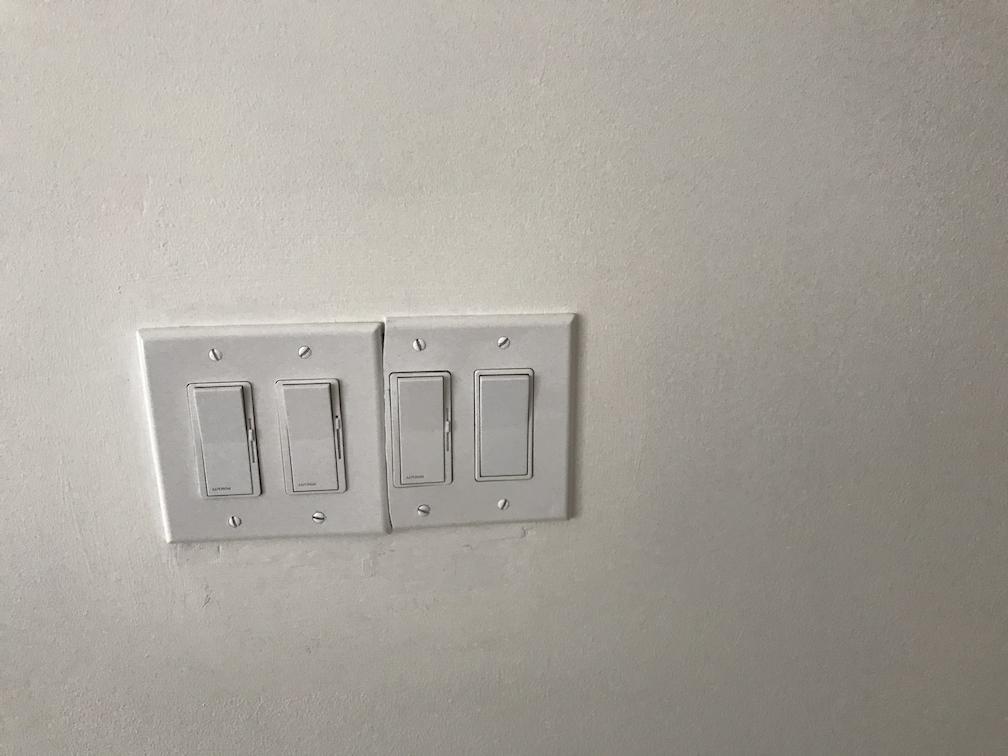 Q1: Is it possible to replace the 2 gang boxes with a single 4 gang box? I'm hesitant to go down this path because my instincts tell me that there is a reason why someone did it like this.

Q2: One other idea I had was to combine some of the switches. Three of the switches control recessed lighting in the room and we rarely turn on one without the others. So, I'm considering combining those 3 into a single switch. I read a few other similar questions but I'm not entirely sure if I can do this. Outside of verifying the switch can handle the load, what other things do I need to consider? Would it be simpler/easier to do this rather than replacing the whole thing with a 4 gang box?

Thank you for any help you can provide!

You have 3 dimmer switches, so if you want to keep them (or combine all the recessed lights into one) you won't want to use any combo switches. Based on what I can see with the wiring, you could attach all the lights to one dimmer (check the wattage rating on the dimmer, but you're going to replace the recessed lights with LEDs anyway, right?). That would leave one dimmer and one regular switch and those would both fit into a single 2-gang box.

If you want to minimize the amount of patch work you do, you can just replace the two boxes with a 4-gang, but you't going to have some repair on the edges either way. I hate having to do drywall repair, so I personally would try to make a 4-gang fit as best as I could, but that's really just preference. I can't think of a reason they used two boxes other than that's what they happened to have on hand at the time.

When you do replace the boxes, make sure the new box has the proper wire clamps on it. Right now I bet the wires are just fed into those boxes with no clamps or anything to cover the sharp edges of the knock outs. Look for damaged insulation on all the wires.

Assuming the 3 switches for recessed lighting are on the same circuit (same hot wire) replace them with a 3-in-1 switch. I have those for light /fan /heat in my bathrooms but there is no reason they can't be 3 light circuits. 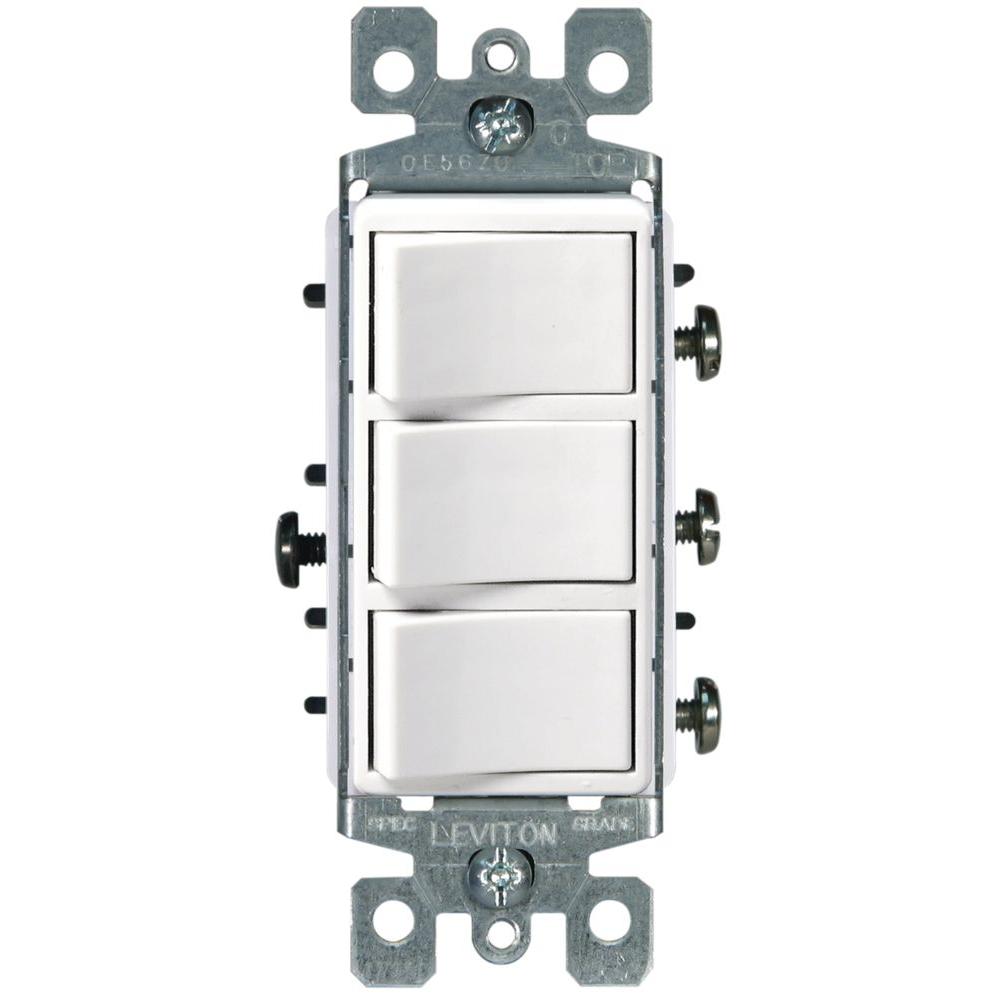 1
Convert 2 adjacent double gang box to 4 gang box; what are these extra wires?

9
How do I mount the new work electrical boxes with the nail-in flange?
4
How do I fix drywall around wall box so switch plate covers damage?
1
What size plate for 2 1-gang boxes side by side
2
Continuous power between multi-gang boxes with 3 way switches
1
Convert 2 adjacent double gang box to 4 gang box; what are these extra wires?
4
Connect neutrals together in 3-gang box (load side) with 3x 3-way switches?
1
How can I fit a face plate to two devices in separate single-gang boxes?
4
How do 5 light switches in 2 boxes with all black wires work?
2
How to align electrical boxes/plugs?