When to replace respirator filters? 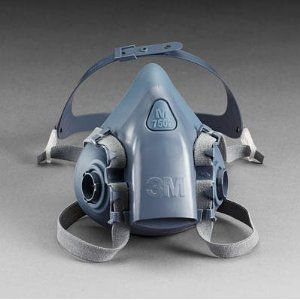 I assume with the particulate filters (for dust) you just change them when they get hard to breathe through, but what about the organic vapor or chemical cartridges? How do you know when they need to be replaced?

You are correct regarding the dust filters... in fact the "caking" particles can sometimes improve filtration... so the cartridges only need to be replaced when damaged, soiled or when they unacceptably obstruct breathing.

As for chemical filters... this depends a great deal on the chemicals being dealt with, as each will have different properties.

Each cartridge should have a specified service life or change schedule... nonetheless, for vapors and certain organic compounds 3M™ recommends that they be used for only a single shift exposure

Can chemical cartridges be used for more than one shift?

Not the answer you're looking for? Browse other questions tagged health-and-safety chemicals filter or ask your own question.

3
What could be causing my spa filter to clog regularly/often; and how can I fix it?
6
How can I determine what is in my water?
7
How to clear pool filter pressure gauge that is stuck?
1
What could cause my water to taste metallic after a water filter cartridge was changed?
2
Should I replace carpet over ancient linoleum that might contain asbestos?
2
Can I build a 3 stage whole house water filter myself?
1
Spray Foam Insulation Health Concerns - Alternative Spray Foam Products
2
2 Air Filters in Air Conditioning Unit
0
Need tips, approach, or method(s) to eliminate smell/odor in a closet short of a tear down?