Can I connect a black wire to one breaker and a red to another from the same circuit?

One of my breakers tripped last week and wouldn't reset so it needs to be replaced. This is a double breaker with a black and red wire. The switch with the black wire is the one that won't reset.

I have an unused single breaker with one black wire.

My plan is to simply swap the black wires until I can replace the breaker.

Will this work or burn down my house? I think this counts as two circuits sharing a neutral? It's a temporary solution either way.

Yes this is a zinco and will probably kill me. We're working on replacing the whole thing.

I'm not a professional but I've pretty much rewired half of this house.

I have a good understanding of how not to kill myself messing with my breaker.

EDIT: So I ended up trying to pigtail with the one above it, and it tripped. Seems I still have a short. I'm reading up on ways to troubleshoot and will take another shot at the pigtail until I can buy a new breaker, panel, house, etc. THANK YOU! 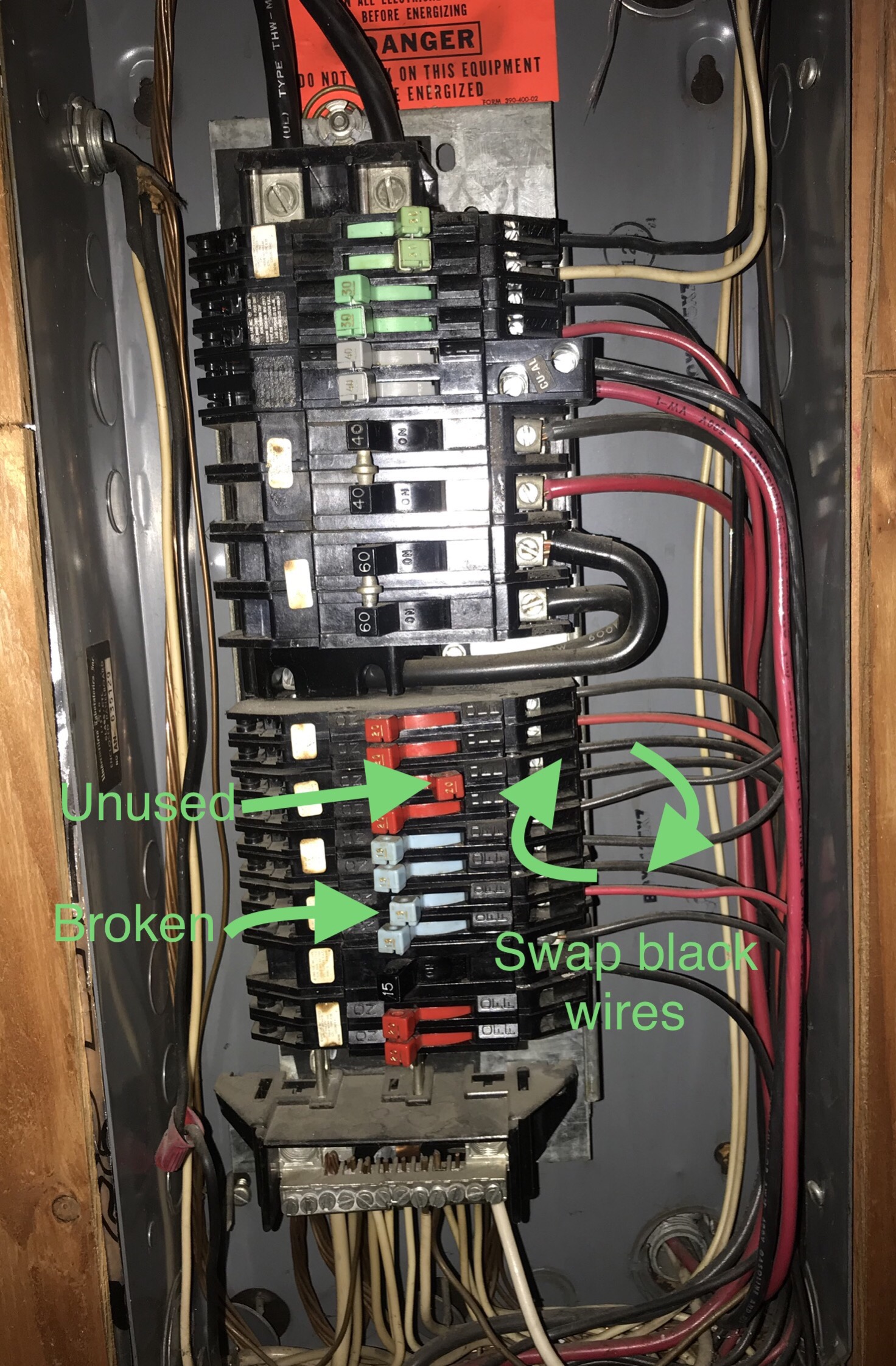 No, no, no! You would be upsizing the breaker.

The breaker you propose to move to is a 20A. That will compromise its protection because it'll allow 20A on a hot wire only made for 15A. Don't do that.

But there's an even bigger risk

On a shared-neutral circuit (its proper name is Multi-Wire Branch Circuit or MWBC), the two "hots" must be on opposite poles. There must be 240V between them. If there is, then neutral will handle only differential current. However, if they are on the same pole, there will be 0V between them, and that means neutral handles the sum of currents. I.e. On a 20A MWBC, neutral would be handling 40A.

Now on these Zinsco style breakers, they clip onto two parallel rails. These are funny ducks. These are "double-stuff" breakers, two independent breakers crammed into one space, and again, the lack of handle-tie gives this away. ThreePhaseEel says they are locked into 2-pole (opposite pole) mode, which does make them suitable for MWBCs.

Regardless, Code now requires MWBCs be on breakers which are either 2-pole with tied handles (or handle-tied with a listed factory handle tie, but on this panel, that'll be a unicorn). The reason MWBCs require tied handles is they must have common maintenance shutoff so you don't measure out a circuit, find the breaker that turns it off, disconnect the neutral and get nailed by the other half of the circuit. A side-effect of this handle-tie requirement is it forces the sub-circuits onto opposite poles.

Don't overthink it, though

The easiest way to solve a "dead breaker, full panel" problem is to take the now-dead circuit and add it to another circuit. So now one breaker is powering 2 former circuits. Choose the breaker so they are the same size, obviously.

You do the splice with a wire-nut and a pigtail. Join the 2 hots and a pigtail in a wire nut, land the pigtail on the breaker.

You must still be careful with MWBCs, and don't accidentally wire the two MWBC sides on the same pole. However, if you excuse the Ghostbusters references, we can "cross the streams" by putting both MWBC hots together on the same single breaker. Normally "that would be bad" (both hots are on the same pole), but since they're coming off the same (say 15A) single breaker, the summed current can't exceed 15A and the neutral can handle that. So we're OK.

Oh, but that panel

Aside from this being dangerous...

... also, that is a "Rule of Six" or split-bus panel. This means your house has no main Main breaker. "Rule of Six" means "up to six" breakers in the Upper Section (the top 7 spaces) are, collectively, your main breaker, and you must turn off all 6 to deenergize your house. In your case, 5. Those top 3 breakers are 2-pole, note the factory handle-ties. For "Rule of Six" purposes, a handle-tied breaker counts as one throw action.

Below that is another section of the panel called the "lighting section" where all the ordinary loads are expected to be. This section is effectively a subpanel, and it is fed from the bottom 60A breaker in the "Main Breakers" section. You can see the fat feed wires. Anyway, one easy option here is to fit a real subpanel adjacent to this panel, with modern breakers, and move all the "subpanel" circuits over to that real subpanel. Then you can have real 2-pole breakers on your MWBCs or ones with handle-ties.

However it may be that the fault isn't cleared and the short is still there which would be the reason it won't reset. Breakers are designed so that you cannot force them on in the presence of a fault. After you disconnect the wire from the "faulty" breaker try resetting it again. If it stays reset then it's a fault in the circuit and you have to hunt for the loose connection before you can energize that circuit again.

I am not sure I understand your question properly, so I will restate it.

You want to take a conductor from a failed breaker and put it into another breaker for temporary operation. You do not tell us the load on that conductor. For example, whether it is two 120V circuits with a common neutral, or it is a 240V appliance.

There is a major risk in moving a conductor from a tandem breaker to another breaker. If the circuit is used for 120V, you could possibly feed the black and red from the same phase (L1 or L2) and this could cause twice the current in the neutral, exceeding the capacity of the neutral (and causing a fire risk).

A lesser risk, if you had a 240V application would be that if both legs are on the same phase, the appliance would not work for 240V loads, but would for 120V loads.

Looking at your panel, it appears that the swap you want to do is with breakers on the same phase, which would be OK. But I would confirm it with a meter prior to doing the swap. You can do that even if the failed breaker will not reset, by verifying the phase of the adjacent breakers.

You think one of the breakers in a tandem pair of breakers has failed, but there could be an actual short circuit or an overload with too many high draw loads connected.

To test whether the breaker has failed or there is a short or overloaded circuit:

31
What is a tandem breaker (aka duplex, cheater, twin, double-stuff, etc.)?