How to repair/replace old tongue and groove plank subfloor in bathroom?

After my bathroom was demoed, I discovered that the subfloor is in bad shape. The home was built in the 1960s and the subfloor consists of 3/4" thick tongue and groove planks running diagonal to the joists. I do not know if it was poorly constructed or if this naturally happened over time, but the tongues and grooves of the planks across much of the floor are no longer nesting within each other. As such, the floor does not have much structural integrity.

As you can see in the photo below, a section of the floor broke away easily during demo. There are other sections that flex so much that I feel like I'd break through if I attempted to put my full weight on it.

This is a bathroom that will have a tile floor so the goal is to properly support the tile, a bathtub, etc.. Outside the bathroom is 3/4" hardwood and I'd prefer not having too much of a differential with this.

I have had a few contractors present some different approaches that include cutting out the old floor and completely replacing it or simply adding a thin layer of new plywood on top of the old floor. The thin layer on top seems like the simplest approach but I have concerns with both building on top of a questionable old floor as well as about the extra height (what would be the minimum acceptable thickness for the new layer in this case?).

What is the proper way to repair this floor? 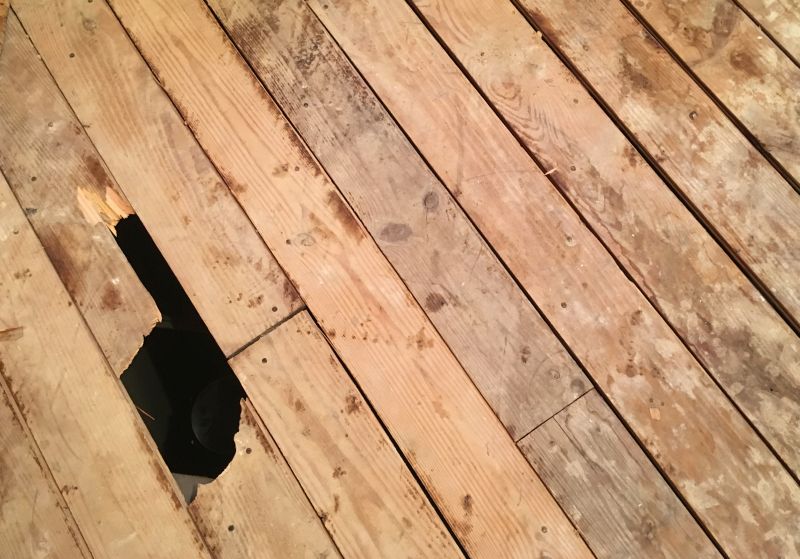 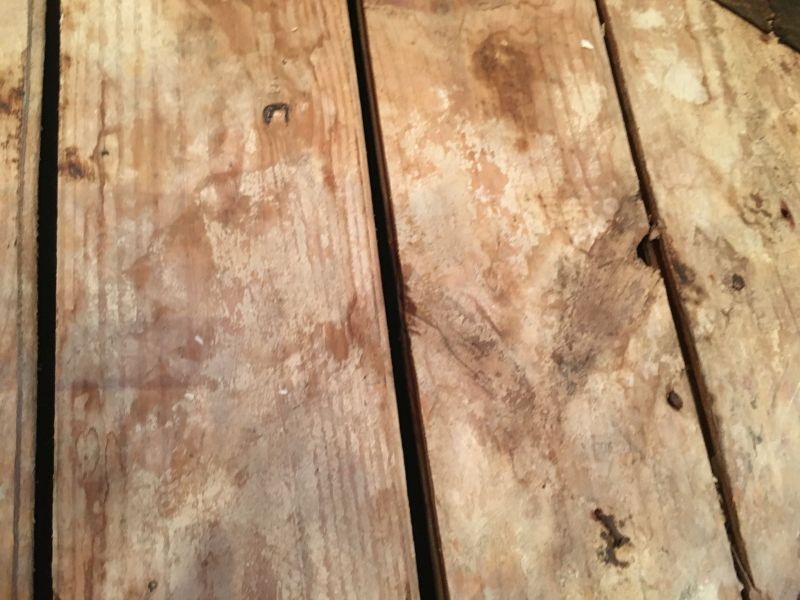 The following options will perform equally, their differences are time, cost, and thickness of the subfloor. Best case scenario you'll still have a 3/4" subfloor, worst case you'll have 1 1/4" (sorted most economical in cost/time to least):

Once you've blocked out the floor reinforcements take a look at the joist spacing.

Subfloor replacement selection - OSB or Plywood. For tile, plywood is generally recommended by manufacturers over OSB.

Not all sheathing is created equal, however if you're picking up sheathing grade from a big box store, they hold a respectable graded sheet which is what I'm going to base the rest on.

If you're going to lay sheathing on the existing floor, you need a minimum (emphasis on minimum) of 3/8". Whether it's T&G or not, anything less than 3/8 is a waste of money as it's not structural.

Either T&G, or square edge is fine, what's important is to space them 1/8" apart (use something that's credit card thickness for spacing). Ideally glued in the seam if it's T&G, and to the joist using an ASTM D3498, or APA AFG-01 conforming adhesive (PL-400/Premium, Lumber Lock, AdvanTech for example). Before applying the glue, make sure all surfaces are clean and dry.

There aren't any perfect videos, however for the preparation this video has great considerations: https://www.youtube.com/watch?v=CgWtHSsww-4

Notes about blocking, use a minimum of 2x6. If you're going to use screws, I'd suggest structural screws like these

End product should look like this, ready for a well supported subfloor: 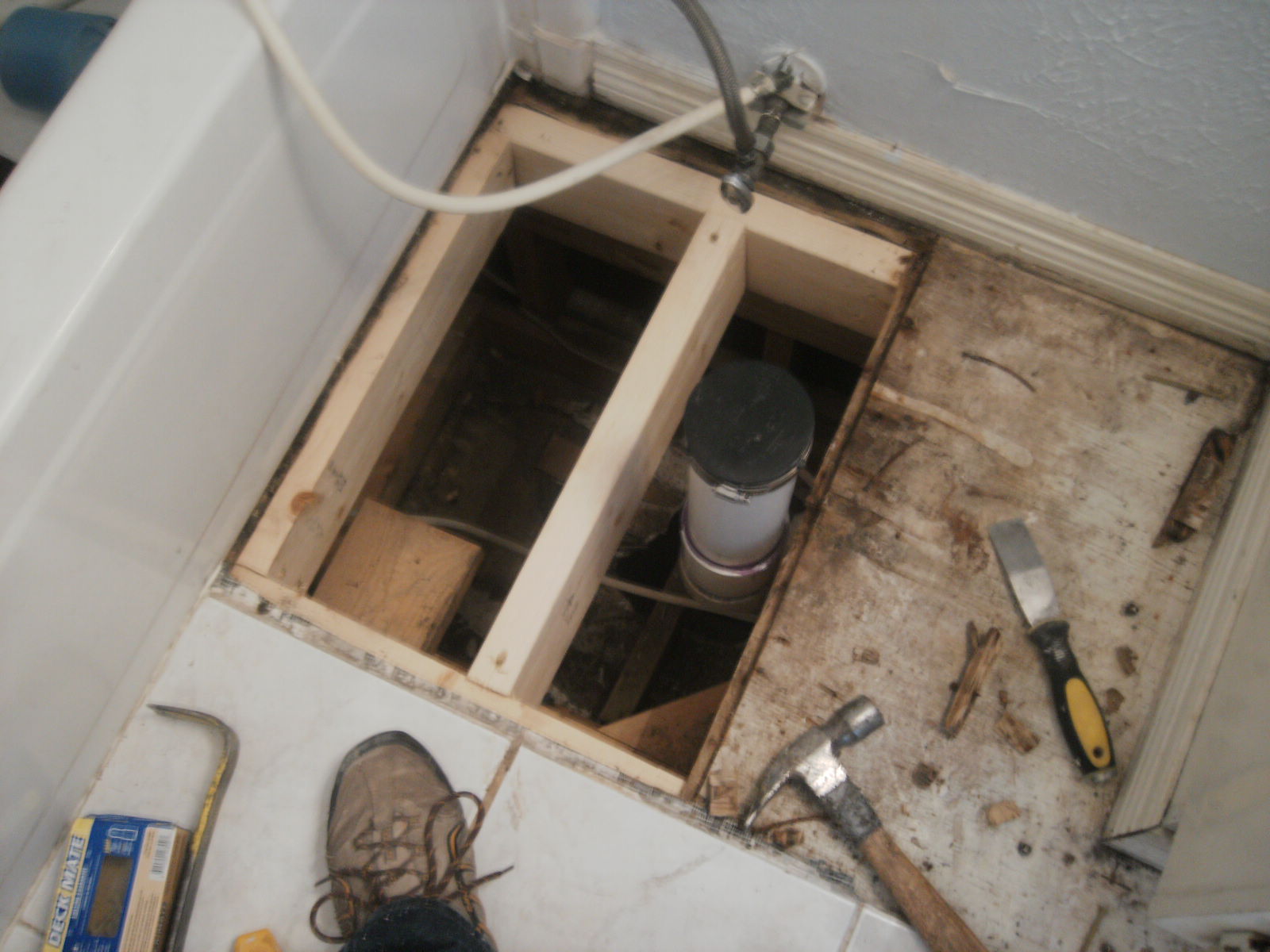 Ditra install guideline (they guarantee replacement if tiles crack so they'll give safe numbers) bottom of page 7 for your setup: https://sccpublic.s3-external-1.amazonaws.com/sys-master/images/h71/h71/8858545389598/DITRA%20Installation%20Handbook.pdf

Page six for the bare minimum required for sheathing based on joist spacing: http://www.tolko.com/system/resources/W1siZiIsIjIwMTcvMDEvMTgvMTBfMjFfMzNfMjM3X0FQQV9FbmdpbmVlcmVkX1dvb2RfRmxvb3JfU3lzdGVtc19Db25zdHJ1Y3Rpb25fR3VpZGUucGRmIl1d/APA-Engineered%20Wood%20Floor%20Systems-Construction%20Guide.pdf

I wouldn't chance going over it either. If it's easily breaking and giving when you walk on it, replace it with new T&G sub flooring. Otherwise, you are going to have a bunch of cracked tiles. You might even have some floor joist issues to deal with and you can't really find that out without removing the old sub flooring.

You can start by cutting as close to the wall as you can with a skill saw. Set the saw depth just low enough to get through the existing sub floor. The circular saw will not get right against the wall because of the guard. You will need to use a reciprocating saw, jigsaw, Bosch Starlock Plus or Starlock Max. Once all of the old flooring is removed. Make sure all nails & screws are removed and the tops of the joists are clean and level. Install the new sub flooring with liquid nails on each joist.

If you run into joist issues you'll need to ask another question.

Cost is the biggest issue. Replacing it completely is the obvious choice. That's expensive. You can easily add 1/4" ply glued and screwed down and it will be totally structurally safe. You may however get squeaky, spongey floors. If you can fit it in your budget redo it with a new flooring material especially if you are going with tile.

It's often less expensive to do it right once.

Not the answer you're looking for? Browse other questions tagged bathroom subfloor or ask your own question.

3
How can I remove just one tongue-and-groove subfloor board?
3
Should I replace bathroom OSB subfloor with plywood?
0
How to flatten an uneven plank subfloor when the existing planks can't be removed?
3
Tiling over old 2x6 tongue and groove subfloor. Underlayment? Levelling?
3
How do I repair my partially rotted subfloor?
0
If the top layer of my subfloor is structurally sufficient, can I skip patching plumbing holes in the bottom layer?
1
Wall plate and subfloor repair in bathroom
1
How should I handle reflooring the bathroom of an old house?
0
How to subfloor basement bathroom for tile?
2
Can I remove these planks from subfloor?