Can anyone help with a solution?

I have a 3 wire coming from a smoke detector in the basement into a switch at top of stairs (3wire providing the hot) and from that switch it feeds two light fixtures with 2 wire. How do I install another 3way switch at bottom of stairs to control those two lights without affecting the smokes because it's clearly on the same circuit.

Thanks, much appreciated James 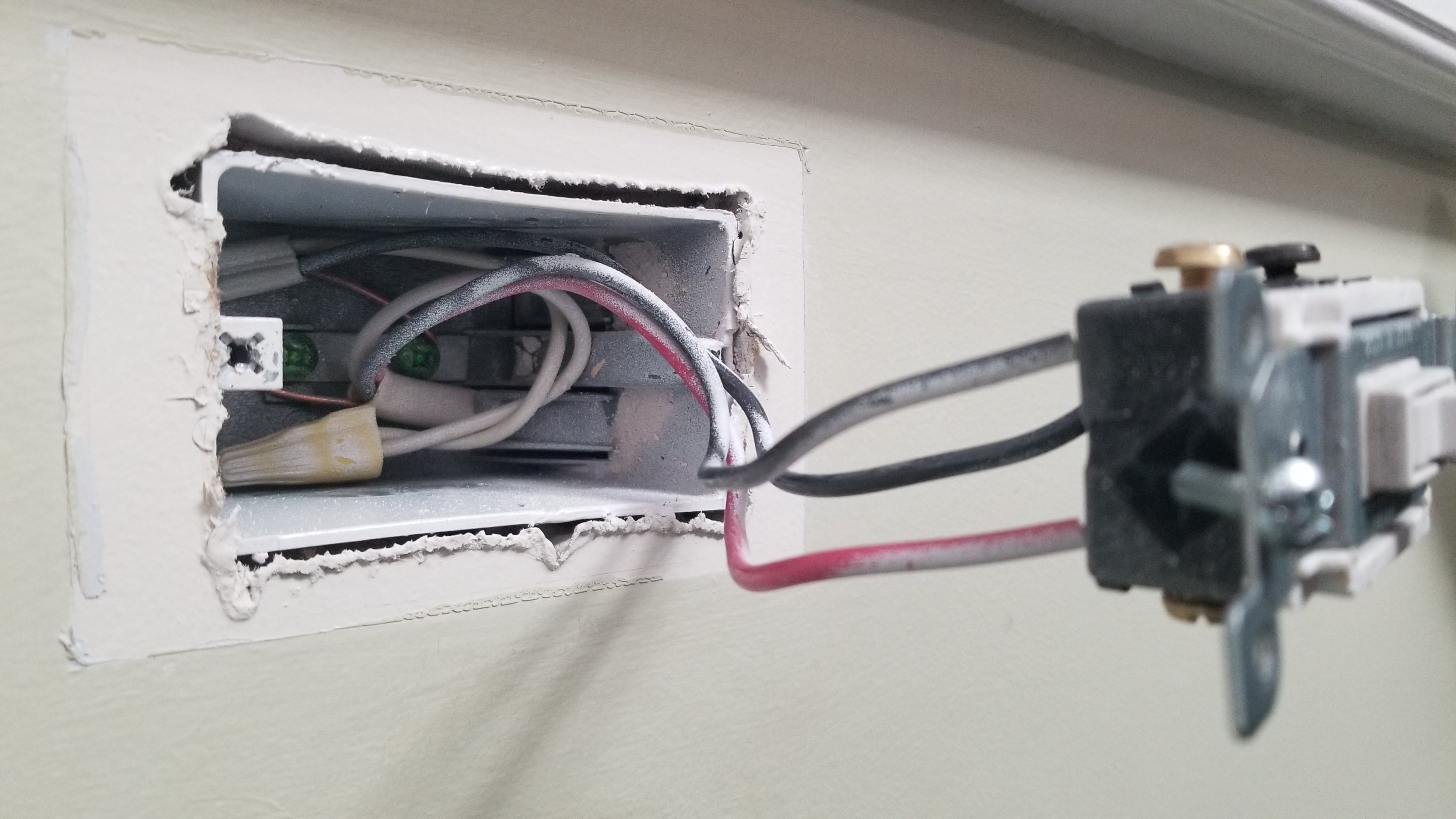 What happened is that a /3 cable got run from the smoke detectors to the switch box, but with the red wire capped in the switch box as the light switch should not be connected to the interconnect wire. Then later on, when the 3-way was disconnected, the homeowner was wondering what to do with the "extra" red wire, and hooked it up to the switch as "all the wires should be hooked up", in his mind at least.

However, that's not how it works. With the breaker off, take that red wire out of the switch and cap it off with a wirenut once again (you may need to tape the nut on to get it to hold). Now, you won't have to worry about any issues that could be caused with your smoke detectors by the light-switching arrangement.

Once you have the situation with the smoke detectors sorted, run your /3 cable between the old and new switch boxes. The ground wire in the new cable ties to a grounding screw in the old box (since it appears to use screws on a backstrap for grounding instead of the normal scheme) and to the grounding arrangement in the new box, while the black wire from the existing /3 cable nuts to the white wire (taped black) in the new /3 cable instead of being run into the switch, and the red and black wires in the new /3 cable connect to the brass screws (use the screws please!) on the existing 3-way switch. While you're here, move the black wire from the /2 cable from the backstab to the black screw terminal on the switch.

In the new switch box, tape the white wire black and connect it to the black screw on the new 3-way switch. The red and black wires then land on the brass screws of the new 3-way. Once you're done with both switch boxes, then you can button everything up, turn the breaker back on, and enjoy!

I can't make sense of what you have going on but, the smoke detectors are simple black and white to each of them in the house and the red involved in the smokes is just a signal wire to turn them all on if one goes on. That being said the, aside from the line and neutral wire you can largely ignore the smoke detectors. And yes that picture is a 3 way switch.

I can't make sense of what you have going on but, the smoke detectors are simple black and white to each of them in the house and the red involved in the smokes is just a signal wire to turn them all on if one goes on. That being said the, aside from the line and neutral wire you can largely ignore the smoke detectors. And yes that picture is a 3 way switch. In these pictures you can see the proper way to connect SDers and 3way switches It's okay to use the hot and neutral front the SDs to power your light but not the red one. The red wire in the SD circuit is a signal wire. So you need to add your 3way according to the image and then pick up hot and neutral from the SD circuit.

You just need to pull one 3 conductor cable to the second 3 way and connect it like this. Disconnect the red from the SD cut the bare copper and wire nut it off. 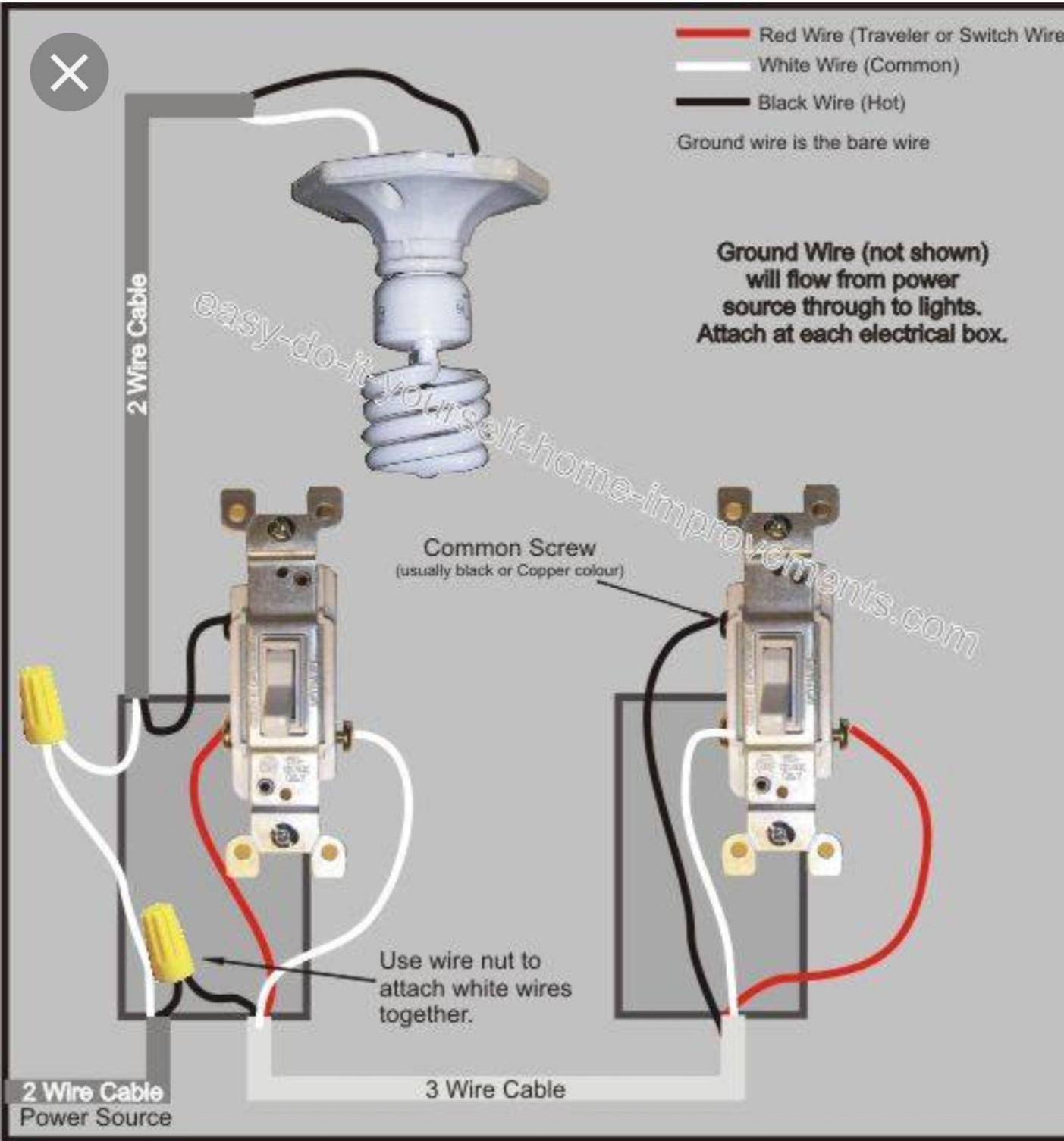 0
How do I wire mutilple sections of lights with 3 way switches to same power source?
1
Wiring existing 3 Way Switch in basement stairs that was cut
0
Adding switch and new fixtures to basement chain lights. Why does it short?
1
Combine two independent switches into 3-way?
1
How can I wire a 3 way switch with power feeds to another switch?
2
Why neutral wire connected to load wire?
0
Electrical (3way switch and wire but single pole)
2
Replacing Outlet with Switch Middle of Run
1
Nearly all basement lights dependent on switch at top of stairs
3
Multiple 3 Way Switch wiring