Hiding cables when moving network switch down from attic

We had an installer put in security cameras a few years ago (PoE-powered), and he decided the best place to install the network switch would be in the attic, since that made wiring the cameras easier (because they are all under the eaves).

The problem is that it gets extremely hot in there during the summer, often up over 100 degrees (F), and the network switch is rated to operate only up to 104. We have experienced connectivity issues to some of the cameras, and my first thought is that the switch is dying due to its environment.

In any case, we are now installing more cameras (and probably IP phones in the near future) and need a larger switch. I am currently planning for 16 cables to go up to the attic, and am installing a 24-port switch to give future room to grow.

I have selected a location inside the building to install the new network switch (inside a sound-dampening network cabinet because it is in a public space), but I need to figure out how to run the wires down out of the attic.

Here are the options I have considered at this point:

I really want to do the first option just because it is the easiest, but having an open hole is a major issue.

What is the best way for me to go about this? Is it one of these options? What can I do about the issues mentioned for each one? Is it something else entirely?

What I ended up doing turned out to be the simplest solution: picking a different mounting location.

In the new location, the network cabinet is mounted directly touching the ceiling, and the cables go directly through the drywall into the cabinet. 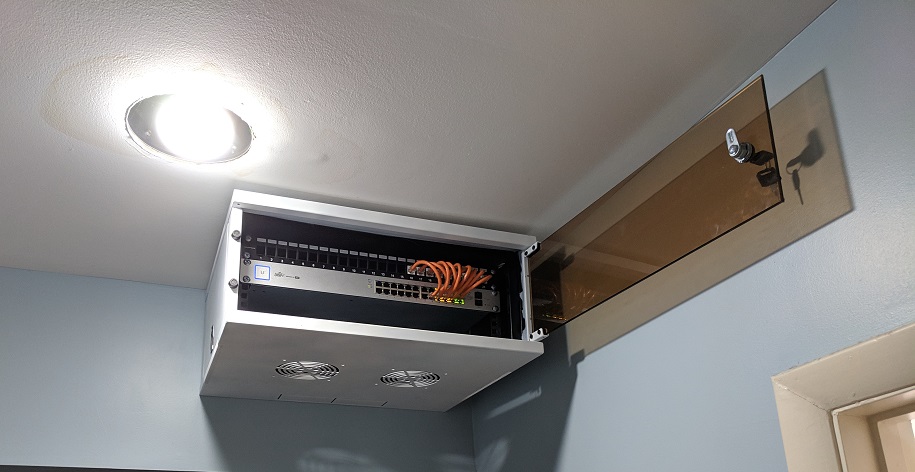 I can tell you what I've done/am doing. I'm using rigid PVC conduit rated for electrical cable, elbows/junction boxes, and where required, duct seal compound, like https://www.homedepot.com/p/Gardner-Bender-1-lb-Plug-Duct-Seal-Compound-DS-110/100212441. You could also add some fiberglass insulation as well, and/or steel wool. At any place I have to pierce the barrier between the attic and the rest of the house, I use expanding fireproof foam to surround the PVC pipe. You could also use "smurf tube" or the like, but it's easier to seal around rigid pipe. In order to run the PVC conduit through the attic, if you choose to do that, you'll probably need an expansion joint.

Note, though, that in order to pass 24 CAT-6 cables (my preference, for future proofing), you'll need 2" conduit at least.

Not the answer you're looking for? Browse other questions tagged ethernet cables or ask your own question.

5
How one is supposed to "plug" a conduit running from basement to attic?
4
How to seal hole from bundle of ethernet cables running through wall/floor?

4
Use 10 inch network patch panel with 19 inch switch
2
Are Cat6a keystone jacks suitable for Cat7 Ethernet cabling?
2
Proper craftsmanship to mount Wi-Fi AP and ethernet cable to ceiling?
2
Possible to attach an external electrical box to an old work box?
4
How to seal hole from bundle of ethernet cables running through wall/floor?
2
Clarifying separation of ethernet cables from cables running power (underground)
8
Conduit to run ethernet and coax from basement to attic
0
Why is my IP camera not detected when connected using a cat5e cable?