How can I replace multiple 3 way switches with motion sensors?

My tenants never turn the lights off in the stairwells of my 3 family house, so I'd like to replace all of the light switches with motion sensors. Here is a crude diagram of how this is set up now. 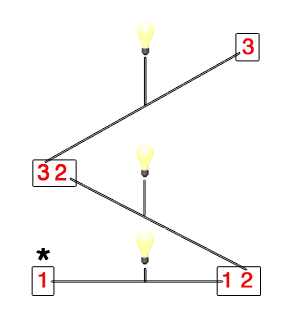 You can probably replace the switches with those sensors, but you're going to have to do some creative wiring to work around the fact that they're not 3-way switches, but the switches you're replacing with them are. You'll likely end up with the light being on whenever either of the switches is on. You also might run into trouble if they ran the 3-way switches as a switch loop (no neutral in box), because "smart switches" like these require a neutral so they can use power for themselves to decide when to switch on and off.

Here's what the difference between these wiring schemes looks like if you draw it out: 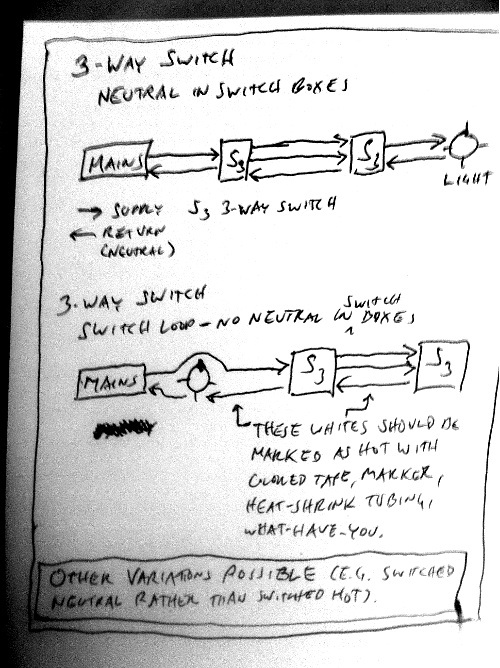 Also note that those occupancy sensors still have a hard-on switch, so your tenants can still just leave the lights on. You might want to look instead at vacancy sensors. (An example vacancy sensor is Cooper Wiring Devices K01-400RW-L, but note that it does not handle CFLs, just incandescents.) These, you tap to turn them on, and they turn themselves off automatically when everyone's gone. That sounds more like what you want.

The how for switch #1 depends again on how they wired your #1 switches and the light they control together. If you diagram out the connections, it becomes straightforward. Until you have enough info to diagram it out, you don't have enough info to rewire it, either.

As an aside, all the exterior stairwell lights I've seen in apartment complexes were on timers. They'd come on around dark and flip off in the morning. I knew they were timers rather than photosensors because a couple times a year they'd end up slightly out of sync with actual daylight hours, but if these are in fact exterior lights, putting them on a photosensor and disabling the switches entirely might be an option.

At the risk of being a complete ass, you are likely putting way too much effort into a plan that is not likely to work.

You start with, "My tenants never turn the lights off ... ."

This is not an issue of electrical wiring, this is about the tenants behavior.

In trying to help, my question to you is, why do you think your tenants are not going to just turn the sensors into the 'On' position, and leave it there ?

Feel free to just smack me on the nose with a rolled up newspaper.

And I will be happy to help electrical, but technology will not win out over thoughtless people.

I have idea. How about we use two motion sensor to replace these two switches? And we will use ESP8266 or Arduino to have the programming like: when motion sensor 1 or motion sensor two are '1', turn on the light.

GarretGarret
1
1
Add a comment  |
Highly active question. Earn 10 reputation (not counting the association bonus) in order to answer this question. The reputation requirement helps protect this question from spam and non-answer activity.

Not the answer you're looking for? Browse other questions tagged electrical lighting wiring switch motion-sensor or ask your own question.

15
How can I override a motion detector light?
5
Can multiple 2-way occupancy motion sensor switches be used together?
2
Is there a 3-way occupancy switch with one sensor being external?
1
Replace one of the 3way switch to sensor switch in the hallway
1
How to Wire Fantech FR100 in-line exhaust, venting two bathrooms with Two TopGreener TDHOS5 Humidity Motion Sensor switches
0
How to wire switch for outside motion sensing light
1
Motion sensor with bypass switch?
1
How can a circuit be designed with a switched live connected to multiple PIR motion sensors? [UK]
0
How to wire a switch with multiple lights
1
Help with 4-way (5 switches, 2 lights) wiring and Inovelli / Lutron Caseta Pico replacements