How to unclog cast iron T drain for three sinks

I have a common drain for three sinks the clogs 1-2x per year. All three sinks back up at the same time and slowly drain. Total distance between sinks is about 25ft. I suspect that the sinks share a common lateral drain pipe and a T comes off that (hidden in walls) to a visible diagonal drain (several bends) and then down. All interior piping. If I snake down a sink, it just goes across to the other sink.

I have cleared the clog by snaking up the diagonal drain pipe (~5ft from a removable coupling). But as stated in other posts, this is probably only creating a hole in the clog. The suspect T is not visibly accessible. The T is probably ~10ft from the closest sink. There's a roof vent somewhere along the lateral pipe.

I have tried running hot water down sinks on both sides of the drain, but that does not seem to help.

I don't want to damage the cast iron pipes or replace them at this time.

Any suggestions for clearing the bigger clog? Anything safe to pour down the sinks that would dissolve hair, scum, etc? I can poor from both sides with or without water in the pipes (~10ft to the T). It will sit there for a while and slowly drain. 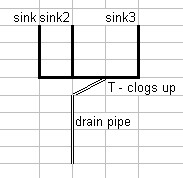 Epilogue: I ended up replacing a one foot section of the drain pipe below the T with a clear piece of PVC pipe. I drilled a hole in the PVC pipe and covered it with a sliding rubber coupling. I can now run a snake up the drain pipe to the T area without removing the drain pipe. I also tried a water jet, but it was difficult to maneuver. I also periodically pour hot water and liquid soap down the sink drain to reduce potential blockages. Not ideal, but manageable.

Thanks for the suggestions!

Heavy duty professional drain snakes have a variety of attachments available for clearing all kinds of clogs but those are more of a pro tool than DIY.

I would attach one of the inexpensive plastic barbed clog removers to a snake and very carefully run it up the diagonal to the tee. 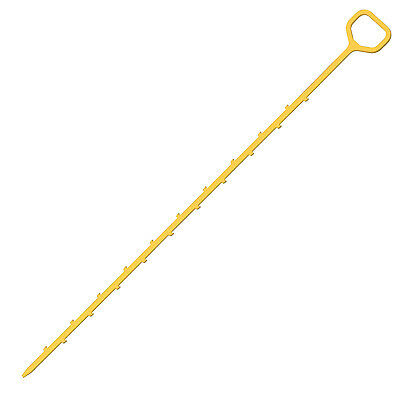 You'd want to be very careful to make a good secure attachment so you don't wind up with a remover lost in the drain pipe. I'd probably use bailing wire and electrical tape and at least a 6" overlap. (You'll see you'll want the ring end lashed to the snake - that way the barbs pull the debris back to you.)

With patience there's a good chance the barbed remover will hack up and retrieve the clog.

If there's a way to securely plug two of the three sinks, then you might find a toilet plunger in the third sink would help clear the clog. Or, you could use one of those expanding drain cleaner bladders.

Not the answer you're looking for? Browse other questions tagged plumbing drain sink clog or ask your own question.

0
Care and feeding of a long kitchen drain?

2
How to fix a slow draining sink?
1
How can I clear a slow running kitchen drain?
2
Toilet continually slowly drains days after I clear it
6
What are some ways to remove hardened epoxy from drain pipes?
1
How can I reduce the sound of my HVAC condensation drain?
11
Snaking a clogged tub drain
2
Sewer line repair - most cost effective method?
1
Bathroom Sink Clog
1
Why does one of my bathroom sinks drain slowly when the water is running, but drains quickly when filled and drained?