Does this truss have two or three bearing points?

Part of my roof is made from studio trusses as shown in the picture. I'm trying to determine if any of the load from these trusses is borne by the highlighted wall.

The wall is built with 2x6s, but this may be because it contains a plumbing vent.

The architect has said that any bearing walls would be indicated in the plans, and this wall is not shown as load-bearing. Indeed, in our variant of the plan, this wall doesn't go to the ceiling, being only three feet high. (Edit: to be clear, the plan for our variant of the house shows the wall as three feet tall, but it was built full-height, and with 2x6s rather than the 2x4s shown here.)

Still, it's worrying that these trusses all touch a heavy wall that goes all the way down to the slab. Can anyone tell for sure if this truss has two or three bearing points? 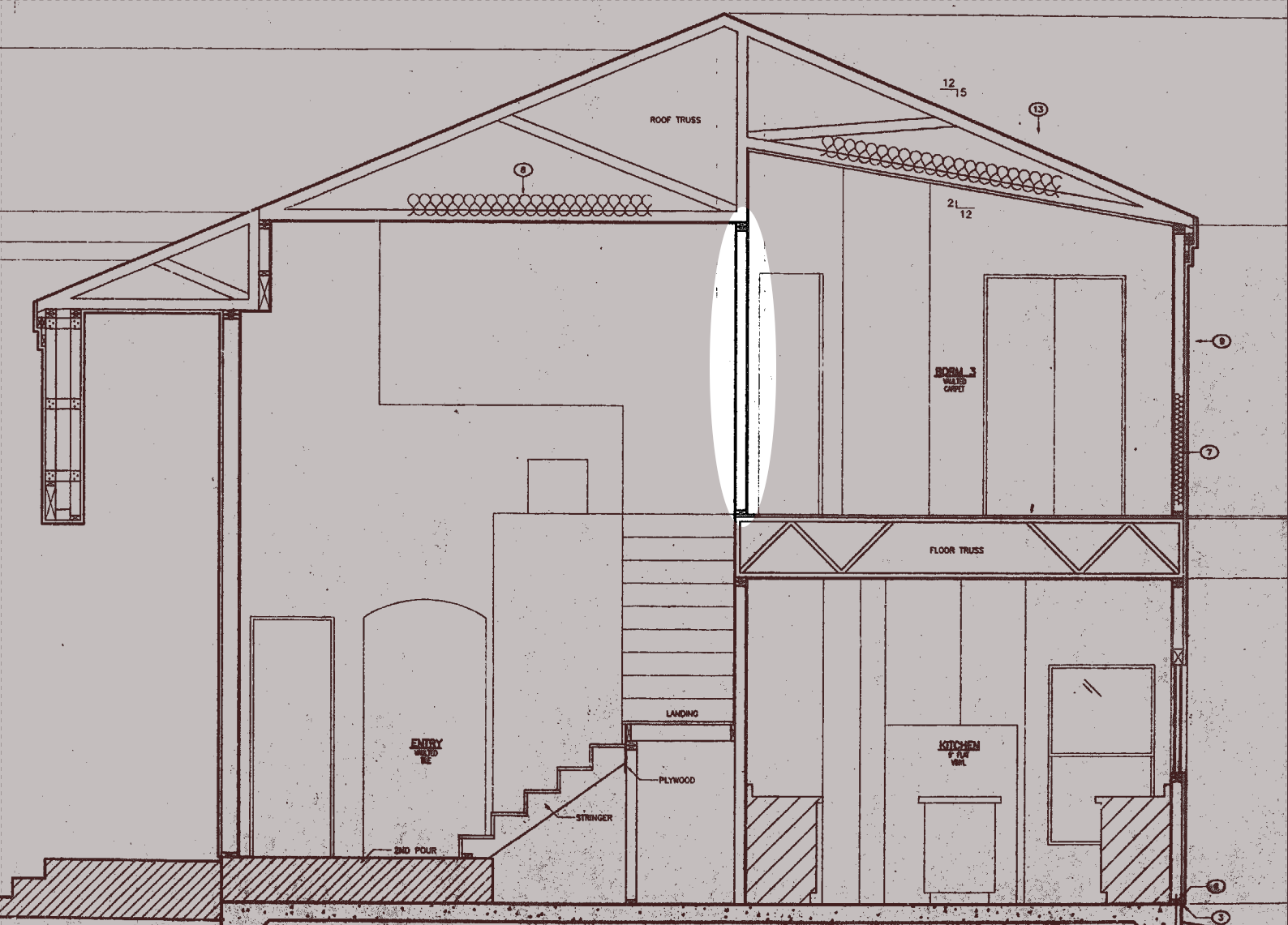 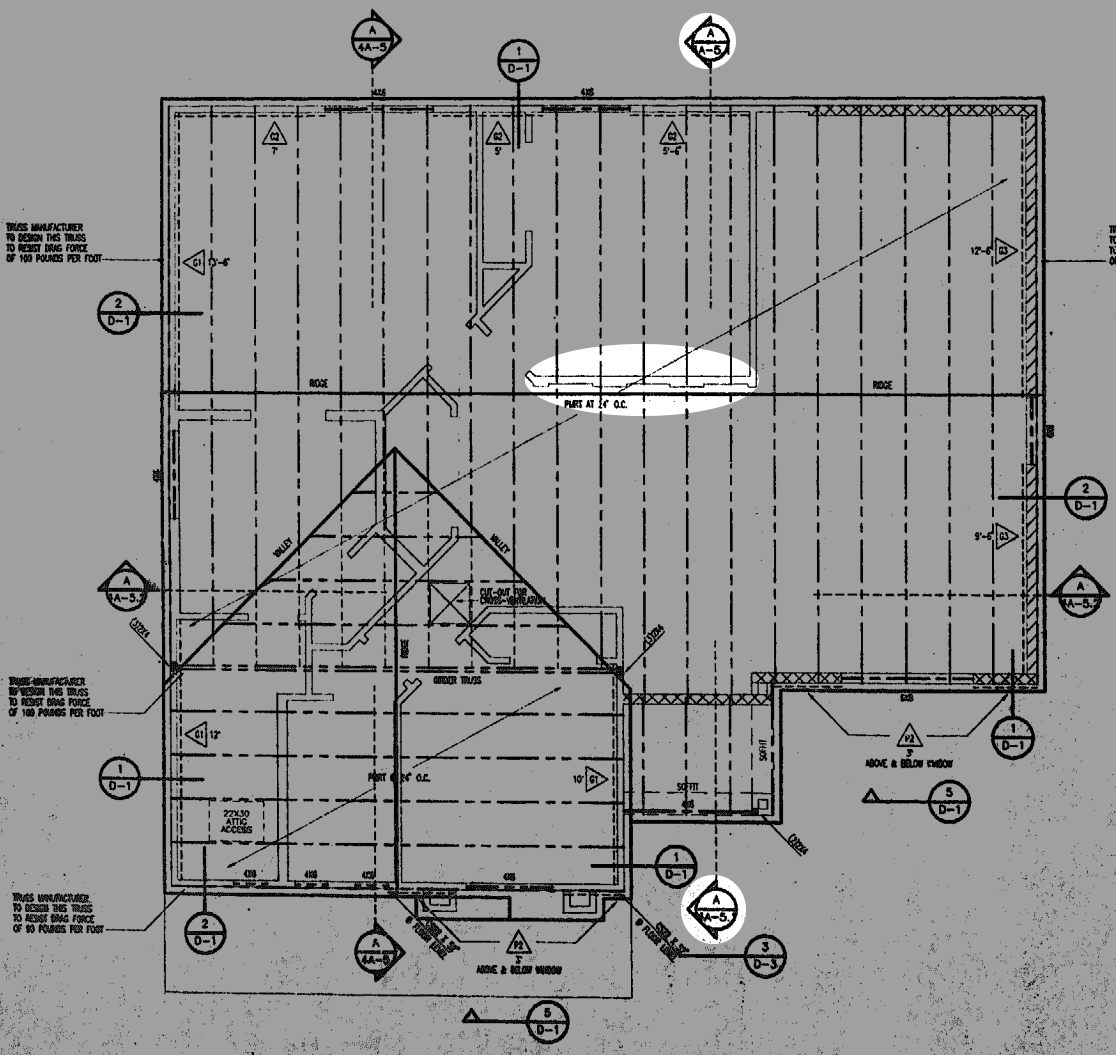 I’d be surprised if it isn’t a 3 point bearing truss and the center wall isn’t a bearing wall, because: 1) wall was designed as 3’ high but built full height, 2) wall was not shown as “bearing wall” but wall shown as 3’ high, 3) truss bearing on “Jack trusses” on left side of drawing, 4) vaulted truss does not have thrust brace connected to left side truss.

1) If a wall is changed during construction, it’s usually for a reason. Here, it appears it could be changed easily because the first floor wall and the second floor wall align.

2) Because the wall was NOT shown as a bearing wall (as you say) and the wall was originally shown as 3’ high, any change is due to on site conditions and specific construction procedures. That is to say, the truss manufacturer probably notified the architect and owner that they COULD build the truss as shown but at a greatly increased cost. Architect’s design ideas often are changed due to cost, etc. (value engineering).

3) The connection of the truss on the far left is highly unusual and gets extremely complicated with a 2 bearing condition. (Is it really constructed like that?)

4) If the trusses are really constructed as shown, the center wall becomes more important as a bearing wall, because it does not have a diagonal thrust brace at the bottom of the vaulted truss where it connects to the truss on the left.

A simple check (because you can’t see the footing) would be to see if the wall on the second floor continues (and the vaulted truss continues AND the wired connection on the far left continues.) If you can look in the attic, you will probably find that it’s 2 trusses.

Remember, many adjustments are made “in the field” during construction due to cost, ease of construction.

It is unlikely that a residential truss has a load bearing center point unless it was carrying another truss load and being used as a girder. That doesn't appear to be the case. It appears that the truss was too low once it spanned the high ceiling area and the clearance was elevated to create a vaulted ceiling at the top of the stairwell. That truss appears to only have two load bearing points. Trusses are also marked at the load points when manufactured. I would still call the architect to verify.

This is definitely a 3-bearing truss and it requires the support point in the middle. The reason I can see that is because a two point truss is going to have a lot of tension in the lower chord. The lower chord needs to be a continuous tie from one outer bearing point to the other outer bearing point to hold the walls from pushing outward. At the midpoint, you can see that the bottom chord of the right vaulted side connects to the midpoint of the center vertical member. There is not a bottom chord connected at this point tying to the left bearing point to counteract that pulling force. Therefore, that vertical member would be under a large bending force if there wasn't a vertical bearing point below it. With the center vertical bearing point, the right side and the left side effectively act as their own independent trusses each with their own bottom chord from the midpoint support out to their corresponding outer supports.

Not the answer you're looking for? Browse other questions tagged framing roof structure truss or ask your own question.

0
Maximum span/strength of Howe Truss
2
Why are some of my trusses nailed to interior wall top plate?
0
Is this wall in my kitchen load bearing?
6
Can I partially suspend an angled climbing wall from my garage trusses?
1
Sistering 2x8s to 2x4 truss system for vaulted ceiling?
3
Is it OK to drill one or two 2 inch holes into a load bearing header in my basement?
1
Adding strongback bracing to an existing floor truss
1
Is a header needed for this load bearing wall?
0
Max span on 2x4 truss
3
Is this Scissor Truss for cathedral ceiling with drop-down for typical 8' ceiling load bearing in the middle?