I noticed water leaking out from under a toilet, so I decided to take a look, hoping that it was something simple (wax ring or even a hairline bowl fracture). The toilet came out with (almost) no problem -- the nut on right-hand closet bolt got tricky when the bolt started spinning on me. Once I got the toilet off, I found out why the bolt was spinning: the flange was mounted (IMHO) incorrectly -- with the closet bolt slots closer to 11 & 5 o'clock than 9 & 3 o'clock. I also noticed that the slots at 9 & 3 were cracked, probably from being tightened down during the previous installation.

This picture got rotated; as-is, this would have been the left side of the toilet as you approached it (the tank attached to the supply line you see). 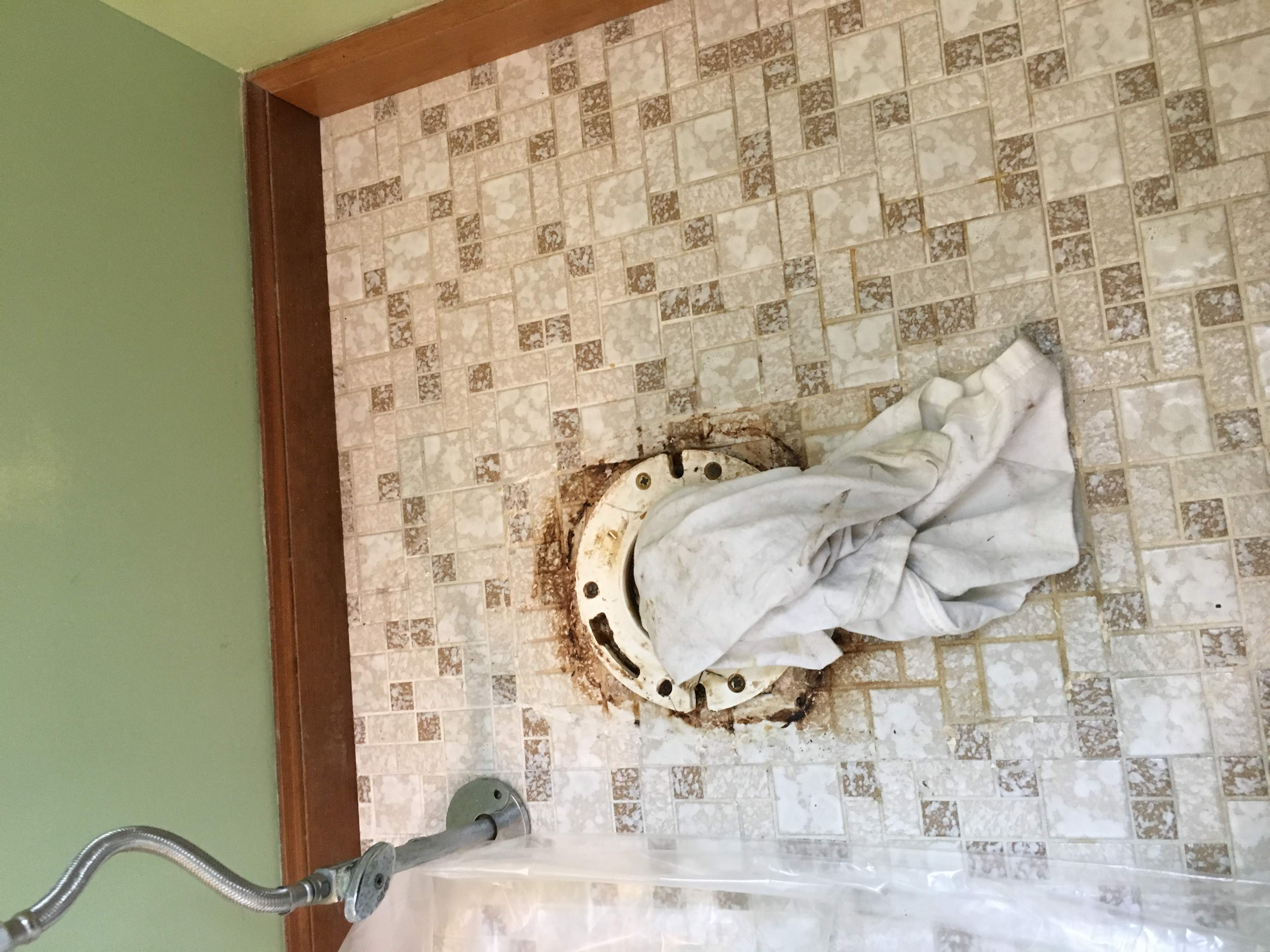 This is where I probably should have stopped and used a "covering"-type repair flange on top of the existing one, now that I know about them, but it bothered me that this one was put in incorrectly, so I started to take it out.

I have access to the under-side, where I see what looks (to me) like an extender that's mounted on top of the elbow. Neither the flange nor the extender rotate by hand, so while I'm suspicious of the previous work, it does seem like they glued these together.

I've made a bit of a mess, so I'm asking for smart/experienced approaches to completing the removal and replacement of this flange. 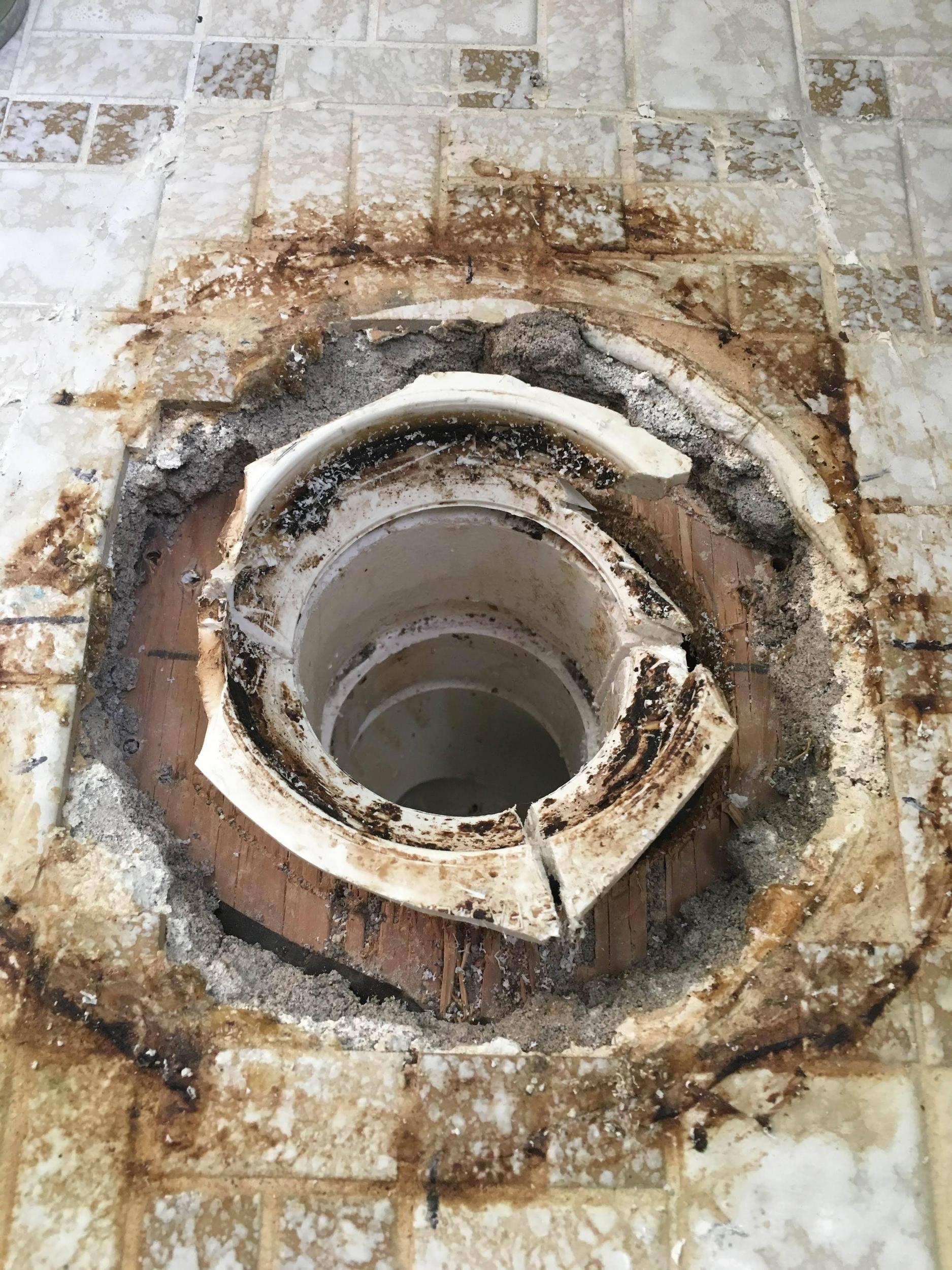 And closer from the top: you can see the damage I've done in trying to get it out so far -- this one also got rotated counter-clockwise when I uploaded it so the sink drain and tank supply line are at 6 o'clock from here: 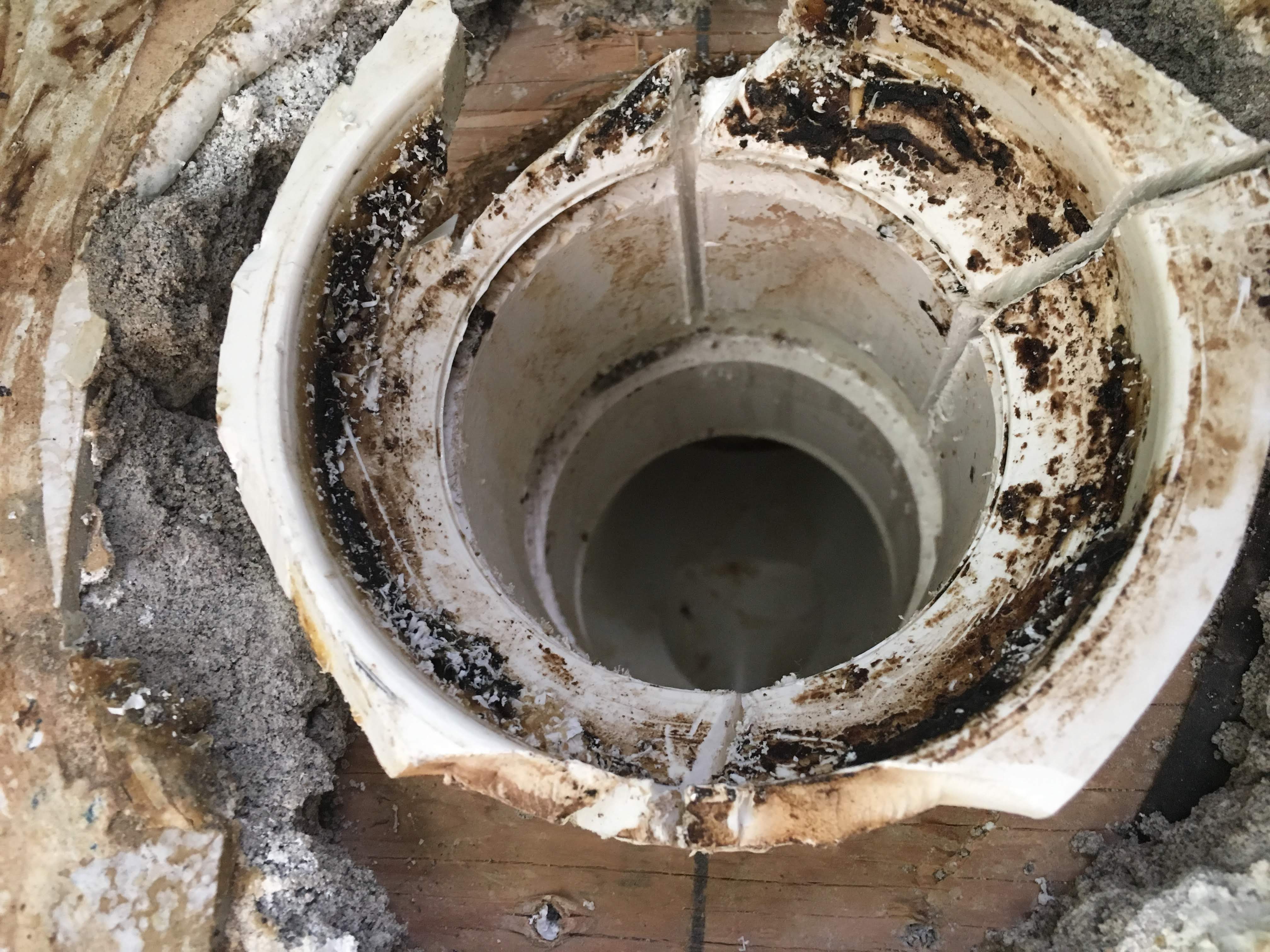 and here's the view from the bottom: 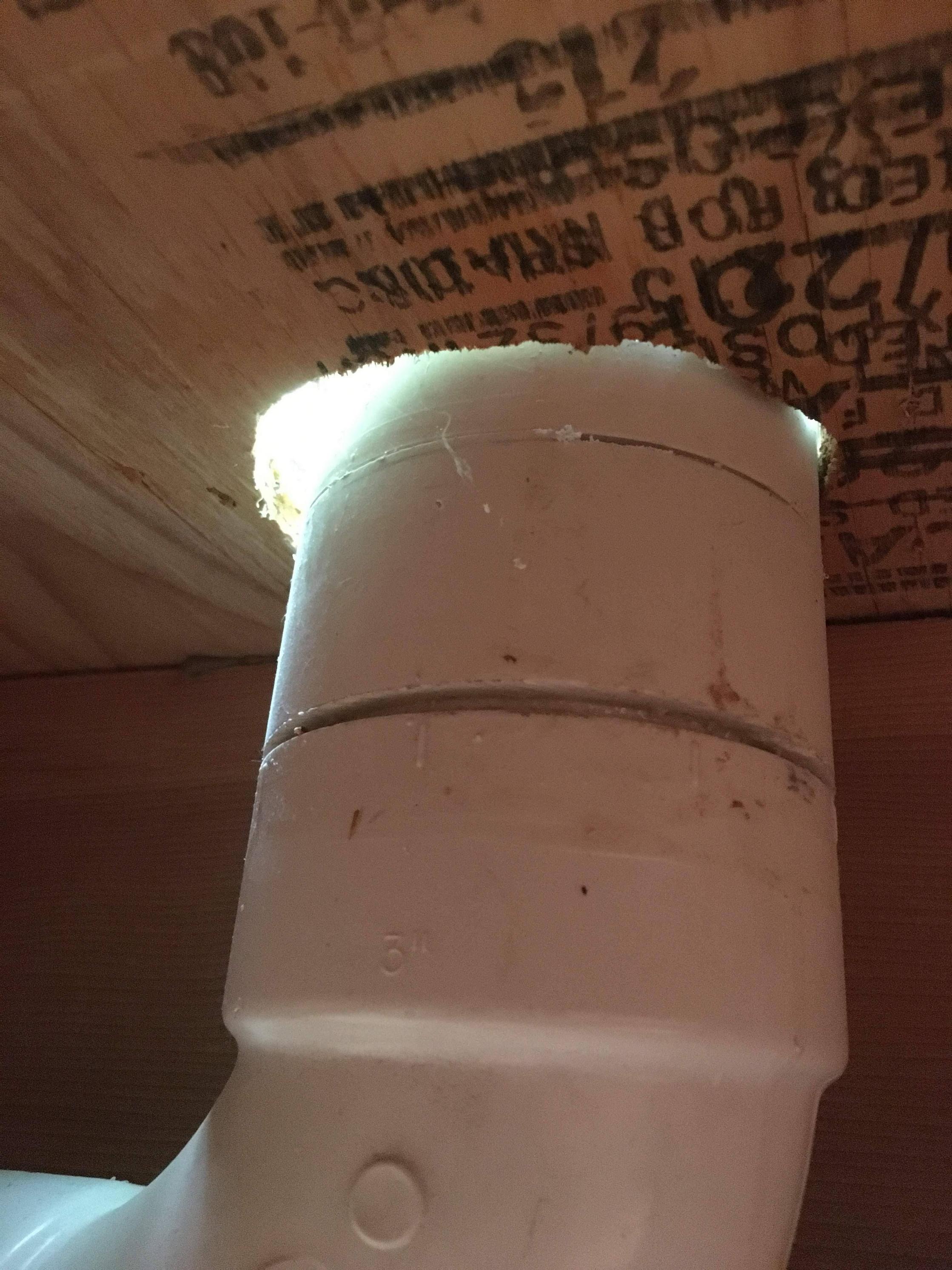 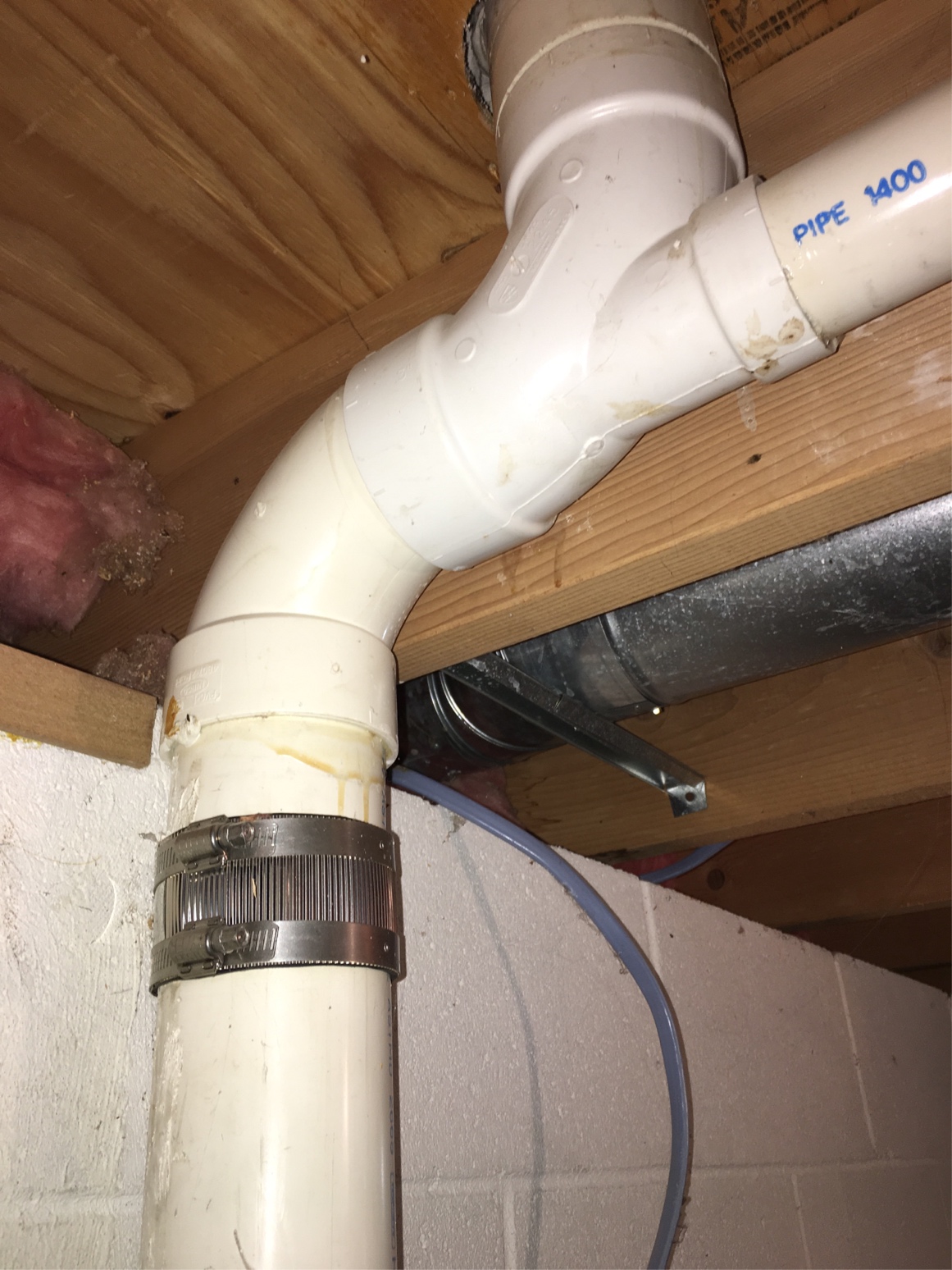 I'm in the USA; this is my first under-the-floor plumbing adventure.

I found this similar post on DIY with a comment from Ed. I don't have a sawzall/oscillating saw to make a good horizontal cut, nor any way to make a good chamfered cut, so my suspicion is that it's time to call in a professional, but wanted to see if there were any other options before throwing in the towel, since it's already being put to use!

There are bits available that will drill out the interior part of a glued in joint. The pipe that goes into the 3X3X2" wye pipe could be drilled out using this. 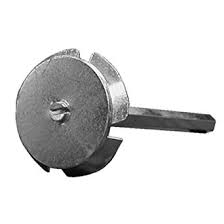 Then glue back in what you need to get the flange in place.

A simple hack saw or even a hand saw for wood can cut that pipe then use a utility knife to chamfer the inside. Plastic pipe is not that hard you can cut and assemble without glue to make sure everything fits once happy glue them together.

I know this is an old post, but now might be a good time to visit the flange display shelves of your local hardware store. There are pieces to replace sections of flange lips, flanges that fit over and into old flanges, metal flange lips, flanges that fit the outside of plastic pipe, cast iron flanges, etc. There are actually specialty hole saws to remove flanges and some diy videos on making same...there are also specialty pipe cutters as depicted above. I would avoid busting out the flange as you did...in the future. The diameter of the pipe (3"? 4"?) is good to mention for future posters with similar questions.

Had to replace one recently that had no concrete below it for anchoring purposes.

In the end, my lack of experience along with the inconvenience of being "down" a toilet with kids in the house led to a call to a local plumber. I wasn't home during the repair, so I can't say exactly what was done, but I "lucked" out in that the toilet continued to leak even after their repair. I again suspected a crack somewhere in the bowl, so I purchased a new toilet and replaced it. I can't find a crack in the bowl, so perhaps one of the tank bolts had a leak that found its way to the bowl area -- I'm not sure.

After removing the old toilet, here's a shot of the plumber's repair (from above): 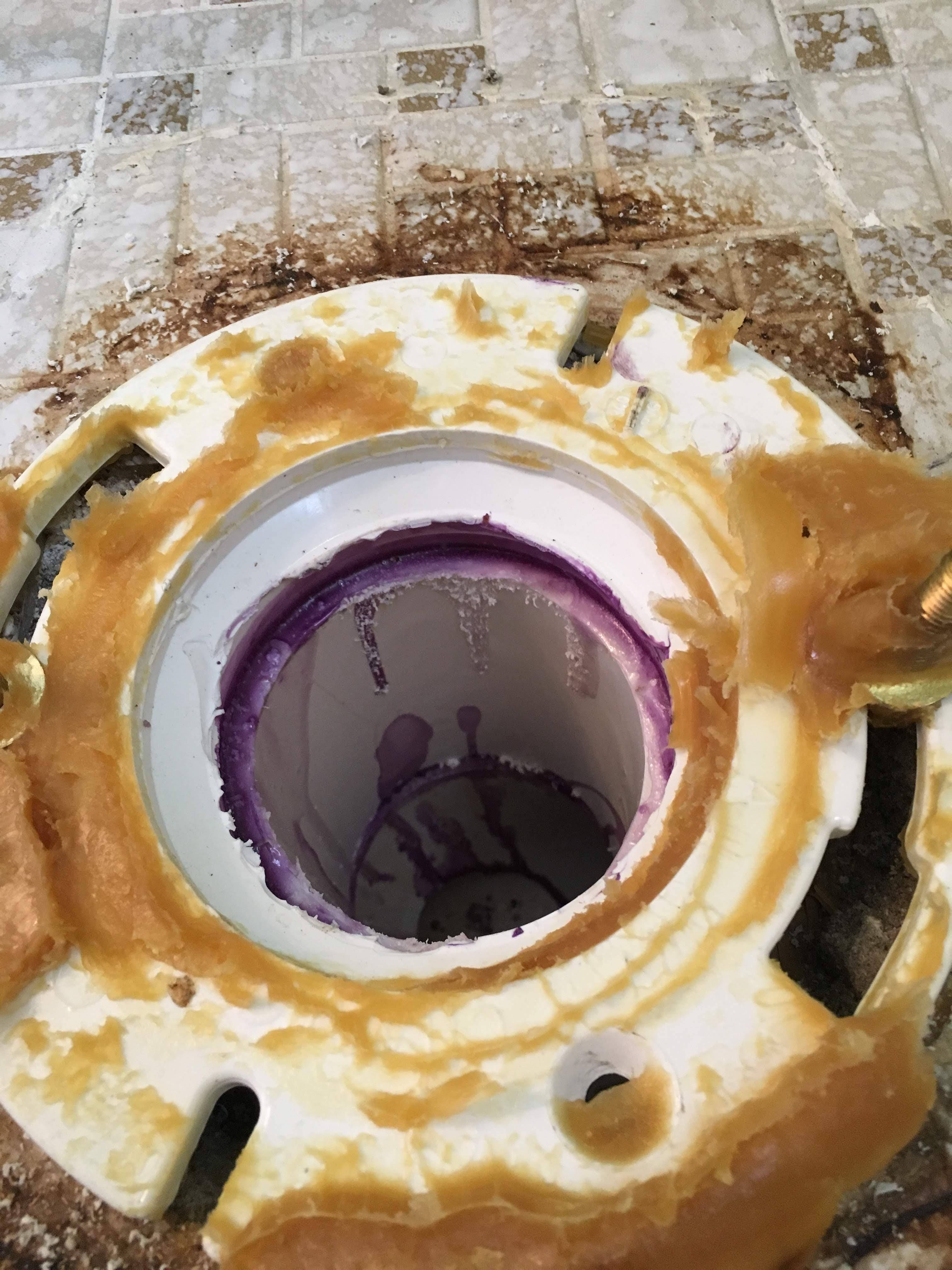 ... and job finally complete! Only took one more trip to the hardware store for a hacksaw to shorten the closet bolts for the caps. 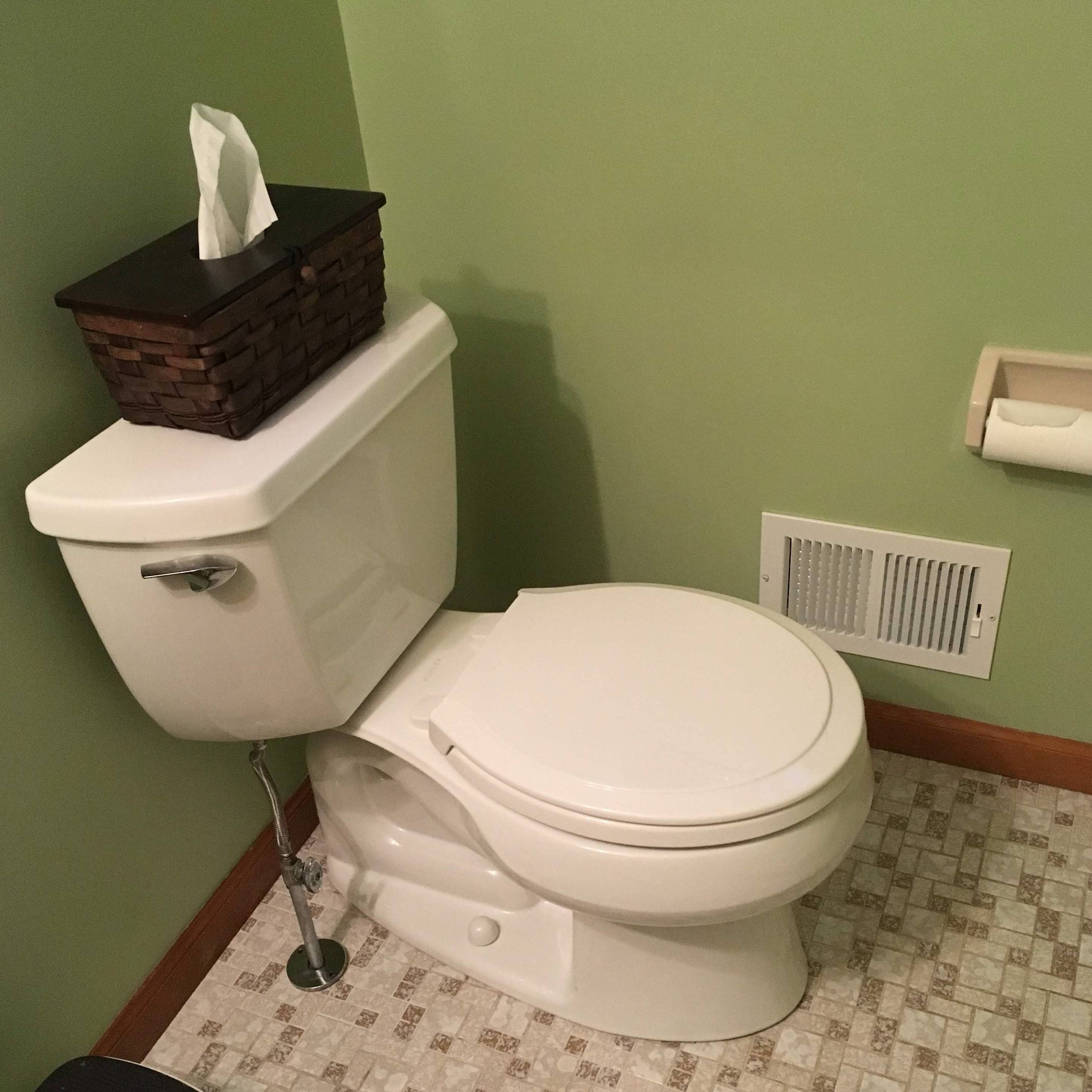 Not the answer you're looking for? Browse other questions tagged plumbing toilet pvc or ask your own question.