What is the term for an adjustable spanner with the opening at the side?

I have in the past used (but do not currently own) adjustable spanners where the jaws are on the side of the handle so the nut enters from the side. Similar in layout to a pipe wrench but without the looseness and serrated jaws. I see these pop up in restoration videos which suggests they may be an older style.

These spanners can be handy because they often have a wide range of size adjustments and can sometimes get into tight spaces more easily than the current style of adjustable spanner that dominates nowdays.

Can anyone tell me if there is a specific name for this style of spanner and whether they are still made.

It's a monkey wrench, if you can believe that, or a coach wrench.

Adjustable coach wrenches for the odd-sized nuts of wagon wheels were manufactured in England and exported to North America in the late eighteenth and early nineteenth centuries. They were set either by sliding a wedge, or later by twisting the handle, which turned a screw, narrowing or widening the jaws. In 1840, Worcester, Massachusetts knife manufacturer Loring Coes invented a screw-based coach wrench design in which the jaw width was set with a spinning ring fixed under the sliding lower jaw, above the handle. This was patented in 1841 and the tools were advertised and sold in the United States as monkey wrenches, a term which was already in use for the English handle-set coach wrenches. 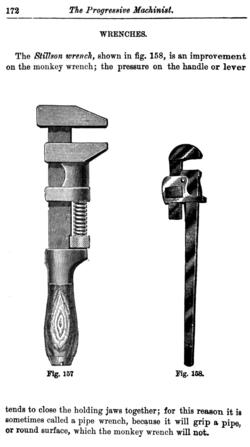 And no, it wasn't named after a guy with a funny surname.

Not the answer you're looking for? Browse other questions tagged tools hand-tools or ask your own question.