Should my sump pail be perforated?

I'm replacing the sump basin/liner in my home which is currently a perforated 5 gallon bucket surrounded by gravel. I have an interior drain system that has two pipes terminating into the gravel pit area (but not into the basin itself - the water dumps into the gravel and through the holes in the bucket). We have a high water table and the sump runs every few minutes on normal days.

I really appreciate any advice you can give. Thanks!

Oh my - two very different responses! My thought was that if it the liner is sealed any additional water pressure would result in the perforated drain tile doing it's job "better" and bringing the water to the pit. However, the response from Ed was exactly what I'm concerned about (the ground water causing the floor to leak).

If I use a perforated bucket it would surely always have water at the bottom because of the high water table. Would it be okay to elevate the sump in the pit (using something like pavers) so that it's only emptying to a depth around 6" below the slab? The problem now is it's constantly cycling to remove ground water that is over a foot below the slab. I'm using a Zoeller without an adjustable float, so raising the pump itself is the only thing I can think of.

Thanks again for the responses.

Edited to add photo of current setup. The current bucket top sits a couple of inches below the top of the slab... when I install the new basin I will make it level with the slab and fill with concrete. 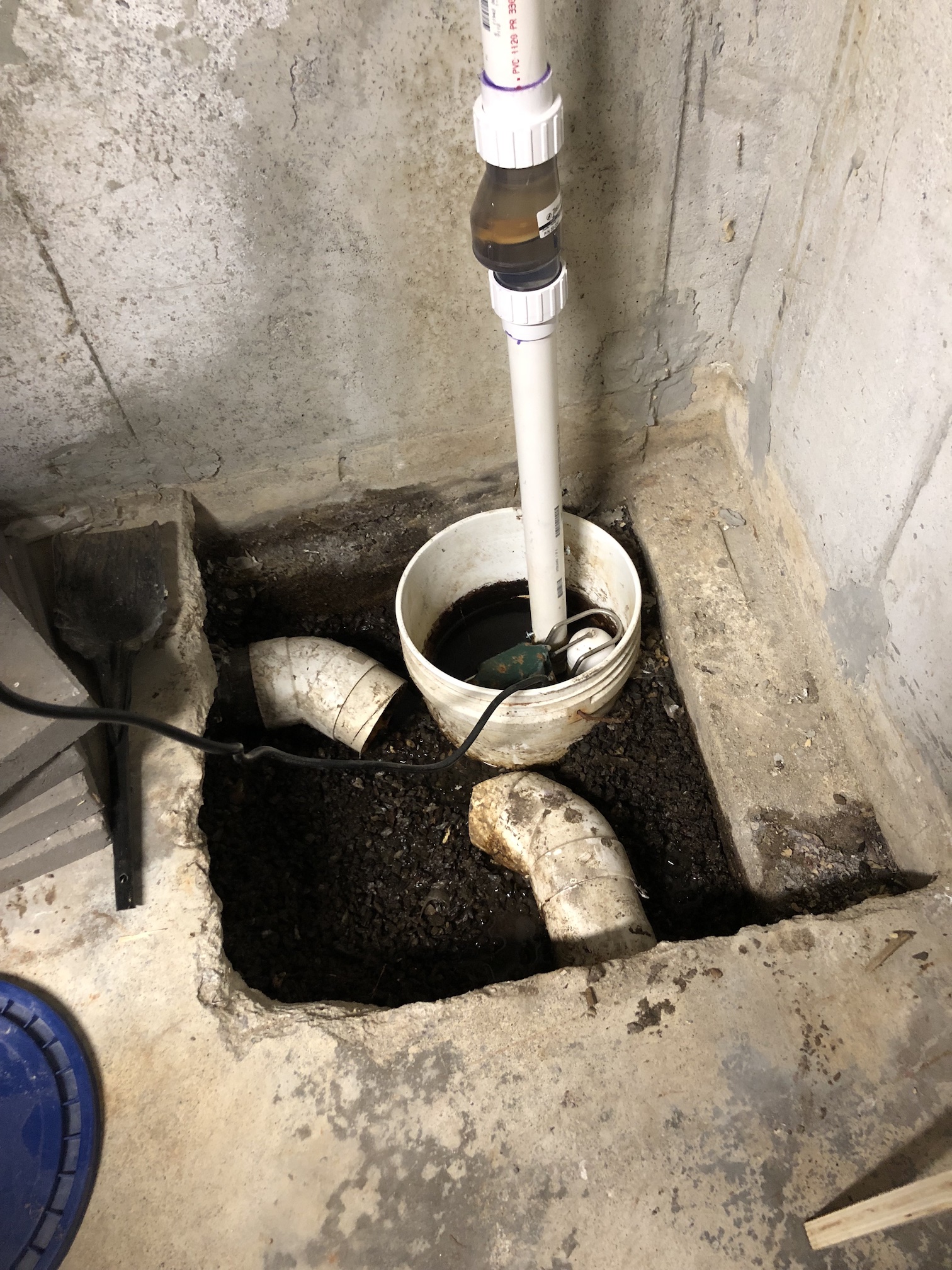 I've installed many drain tile systems in Minnesota, and none of them used perforated pails. Really, you don't want to be collecting water from that far below your slab (and typically don't need to). All drainage should occur in the drainage medium via the tile.

If the drain tile (pipe) is perforated, there's no reason to have holes in your bucket unless you have a particular need to drain that deep. You're more likely to get sediment if you collect from down there as well.

Response to your answer/comment:

Your drainage medium (the clean rock I assume is below your slab) acts as the drainage path to the drain tile, which is simply a collector. If they're doing their respective jobs, no significant amount of water is present at the slab underside, and the question is rather moot. You don't need perforation unless you don't have drainage media under the slab, and if you don't, a perforated bucket only serves to allow drainage in the immediate vicinity of the bucket anyway. It won't keep your basement dry throughout.

The perforations are to allow ground water into the pit. If you seal this up your floor and walls will have more water pressure on them and may start leaking. Make sure to use a perforated liner.

You're in a high water table area so I'll have to defer to the design of the system as is, as I picture it in my head (because I am not in one. See the old answer at the end, and the comments).

Assuming they'd reach into the new sump, cut holes for the drains but do not perforate it. If they aren't going to make it, either extend them or do perforate it.

Get a separate switch and put the pump as far down as it will go and the switch as high as possible, for less cycling. But put it on some bricks to prevent it sucking in sediment.

Should my sump pail be perforated? That depends on where your water table is.

Mine's low and my soil is clay, so I would perforate it.

Your water table is exceptionally high, so I wouldn't.

The thing you're complaining about is it cycling. It's cycling because it's in a 5 gal bucket, with an integral float.

A larger and sealed cistern, with a pump with a separate switch, wouldn't cycle so much.

A five gallon bucket for a sump in an area with a high water table... seriously? There's your problem right there.

5
Sump with no pump!
2
How do I install this sump basin?
5
How to seal sump pit with removable cover
1
Water coming in BELOW sump pit inlet pipe! Is this normal?
2
Should I be concerned that my sump pail is regularly half full?
1
How can I effectively drain foundation water along the sump pail location?
1
How low should I drill holes in my sump pump basin? Should I drill them at the bottom?
1
Does my sump pump evacuate water slowly due to a perforated pail?