Perpendicular set studs sometimes shift during toe nailing to flat plates, top and bottom. Is there a way or a tool to clamp 2x4 perpendicular?

Measure and mark your stud placement on both plates and make sure the studs are on the marks when you nail them.

Generally, I lay the plates next to each other with the ends aligned. Then mark and strike the line across both simultaneously. Don't forget to mark which side of the line the stud goes on.

I think what you're asking about is toe nailing 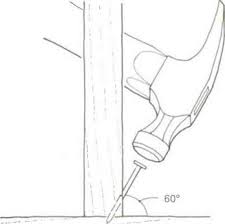 It's a very basic method of nailing things together but there is some knack to it. The stud does want to move laterally from the intended spot. There are a few ways to counter that.

The name "toe nailing" comes from maybe the most basic way to keep the stud from slipping: 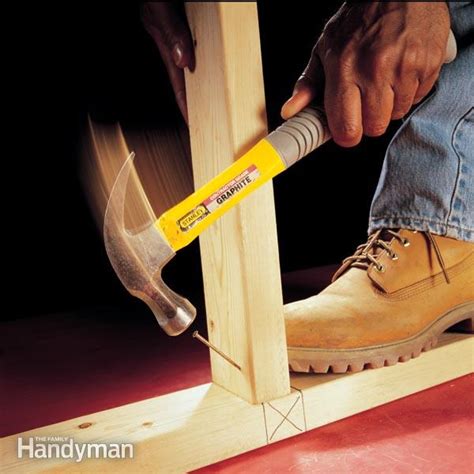 That kind of works, but it's pretty awkward and there's lots of situations where you can't get set up that way.

It's simple enough to build a jig to hold the stud in place. The one pictured below would be cut to 14.5" for studs spaced 16" on centers. 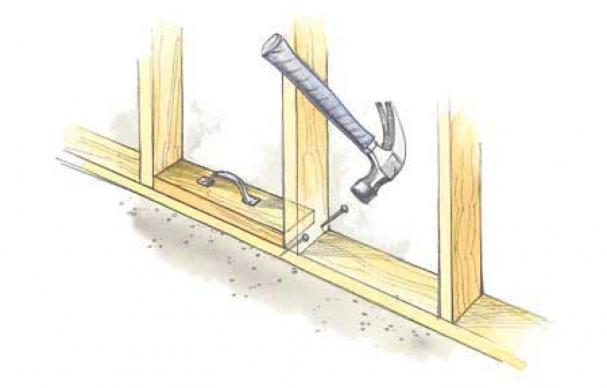 Of course that won't work where the studs are not spaced at 16".

You can find lots of other jigs for toe nailing but I personally just start nailing with the stud a little off the mark and let it slip into place as I nail. This is not a perfect method but with a little practice it's good enough. If I am struggling I'll start a nail into the plate on the mark to keep the stud from slipping - just a half inch or so in - and remove it after the other side is nailed.

Not the answer you're looking for? Browse other questions tagged carpentry lumber or ask your own question.

4
How to install coat hooks securely when holes don't line up with studs (batten depth?, length of screws?)
2
How to cut 45 angles in quarter round shoe molding with circular saw?
0
Install a recessed medicine cabinet with stud problems
0
Trimming or spackling the edge of a tile schluter to drywall (Large Gap)
2
Can I use LVL 2x4 outdoors (pergola roof)
0
What's the right type of lumber to construct a small TV platform?
0
Mark location of holes with two boards fitted together
3
What is the point of this doorway “header”, and can I simply remove it?
2
Is it better to pull old nails or hammer them flat?