How can I ensure an angle valve points in the direction I want it to? [duplicate]

This may sound silly but after a few home improvement projects involving minor plumbing tasks (like changing faucets) this has always bothered me.

I'm going to talk about the specific example of an angle valve since it's the one I've faced more often, but this could apply to any kind of plumbing accessory that you twist on until its tight.

I've included an image below of the kind of thing I'm talking about in case the translation I googled is off.

In Europe at least, usually you have a shut-off valve like the one in the picture on every water point in the house. In my case, in the house I moved in, I had some very crappy ones with plastic handles that broke with time and didn't serve their purpose anymore (you couldn't use them to shut the water without using pliers)

When installing the replacement it bothered me that I could not get it tight and pointing to the direction more convenient to then connect it to the appliance/faucet.

When I faced this, first I tried starting to twist at different points but found that they only engage at very specific points which makes sense and shows the same result (or same 2 results in some cases) no matter where you start. Then I thought just to tighten it to the maximum then go back enough until it's in the position I want it to be, but even when properly using Teflon tape around the grooves I've found that it needs to be absolutely tight to not have any sort of leaks.

Is there any trick to it? 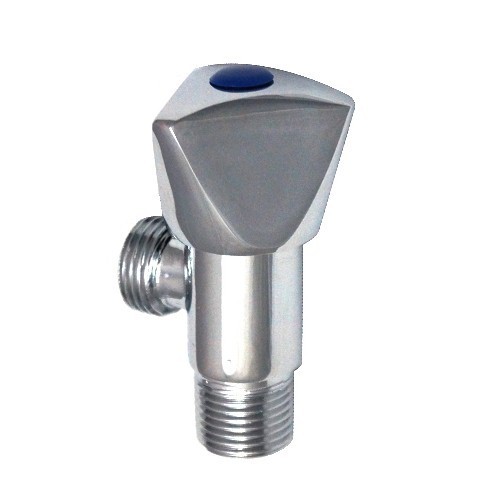 It isn't a game of chance. A few wraps of PTFE (Teflon) tape give you the flexibility to stop at an appropriate angle. The characteristic compressibility of the tape means you don't have to bottom the joint out to make it seal.

If you find that the joint bottoms out before it feels snug enough, start over. Remove the used tape and apply a few more wraps than last time.

4
How can I achieve the correct garden tap orientation when threading it in?

2
How can I attach an under-sink water filtration system to the water line?
2
Why is my main water supply shut off valve leaking even while closed?
1
Connecting a water heater, what kind of fittings, valves, and adapters?
1
Can anyone ID this pipe?
0
Replacement water shut off valve stem is too short to protrude past the wall board
3
Do I need to angle/pitch pex tubing for draining in the winter?
0
Toilet intermittently continually fills
1
No toilet shut off valve in my NYC apartment
1
How do I use this valve properly?
2
Need an alternate way to install hand-spray bidet on my toilet - can I Tee off the 3/8th input valve?