Does corroded copper wiring have a reduced current capacity?

I am fixing the attic outlet right now. The 2nd wire has the same darkish look see https://imageshack.com/a/img924/2614/9a4Xj4.jpg (click zoom to enlarge it). Notice it is only the left wire that is darkish while the right wire is ok. Previously the old owner may either have overloaded or short the wires because it's cut in the middle of the feeder at the slab so only the outlet is working and the rest are disconnected. Now if I can still use it.. should I sand paper it or would the darkish cooper still have full conduction when connecting an outlet to it?

I found one of my wires going into one room has this corroded look (it's just example in the net similar to my actual wire). Was it caused by overcurrent? But overcurrent should burn the wires and not leave it intact, isn't it?

Since I can't insert new wires into 10 meters length to the room with many unknown bends. How many amperage in percentage can it still take compared to original one (it's AWG 10 with 60C rating of 30A)? How many ampere before the insulation of the following totally break down? 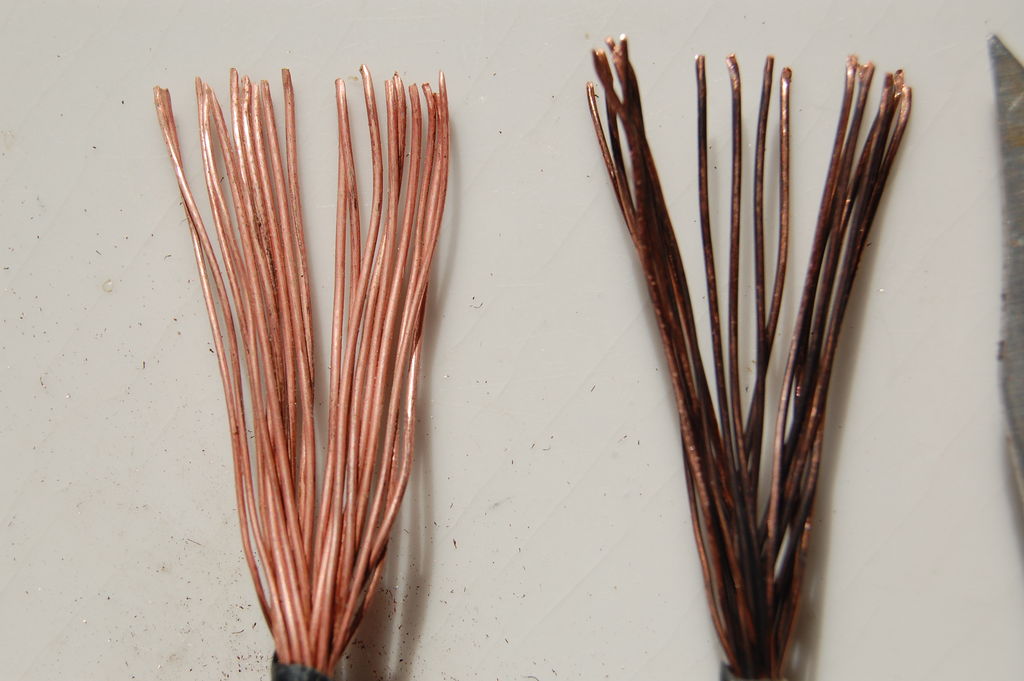 What you call corrosion is oxidization this won't hurt the ampacity of the wire, I would want to inspect the system because this is usually caused from being overloaded or getting wet being the causes I have found in the past, a loose connection can also cause over heating but in those cases there is usually some pitting from arcing at the contact point but I don't see any evidence of that. If the insulation is still in good shape the wire should be fine at its listed capacity.

Added to cover ok comment / question: I have a thermal camera that I check panels with, when I find "Hot" temp wise wiring it is usually below 90c. I have seen number 10 wiring loaded well beyond the standard limit for residential in motor controll centers closer to 60 amps with no insulation damage on thhn. When the wire gets hot enough to deform the insulation it is hotter than 90c. At first with a severe overload the wire heats up the insulation starts to smoke and melt but it usually won't catch fire unless there is a splice and at the splice it may get hot enough to catch fire but the wire is "glowing hot" . When wiring gets this hot it usually shorts in the cable hot to neutral or ground at a bend or this is what I have found on several occasions. When the wiring is overloaded severely I think the Inter action with the thermo plastic accelerates the oxide layer as I have seen equipment that was close to 30 years old with bright shiny commer a inch or 2 back under the insulation. High humidity will also cause the oxide, I have seen this in multiple areas and work environments. I just re read your original post and it would be helpful if we could see the condition of the insulation (I was thinking that was a photo of your wire). If the insulation is deformed at all it should be replaced as a best practice, since you don't want to replace it it should be checked with a megger (high voltage resistance meter) at 500v checking between hot and ground, hot and neutral, neutral to ground (both ends disconnected) and the reading should be in the gig ohm range. You don't want to find out the hard way that your neutral to ground has shorted and someone touches the metal frame of a lamp, appliance whatever and gets a bad shock, or worse.

Copper oxidizes when exposed to oxygen in the air.
This is normal.
Your wiring is still able to carry 100% of its rated current.

The end of your question makes me believe that you're confusing voltage (related to insulation breakdown) with current (related to 'ampacity').
Even if the wiring had corroded to the degree where it's current-carrying capacity ('ampacity') was reduced, this would have no direct effect on the insulation on the wires still being able to prevent arcing & short-circuits (breakdown).

That is the normal copper patina that makes it such a magical rock.

Metals in metallic form are almost unheard of in nature. Your garden dirt is full of aluminum, just like dirt from the caveman era, but aluminum burst onto the scene only last century because extracting it from oxide is hard. Almost all "clumps of" metal have fully oxidized over the billions of years since the planet acquired its atmosphere. Case in point iron, which is only found in oxide form.

However, copper is one of very few exceptions. A lump of copper does oxidize, but the resulting compound becomes a barrier for further oxidation, protecting the remaining metal. This is called a patina. The patina is only molecules thick, so it does not remove a measurable amount of metal. That is how intact copper nuggets could be found by Man of antiquity, resulting in it being the first worked metal.

So unless your copper was exposed to a harsh environment that attacked the patina itself, your wire will be intact for another 5 billion years.

1
Protecting multiple outlets with one GFCI; is it possible with this wiring scheme?
1
Correctly wiring GFCI with two hot lines
1
how to add an overhead ceiling fixture to a switched outlet run
3
outlet not working but grounding screw is hot
1
Grounding issues and ground tester
1
How many subpanel breakers can a single piece of main breaker/bus support?
3
Can I do a 125A subpanel feeder with slightly-larger-than-#3 wire?
4
How many wires can safely be secured in a Marrette 33 wire nut?
0
Open Neutral Circuit yet all circuits outlets and wiring appear connected
0
Challenging wires in an outlet