Would increasing pipe size just after the meter give better flow without increasing pressure too much?

I have a wife and 5 kids. Three of them are teenage girls, which means I hardly ever get a chance to shower. I wanted to put in a second bathroom to help fix this. I spoke with some local plumbers and they said that I should just cut the 1/2 copper after the meter and replace with 3/4 pex. They said it would give much more flow so I wouldn't have to worry about water pressure dropping if both showers were being used at the same time. The meter is 5/8 coming in and then 1/2 after the meter.

The problem for me is that I used a pressure gauge and it said that my water pressure was 84 psi. My research on the project seemed to indicate that the plumber was wrong. Increasing the 1/2 copper to 3/4 pex would increase pressure and it is already too high.

Unfortunately, I already purchased all the supplies to convert everything over to 3/4 pex. I seem to be fixated on this project. Having a hard time thinking about anything else but don't know what to do.

I fear that 1/2 copper will not provide enough flow to cover two showers at the same time. I don't think 3/4 pex with a pressure reducing valve would help as it would just reduce the flow to less than what I have now. I can't see that having the city put in a 3/4 meter would help if pressure is too high with 1/2.

How can I make sure that I can feed two showers at the same time?

I also need to install whole house water filters. Everyone complains about the water but they say anything over 75 psi should have pressure reducing valve installed. It seems to me that if I need to bring the pressure down to 75psi it would not matter if I did that with 1/2 copper or 3/4 pex as the amount wouldn't change after the reducing valve. Is this correct?

Would a 3/4 pex line with reducer to 75 psi provide any more water than 1/2 copper reduced to 75 psi? I would think that the amount of water would be the same as the flow is reduced to lower pressure either way.

UPDATE Thank you everyone for your thoughts and advice. Honestly, I'm still a little confused as I don't know if a 3/4 pex with pressure reducer to 75 PSI will offer any more water than a 1/2 copper line with pressure reducer to 75. My thinking is that regardless of pipe size, once it is reduced to 75 psi, the same amount of water will be available. I think you guys are saying that for some reason it will so I will book some time off next week and replace all the 1/2 copper with pex. I will do a homerun with 3/4 pex coming off the 1/2 pipe at the meter. Than branch off with 1/2 or 3/8 pex to all the faucets.

If I am wrong, please correct me. Otherwise, thank you everyone for your help.

Bad idea. Enlarging hot water lines will dramatically increase the inventory of water sitting in those lines. I.e. How much water is in the lines themselves.

I.e. How much cold water those hot water lines are full of, when you first turn on the shower.

I.e. How long you must wait for the cold water to be pushed through and become hot.

You reduce droops by not allowing any one appliance to suck up all the water, and you do that with flow restrictions. The single best thing you can do to ease water droop is fit low-flow showerheads. Of course, if it's a shower only, with no tub diverter, that means waiting even longer for initial hot water.

So for instance a 3/8" run just for each shower. A 3/8" pipe has 1/4 the inventory of a 3/4" pipe, so it warms up 4 times faster. Such a small pipe would make sense given your high water pressure and a low-flow head.

Here is something I did in a friends home. I/we changed the 1/2" copper water line to 3/4" copper from the water meter to the hot water tank and teed off any existing cold water supply lines. That way, both the hot and cold water lines would utilize more water while not spending a lot of money to replace all or even some of the individual 1/2" supply lines. It worked great and his wife and kids were happy. Now, if you want a good shower nozzle that is not expensive, try a Delta model 52650-PK which can be bought almost anywhere that shower products are sold. And, I might add that the girls will be happy. Mine was special ordered through Home Depot for less than $20.00. I have been using this style for 40 years. (check it out) As for the water pressure, There should be no problem with the pressure at 85# or even 100#. Mine varies from 70 to 95 psi during the day with no adverse effects and no PRV to screw with. The only water filter I use in my house is a whole house filter, mounted under the kitchen sink that has a charcoal filter to take out the bad taste of the city water, which is where we get all our "drinking" water. I replace the charcoal filter every 6 months. (my 2 cents)

I didn't read all the answers and comments but,

The pressure of the static system will not change due to the pipe size. A quarter inch line will experience the same pressure as a 1-inch line with all valves off at the fixtures. The difference between a quarter inch line and a 1-inch line is when there is flow, or dynamic pressure, you will get more pressure drop on a smaller line. Any devices or fixtures attached to your plumbing system that have a maximum pressure rating should have a pressure-reducing valve installed just for them as installing a pressure-reducing valve on your whole system will greatly reduce your flow. Three-quarter inch PEX is in practice of roughly the same size as half inch copper especially if you're using many fittings as they are smaller then the 3/4 PEX itself. As a matter of fact the Pex fittings have a smaller inside diameter than copper pipe but you do it being such a short piece it doesn't have an overall smaller than copper pipes effect. Home run systems work great it will however exclude any possibility of hot water recirculation. One thing nobody does with a home run system is Supply the Home Run manifold from both sides that way you always have equal flow I don't know why this isn't a requirement from the manufacturer.

This is a proper home run system 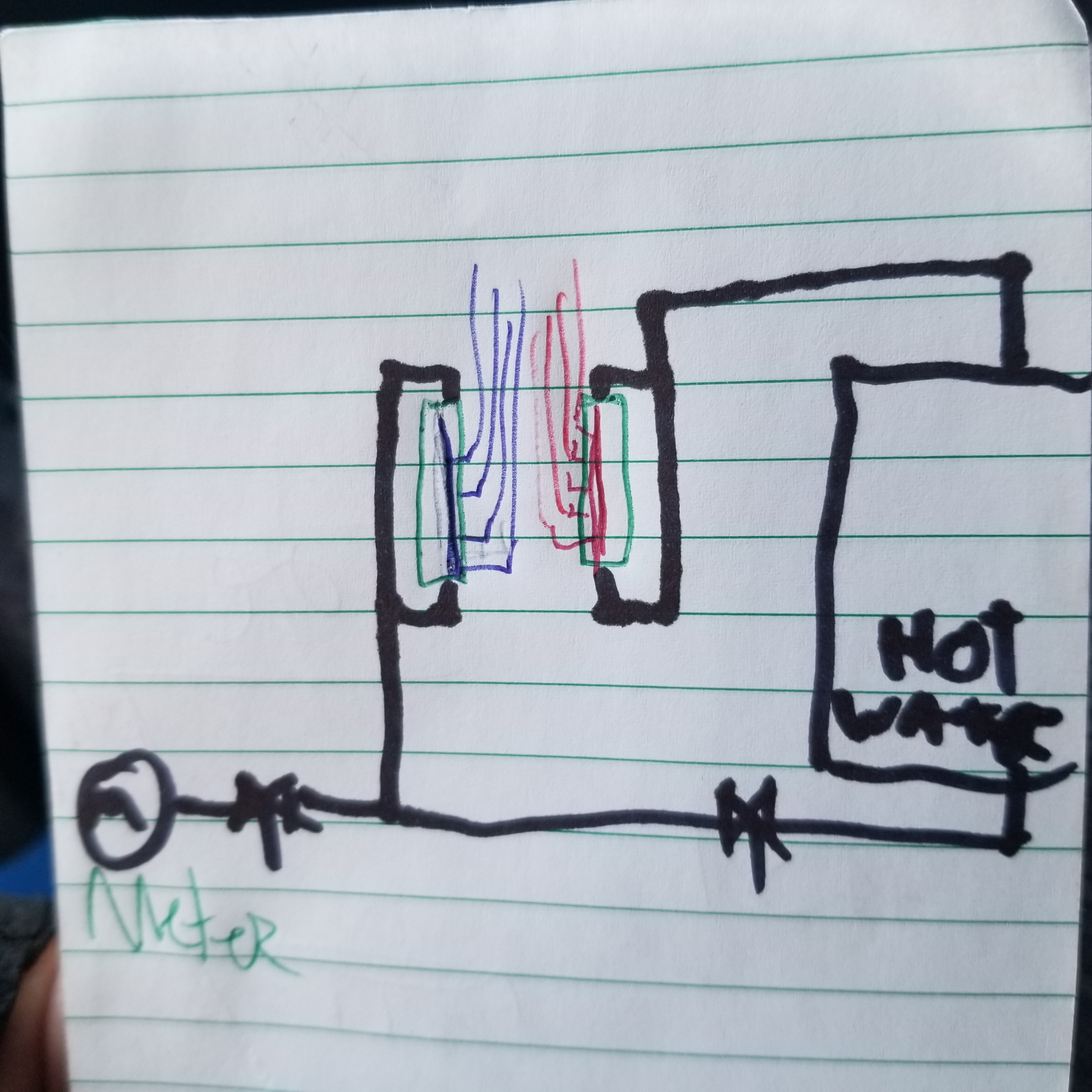 Poorly drawn in my truck while eating lunch.

Keep in mind that PEX-a has the same OD as copper and has a thicker wall resulting in greater insulation and will not sweat like copper. PEX-a is 3 times smoother than new copper which means water is moved at greater velocities, this helps to reduce the difference in flow characteristics when comparing to equivalent sized copper pipe and the slightly smaller ID of PEX.

That said, there are other factors to consider that can be hard to calculate precisely. One is how many fittings you have; since Pex fittings go inside the pipe instead of around it like copper, each fitting that you add when using Pex reduces the flow rate. Right angles also decrease the flow rate since water has to work harder to go around hard turns -- although here Pex can be advantageous in some cases because you can curve it around corners, whereas with copper you'd have to use an elbow.

The number of fixtures being served by your lines of Pex could also make a big difference. Ideally, you'd have a dedicated run of Pex (i.e., a "home run") going directly from the water meter to each bathroom. That would likely result in a much better experience than tying both bathrooms into the same line. Of course, running a dedicated line to each bathroom may or may not be feasible, depending on where the bathrooms are located and how many walls you'd have to cut up to do this.

The location of the bathrooms matters, too. If one is on the third floor and the other is in the basement, the latter might rob the former of water when it is in use.

The bottom line: Without a lot more data about the specifics of your situation, it's impossible to say for sure whether replumbing with Pex would increase volume. But it probably would, especially if you are careful to avoid unnecessary fittings within your Pex lines and you are able to do a dedicated line to each bathroom.

All this said, half-inch copper (and, for that matter, half-inch Pex) should be sufficient to serve two showers in most cases. I have a three-story house with three full baths that is plumbed with a mix of half-inch copper and half-inch Pex, and never have issues with the showers. But I also have a 1.5-inch line coming in from the street, which could be a factor. I wonder if your real issue is that the volume of water coming off the street is just too low; do your neighbors who have multiple bathrooms have any issues?

Plumbing code is a min 1 1/4" from the meter to the house. You can reduce it once it enters the house.75 psi is way to high. Your fill valves and water connections aren't equipped to take high pressure and they will leak.

Not the answer you're looking for? Browse other questions tagged plumbing bathroom water-pressure pex renovation or ask your own question.