How can I fill this gap between two areas of flooring 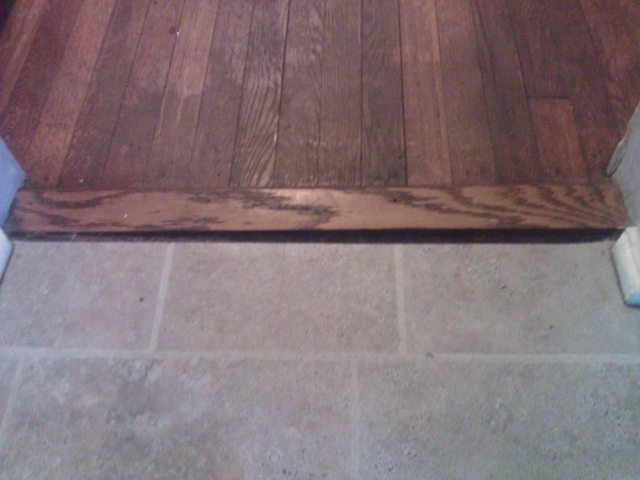 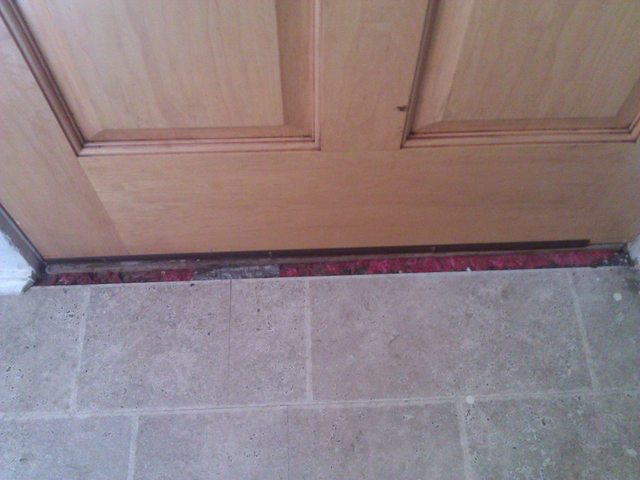 What is the best way to fill these gaps? I'm willing to live with some visual imperfections.

You could use a T-Moulding/Transition Strp

Are the surfaces the same level? If not, you could use a reducer strip

Upper Picture - there is a saddle, but it is not doing what it is supposed to do - transition fully from one room/floor to another. You could remove that saddle and get a wider one that covers the full gap. An issue may be the relative height between the two areas. If they are uneven, you might need to put a filler under the saddle that levels them. This should be a molding made of the same wood as the saddle and stick out slightly beyond the saddle on the lower side (maybe 1/2" to 1"). it needs to be tapered to avoid a sharp transition.

Lower Picture - There does not appear to be any saddle creating a close seal between the bottomn of the door and the floor. This is an area that needs attention to avoid insulation problems, moisture seepage and even insect incursion. There shoudl be a saddle that reaches the outside floor level. Again, uneven levels require some build up generally under the main saddle. The gap is less of an issue than bridging the gap.

For the gap at the living room try a stained piece of 1/4 round next to the threshhold and some grout to fill in the space that is left. For the outside door area look in the wood laminate trim area at the home store for a piece of edge trim similar to what you have at the other problem area. You can maybe find something with a stepped profile that will match the tile height.

5
How should I lay my engineered flooring to account for a hearth?
3
Do I really need an expansion gap around the entire hardwood floor?
4
How do I ensure my first row of hardwood flooring is straight?
2
Can I use 1/4 inch cork to equalize floors before installing laminate flooring?
3
The vinyl plank click flooring I installed in two rooms develops gaps at the ends between the two rooms. Can I glue the ends together in this area?
1
How to Hide Expansion Gap around Oven
1
Fill substrate gap before flooring tile
2
How do I handle a thin strip of vinyl plank flooring against a wall?
1
Filling gap beneath hardwood floor (between floorboard and foundation)