Edit: Adding some up-front clarification because people seem to be fixating on the "asbestos" part of this question.

This is what I am asking for: help determining what prior work may have been done in my house based on the context I have and some visual clues.

If that's not appropriate for diy.stackexchange, that's fine! But the provided answers and comments have not made it clear if the problem is with the asbestos part of the question or the fact that I'm asking for opinions about previous work.

What I am not asking for: determination of asbestos content based on photos or discussion of the varying degrees of danger that asbestos exposure represents.

We moved into our house about 2 years ago, and at the time it had 2 bedrooms with asbestos popcorn ceiling texture (that we've since had removed). The rest of the house has either a (poorly-done) knockdown or orange peel texture that was done sometime before we bought it.

I'm trying to figure out how the previous owners dealt with the popcorn ceiling that was very likely throughout the house (besides the 2 bedrooms we know about). If they did it right, they would've scraped it, repaired the drywall and re-applied texture, then painted. There's one area where the ceiling meets the stone fireplace, that makes me wonder if they could've instead just covered it rather than removed it. 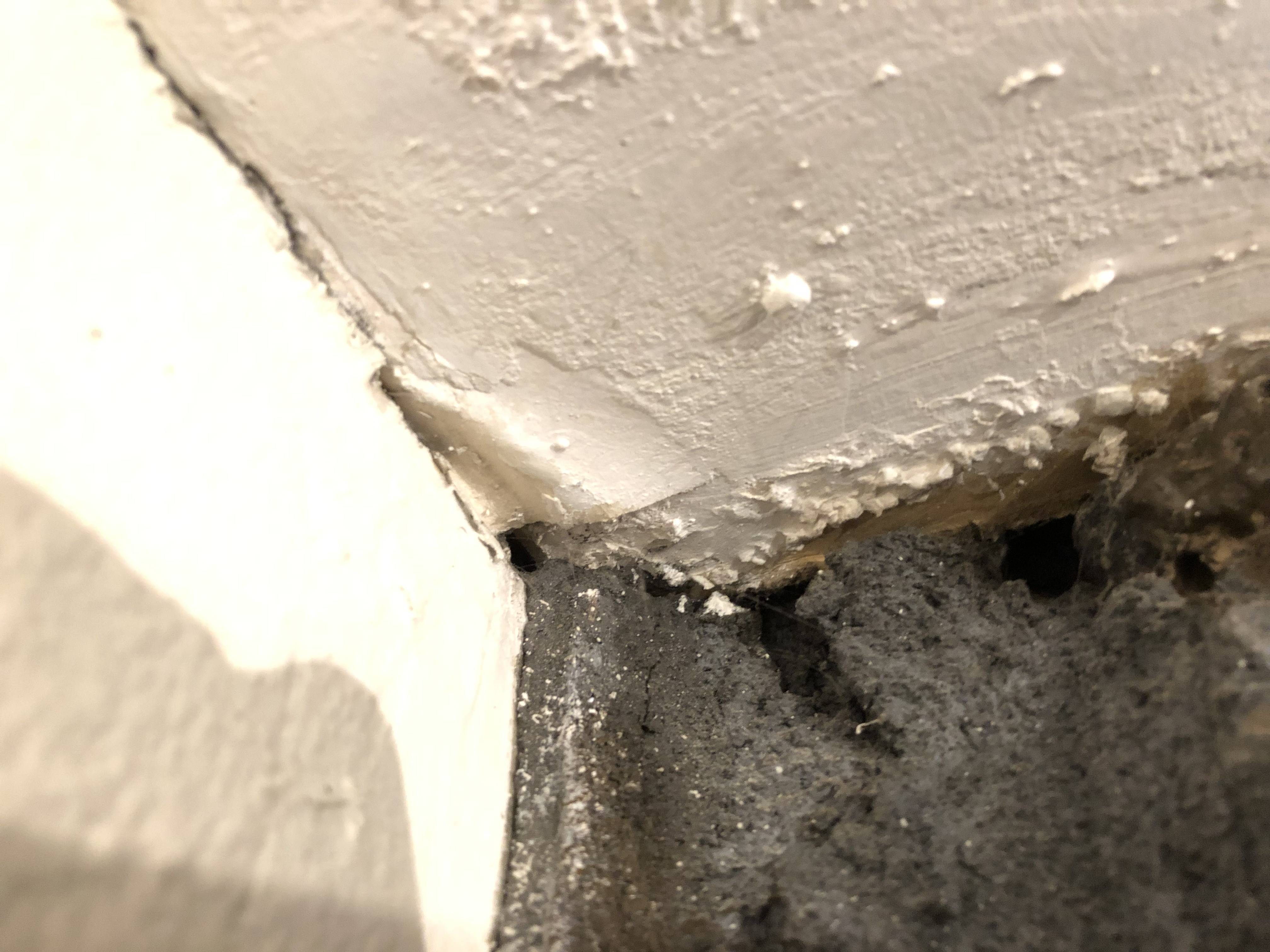 This photo is from the top left of the fireplace. There's a little bit of texture that looks like popcorn texture to me, to the right in the photo. To the left, where the ceiling meets the wall, it looks like there's some drywall tape? 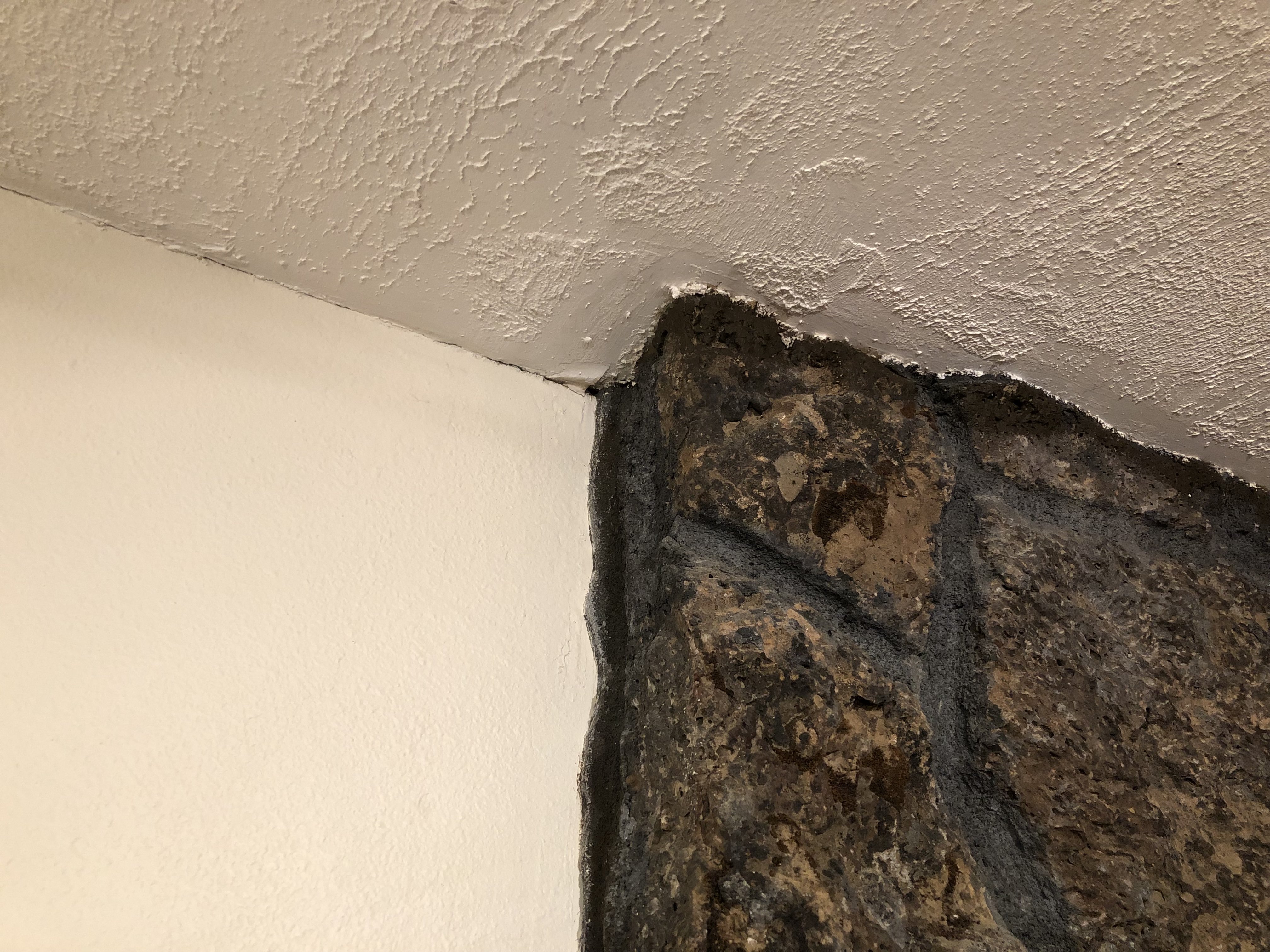 This is basically the same shot, but from a little further away for context. What's the likelihood they covered or contained the old asbestos popcorn texture, rather than properly scraped? The knock-down is pretty thick and not very well done. Seems possible that they sprayed on a bunch to contain the old texture, but I don't really know how common that is.

To clarify in response to some of the comments - the popcorn ceiling we had removed was tested independently and contained asbestos. I'm trying to determine the likelihood that the previous owners removed vs covered the popcorn ceiling in the rest of the house.

In my experience it is very rare to overcoat popcorn ceiling texture. The reason is because the texture has very little body (even less than popcorn). If you have ever painted popcorn texture the stuff comes off with the lightest pressure so on many jobs we got it damp and just scraped it off. I am not saying an overcoat could not be done but think there would be much more of a mess than I see. Look closely at the texture it looks more like a sponge or rolled mud application. For me personally I would poke the ridges if they are solid like dry mud I would not be concerned. If they are spongy like a spray paint over the top of a sponge then it is encapsulated and is safe. If you want to work on the ceiling the little bumps at the edge would be the closest thing I see that may be residue that was not totally removed, have those bumps tested prior to working on the ceiling.

The only way to tell if a ceiling contains asbestos is to take a sample and have it tested. There is lots of "popcorn texture" (Artex in the UK) which doesn't have asbestos and some that does.

If you're looking for someone to guess what someone may or may not have done in a house that contains popcorn ceilings which may or may not have asbestos because not all popcorn does, you won't get answer you're looking for because people don't like to play the guessing game with asbestos. The answer will be pure speculation. Some people will fix it properly and others will just cover it.

My answer is to get it tested because it's the only answer that will give you peace of mind. You don't want to be 20 years down the road and say "some person on the internet said not to worry about it and now X has happened". There should be multiple places around you that can do the testing and not just the previous contractor you used. There are even kits you can buy at the big box store that you can mail in.

Not the answer you're looking for? Browse other questions tagged drywall ceiling asbestos texture or ask your own question.

0
popcorn ceiling in old building but ceiling looks new- asbestos worries
2
What can/should be done to mitigate asbestos danger after a disturbance?
2
Should I cover area where ceiling once was?
1
Was asbestos used within wallboard itself, or just in the joint compound?
1
Did my painter do a bad job making the ceiling flat after removing popcorn ceiling?
0
How to safely handle a (likely) asbestos popcorn ceiling encapsulation?