What is this strange coiled wire and should everything be redone?

So I'm going through my house, replacing the switches and came across this switch that controls a fan in my bathroom. It looks like this may have been something the previous owner did, and did incorrectly. 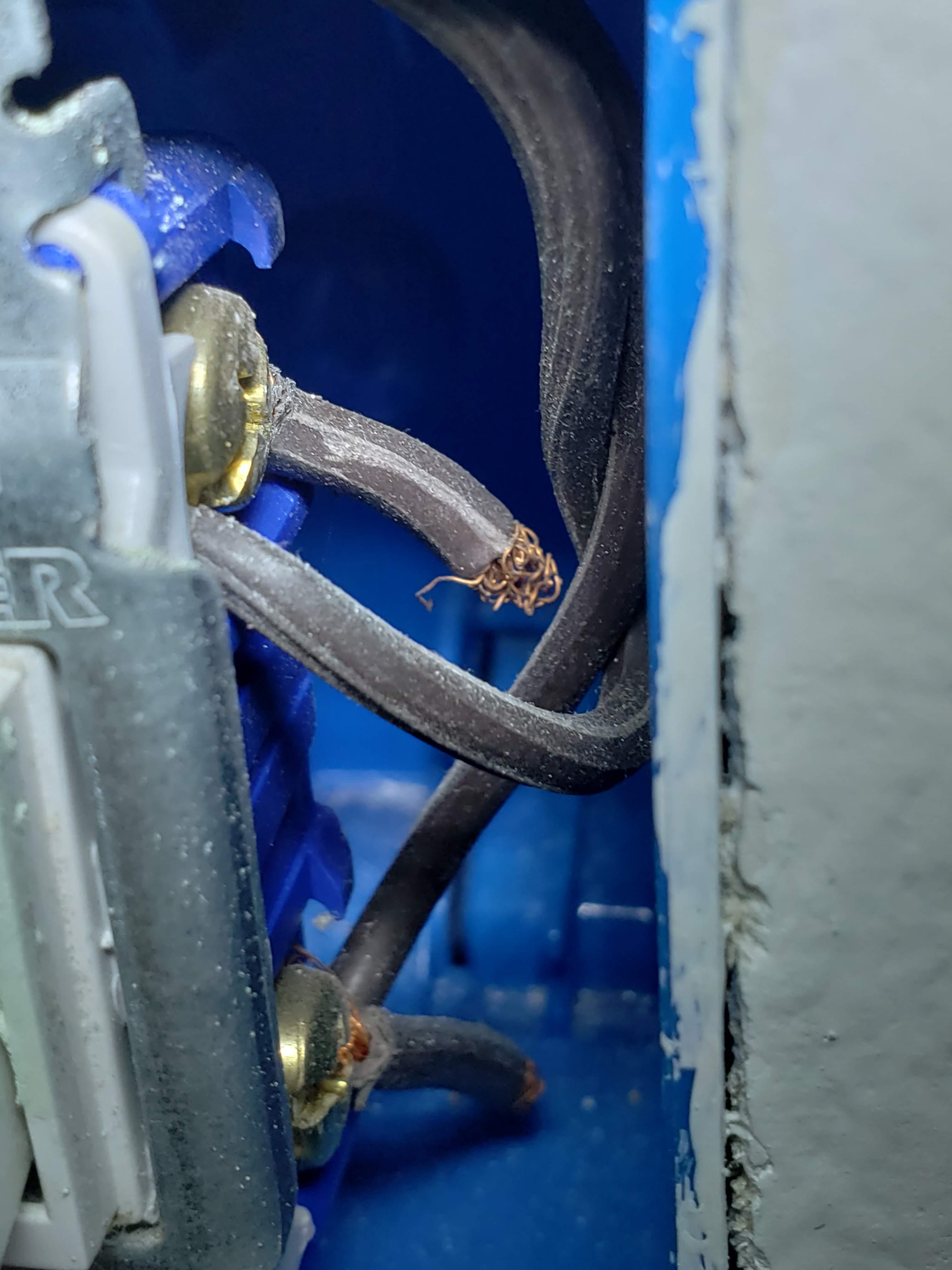 If you notice, there is this strange coiled wire looped around the terminals. The wire itself appears to be stripped in the middle for the terminal connections and continues with the tip exposed. This looks bad and I think should be fixed.

The problem itself is not that big of a deal for me, just an annoyance.

Probably the best thing I can do is to replace it and make the fan independent of the light. This just puts a lot of work on my end as I only want to update the switch, for now. I have other plans to get an electrician to add circuits to my house at some point, just not anytime soon.

I'm a little afraid to pull it out as I believe the wires will not stay in place/can bare any weight without dangling. Here is a different angle of the switch, you can see the majority of the box. 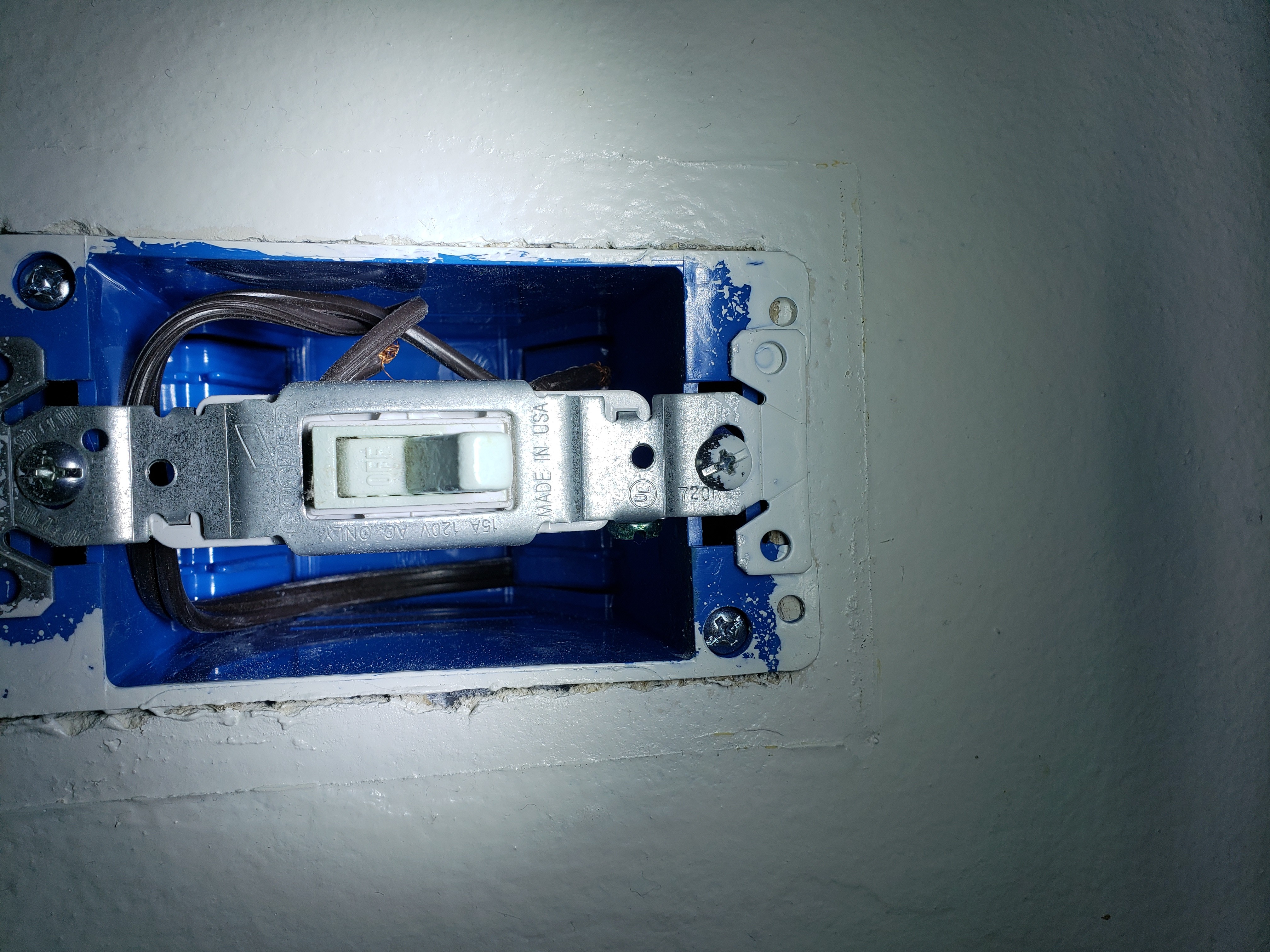 Whoever installed this lightswitch used the first thing they could get their hands on, apparently SPT-2 parallel cordage of some sort, instead of NM cable. As a result, there is no ground in this box at the moment, nor is their a neutral, which is now a requirement to provide at switch locations to accommodate smart switches and such.

As a result, the entire cable that connects this switch to the fixture it controls needs to be replaced with a 14/3 NM cable -- black goes to always-hot in the vent-fan box, red goes to the vent fan hot, white goes in with the neutral bundle that the fan connects to, and bare goes to the ground bundle. In the switch box, bare goes to the green ground screw on the switch, black goes to one switch terminal, red goes to the other switch terminal, and white simply gets capped off with a wirenut as it's not used for a "dumb" mechanical switch that simply sits in the circuit hot and breaks it.

This is also a sign of further trouble lurking

This sort of sloppy work in one place means one thing: that there's probably more trouble lurking where you cannot see. Do not be surprised if you see more flagrant Code violations during further work. If you have a friendly electrician at hand, you may wish to call them in and go on a Code-violation scavenger hunt through your house with them, even.

It looks like someone has used lamp cord here. It should be pulled out, and redone with Romex, or whatever is legal where you live.

I'm a little afraid to pull it out as I believe the wires will not stay in place/can bare any weight without dangling.

The good news here is that, whomever did this, used an "old work" box to add this switch. See the screw in the top right and bottom left of the box face? If you unscrew those, the box will come loose and you can pull it back out of the hole (the screws attach to tabs that flip up and grab the backside of the drywall). This will make re-running the wires MUCH easier, since it's likely they just fished the wires up from whatever the wires attach to (the wires come into the bottom of the box, not the top)

5
What's the recommended procedure for converting a single circuit light switch into two switches for controlling a bathroom fan?
2
How do I wire a light switch and outlet in the same box?
0
2 switches in one box in bathroom
3
How should I wire a ceiling fan when there's only three wires in the box?
3
Wiring help for a Switch with LED Guide Light
0
Convert 2 switch to 1
1
Replacing a double switch
1
Cannot find the common wire in “box #2” on a three way circuit
3
How do I know if this switch box has a neutral wire?