I've used PEX bend supports in the ½" size before which worked great, but trying to use them for ¾" has been difficult. Regardless of the method I've tried, the plastic ones keep snapping.

Using the bend support itself as a lever to bend the PEX is definitely wrong, it breaks right away.

But even bending the PEX first by hand into more-or-less the right shape, and then inserting into the bend has caused many of them to snap & break.

This is PEX-B which is rather stiff. But I am trying to bend it in the direction it was coiled in. I'm working in a basement which is usually 50-55 °F all the time.

Is there some particular method of doing this right?

(I've also tried metal ones which don't break but refuse to stay on the pipe. But that's a separate problem). 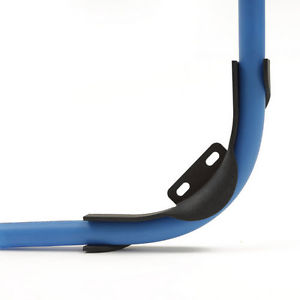 I think you've hit on the problem. I'd carry a bucket of hot water with me and dunk the segment to be bent for a few seconds before doing so. Pex is really stiff when "cold" (below 60° F or so). It should then bend more easily and somewhat hold the shape after it cools.

Use plenty of pipe hangers adjacent to the bend support to, er... support the support. Alternate sides as appropriate.

This was the method that worked for me in the end, though I'm sure not the only way to do it.

First, I would "pre-bend" the tubing basically as much as possible, past 90° even, before adding the support. While the tubing starts to return to its original shape right away, this added curvature still reduced the effort to add the support significantly. This was true even if the center of the bend wasn't exactly in the right place. Be careful because that the tubing WILL buckle if you go to far with it.

Once I started to fit it into the bend support I made sure to apply the bending force directly to the tubing and avoid directly bending the support itself. This is harder to do than it sounds, since you almost need a third hand. (Or a helper). Using a wall or other rigid object as a prop, for instance, allows pushing on the pipe with body weight without stressing the support too much.

2
Can't get threaded connector all the way into shower faucet. Do they need to go all the way?
3
How can I remove this valve?
1
How can I get warm water from my garden hose?
1
How do I run PEX to exterior plumbing?
1
Why are Pex cinch clamps breaking?
12
How can this older-style irrigation tee be replaced?
1
Remove broken drain in manufactured home
1
Can't remove twist-style / turn-style / knob cap on overflow drain in tub