How to repair a beam of structured 2x10s

My house has a beam of 5 sistered 2x10s that are uneven.

The beam has joists resting on top of it to support the floor, and joist hangers on one side to support a lowered room.

Many of the members of this beam have fallen out (see pictures), and the joists resting on top of the fallen sections are causing the floor above to be uneven.

Is there a way to repair this beam? 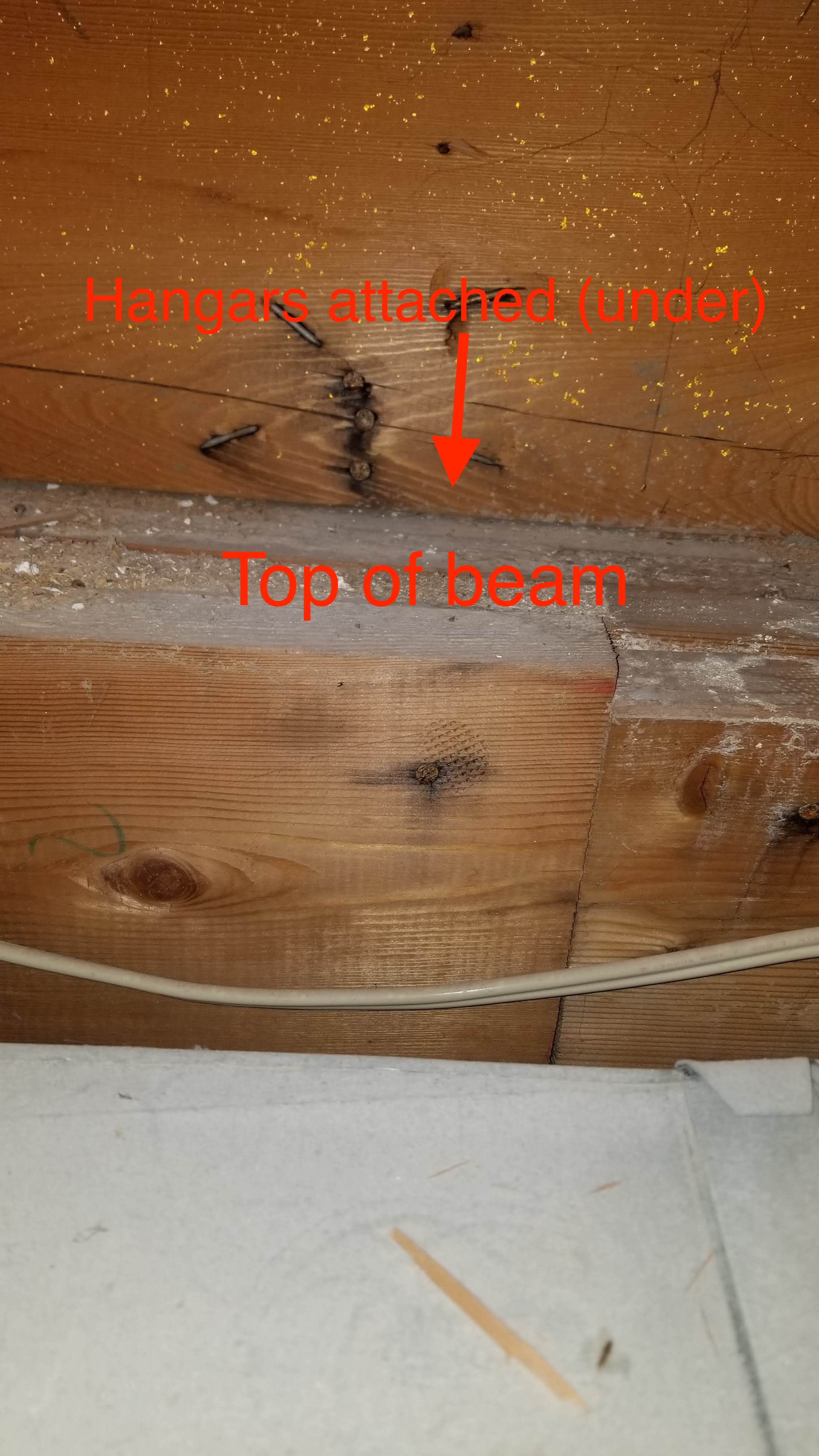 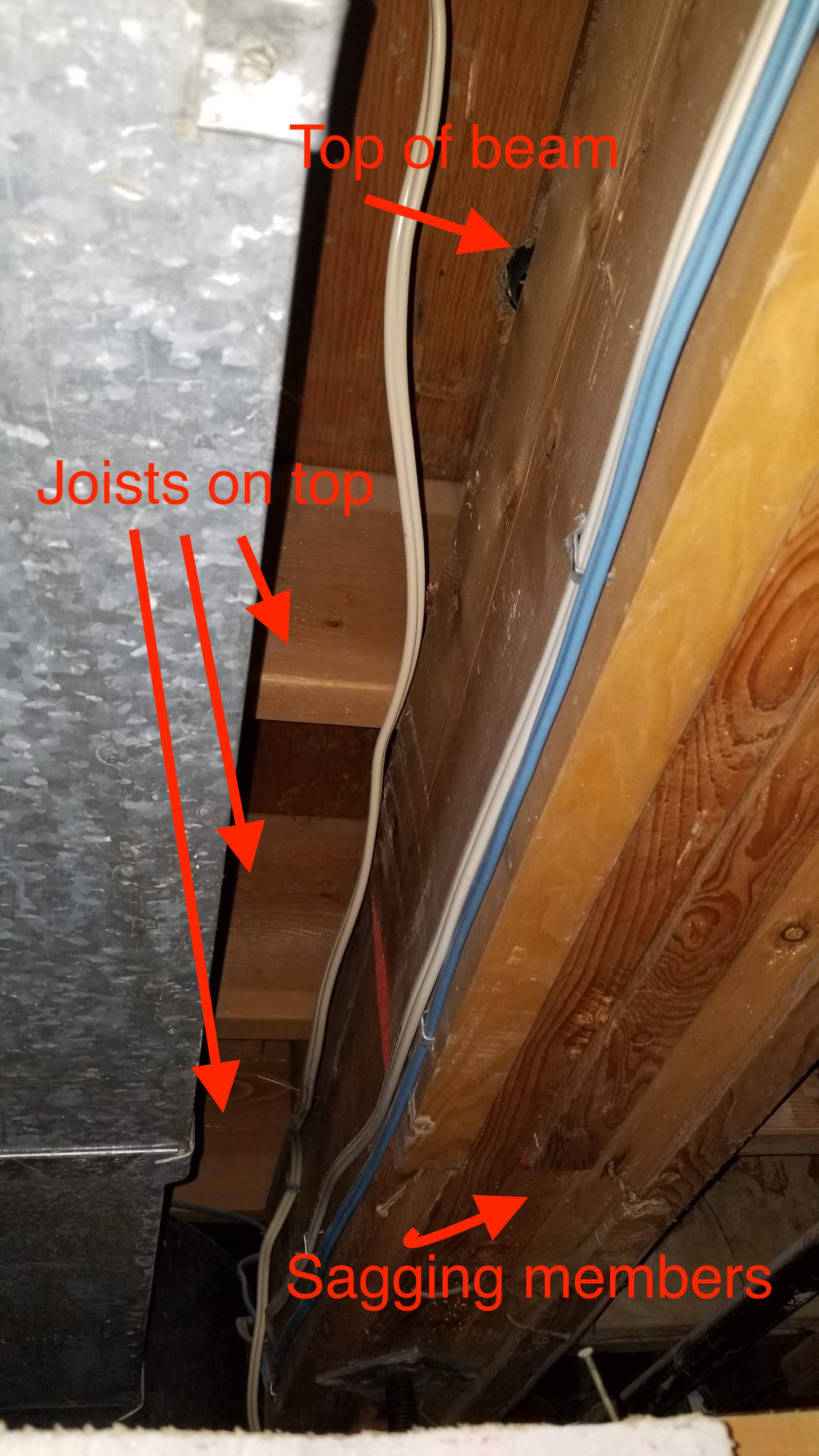 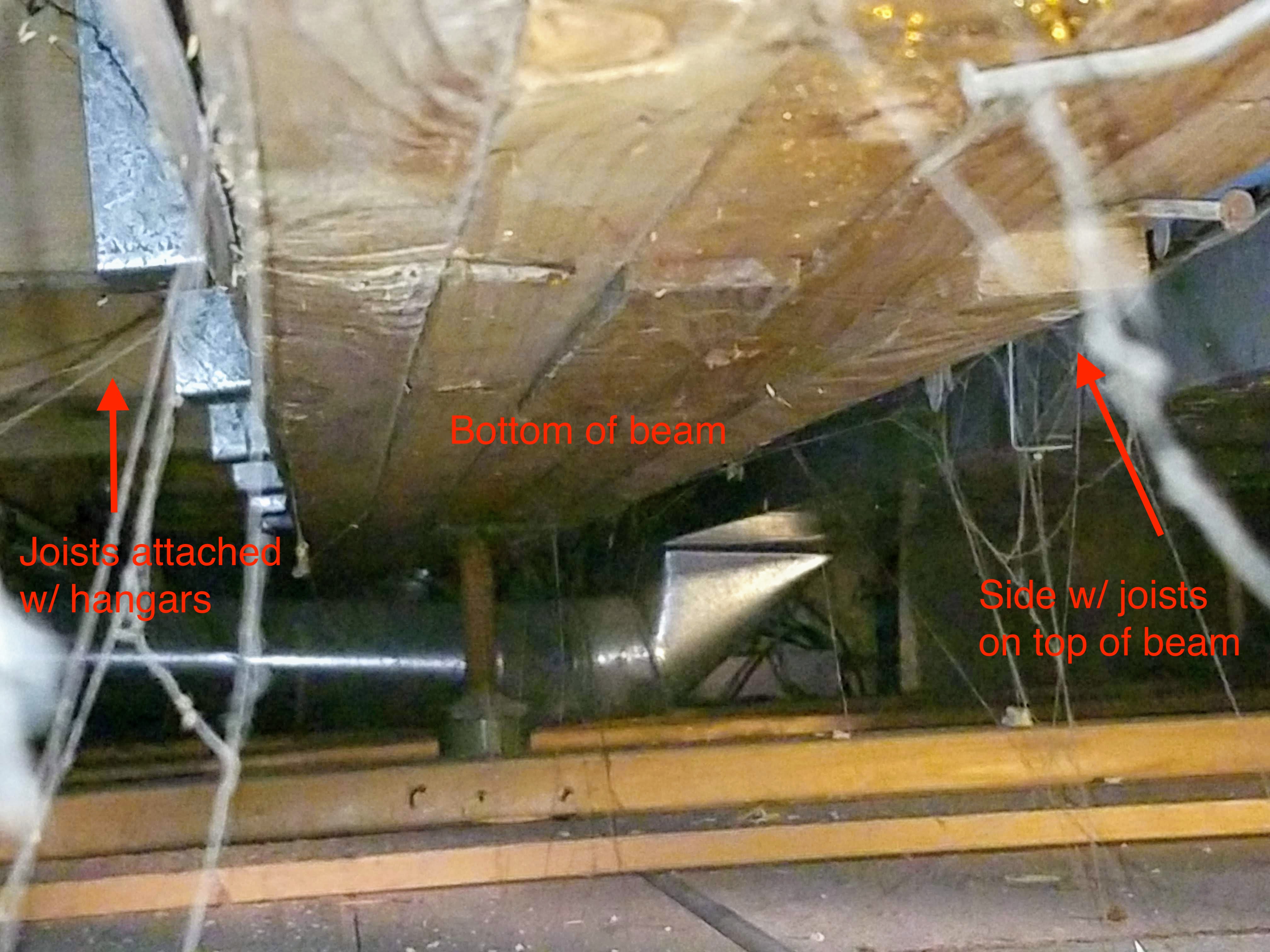 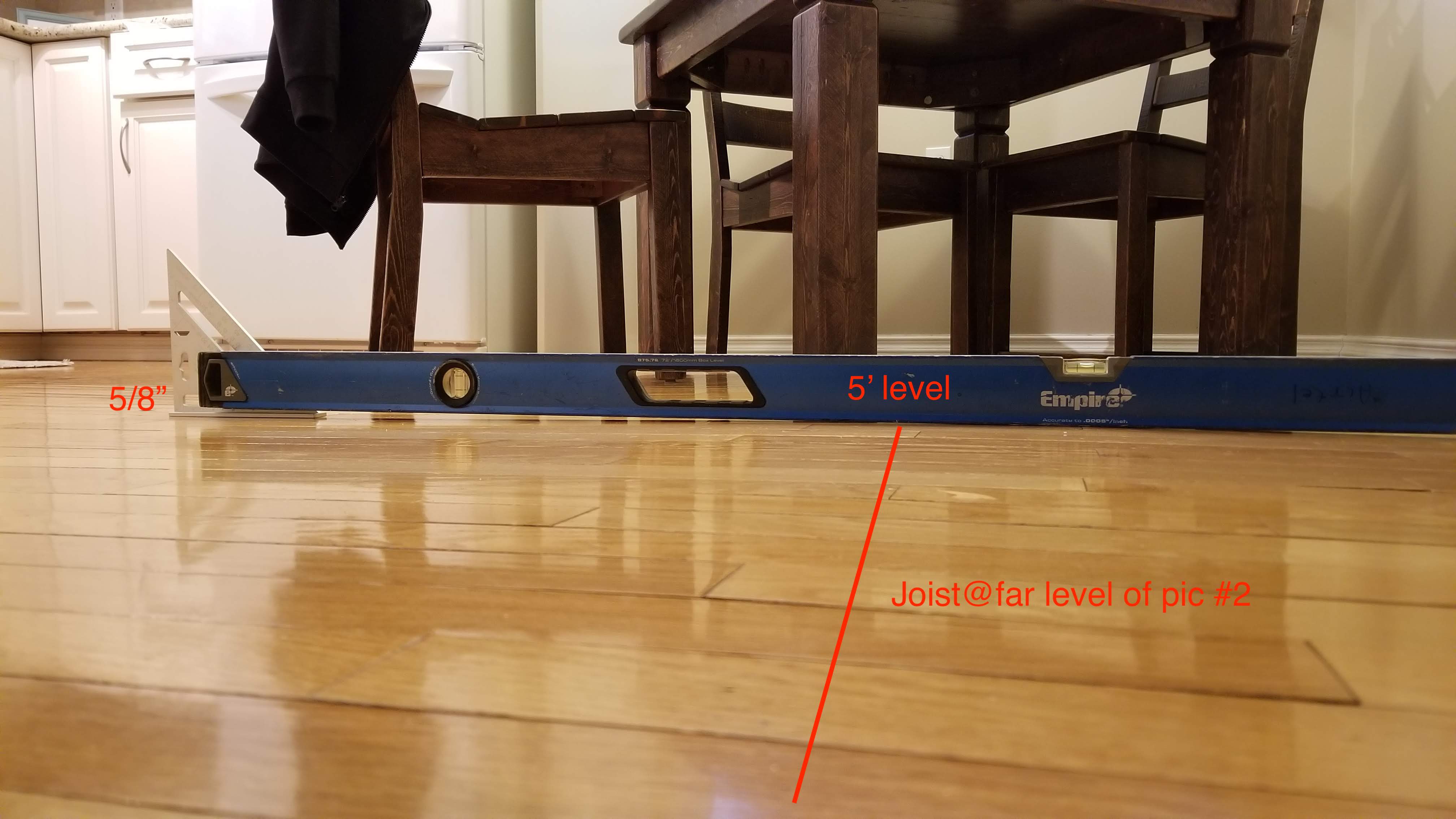 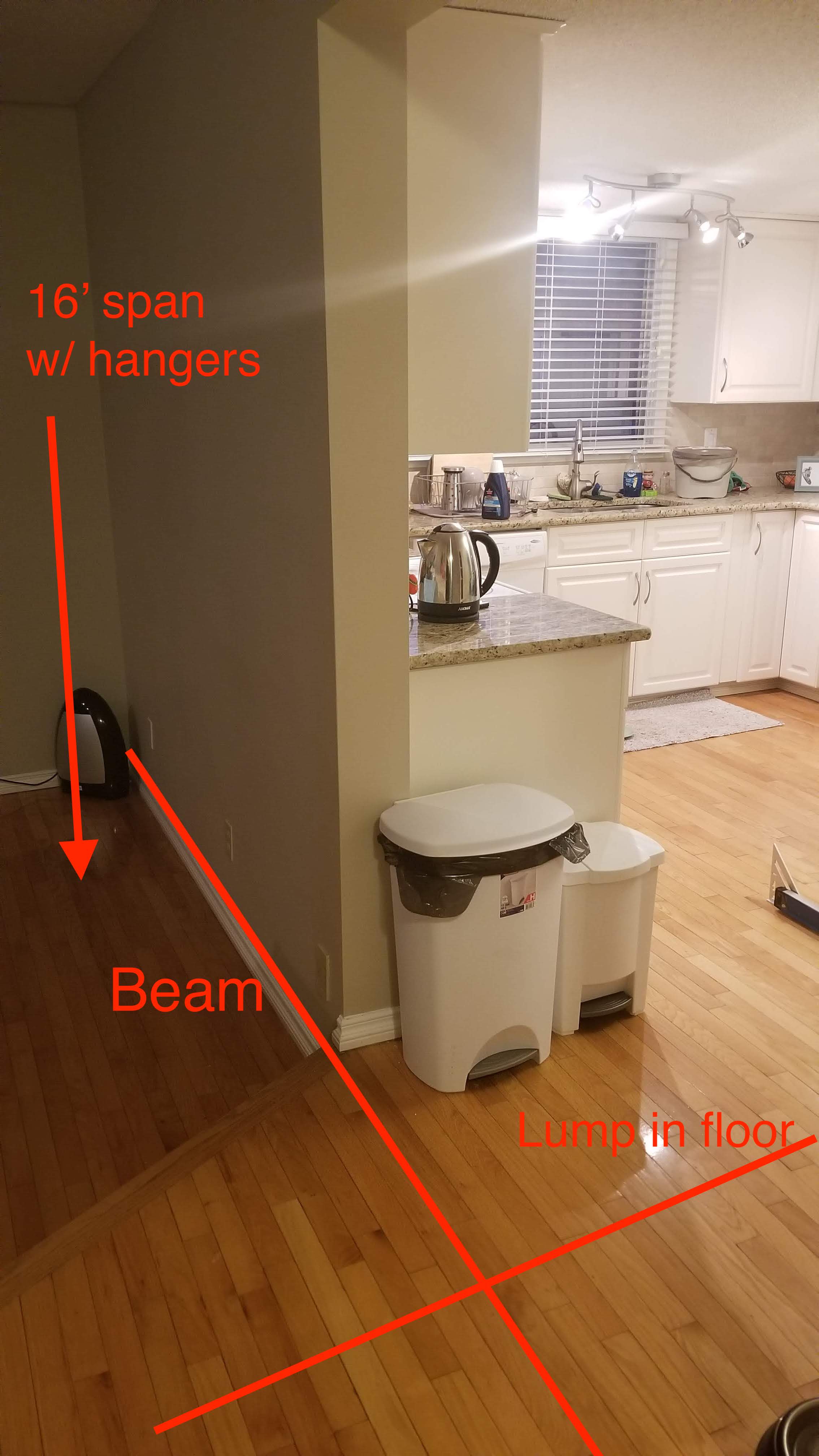 I doubt your 5-2x10 beam is failing. Rather, it appears that it was poorly laminated together. I would NOT recommend jacking the BEAM, but rather “securing” the hangers to the beam AND the beam to the structure (building).

You have several issues: 1) structural adequacy and transfer from hangers to beam, 2) connection of sistered joists together, 3) post to beam connections, 4) post to floor connections

1) The joists that span 10’ and sit on top of the beam is not an issue. However, the joists that span 16’ and sit in a hanger is a problem. The reaction (and thus the load on the hangers) is about 650 lbs. each. That means the hangers need to be rated for such a load and installed properly. Most hangers rated to carry that kind of load have a tab that fits over the top of the beam. If these do not, then they need the bigger diameter “short” nail. Without the correct nail it could allow the hanger to settle (which it appears like it’s doing in the second photo).

You didn’t say, but if the lower floor is uneven, then you need to “re-align” the hangers, not jack the beam. You can do this by removing the hangers one at a time and reinstall level.

2) Because the hanger is fastened to the side of the beam, it needs to transfer the load to all the sistered beams. I’d install a 1/2” bolt through all the joists at 32” o.c. (between the hangers) top and bottom (which will be 16” o.c. between top and bottom bolts). Keep the bolts 2 1/2” clear from the edges, top and bottom.

3) This is an important beam in your house. It’s carrying about 950 lbs. of floor load per foot, which means you have about 4,750 lbs. of load at the posts. Get a connector that’s rated accordingly.

4) Likewise for the footing connection.

The joists and beam are structurally adequate. The beam just needs to be secured together. Jacking the beam will cause significant problems above and should be avoided if possible, unless the floor is uneven because the beam is “tipping”. If that’s the case, other issues apply.

The beam should be substantial enough. It's a bit baffling how poorly it was built, though. Were it my house, I'd jack up the beam and fasten it together properly. By doing so you should restore the straightness and rigidity that was originally intended.

Not the answer you're looking for? Browse other questions tagged floor joists structural or ask your own question.

0
Replacing a spanned “beam” with a cantilevered beam
4
How can I repair the structure of this floor?
1
Misaligned floor joist hangers
1
floor joists splitting at non-beam end
1
Should I reinforce these joists at the central beam? If so, how?
0
LVL Span Ratings and Beam Placement
1
Contractor cut joists short (followup to earlier question)