We had a leak in our attic and have water damage on our ceiling (plaster on lathe) and exterior wall (plaster on concrete block). Because of our stupidity, we know that the leak consisted of exactly 1/2 a gallon. The water damage happened a month ago, but I have been ignoring it.

My plan today was to scrape off any damp or damage plaster in preparation of fully drying the block wall and repairing the plaster. I don't have a moisture meter (yet), but was hoping that I would be able to find the dry edges. The damage seems to keep going with the paint and plaster coming off in fairly large sheets.

The central part of the wall is damp to the touch, while it is hard to tell about the edges. Is the right way to go about this to keep gently scraping anything that comes off? How do I know when to stop scraping? 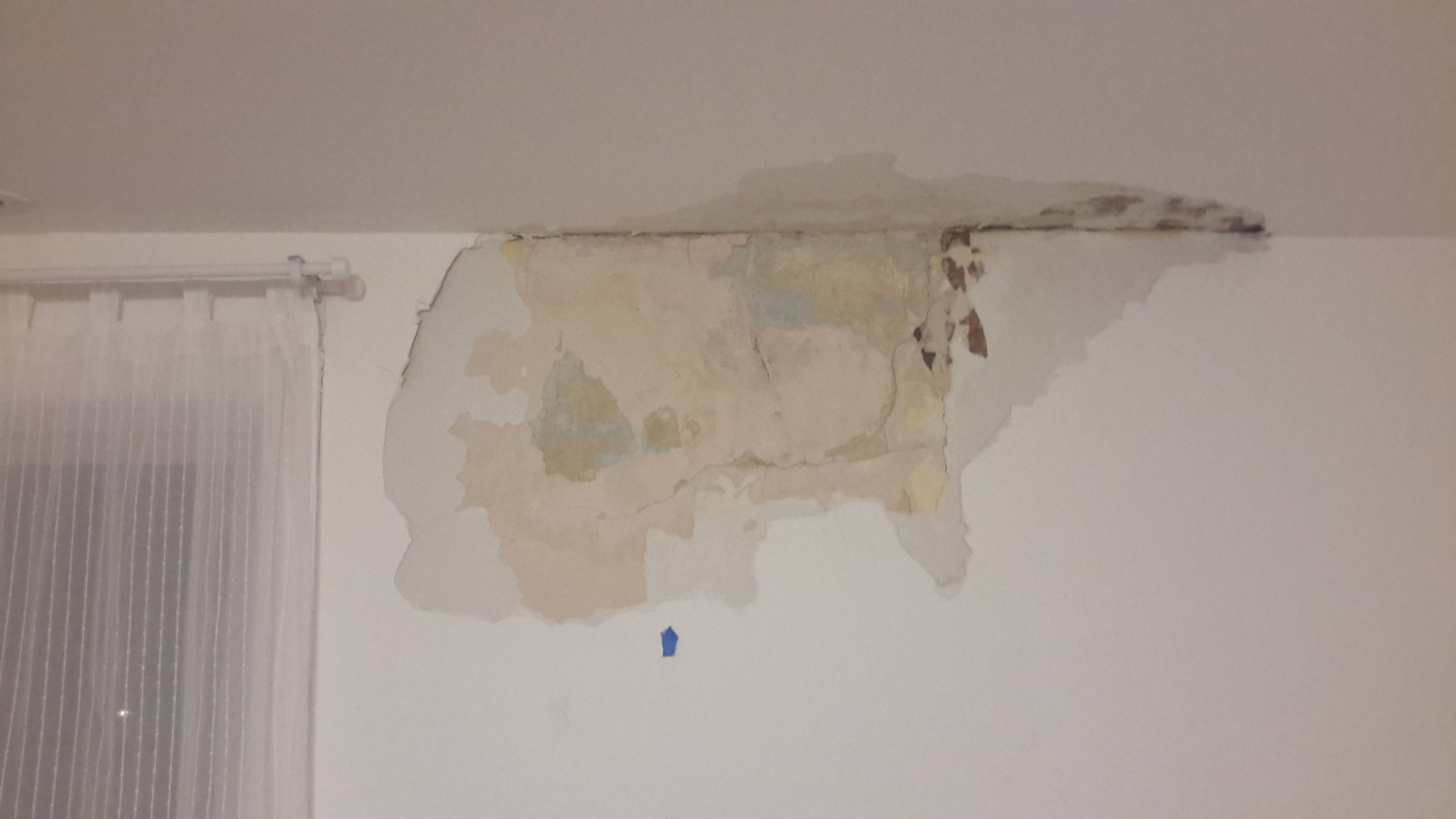 I understand that you want to remove the damaged material but you also don't want to scrape so aggressively that you end up removing a large amount of undamaged material that could have stayed in place, and it is difficult to know where to draw the line.

A good rule of thumb is that if the material can be removed using light pressure with just your fingers and crumbles away easily then it is too damaged that it probably shouldn't stay there.

You may find that there is material which can be easily removed, but hasn't been water damaged, particularly if this is an old house there may be crumbly plaster just due to it's age or pre-existing damage. Unfortunately that should be removed too.

Once the only material remaining is material which is strong enough to stay there that can't be removed by pulling with finger strength, you can plaster over it, but ensure it is fully dried out first and remove any dust from the surface with a brush.

The reason the wall hasn't dried out for a month is probably that the paint on the surface is preventing the moisture from escaping. Once the damaged paint is peeled off you can use a dehumidifier in the room for a few days with the windows and doors closed to help dry it out.

If you don't have a dehumidifier then the process will take longer but you can help by leaving a window slightly ajar.

I have successfully used this method to repair a plastered wall which was crumbling in parts due to it being over 100 years old. The part of a few square metres which I re plastered has held for over a year now.

EDIT: It looks like you may have to take down your curtain rail temporarily while you sort this out if the damage extends that far.

Not the answer you're looking for? Browse other questions tagged leak plaster or ask your own question.

6
Mild water damage on drywall from leaky roof
19
1lb of cure is worth 10 tons of mold: DIY repair of a poorly sealed window? lots of photos herein
3
Should I be concerned about the repair to a ceiling after water damage?
2
How can I damp proof this wall?
2
How can I tell if stains are caused by a ceiling that is drying out, or if there is still a leak?
8
Can I install drywall on the ceiling, without removing crown molding?
3
How can I find a leak in underground plumbing?
4
Plaster Wall Ice Damming Water Damage
1
paint failing on plaster
2
Repairing crack in interior block wall