Breakers for living room was working, but has stopped after I turned breaker on/off

I have one circuit of outlets and lights in my living room that stopped working one day. This happened after I turned off all the breakers to the house and when I turned everything back on I noticed this set stopped working.

It hasn't worked since that day. But today I was mapping out my panel to all the outlets and lights in the house and I'm turning on and off all the breakers (one by one) and I noticed the faulty circuit that previously stopped working had all of a sudden come back on at some point as I was testing all the other breakers.

has this happened to anybody else? Any solutions or things I can try? I do notice that the breaker for the circuit looks slightly off compared to the other ones (see pictures). Not sure if that's the reason it's not working.

I have an older home (knob and tube) if that's relevant. Also an electrician had come over and fix the same problem in the past, and just mentioned something about this happens when the wires become loose. But other than that I don't really know what he did to get the circuit working again. And also I don't understand how if the problem was the wires being loose, how does turning breakers in the panel on and off suddenly make the circuit work again? 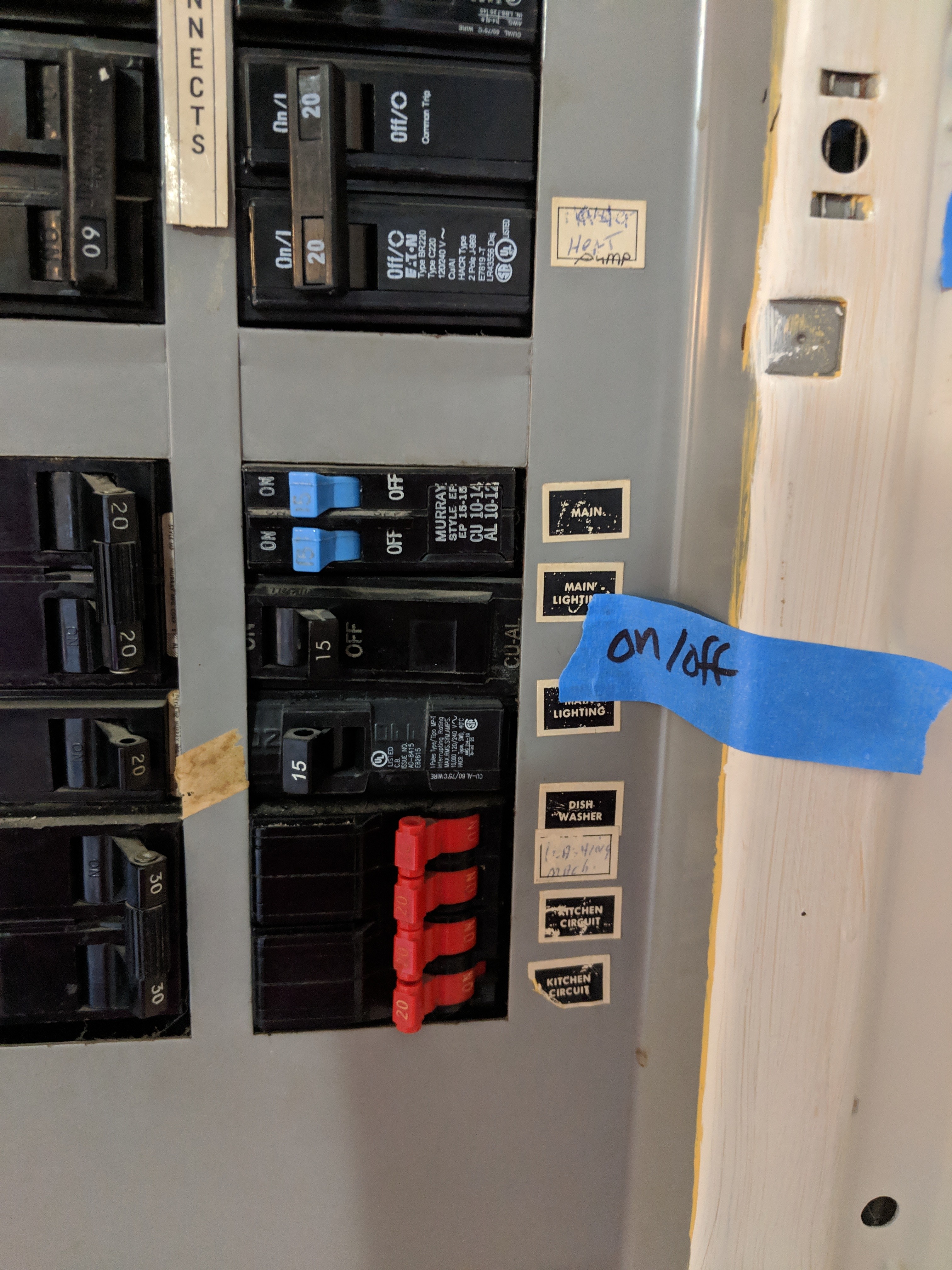 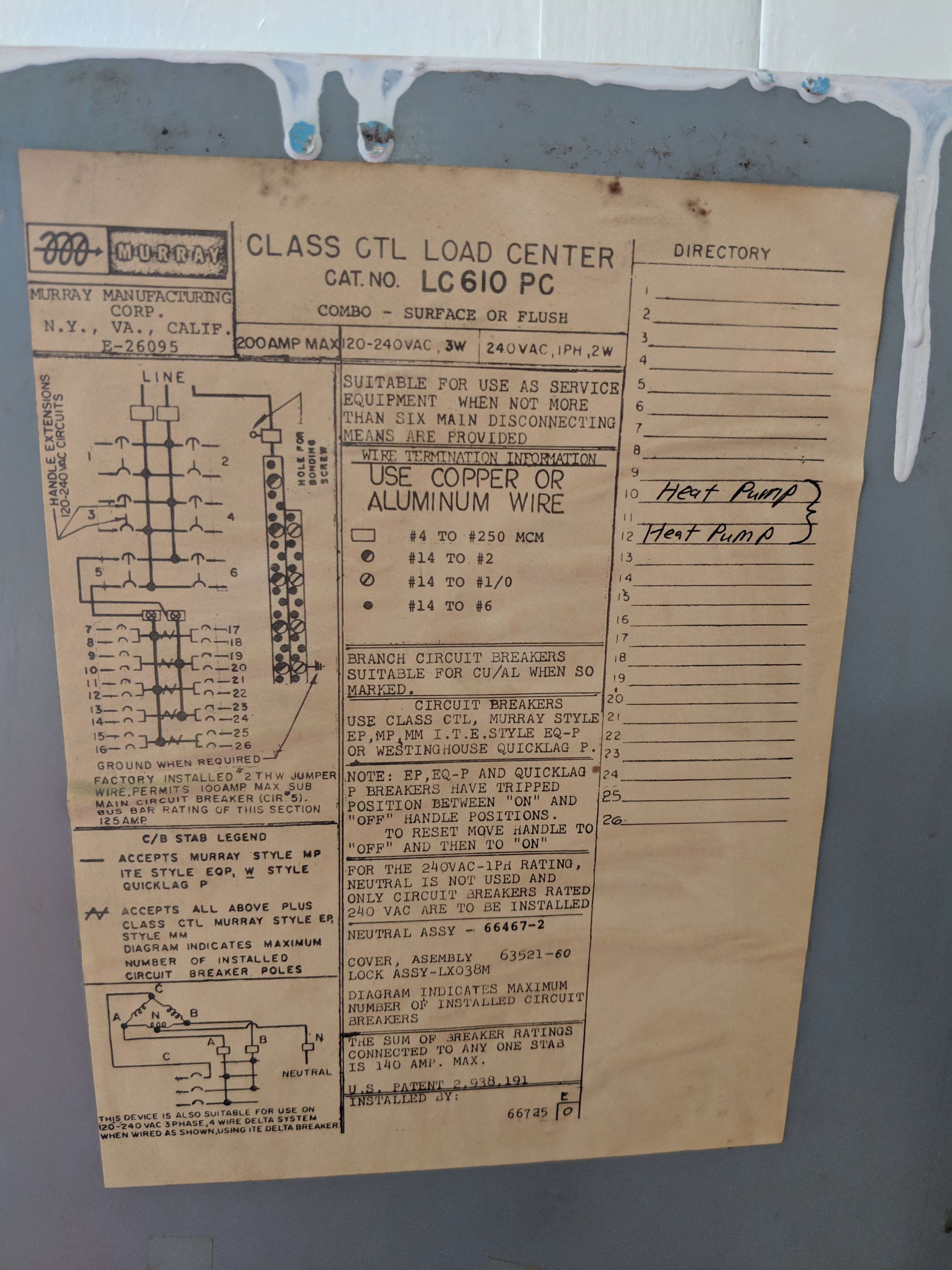 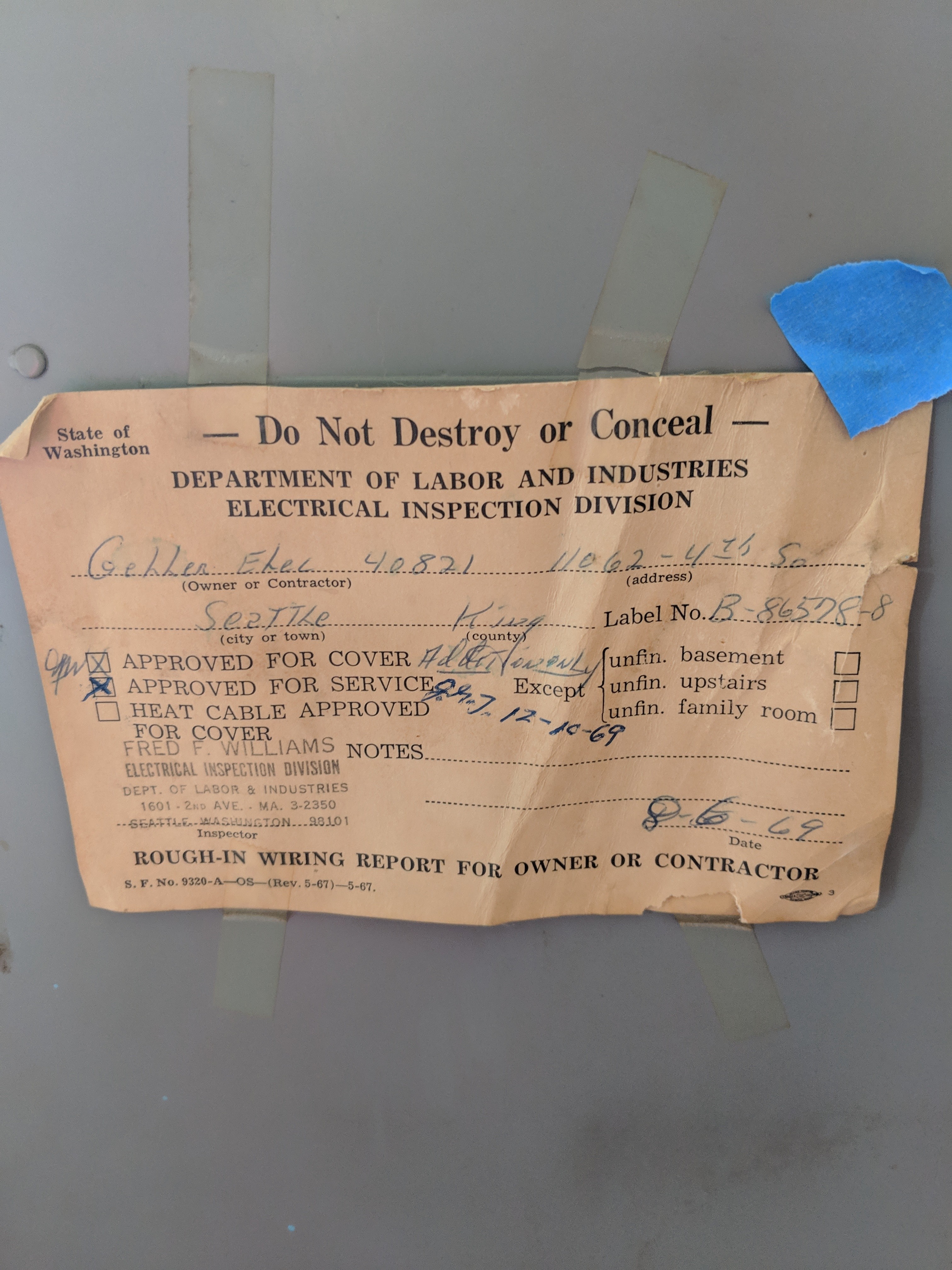 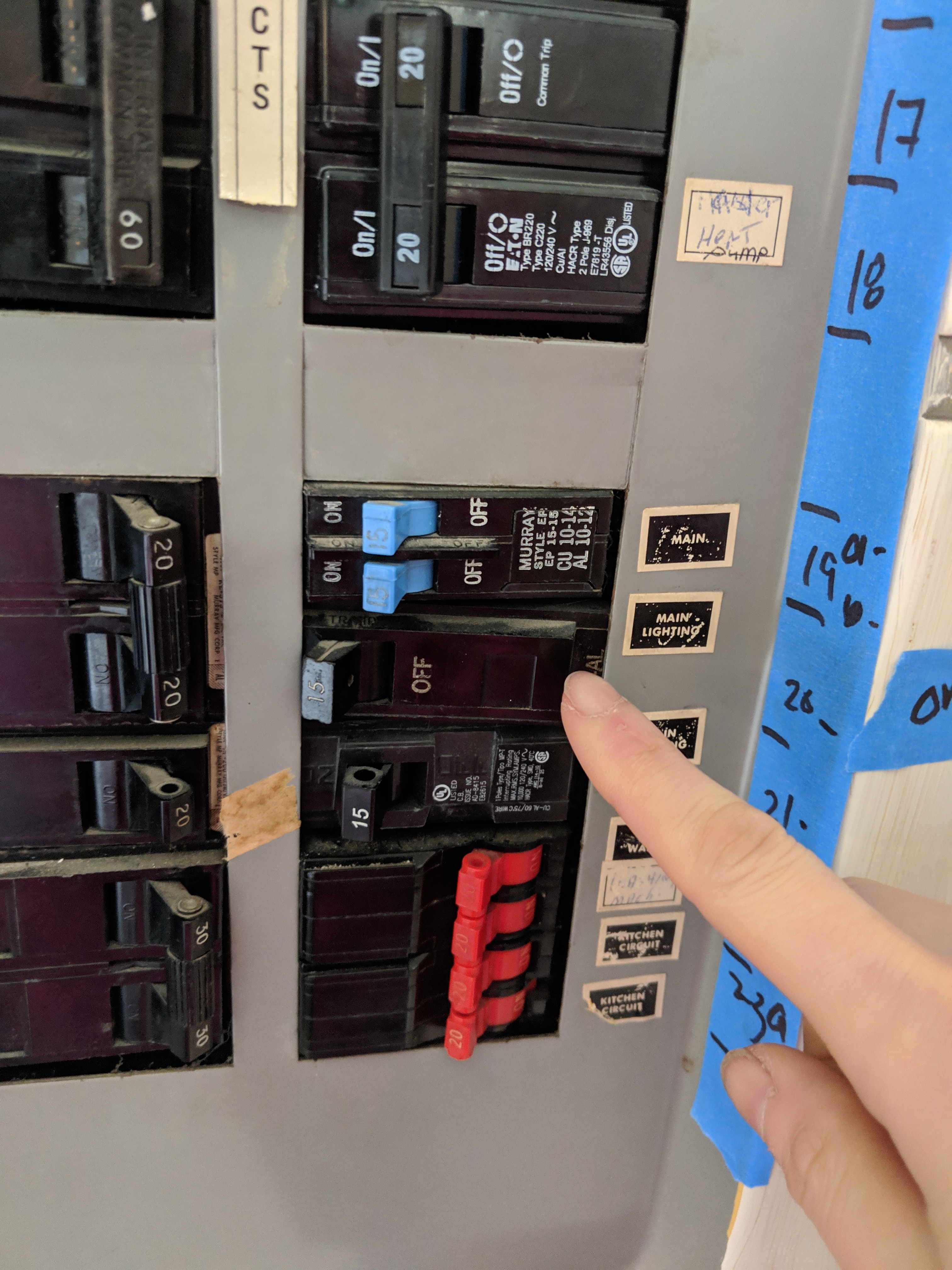 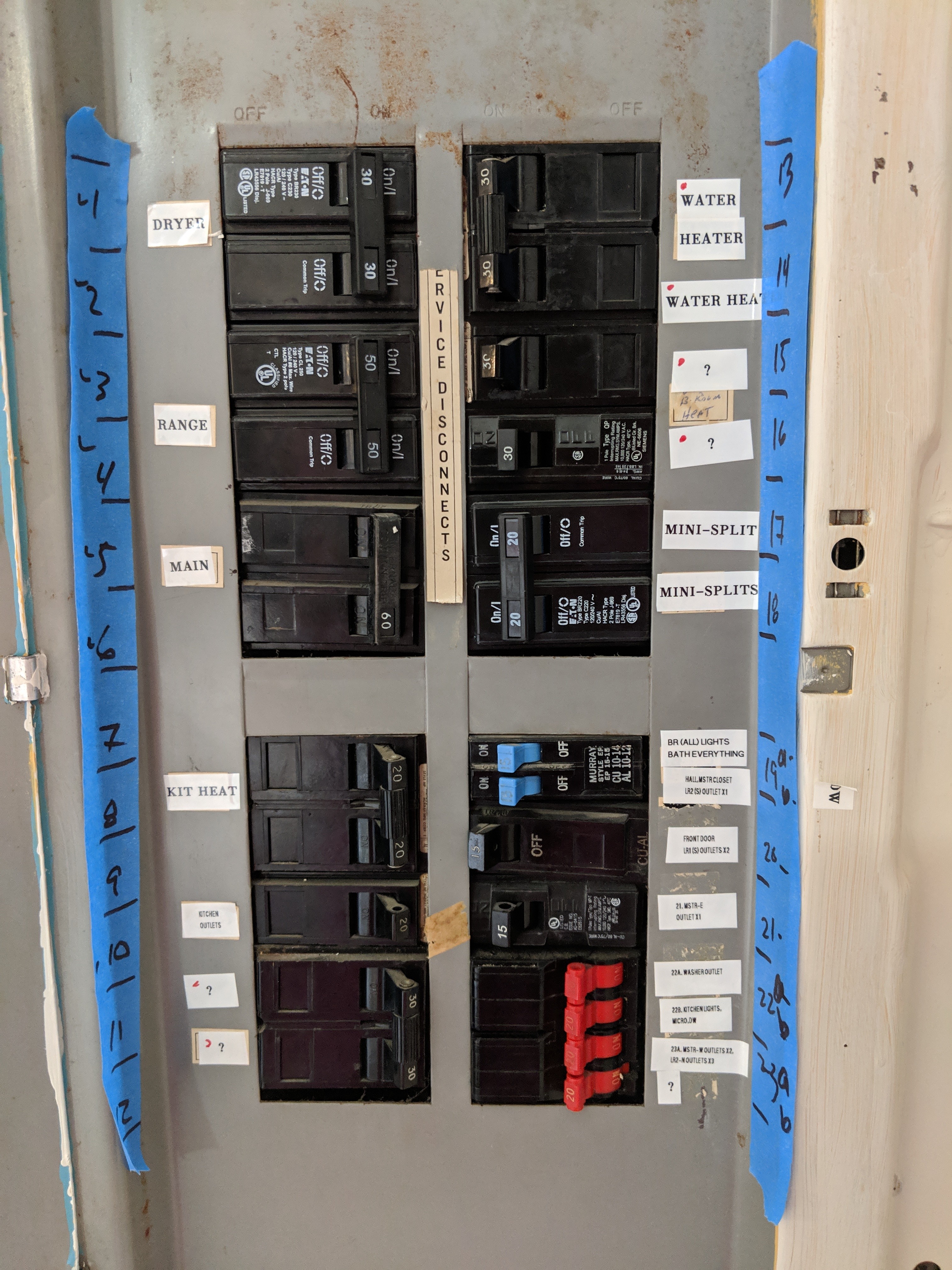 No, there are no Little Green Men messing with the wires in your house. However, your circuit breaker panel has been invaded by circuit breakers that do not belong there, and one of them appears to be involved with your problem child circuit.

In particular, your electrical panel is an older Murray model, listed and labeled to accept Murray breakers (which are really Siemens breakers now), as well as the old ITE EQ-P series, which apparently has been succeeded by the Siemens QP line, and the Westinghouse QUICKLAG P breakers, which are now made by Eaton as their HQP line. However, some Bryant/Eaton type BR breakers were installed into the panel, which is incorrect; furthermore, there are a couple breakers in there that I cannot ID. (The Eaton BR look-alike in the top center left, though, is OK -- it's an Eaton CL, which is UL classified for use in Murray panels, among others.)

Finally, your last photo shows another Code violation -- your panel is a rule of six setup, but has 7 breaker handle throws in the top section, violating the rule of six. We'll need to rectify that as well while we are in here, and only then we can move onto further troubleshooting your issue. Fortunately, getting this panel to a state of good repair should not be expensive.

Getting this panel whipped into shape

Moving down to the bottom section of the panel, we have two further defects to address. First off, it appears that the breaker for the problem circuit is an older Bryant breaker, so I would replace that with a Siemens Q115/MP115 -- it could very well be the case that the breaker's line-side jaw is not fitting correctly onto the busbar "stab" in the panel, leading to the intermittent fault you describe. As to the far bottom right breaker? While there are no labels visible on it, it does appear to be a Murray type MM "double-stuff" breaker, which is correct for this panel.

If this doesn't solve the problem...

If getting the panel into a serviceable condition does not solve the problem, then further troubleshooting will be required. I would start by eradicating any backstab wiring connections from the circuit in question and replacing them with side-screw hookups, as push-in backstabs have this annoying habit of stabbing people in the back.

There is also the chance that the tab on the busbar was damaged by the use of the incorrect breaker to the point where no breaker will function properly when installed in that slot. In that case, you will need to remove the dodgy breaker, put a Siemens ECQF3 filler in its place, and then replace the breaker below it with a Siemens Q1515/MP1515, using one half for the existing circuit in that slot and the other half for the moved circuit. You'll also want to label the filler plate to indicate that the breaker space it covers is unusable if you do this.

Not the answer you're looking for? Browse other questions tagged electrical receptacle electrical-panel circuit-breaker or ask your own question.