What is this small triangle on this screw head?

This doesn't really relate to a problem I have (the screws work just fine), it's more of a curiosity question. Some of the screws I've used recently have a small triangle on their head, as if for lining up something: 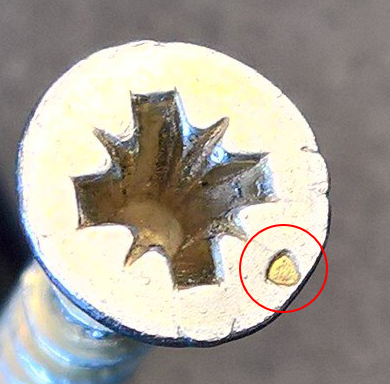 I was wondering what this is for, but couldn't really find anything.

What I did find was that bolts commonly have markings that relate to their strength, and screws often have manufacturer markings on their head, but this looks like neither to me.

After reading up a bit on screws of various types I noticed this small snippet in the German Wikipedia:

(Between 1967 and 1992 the screws could be distinguished by a punch mark on the head. Since 1992 the "SPAX" lettering is punched into the head.) — horrible translation by me.

It indeed seems to be a Spax screw and a bit worn. The cutting part of the thread is barely recognizable as such and the point is not quite pointed anymore. But other features are still there, such as the part of the head that creates its own counter-sink.

So I guess it came from some old wooden parts and I salvaged the screws. Or whoever. No idea where they came from, they were in my random screws drawers in the basement and just happened to be of the right size for what I needed.

When knowing what to search for one can also find images with that marking:

And it seems that some special-purpose screws still have the old marking: 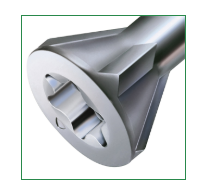 Well, learned something new about screws, that not all wood screws are equal, and that I didn't even have to pre-drill holes for what I've been doing recently.

Not 100% sure, but this site shows that the triangular marking is brand marking for INFASCO. While I could not find a pozidriv screw from them, here is a bolt with a similar marking. 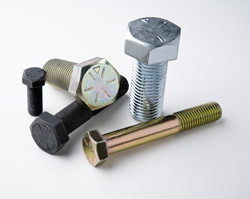 On electrical enclosures the screws have an arrow to show the position of the latch. This looks like a similar indicator so you know when the latch is locked into the frame when the door is closed.

1
What is the optimal screw drive hole shape to get the maximum torque for a steel screw?
0
How to resolve a rusting uPVC window fixing torx screw?
7
How can I choose the best lag screw / lag bolt?
1
What tool should I use to unscrew a hard-to-access hexagonal screw?
0
Trying to replace the adjuster screw on a screen door — low-profile threaded screw insert and bolt (identification needed)
7
What is the purpose of this inverted Philips head screwdriver bit?
54
How to avoid stripping screw heads?
0
What kind of screw for rawlplug uno?
3
What's gentler on screw heads: a regular screwdriver/drill, or an impact?