How can I set up a removable stair railing?

It looks similar to this except the knee wall meets the ceiling at the upper end: 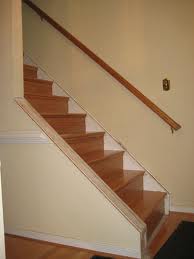 After consultation with my master-carpenter-looking-over-my-shoulder, Dan, the following solution was arrived at: 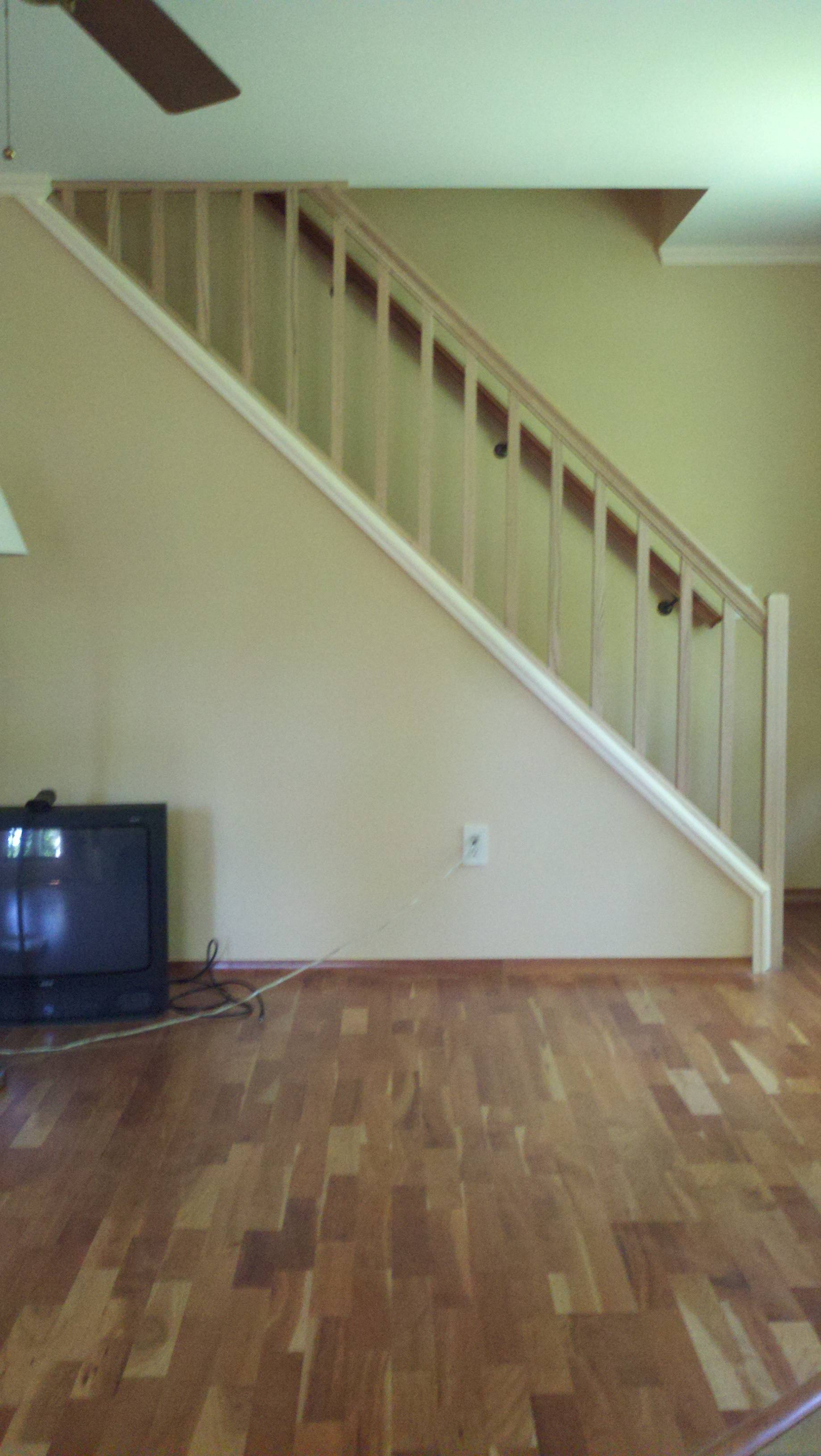 1.The newel post - built up from 1x3 clear oak boards glued together. Two are full length, one is beveled (before gluing) to sit on top of angled knee wall. Attached by two lag bolts at base and one lag bolt into handrail. 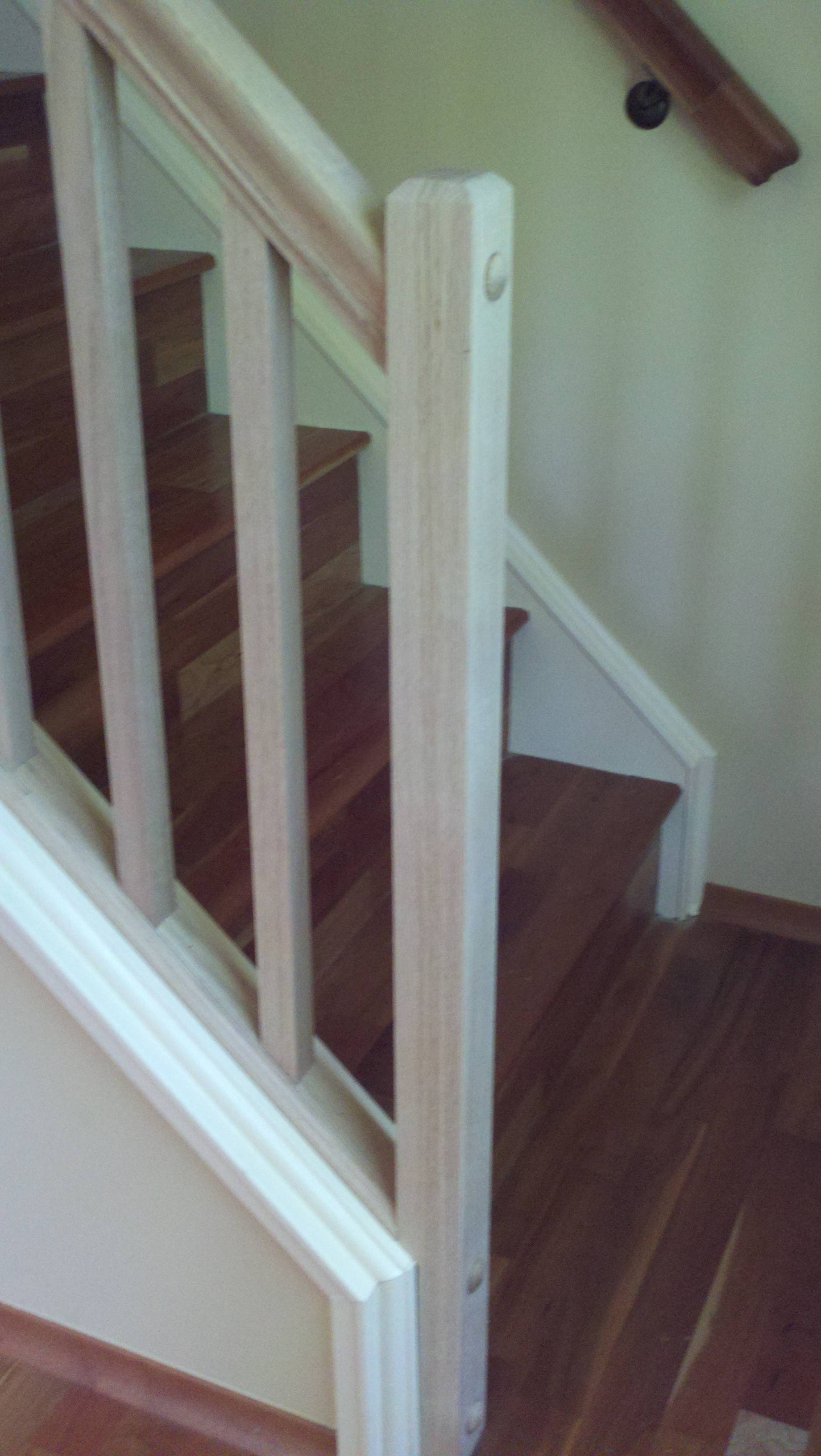 2.Base - shoerail molding (with trough cut out to hold balusters) 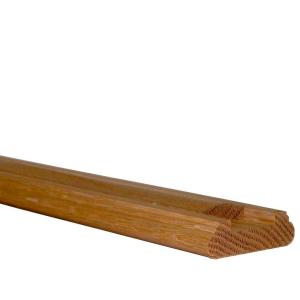 runs up the angled knee wall. The shoerail is cut into two sections directly below the spot where the handrail meets the ceiling. This will allow the railing to be separated into an upper section, bounded by the base and top rail, and a lower section, bounded by the base and handrail. It is attached with 1 screw in the middle of the upper section between two balusters. The lower section is attached with two screws, also inserted between balusters. 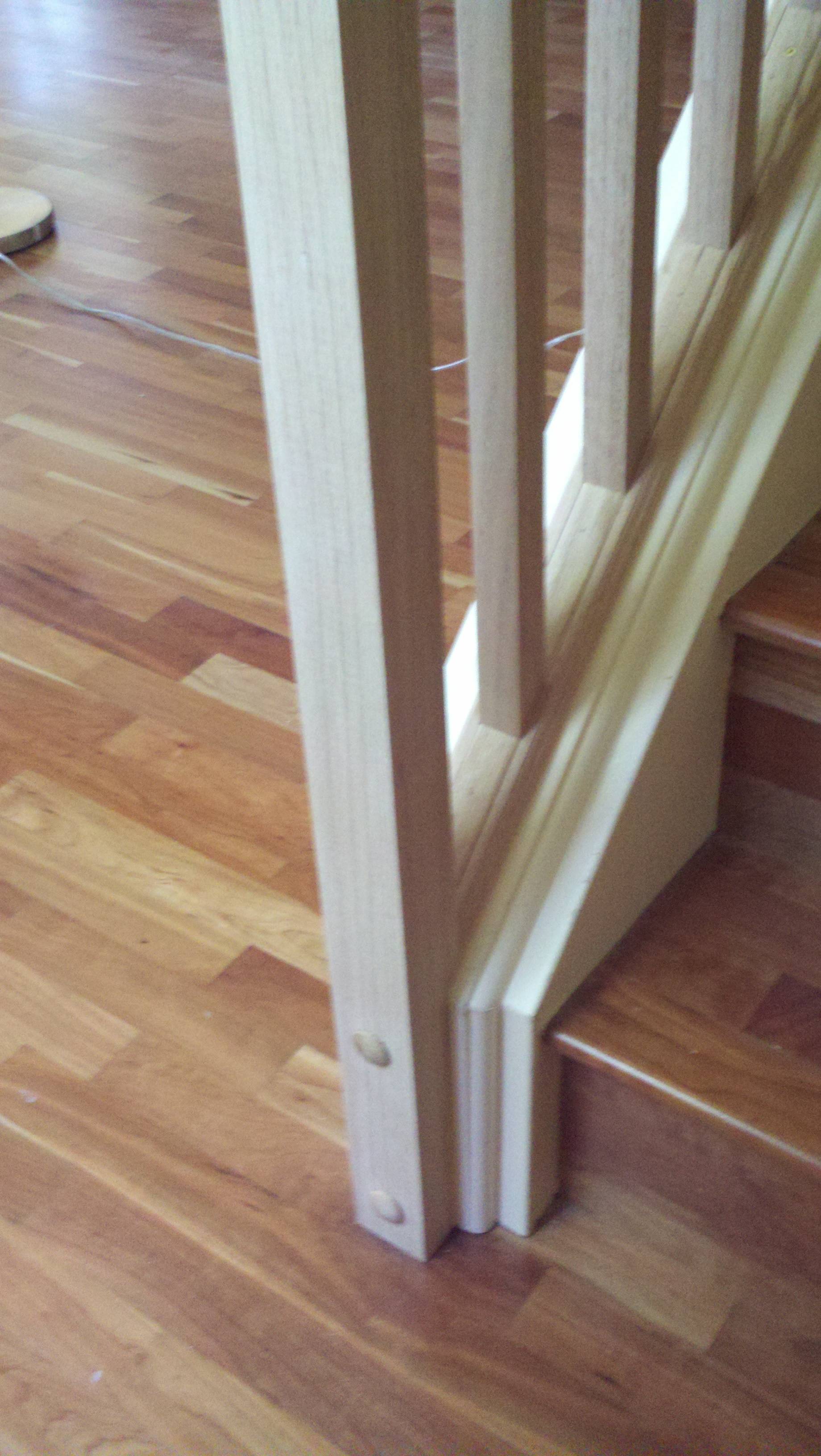 3.Top - shoerail is also used at the top in the same manner as the base. Two screws hold the top shoerail to the ceiling (screwed directly into studs at the ceiling/stairwell edge). 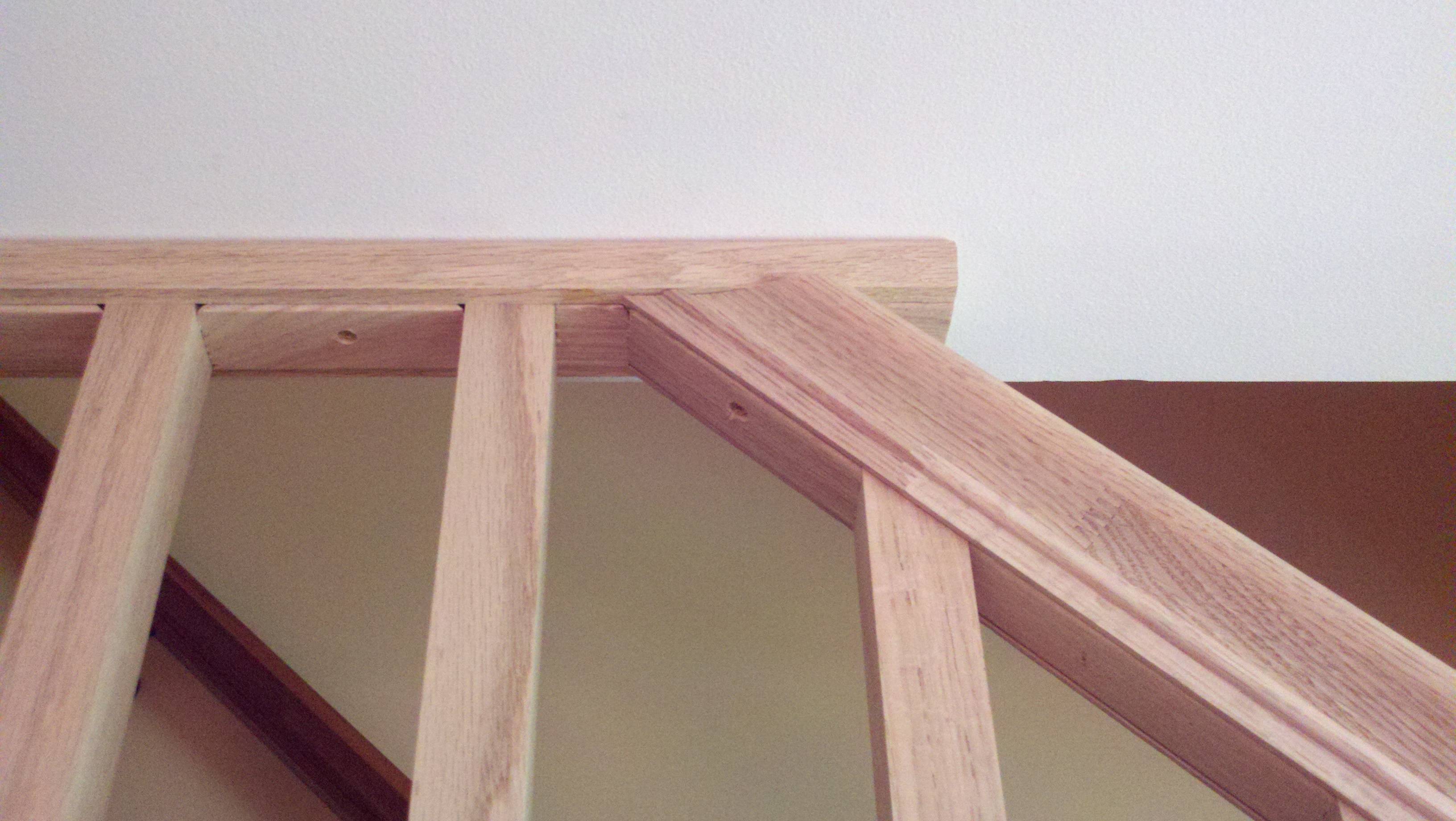 4.Handrail - Standard handrail (with trough) held in place at newel by one lag bolt and at ceiling by one long screw upward into stud.

5.Balusters - These are toenailed into base shoerail and top shoerail. For extra strength, blausters are glued before nailing (Nailholes will be covered by fillet pieces).

6.Fillets - these are the filler strips put into the shoerail moldings top and bottom to lock in the balusters. They are nailed into place after the balusters are inserted in the shoerial. The fillet peices that sit over the attachment screws, top and bottom, are not nailed in, but held by small recessed screws so that the can be taken out. 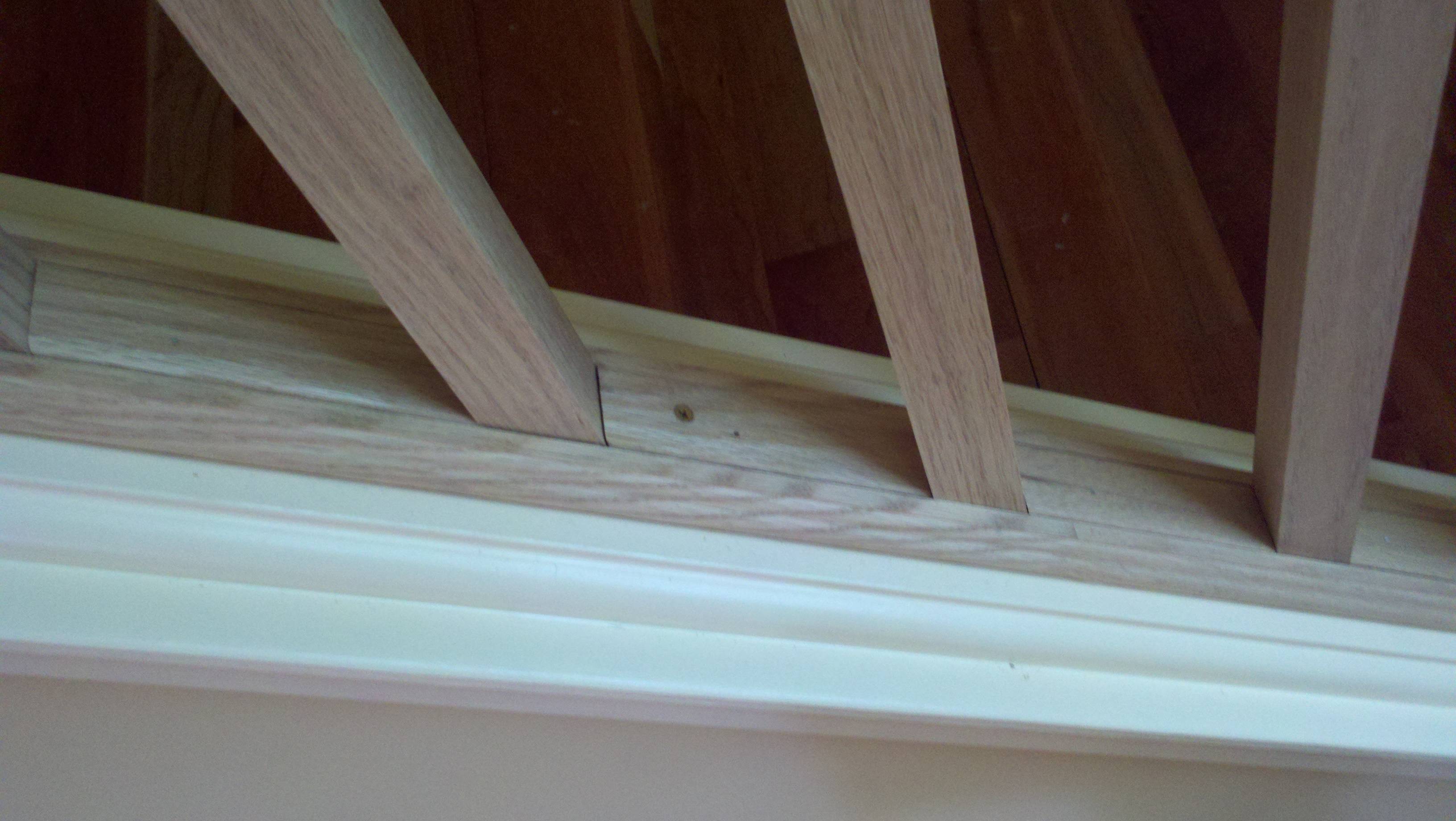 All nailing was done with an 18 gauge nailgun.

c)removing the fillet pieces covering the screw holes in the base and top shoerails,

d) removing the two screws holding the lower shoerail base in place,

e) removing the upper handrail screw at the ceiling,

h) removing the screw holding the upper section of the base rail,

i) removing the upper top/base/bauster assembly.

If you google "removable handrail" there are a lot of results. This video shows one that is pretty straight forward Basically you make it as a contained unit mounted on a lower board and then attach that lower board to the existing floor. To remove it, you just take up the screws and it's good to go.

Not the answer you're looking for? Browse other questions tagged stairs railing or ask your own question.

2
How can I join boards for table legs?
2
How can I attach a handrail to the wall so that it will be easily removable?

1
What is the order of installation for a stair railing?
5
Can I use a single cable for cable rails?
1
Do I really need a newel post at every change in direction in a banister?
0
Railing placement and removable railing systems
4
Interpreting stair railing code
0
How to make a stair railing
14
How do I repair my stair bannister?
0
How can I mate a stair skirt flush with the drywall below?
3
US residential stair railing code: What is the requirement for terminating an open railing?