Understanding my main box for Knob and Tube wiring

I'm trying to map all my circuits and prepare for replacing my knob and tube wiring. I have three boxes and when testing voltage I notice my central white wire isn't hot. I expect this to be the ground, but it has associated circuits that have no load. Is this box a two phase with red and black and the white is connected to ground?

My only confusion comes when I measure that every other fuse not have load. What fuses connect to the red wire? Everything on the left? 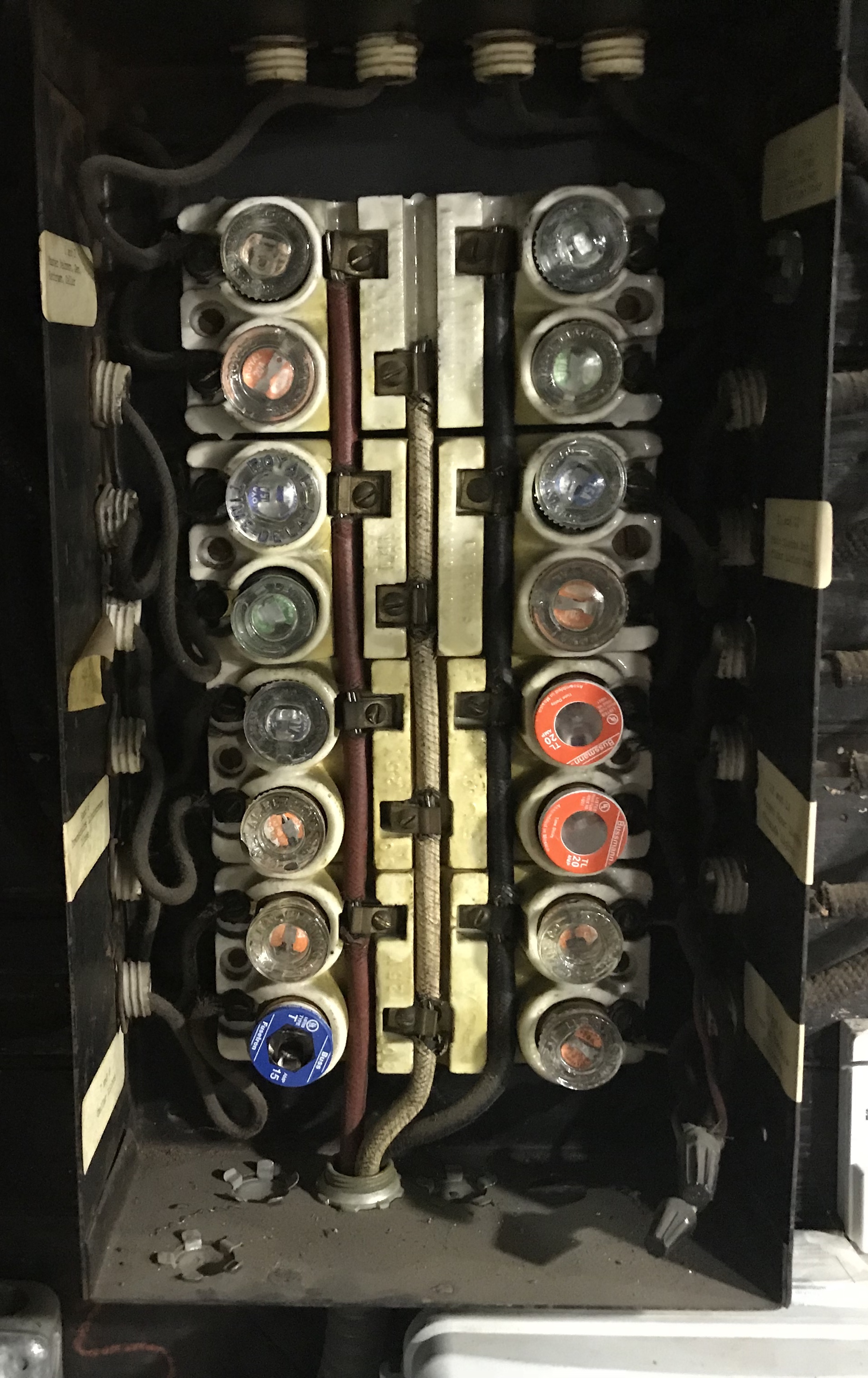 Wow, nice fuse panel. It's well preserved and probably still fully effective. You can only hope the modern panel you replace it with holds up so well!

Although we use it all the time, the term "hot" can be a little ambiguous.

Keep in mind that voltage is only meaningful between two things. Sometimes when referring to voltage to ground / earth, we'll just assume that's the other thing. So if we say "the red wire is at 120V," or "the black wire is at 120V," we really mean there's 120V between those wires and ground.

(There are ungrounded systems where there is voltage present between parts of the system, but no voltage to any of the conductors and ground, but those are seen in big industrial systems, not your home.)

I suspect you're testing with a non-contact voltage tester. Remember that these testers generally measure voltage to ground.

In the US, most single family homes are supplied by a Edison three wire service. In this system, there are two lines (red and black in your fuse panel) and a neutral originating on the same transformer winding. The lines originate at the end of the winding, the neutral, which is grounded, originates at the middle. There's 240V from line to line, and 120V from either line to neutral. 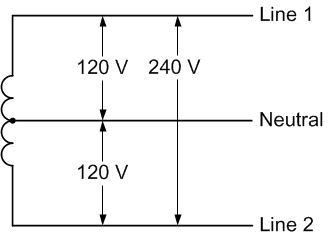 So with a non-contact voltage detector, you'll only detect voltage on line1 and line2, not on the neutral; it's grounded. But if you put one lead of a voltage meter on white, and the other on red or black, you'd read 120V.

I would like to take the time and thank you for a magnificent display of workmanship on the installation of this panel. I checked you bio and if you are truly a fan of history, then you might try to preserve it or at least document and photo this system as a part of our living history, once you replace it.

In answer to your questions: The white wire is the return, neutral or identified conductor and it does have current (flow) but not voltage (electrical pressure). Somewhere it is grounded or should be. Don't let the way the neutral is tied to the bus confuse you. You would need to take apart the panel to see how it is connected. Also your panel is two phase, those would be the conductors on either side of the neutral. I don't understand by what you mean by:

"load" on ever other breaker.

This is a true Fuse Panel with Edison based fuses not breakers in a Circuit Breaker Panel. I'm kind of a stickler on proper nomenclature.

Thanks again and Happy New Year.

You may recall hearing that "current travels in loops". That is true. Electrons that come into your home, into the circuit, must go back out again.

Likewise with the neutral wire. You measure zero voltage pressure. That tells you nothing about flow. Neutral is the normal return path for electricity. It flows exactly as much current as the hots. Exactly. That is how GFCI works, it compares the hot current to the neutral current and looks for "exactly".

Unlike water, electricity is pressurized all the way through, it's more akin to a hydraulic circuit (which also has near zero pressure on its return line). So if you interrupted neutral, full voltage pressure would back up behind the break. This is why we insulate neutral wires.

There is one little piece of information that everyone seems to have missed. This fuse box is indeed supplied by a 1 phase 3 wire service and the circuits on the left side are supplied by the red hot wire whereas the ones on the right are supplied by the black wire however, this box supports a total of 8 circuits (4 on the left and 4 on the right) since each circuit has both a fused hot and neutral. Therefore each circuit has two fuses.

In order to eliminate this dangerous situation it has been standard practice and required by code for many decades to only fuse the hot (phase) conductors. That way if a fuse blows the equipment/wiring it is protecting is guaranteed to not be live/energized unless it is being feed by multiple circuits and/or phases, which is a whole other issue which is dealt with using common trip breakers with multiple poles as well as multi pole switches.

Since your fuse box is likely close to 100 years old each circuit has both a fused neutral and a fused hot wire. That is why the fuse/wire in every other row of your fuse box will not register as hot if you touch it with a non contact voltage tester or measure its voltage relative to ground. Keep in mind the neutral is a grounded conductor since it is bonded to ground at the main disconnect/service switch as well as at the utility company’s transformer.

Not the answer you're looking for? Browse other questions tagged electrical knob-and-tube or ask your own question.