What can I do about a breaker that trips frequently on a Stab-Lok panel?

I have a 120V/20amp breaker that trips if I run a kettle boiler, toaster oven and microwave at the same time. The only other load on this circuit is a small computer/modem/wi-fi router running at < 55W (I have a meter on this part of the room).

The breaker does feel soft, and I was told it is old and tripping too soon (instead of when the load approaches 80% of 20AMPs). Is this assumption valid?

If yes, how do I order a replacement. Below is the panel and the breaker (last 20A one on the bottom). What is the model of this breaker so I can order online? I rent this house.

UPDATE 1: thanks to the strong warning & consensus here I've been able to convince the landlord to have a licensed electrician come take a look at the situation and hopefully replace the panel (with a new or possibly retrofitted one). I will update the question as the situation develops.

UPDATE 2: Both answers are of high quality and I am not sure which one to accept. I will wait a few days and accept the highest voted answer. I've been around SE sites for a while and just joined DIY.SE, but I think I will be using it very often. Thank you all for the great input! 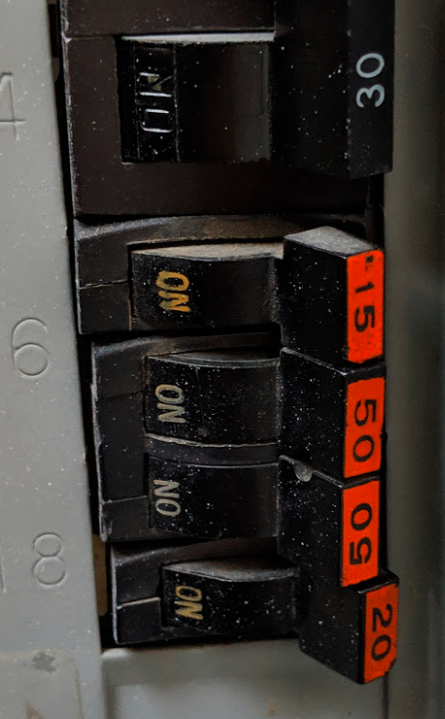 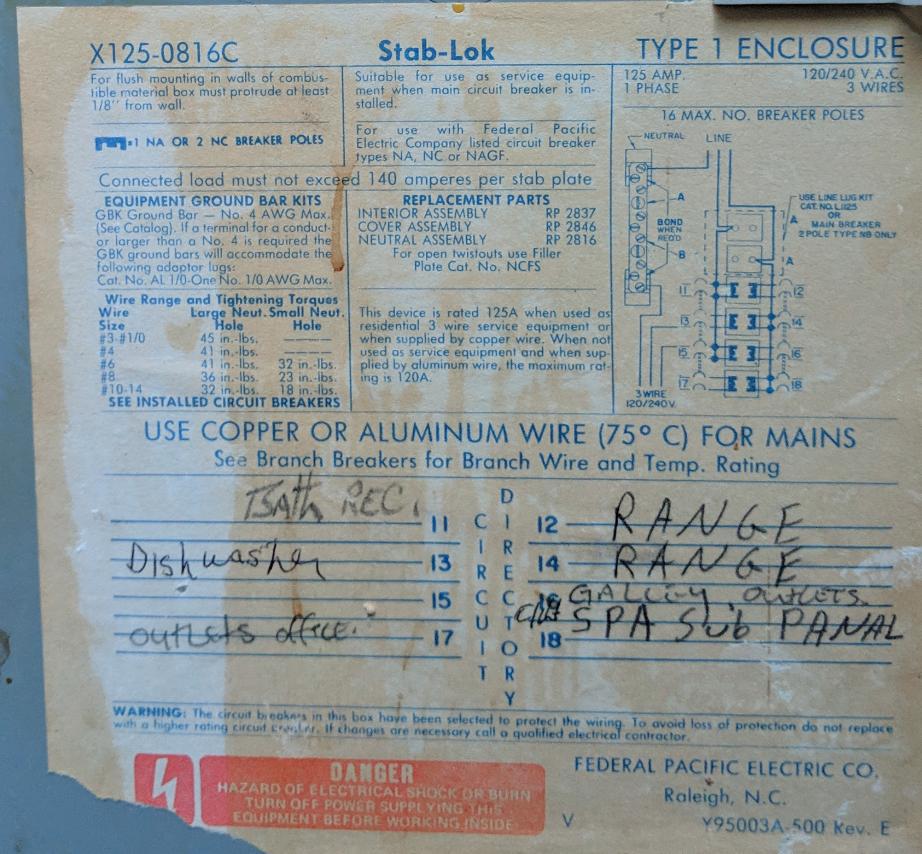 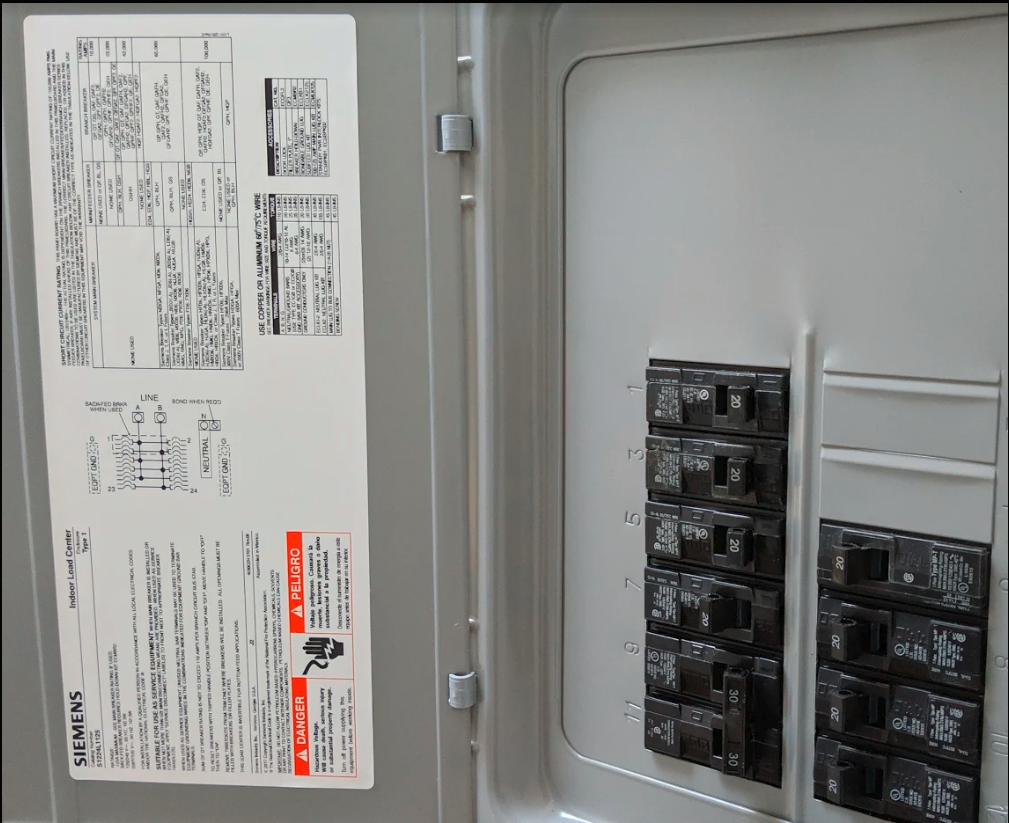 Now, what is the number on the circuit breaker that is actually tripping?

Uh huh. And that is normal. By law, kitchen circuits must be either 15 or 20 amps. You are overloading this circuit by nearly 2:1 (and worse, doing it on an FPE Stab-Lok, but we'll come back to that).

The breaker is supposed to trip.

Now, I gather you are following the math here. You're adding 10 and 12.5 and coming to a sad realization. It is true. You cannot even run even two of those loads at once on a standard kitchen circuit. Nevermind the Stab-Lok.

Now, to ease that, the Electrical Code has several new rules. First, in newer construction, each kitchen must have two 20A circuits dedicated to kitchen countertop receptacles. That still is not enough to satisfy your perfectly reasonable need, but Code is an absolute minimum. Yours is a picture postcard example why a savvy electrician installs more than two: one circuit per receptacle is not excessive. (One circuit per socket is ideal, but very expensive for technical reasons).

That said, I gather from the Stab-Lok that your building is not new construction, and the current situation is grandfathered. It was legal at the time it was installed, and there is no obligation to upgrade it, i.e. Grandfathered.

As a rental property, it is illegal for you or anyone who is not a licensed electrician to make any modifications to the electrical system. Even the landlord can't do it. His handyman can't do anything but simple socket changes. Must be a licensed electrician. Further, any work needs landlord permission, failing to get it is grounds for eviction.

Due to the foibles of Stab-Lok, you really don't want to make a habit of tripping that breaker. Seriously. You are creating exactly the situation Stab-Lok is known to fail in!

So this pretty much locks you onto one option: Only run one heat appliance at once.

Read the sticker on the back or the manual, it will state amps, which is what can't exceed 20 in total. If it does not state amps but does state "watts" or "VA", divide it by 120 (volts) to get amps. Mains voltage is 120 these days in the US. In our house, we learned their amp values, and know not to exceed 20. (Or 16 if continuous).

Now, about that Stab-Lok panel. The company is purported to have committed fraud when certifying the panel as safe. They tricked UL, sorta the way Volkswagen diesels tricked the EPA. There are separate problems with the breakers, and also with the panel busses.

What do breakers do? They protect the house's branch circuit wires from overheating and starting a fire in the worst place possible to fight a fire, inside the walls. You won't detect it early, you can't reach it to extinguish it, all you can do is evacuate and call the F.D. and the house is probably done for. FPE Stab-Lok breakers are notorious for sticking, and failing to trip when they are supposed to. Older breakers from this era were not made for frequent, repeated trips. Every trip "wears them out" somewhat. So you are really "playing with fire" by continuing to taunt the Stab-Lok.

Why don't they just make replacement breakers that are safe? No point. Stab-Lok panels have a second problem: the way the breakers attach to the power bus (specifically, they stab) has proven to be very bad news. It conducts poorly, heats up, develops a gap, starts arcing, and this arcing makes a great deal of heat - the more load on the circuit, the more heat. Main panel arcing is serious business, and again a firestarter.

So this old panel is just plain nogoodnik, and that is the consensus of most everyone in the business: these panels should be replaced ASAP. The company defended their panel saying they will only fail if (you do things like you are doing and which lots of consumers do) and CPSC said "shrug, we don't have the budget to test this". The upshot is, there is not a mandatory recall, and the company went bankrupt so there's no way to fund it anyway. So it is legal for the landlord to continue this one in service, and anyway, it does seem to be working.

* Heating elements are very cheap to make, so cost is not a factor. Heat appliances want to be as high-current as possible so they work quickly. 1500W or 12.5A comes up a lot because that is the max that UL will allow a resistor heater to have on a 15A plug. UL (Underwriters Laboratories) being the agency that tests and approves appliances for sale.

The problem is that US 120V electricity is very limited in how much power it can provide. In Europe, they use 230V, and circuits support nearly twice as much power. Kettles and such are typically 2500 watts because they can be, i.e. That is the preferable size for these appliances.

Count your lucky stars, and stop running all these appliances at the same time and/or rearrange things...

I am not certain why you are surprised that running three kitchen appliances of significant power output (likely all upwards of 1kW input power) would trip the breaker on a 120V/20A kitchen small appliance branch circuit, given that a 120V/20A circuit can only handle just under 2kW of continuous load, and 2.4kW of peak load. (If you want to be certain, simply add up the wattage ratings on the appliances in question and divide by 120 to get how many amps they together pull when set on full blast.)

As a result, I'd move one of the appliances (preferably the highest draw one) to a kitchen outlet on a different circuit -- that way, the overload on the circuit will go away and the breaker should stop tripping, because it's clearly doing its job properly at the moment (which is actually a bit of a surprise, read on for why).

Then tell the landlord to burninate this panel ASAP before it goes and burninates his tenants!

Your panel is quite clearly one of the infamous FPE (Federal Pacific Electric, also translated as Fire Protection Eliminated) firestarters. Due to a combination of multiple design flaws and a systematic effort to defraud UL, FPE breakers often fail to protect circuits when called upon to do so, and the panels they go in are known to overheat, throw sparks, and combust internally as well.

As a result of the unfortunate decision by the original installer of this panel to choose FPE over a more reputable manufacturer, neither you nor your landlord can count on this panel and the breakers inside to do anything besides be a ticking firebomb. In fact, due to flaws in the way FPE breakers connect to the busbars in the panel that distribute the power, it's possible that you could be starting a fire inside your panel as we speak, even though the breaker is tripping as it should! (It also sounds like the breaker is deteriorating internally from your description of its mechanical action as "soft".)

Given that your panel is already overstuffed by modern standards, there's only one way for the landlord to make your house safe to live in, and that's by replacing the panel wholesale with a new panel. We know the replacement needs to have busses capable of at least 125A (what the existing panel claims to handle), and needs to have as many spaces as possible -- the largest 125A panels have either 24 or 30 spaces, depending on what product line you are looking at, and going up to 200A bussing (if possible -- not all 200A panels can accept a 125A main breaker) gives you the option to go up to 42 spaces, or more in some product lines, provided physical space permits.

26
Should all Federal Pacific panels be replaced?
4
How can I tell if a breaker uses both phases/legs

2
Using a 100A main breaker in a 200A panel
8
4 awg wire too large for circuit breakers
2
two load centers on one meter
4
How to find out what breakers are compatible with my panel?
1
How to troubleshoot wiring that trips AFCI breakers?
1
200Amps panel difficult in clamping aluminum cable due to limited clearance
3
Best route to take when replacing an old panel without a main breaker
1
What alternatives to Stab-Lok breakers are there?
2
Circuit Breakers for Electric Baseboard Heaters
2
Will newer Siemens AFCI/GFCI circuit breakers handle washing machine loads better than older versions?