How can I separate a light switch to power two different devices?

My house had an addition after it was built - a covered porch which includes a lit ceiling fan. I very recently screened in said porch and love it out there. When the initial addition was put on, the single indoor switch which operates an exterior light was tapped to also give power to the fan and fan light. Kind of lame. I am interested in doing something different, such as providing full control of the fan from the inside switch and breaking out the wall mounted light into its very own switch. How involved is this project and what might the steps be?

This is a reasonable project if you have some experience with electrical wiring. You will have to take a look at the existing wiring, get the appropriate new parts, and replace the existing box and switches.

First, I'll assume that your current configuration is as such: supply power comes into your switch box. Wires leading to both your fan/light and your exterior light also run to this switch box. In your switch box there are 3 grounds (bare wire, all connected, and also connected to the switch and to the box if the box is metal), 3 neutrals (white, all connected) and 3 hots (black; supply is on one end of the switch, light/fan and exterior light blacks are on the other end).

That's the most likely configuration, but you should shut off power and check out the wiring situation before you do anything else. If that's right, you'll want to do the following:

You also mentioned wanting to add a fan control. For this you will need: a fan control dimmer, a 3-gang box, and a second hot conductor out to your fan/light fixture. If this were new wiring, you'd run a 14/3 with ground cable, which will have a white, black, and a red wire (and bare ground wire). In the switch box, you'd run the supply black wire to a switch (for the light) and to your fan dimmer (for the fan). Then you'd wire black to the light switch and red to the fan switch. On the fan/light fixture end, you'd wire black to supply the light and red to supply the fan.

In your existing situation, you'd need to add a wire to supply the fan separately from the the light. The typical ways to do this would be either replace the existing run of 14/2 cable with 14/3, or add a new length of 14/2 dedicated to the fan and keep the existing for light only. This choice is mainly one of doing whatever is practical given your construction options and materials on hand; either is OK.

Whatever you do, keep safe. Use a non-contact voltage test to make sure nothing you touch is live, and if you're uncertain, get a friend with more experience or hire an electrician to check your work.

Hopefully, your wiring is something like this, but much neater: 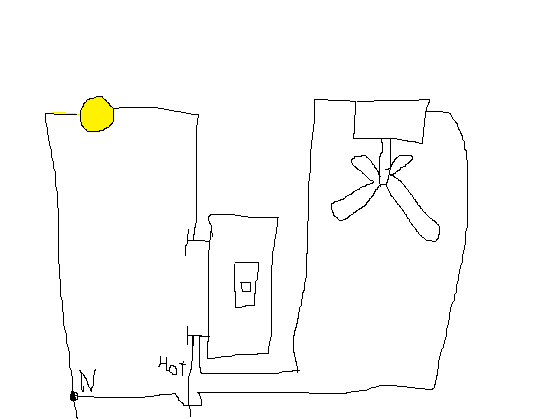 Of primary concern is that there is a neutral in the box. Otherwise, call an electrician.

You have three options. 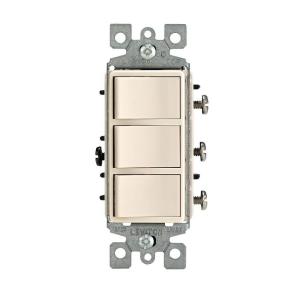 The advantage of the triple rocker is that you don't have to replace the box. You might be lucky, and have enough space for all the wiring in the existing box. However, I doubt it. Triple rockers can be annoying to use, as it's hard to hit the right switch in the dark.

Option B will work if you have limited space between the door frame and the next stud as you only need a 2-gang box. You could put the fan and fan light on the dual, and the external light on the single.

However, If you have room, you might as well put in the 3 gang box, and three single switches. Forget about renovators boxes. Cut the drywall, screw the box directly to the stud and patch the drywall later. I find trying to preserve existing drywall to be not worth the effort.

For full fan/fanlight control from the wall, you're going to need to pull more wire. Ideally, you should pull a 14/3 to the ceiling fan. Hopefully, the existing wire is only stapled near the switch and the fan, and you can get a screwdriver in to pull the staple. Otherwise, it's smashy-time again. Once you've got the wire loose, attach the new wire to it with lots of electrical tape, making the transition as smooth as possible. Use the old wire to pull the new into place. It's easiest if some feeds from the fan, and you pull from the switch.

So now, you should have three sets of wires in the box.

Take the black wire from the panel supply, and wire 3 (BLACK) pigtails to it. (Get the proper sized wire nuts). Each of these pigtails should go to the bottom of a switch.

Take all the white wires, and wire them together. Wire all the grounds together, and connect to the box itself. (If you have a plastic box, then you'll need to wire to the switch grounds, if they exist) 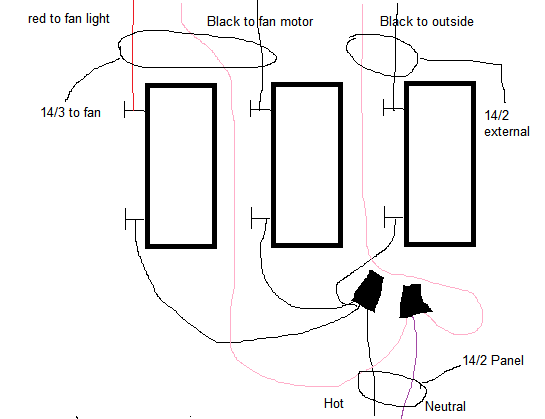 Mount the switches. If you're going to leave the box open for a while, then wrap some electrical tape over the terminals of the switches.

Wire up the fan. Most fans have 3 wires. Usually, two (black and blue or red) are wired to the supply. We need to seperate those, and wire the black fan wire to the black of the 14/3, the coloured wire to the red, and the white to the white. (also don't forget to connect the grounds.)

Mount the fan. Power on the breaker, and test the switches.

1
How do change the wall switch for my ceiling fan from a variable fan/light combination to a single on/off switch?
0
Replacing my light/fan/heater/timer with a light/fan/nightlight in the bathroom, with another light just to make things interesting
1
How can I get unswitched power froma switched circuit without running new cable?
1
Wiring two switches same box
1
Two socket fluorescent lamp OFF switch hot / not working with single bulb
0
Ceiling Fan w/remote, capped off red - but now dawn to dusk sensor on porch only stays on
0
How do I prevent an LED rope light from glowing dim when switched off?
0
Replacing an Intermatic EJ351 mechanical light switch timer with a wifi Smart Switch KS-602 timer in 1935 house
1
Fan control & 3-way light switch combo