Can Someone Help Me Identify This Switch?

I have a Swaby 5200 pump in my home, and I am hoping that someone out there might be able to suggest a replacement switch part number – or at least point me in the right direction.

The switch appears to be a double-pole, single-throw type. It has markings that indicate it might be a Tyco switch, but the only markings I can see on it are K395 and 0606 – neither of which come up in Tyco’s catalog. The switch attaches to the float’s rod with a cotter pin (split pin).

Here are photos of the switch (don't judge me for the duct tape residue; I would have never used duct tape on an electrical switch like this! It was the previous owners!). 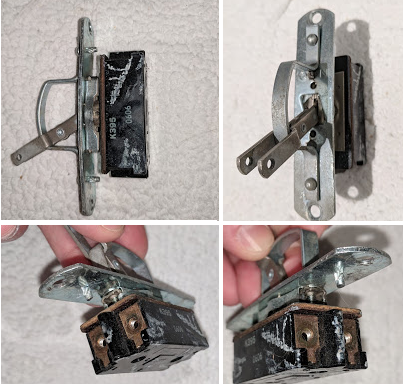 I am getting radio silence from the manufacturer of the pump, hence my desperate post here. Based on the advice I received when I bought the home, the mechanical components of this pump have many years of life left (the pump is regularly greased and maintained), and so I would really prefer to replace this switch vs. replacing the whole unit.

By the way, the existing switch appears to be "sticking" and not flipping to the on position when it should. This results in the pump not running, and the water backing up and eventually flooding the floor drain. Luckily I have water alarms and have been home to manually restart the pump... but this is not exactly sustainable.

EDIT 2018-Dec-17: I received a response from Swaby today. They are offering to sell me a replacement switch directly (it can be picked up from their Chicago office, or they can arrange to ship from their Houston facility). I will update with a formal answer once I have this resolved.

EDIT 2020-06-27: Wow, quite some time has passed. Sorry, all. I did obtain a replacement switch from Swaby BUT it was a significantly different switch. Replacement switch pictures and information are below. To install this new switch, I had to rework the electric, so it wasn't a job for the faint of heart. 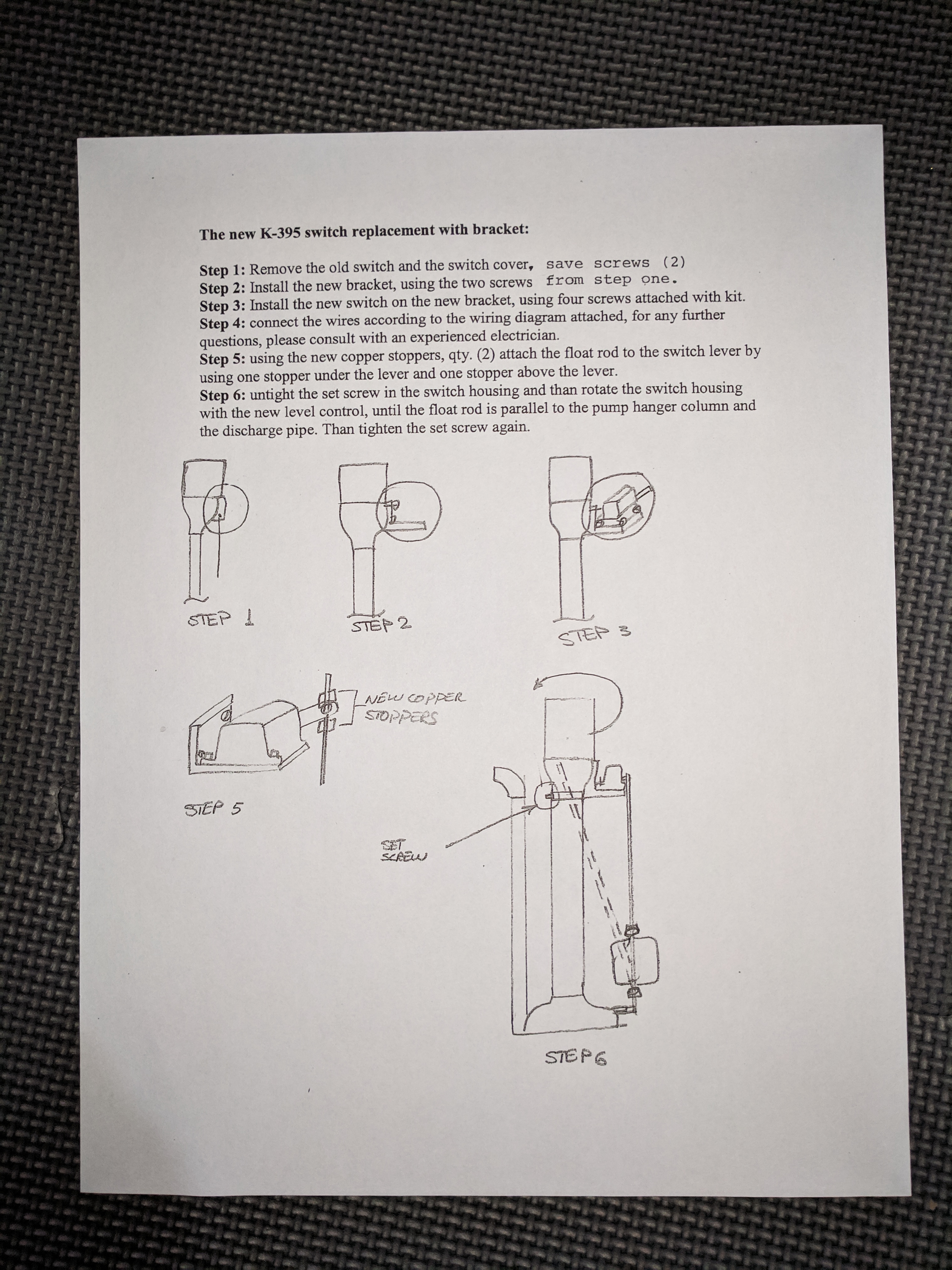 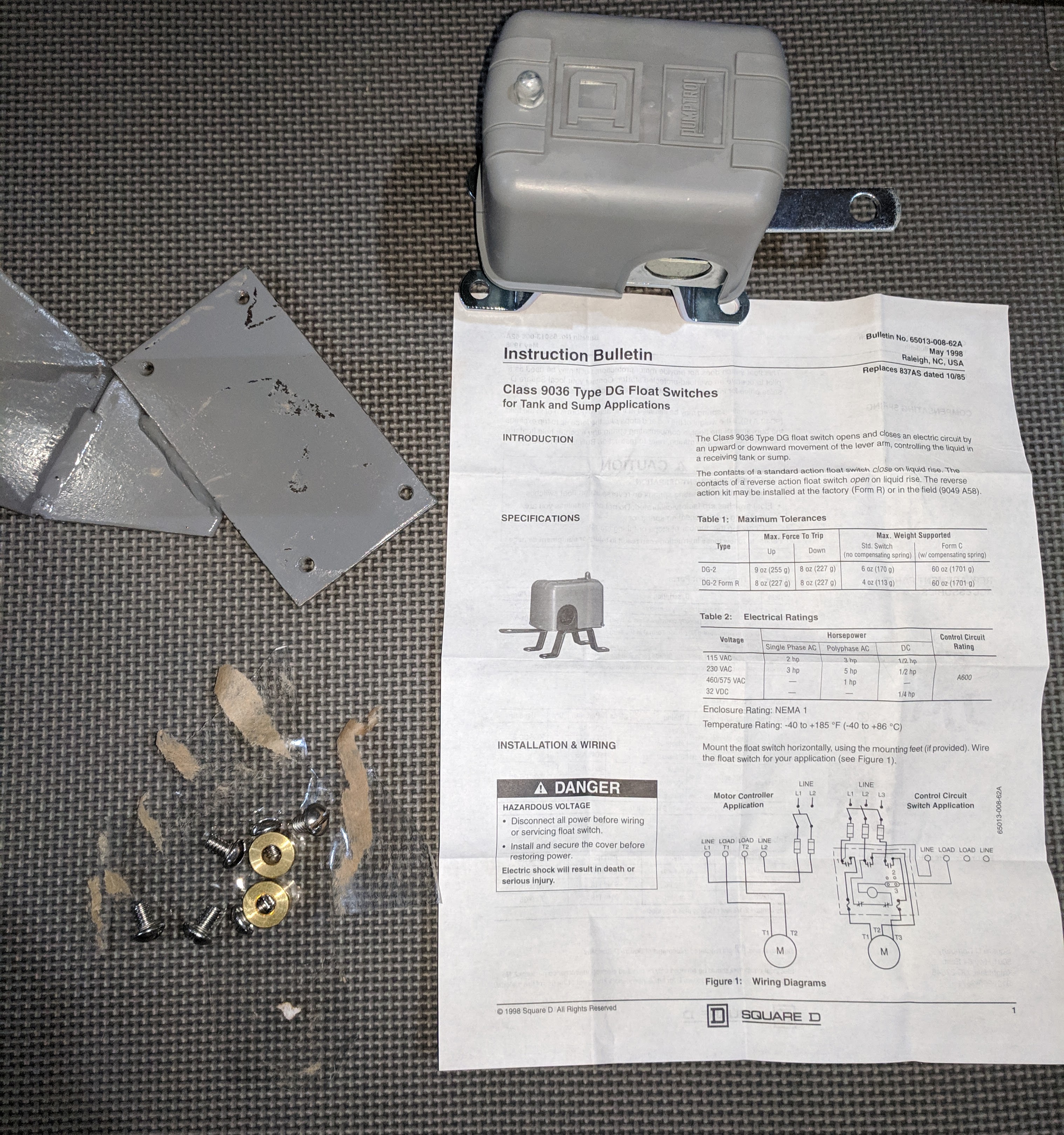 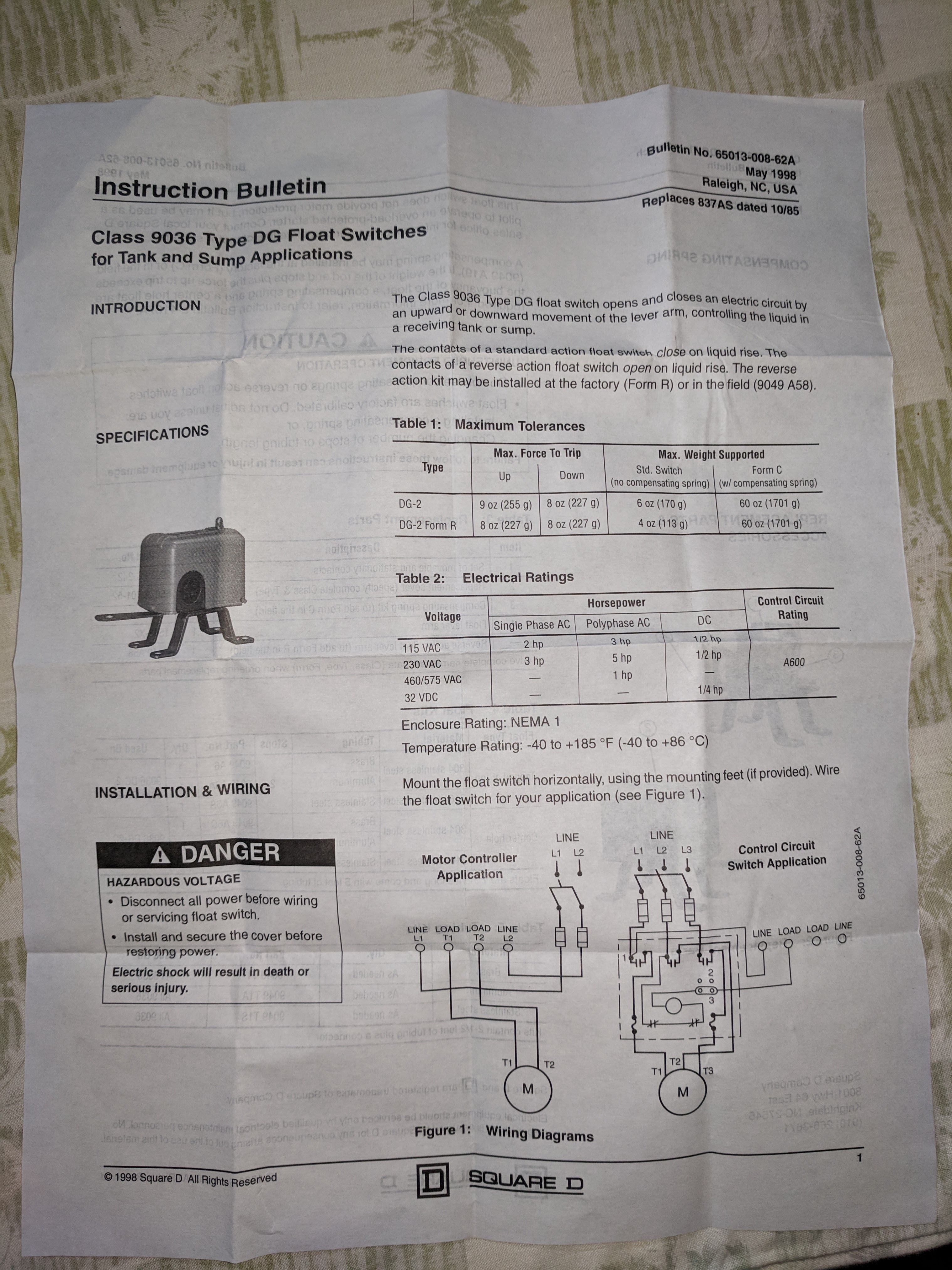 Here's the kicker: after I did all this work, I was still having problems. It turns out that the float had rusted through and was no longer exerting enough upward force on the switch. We ended up replacing the whole unit with a submerged pump.

Hey for anyone who hits with with an actual switch problem. I've fixed many a switch, by taking it apart, buffing and cleaning the contacts and adding a bit of dialectic grease.

This might not make a switch new, but it sure gets 'em working for a good long time.

I am going to make an assumption based on the text of your question; This is a sump pump situation. (Also Swaby makes all kinds of sump/ejector type pumps.) With this switch connected to the float via a rod and cotter pin means that this switch is meant to turn the pump on when the water level reaches a certain level. Additionally, when the water drops to a certain point it turns the pump off again. If Swaby can send you the identical replacement switch I think that would be a good way to go. I don't recommend trying to retrofit a non-OEM switch.
It appears that Swaby is now primarily in the market of large commercial and municipal type pumps. I can't even find a residential division. May I recommend a replacement pump. The big box stores will have several on the shelf. You size the pump is based on how high the water is to be pumped. Good Luck. P.

Not the answer you're looking for? Browse other questions tagged electrical plumbing switch pump sump-pump or ask your own question.

4
How full can my sump pit get before I should worry?
4
Should I use a float “piggy-back” sump pump switch?
3
How should I get my ejector pump out of the sump?
1
Sump Pit Bone Dry After Running Every 5 Minutes, How?
0
Can someone identify this fan switch (PHOTO)
1
Sometimes need to tap sump pump for it to turn on. Common causes?
0
Sump pump running continuously, float switch ok
1
Can someone explain this old switch wiring?