How can I reseal a shower drain on a pre-formed shower base?

The shower drain in my first-floor bathroom leaks. Based on looking from the basement below, it seems the leak is at the point where the drain assembly should clamp to the shower base (which is pre-formed fiberglass/plastic). This is confirmed by the ability to wiggle the drain assembly a bit relative to the shower base, and by the fact that the pieces of putty that remain seem to be coming loose from on top.

So to fix this I'd like to loosen the drain from the shower base, insert new putty, and re-tighten.

Here are the views from above and below: 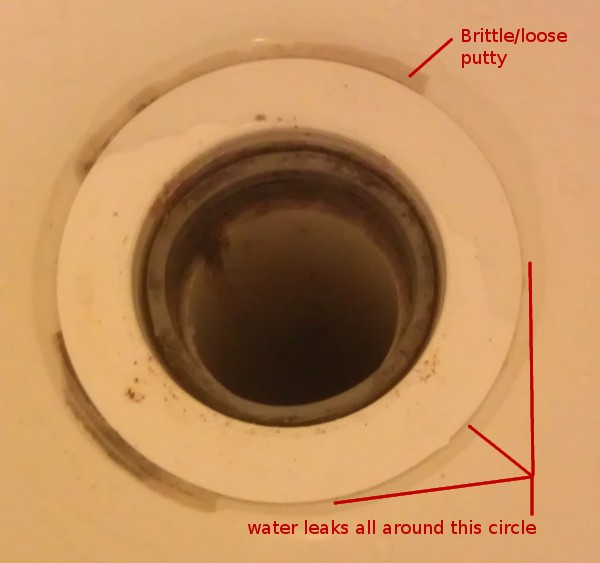 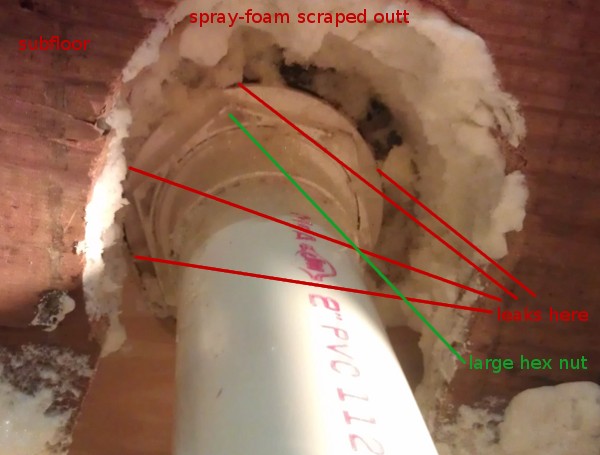 I think that what I need to do is loosen the large hex nut visible from the bottom. If I understand correctly, this should loosen the drain from the shower base, and possibly also loosen the compression fitting of the drain around the PVC drain pipe.

Unfortunately, I don't seem to be able to get the nut to budge! Because it is only reachable through the hole in the subfloor, I can't really get a normal wrench around it. Trying to move it with my hands or with screwdrivers inserted into the slots in the nut doesn't seem to work either. Maybe the nut was made harder to move by use of PVC cement, or the spray foam that used to fill this area.

So, how can I move this nut so I can reseal the drain?

Remove all the old putty you can. Roughen the surfaces that contacted the putty with coarse sandpaper. Clean the shower base and drain surfaces where the putty was a well as you can. Fill the resulting gap with self-leveling polyurethane sealant. Do so in a way to not trap air and to fully fill the void. Once that stuff cures, it'll never leak again!

If you do have to remove the drain in the future, simply cut thru the sealant with a sharp knife.

Sawzall is your friend.

Depending on how comfortable you are with plumbing, using a Sawzall with a fine-toothed blade and some steady hands should allow you to cut the nut on either side and then bust it off with a chisel and hammer.

This obviously implies destruction of the drain; so it will have to be replaced. The primary bit to preserve is the shower enclosure itself.

This video was very helpful to me, because starting at 1:13 is shows the instructions for removing an old shower-drain from a pre-formed shower using a hand saw.

(The rest of the video is an advertisement for a drain designed for pre-formed shower-pans.)

Not the answer you're looking for? Browse other questions tagged plumbing shower drain pvc or ask your own question.

2
How to install sink drain pipe correctly
0
Leaky Shower Drain...Caulk or Replace?
1
Repair shower drain leak
0
Can I use fiberglass shower drain for tile base?
0
Can i use butyl caulk on a shower drain?
7
How do I fix broken screw flange in shower drain?
2
What is the correct material to reseal a shower pan to a drain pipe?
2
How can I reduce my 2" shower drain to match my 1 1/2" ABS drain plumbing?
0
Does the plumbers putty applied around shower drain need to dry up?