Did I just ruin the flange on our toilet?

The point where the elbow joint from our flushometer meets the toilet bowl has begun leaking (dripping, really) whenever we flush (so, whenever water passes through it). I jiggled it a bit and the elbow joint popped right out. So the connection seems to be an unthreaded pipe with a plastic gasket that slides into a threaded mounting ring (is that the right term?) that then threads onto the toilet. update: it's a slip joint nut

The gasket appears to be intact, so I think I can fix this by reinforcing the seal at the threading. I have a jar of pro-dope, a tube of durst pipe thread compound and a roll of what teflon tape.

Am I on the right track here? and Which should I use for the best seal?

PS. What is a flushometer? Ours is a Sloan Gem for a "back spud bowl" (vs. a "top spud bowl") -- it reaches the toilet via an elbow rather than a straight pipe. Our toilet is a ways out from the wall so the joint has been extended by about 8".

Update: not using the toilet wasn't really working for us so I took a stab at using pro-dope and re-assembling.

Here's the halfway point, after I unscrewed the slip joint nut: 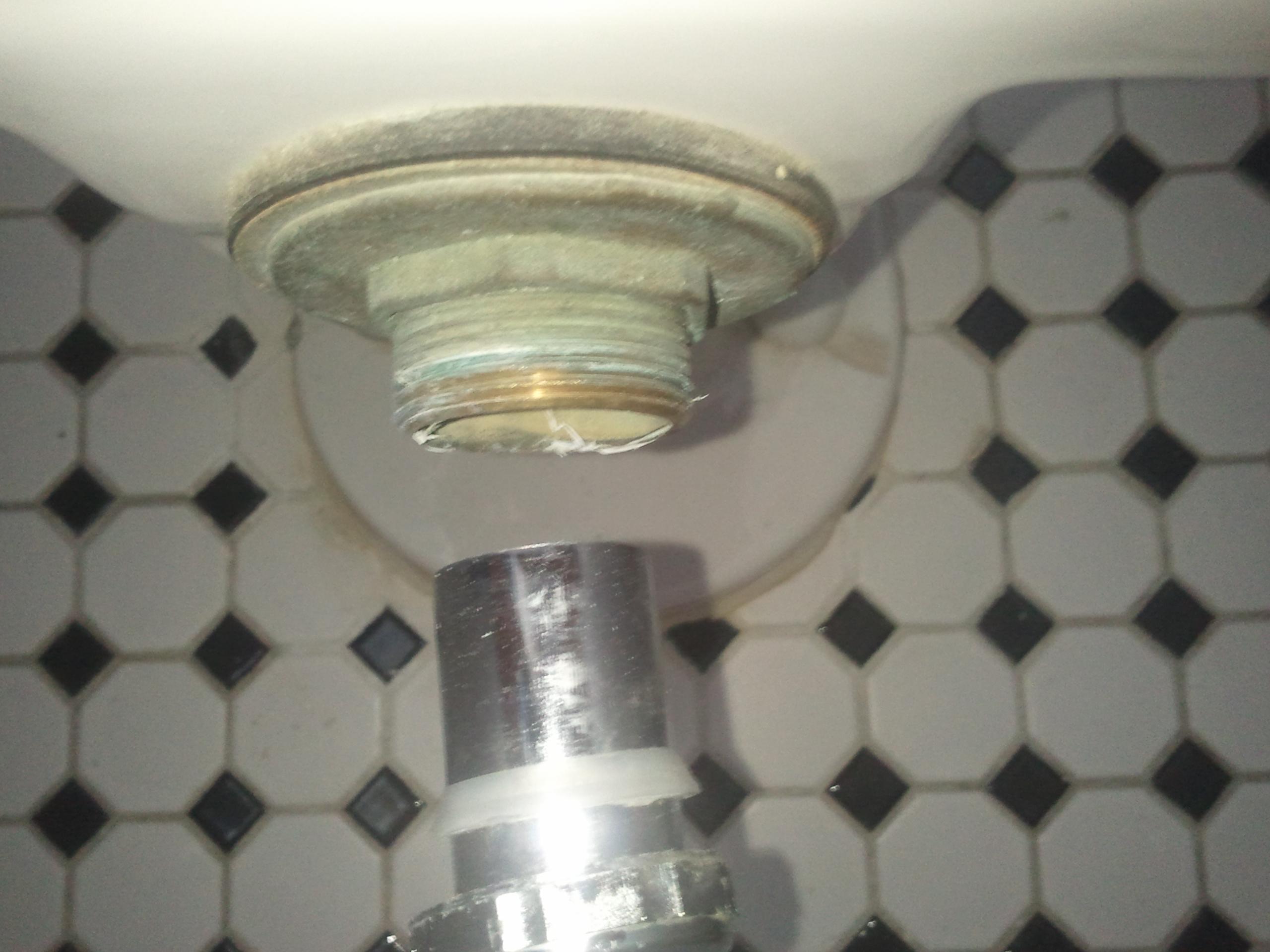 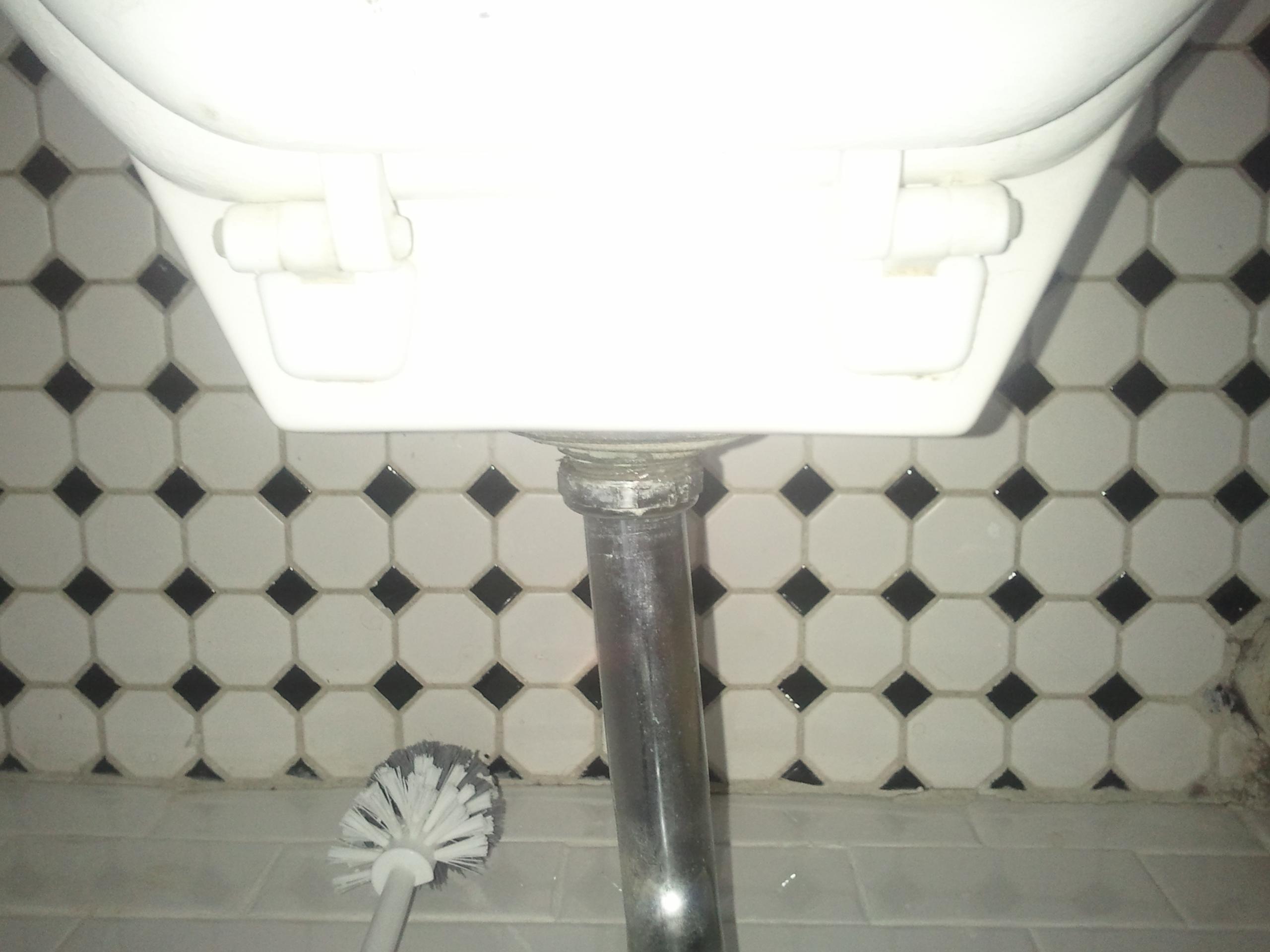 You can kind of tell from the after image that the toilet and the flushometer aren't properly aligned so the elbow joint doesn't meet the toilet at a proper 90° angle.

The issues with the compression fitting have been addressed.

The brass flange fitting, the rubber gasket, and the threaded pipe is the "toilet spud". Replacements are available if the rubber is perished or the metal parts somehow damaged.

The flange nut looks pretty well bonded to the threaded portion. Soak well with WD-40 and let it soak in. There are splines inside the spud on which one would apply an internal spud wrench to keep the threaded pipe part from turning. You may find some other chunk of metal that will wedge against the splines, which in turn can be held by a conventional wrench. Holding the spud in place, remove the flange nut with a suitable tool.

Examine the parts and evaluate if replacement is necessary. If the rubber is not too far gone, it may be possible to clean it, treat it with some sort of rubber treatment, and reinstall. If the rubber is cracked, hardened, rotted, or brittle, it will need to be replaced. The nut should be tightened firmly enough to ensure the rubber seals well against the toilet, but not so tight the rubber gets pushed out of position or the toilet gets cracked or broken.

You have probably damaged the seal between your toilet and the flange. This seal is usually formed by a wax ring that forms closely to the flange and toilet base when the toilet is installed. If you've moved the toilet significantly, you may have opened up a hole in this seal where water can leak when your toilet is draining.

It's sometimes possible to improve the seal by readjusting where you've positioned the toilet. But you probably won't have a good seal unless you fully remove the toilet, scrape out the existing wax ring, and re-seat the toilet using a new wax ring. This is definitely worth doing because a leaky wax ring can drip water into your subfloor for a long time, causing rot and other damage. Plus at the same time you can turn your flange and/or flushometer so you get a better fit between the flushometer and toilet.

You've probably only damaged the wax ring. However, if your toilet remained bolted to the flange while your friend turned it, it's possible you've damaged the seal between the flange and your drain. You should inspect that when you have the toilet up.

By the way, the fitting between your flushometer and toilet is a compression fitting. These are not designed to accommodate an angled installation -- for best results the nut needs to be perpendicular to the incoming pipe. You should try to straighten the joint, and also find a new plastic compression gasket to replace the existing worn one.

1
What should I be aware of as I prepare to replace my bathroom vanity with a wall mount sink?
1
How do I deal with a leaking toilet cistern inlet pipe?

1
How do I deal with a leaking toilet cistern inlet pipe?
2
Question about picking best wax gasket for toilet (specifically Toto)
1
Toilet flange spacers and closet horn seal
1
Sudden leak from toilet after years of no problems
2
What should I use to seal the ball rod on a pop-up sink drain plug?
0
Toilet flange no longer over pipe
0
Replacing toilet tank gasket
0
Locating toilet tank leak: flapper or flush valve or tanks bolts and washers