If I am understanding the inherent capabilities of each, it may not be possible to do GFCI and surge protection simultaneously, but i wanted to ask the experts.

Of course it's possible to cram everything into a box, but it's not necessarily wise or constructive. It's perfectly possible to put those things elsewhere.

A great deal of confusion about GFCI arises from most people being acquainted with a combination device which has both a GFCI unit and a receptacle. They think the two are one and the same.

Actually, a GFCI unit is nothing more than a black box, which provides GFCI protection to downline loads. Electrically, it looks/works like this.

(Disregard red, blue, yellow and orange; you don't have them.)

They are simply taking this black box, sticking a couple sockets on the right side, and selling it as what you know. Actually that GFCI can be a standalone module, or even part of a GFCI+circuit breaker combo device down at your panel.

All this to say, the GFCI does not need to be at the socket location. It can have its electricity fed from a GFCI in another location.

This is even easier. The surge protection provided in cheap power strips is rubbish. Presumably you are trying to protect your equipment from surges from other faraway equipment, not your equipment itself. They also make commercial grade surge suppressor modules which can be attached at any accessible junction box along the circuit, or the panel itself. These are sturdy modules that will provide lasting protection. 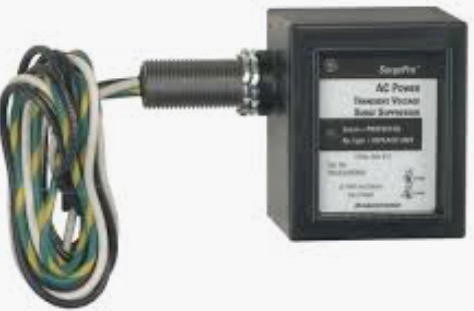 With the surge protection and GFCI offsited somewhere upstream in the circuit, you are now free to use any common USB receptacle or USB/NEMA 5 combo receptacle.

Not the answer you're looking for? Browse other questions tagged bathroom gfci or ask your own question.

10
How should I address my bathroom's flickering lights and GFCI tripping mysteriously? (Schematic included.)
14
Can I add a standard receptacle on a GFCI circuit
3
How can I provide GFCI protection to my kitchen receptacles?
5
Does a GFCI receptacle provide overcurrent protection?
1
Problem plugging surge protected power strip into gfci outlet?
3
Possible wiring configurations for isolated dishwasher location (satisfying 2014 NEC)
0
Dangers of bootleg ground and GFCI?
0
Can I add a receptacle from a bath fan switch box?
0
Remove shower enclosure for tiling but keep shower base only