A minimal regimen to remove the last bits of oil paint after applying stripper?

What is the best way to remove the last bits of softened paint in the panel crevices after applying paint stripper, shown above at right?

I've applied multiple passes of Dumond SmartStrip; each time I've covered the surface with either Dumond's paint stripping paper or plastic wrap, similar to the technique mentioned here, and waiting a full 18 hours before using a plastic putty knife to scrape off the liquified paint. Interestingly, in my half-and-half tests (below, second image from right) between Dumond paper and regular plastic wrap, the plastic wrap consistently worked a bit better, helping the stripper to soften and remove more paint.

Here's a sequence of four such passes on a door:

I've been using paint prep TSP-replacement cleaners, but it's not that effective on the paint while discoloring the wood, as shown below on this jamb: 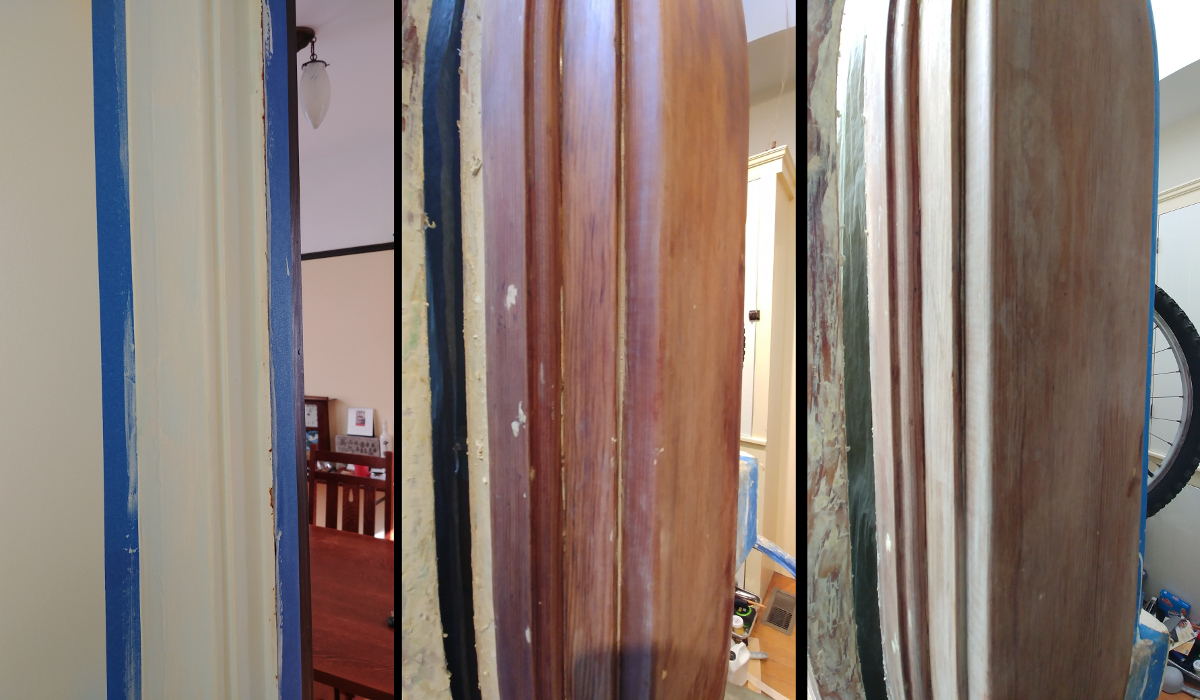 As shown in the right-most photo, the cleaner is removing the 100 year old finish under the layers of paint.

I'm worried that the cleaner is actually discoloring the wood, rather than leaving a neutral bare surface that I could sand and stain.

Does anyone have any suggestions for a minimal regimen to remove the last bits of paint and stripper? This is oil-based paint with lead, so water cleanup doesn't do much.

Am I right to be worried that the wood will be damaged by Krud Cutter / Goof Off / et cetera, or can I use those solvents to scour the surface and then restain without a sign of a struggle?

Browse other questions tagged wood hardwood-refinishing paint-removal or ask your own question.

1
What is best product for stripping paint from wood?

8
Do I NEED to remove the wood trim to sand and re-stain it?
1
How can I remove paint left from an appliance dolly from the front of a washer?
2
DIY Deck Stripper Formula
1
Would a paint stripper brush remove stain and varnish from a door frame?
2
How best to remove fumes after applying polyurethane in a hardwood refinishing project?
1
Is a "painting pad / sponge square" indeed the way to get a smooth wood surface after applying polyurethane?
6
How can I remove sheet metal screws from the wrong side of a wooden board with minimal damage?
0
How can I feather the edge between still stuck paint and the layer below? (Latex did not stick to gloss oil paint)
1
How can I remove craft acrylic paint that has been mixed with silicone oil from multiple surfaces?