I removed this non-load bearing wall in the corner of my basement, now 2 doors upstairs rub on their frames. Why is this?

In the image below, notice where the small 1x1 bits are, running perpendicular to the ceiling joists. These was used by the previous homeowner to lower the ceiling in one room, so if you can imagine, the wall he built next to them would run next to that last one on the right.

This wall has been removed for about 2 months now, and in the last week, 2 doors within a 8 foot radius directly vertical of that jack post have started rubbing on their frames. One had shifted at least 1/4", the other about 7/16"

I got worried and figured obviously that's sinking. So I went out and got that post, installed it and cranked it up - the doors upstairs started to line up better, but they still rub. I can only assume if I tighten it more they'll go back to normal, but I'm not sure it's on the right joist.

In the original house floor plan, that wall was not there, so I'm very sketched out - the wall really did not appear to have any load on it! However, I'm worried that when the previous homeowner did the basement, he might have weakened the joists substantially and conveniently made up for it with that wall - see, he notched all the joists about 3/4" to fit heater pipes under the ceiling.

I am also suspicious that I may have caused the metal post on that main beam to sink, where you see the new PVC pipes sitting and waiting to be put into a wall, I jackhammered on 3 sides of it to make room for the pipe. I barely touched the concrete support for that post, I took off a 4"x4"x16" chunk from one side though. Could the vibration have pushed the post down?

Anyways, I'm going to be gone for 2 weeks and I don't want my house to collapse or all the tiles to crack while I'm gone. What do you guys think could have caused this sagging, and what should I do to prevent it from getting worse? 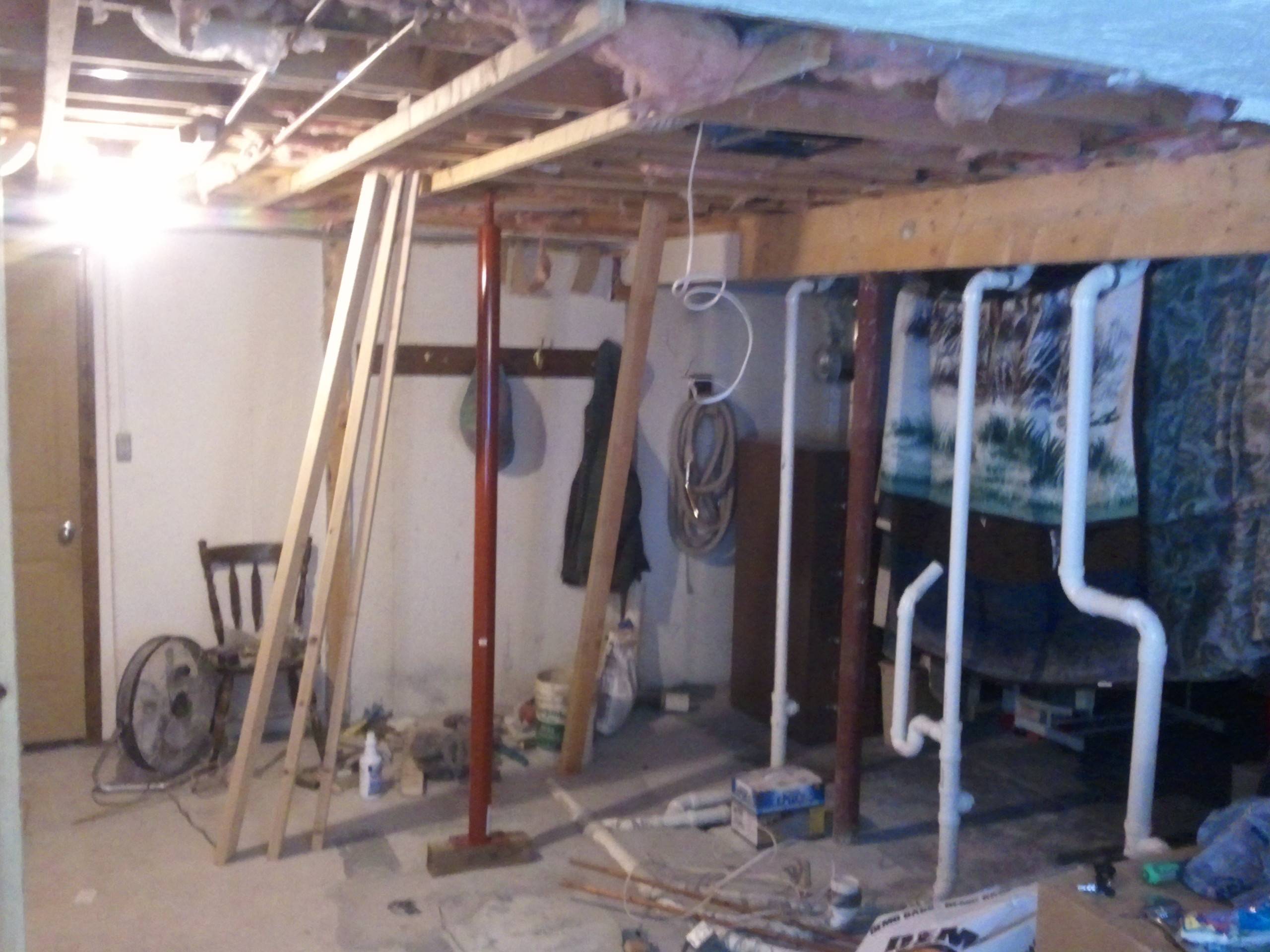 I really don't know where to start on this question.
There are several steps that need to be done, and soon before any serious damage is done. First, you need to stabilize the situation. Several joists must be supported at once via a temp bridge support ( 2, 2X8's upright, spanning several joists) held up by your temp house jack, but two would be better. One on either end.

Then you really should get the advise of a pro to evaluate your situation. If you have a main lolly column sinking, that is a problem. The 3/4 inch cuts should not be much of a problem, but they should have been made in the center of the joists, not an edge. Are there any cracks traveling from these cuts? If not, then they are not the problem. I have several theories, but without actually seeing the layout and taking measurements, it is impossible to properly evaluate. Get a pro in there, don't take advice that is not based on an inspection of the problem.

Well, as you suspect, it obviously was load bearing. Maybe unintentionally so.

Why was it bearing a load? Perhaps the current joist span is over the max. Under-engineered. That fact that the joists were notched is likely part of the problem too. When you notch a 12" joist by 3/4" it then becomes an 11 1/4" joist, which obviously can only carry a smaller load.

Your best bet is likely to get another beam in there somehow, and support it at both ends. Might need an engineer to look at things.

Not the answer you're looking for? Browse other questions tagged walls load-bearing or ask your own question.