Why would my GFCI breaker trip when I flip a switch?

I am working in my basement where the wiring is from the early 70s. I am replacing a couple of fluorescent lights with new ones so I can put in LED bulbs (the others are original). I am not new to wiring and have done quite a bit. I learned from my dad (and I also know his style). I got into mess from right at the beginning. 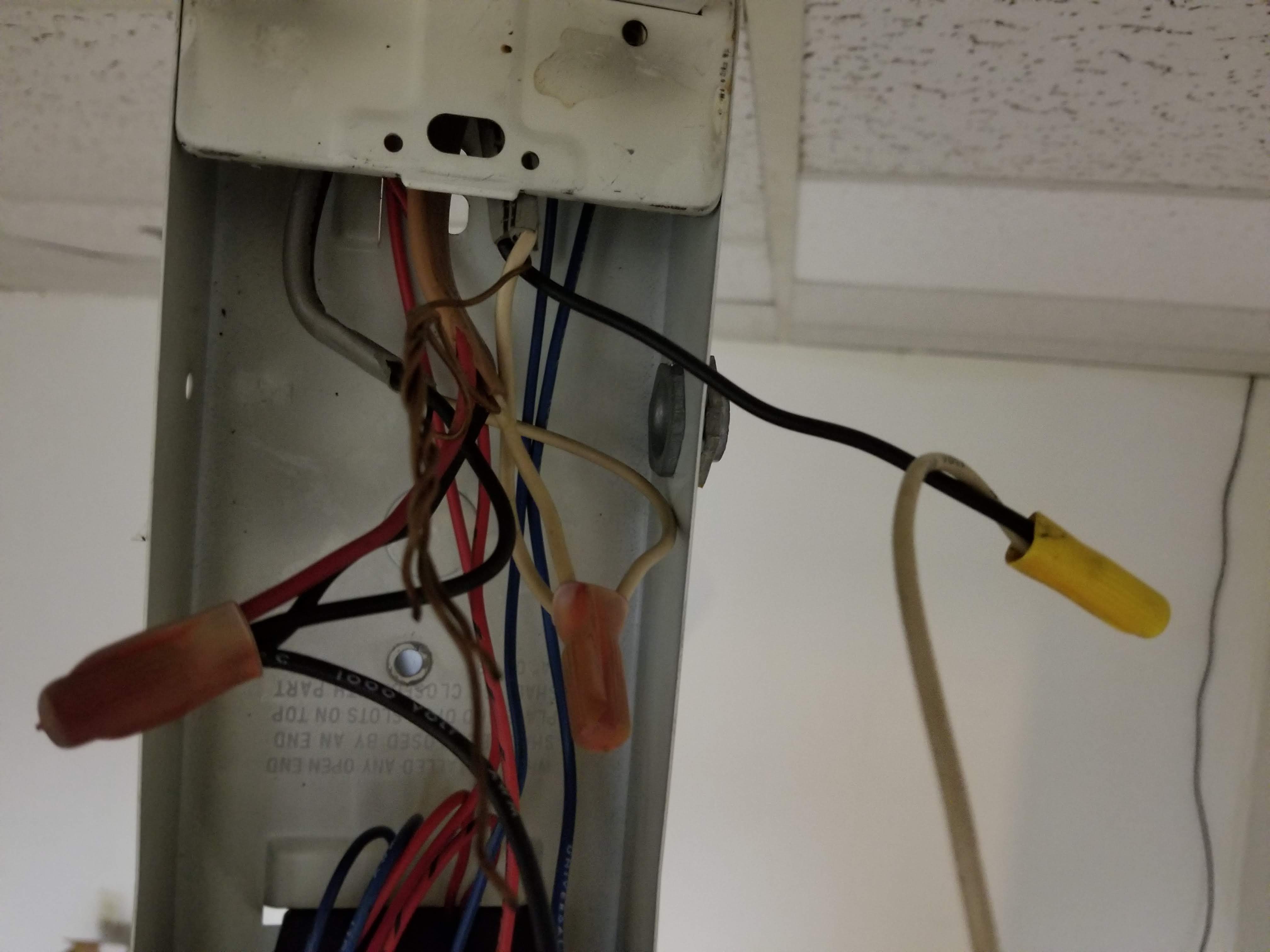 I should clarify this. The two wires heading down out of the picture is to the light fixture.

Not knowing what the heck was happening there, I started tracing wires. One set is the hot wires. The other 14-2 goes to a switch. The 14-3 I was confused about for quite a while, but finally figured out that it powers the outlets 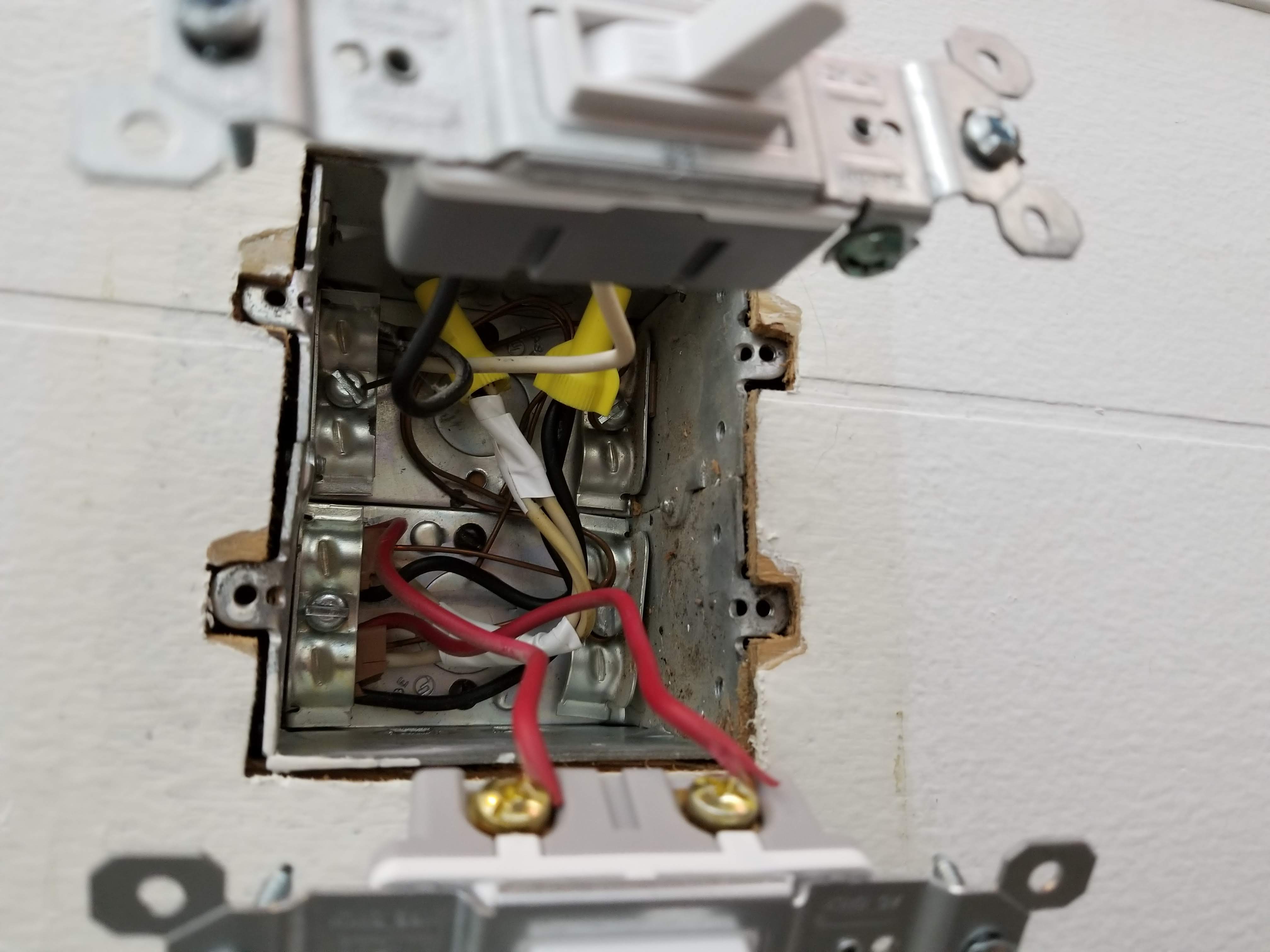 . The red goes to a switch the power the top outlet, the black keeps the bottom outlets hot full time. I matched the wiring back up and tested it. My GFI breaker (in a separate box flips and separate circuit). I do some more looking, and "properly wired" the switch for the light (I really didn't like how they wired it). 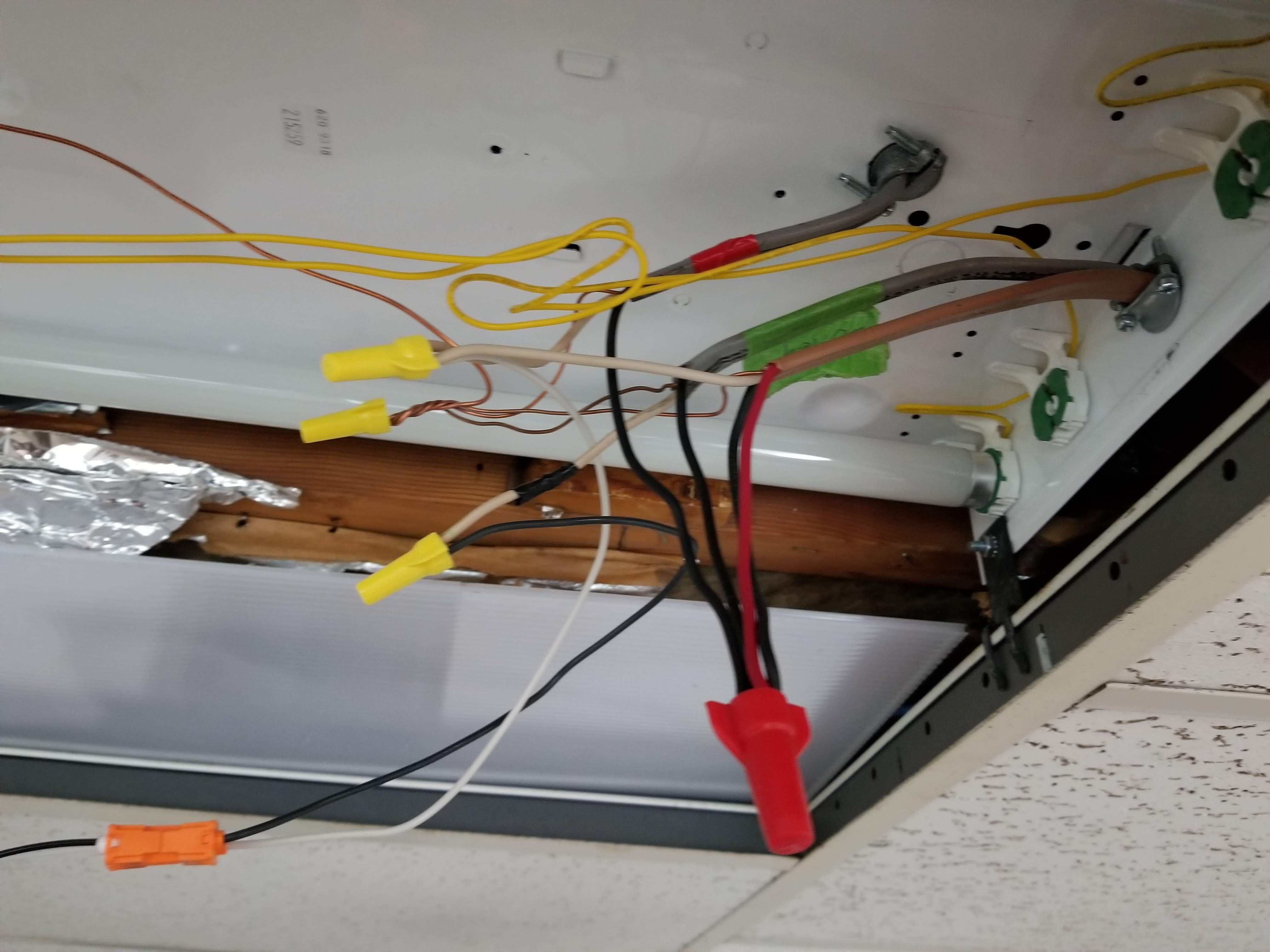 (The green tape is labeled switch). Tried again and it still blows the GFI breaker. All of the grounds are wired correctly, all of the commons are linked correctly. Could these new ballasts blow an older GFI breaker?

If you want I can upload a picture of how I currently have it wired, I can. I am at a loss of what is happening. I'd hate to call an electrician for something that could be a simple fix.

Here are the boxes. This first one is the box I'm working in. 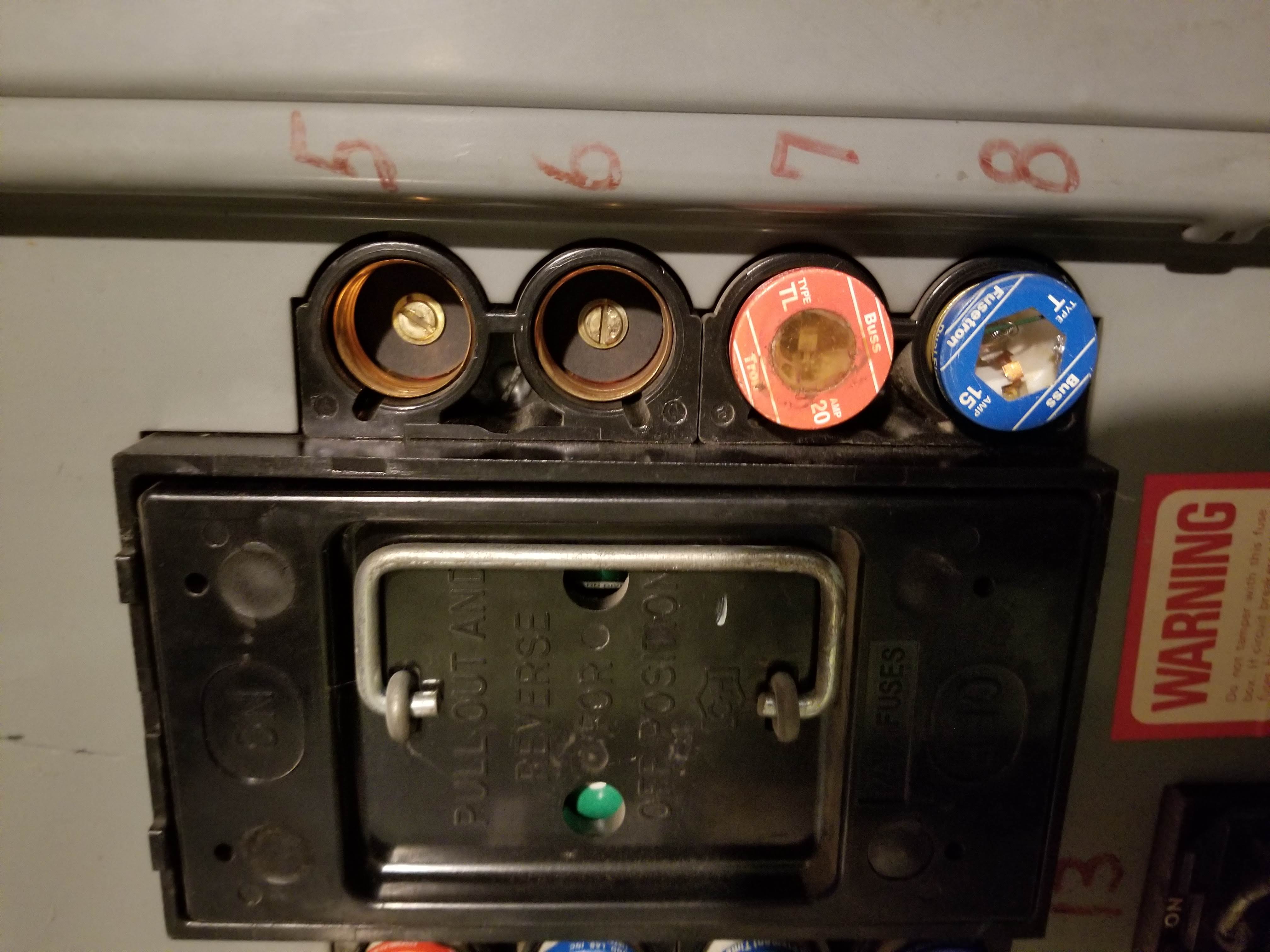 This second box is where the GFCI is tripping. 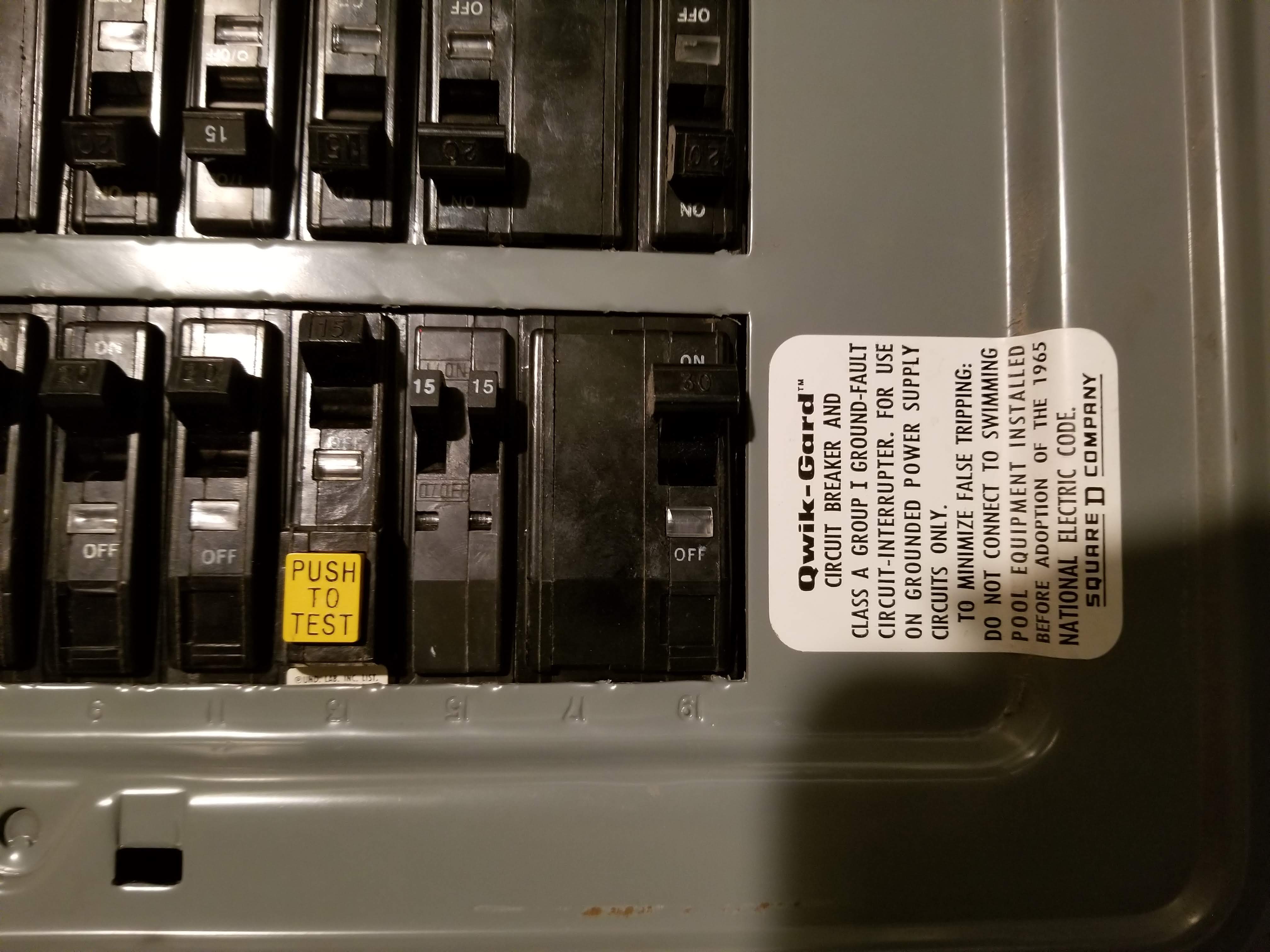 On the other hand, I discovered that the outlets are all twisted and soldered wires then covered in tape. I am going to fix that crap right away and fix the open grounds that I discovered as well in this series of outlets.

Update: Added more pictures and added my second light without any issues.

First, don't sweat bullets over the last guy's work. "The last guy did a bodge job and I had to fix it" are famous last words, said right before your project goes sideways into "hire an electrican" land.

Stay in focus. Keep the project scope as small as possible, don't try to fix two different things at once.

You mentioned "common", and that's a typical way an electronics or automotive guy talks about mains neutral. In electronics, everything connects back to a "common" which is a big groundplane, or the chassis of the car, and in those cases, that is the normal current return. Not in mains wiring.

In mains wiring, the closest thing to "common" is actually the Equipment Safety Ground (green/bare wire), and it is not a current return at all (except during a fault condition). Other than that, mains electrical is wired like an isolated system where both supply and return are 100% separated from the groundplane. What's more, circuits are isolated from each other - or at least, they're supposed to be. The reason is EMFs and eddy current heating, but this also bears very heavy on GFCIs. They work like this:

The GFCI is a simple current transformer. It wants to see currents are equal (sum to zero) in all conductors.

As said, circuits mustn't share neutrals, and you can see the havoc that would follow if circuits did. Even if a circuit was not on GFCI, but it returned neutral on a circuit that was on GFCI, it would guarantee a GFCI trip on that unrelated circuit.

I think that is the root of your trouble.

Not the answer you're looking for? Browse other questions tagged wiring light-fixture gfci or ask your own question.

4
Strange light switch wiring... why would neutral and hot be connected?
4
Why does a GFCI breaker trip when another breaker is accessed?
1
Why am I getting nuisance trips with my GFCI breaker?
3
Why am I getting shocked when my breaker and switch is off?
1
20amp afci breaker with gfci outlet tripping under 15amp load, but not lower loads
3
Safe to combine GFCI switch with non-GFCI switch?
1
Why is the load circuit on my GFCI outlet dead?
6
Can you trip a breaker from a different circuit?
1
GFCI tripping when circut is off at breaker - is there a short?