What is the best way to add new stud framing above fireplace and tie it into existing framing?

I've purchased a 55" TV and a pull-down mount to put over my fireplace so I can pull the TV down when in use and guests won't have to crane their necks. This is the overall layout of my fireplace and room (please forgive my amateur SketchUp mock): 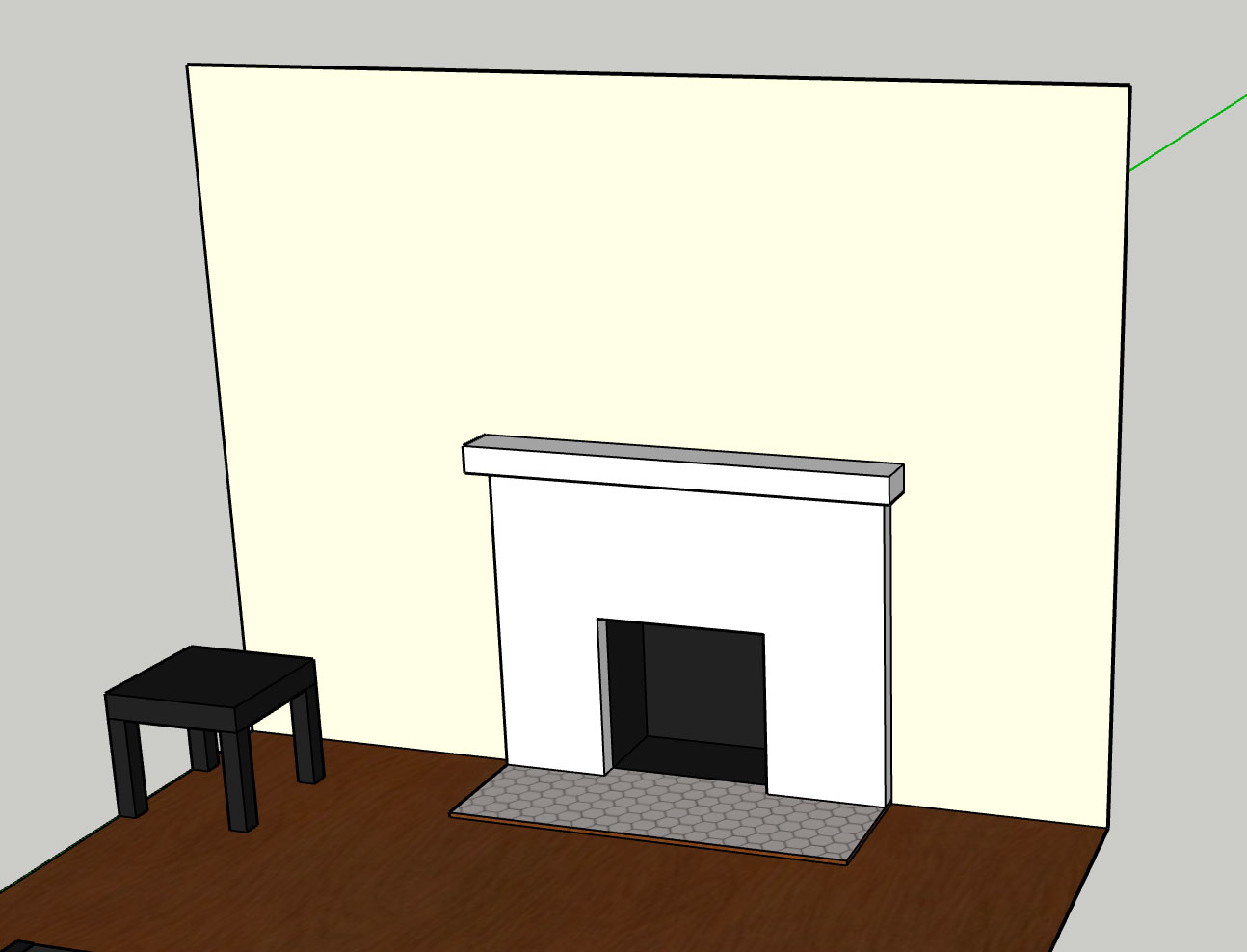 Unfortunately, the drywall above the fireplace is attached directly to the brick with no studs in between. I understand that some mounts can be mounted to masonry, but with the additional force from the pull-down mount, I'm not comfortable with this solution (and neither is the manufacture).

So instead, I'm using this predicament as an opportunity to build a fireplace surround, and bump out the area above the fireplace with a new stud wall in front of the existing drywall. Sort of like this (sorry, SketchUp merged my studs together; the outer full-height studs are meant to be king studs with jack studs nailed to them, and a 2x4 "sill" connecting them on top of the jack stud): 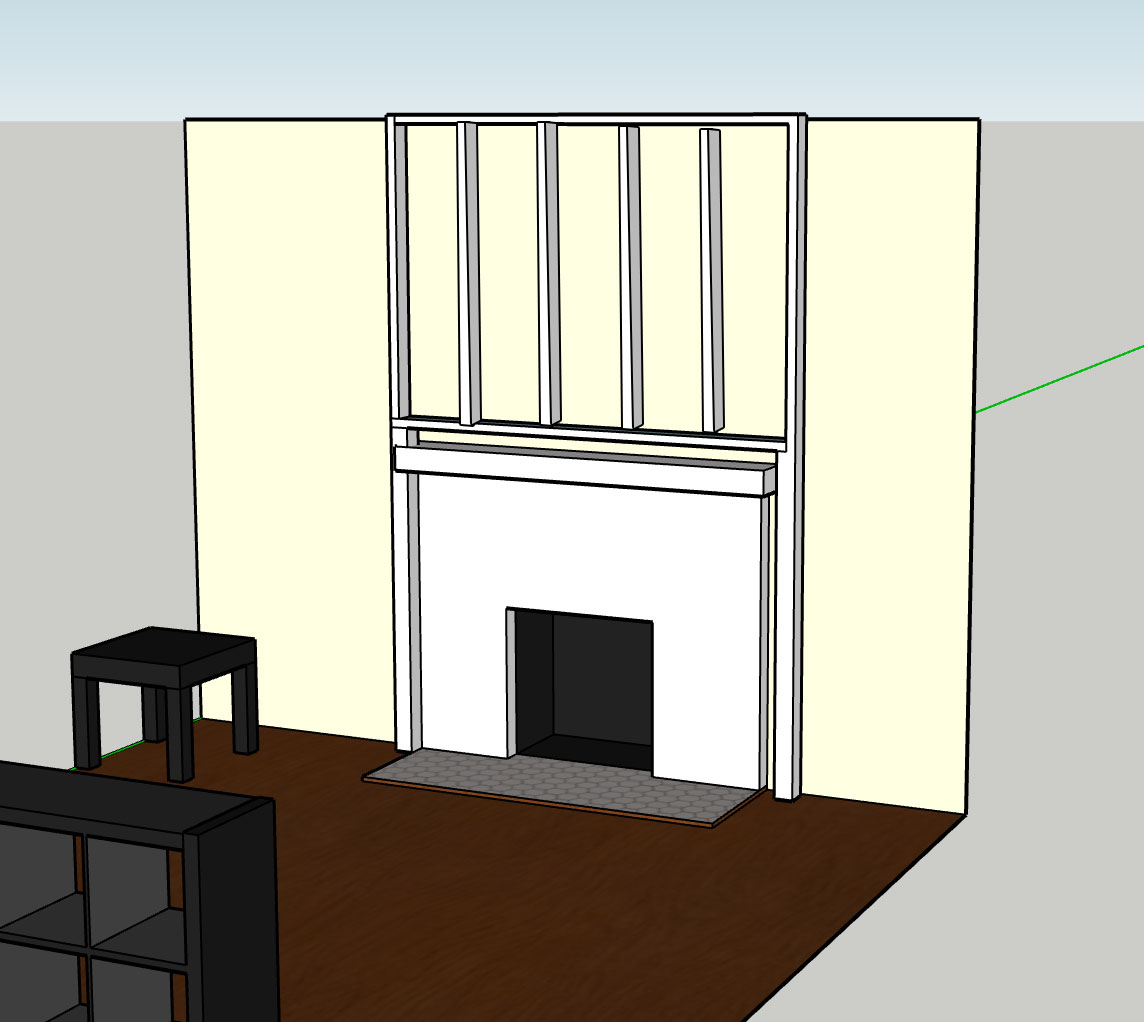 Here are my concerns/questions I'm hoping you can help me out with:

Thank you in advance for any help you can offer!

Without seeing what's underneath, I think I'd build the box and attach it to the wood studs on the sides of the fireplace chimney. You could do the actual attachment with short 2x4s perpendicular to the existing studs rather than trying to bolt the long sides of the studs together. It kind of depends on how much space you have in there behind the drywall and how far you want the "bump-out" box to stick out, etc.

My concern is that the 100-year old fireplace isn't going to be particularly happy about supporting the weight of the TV. Not so much the "dead weight" of the TV, but the additional stresses of moving the TV around will probably crumble and fracture the bricks and mortar over time.

It is up to you of course, but good solid masonry is great for fixings. I'd cut out a square of the existing drywall a bit larger than the base of the bracket and then replace it with a new piece of drywall (or tile cement backer board for even more strength) fully bedded in adhesive. I.e. instead of a small air gap behind the drywall go for full adhesive (like you would behind a ceramic wall tile for example). Fill the small seam between the new and old and allow a good amount of time to dry.

I'd also note down where the brick joints are when the drywall has been removed (so as to avoid them when drilling your fixing points.

The only caveat is that this plan fails if you open up the drywall and find poor rubble/ soft mortared/ old brickwork which is not very solid...

Update: Okay, if the bricks are a bit poor, you could still cut out a square of drywall and follow that with raking out the soft areas (joints mostly I'd assume) until the mortar feels solid (i.e. just scrape, don't take a hammer to it). Then mix up some render and plaster the area. Depending on the depth you'll need to do this in several layers over several days. If the mortar in the wall is lime based, I'd go with the same for the render (1 lime putty to 2.5 graded sand). Apply a couple of thin 'skimming' coats (fine sand and putty in equal measures) to the last 3-4mm 1/8th" or so to finish.

Not the answer you're looking for? Browse other questions tagged framing fireplace mounting tv or ask your own question.

15
How should I run wiring for my above-fireplace mounted TV?
2
How can I build a mantel around my fireplace?
1
4 King studs or 4 Jack studs
1
How do I mount a 70" TV to wall when the studs are in the wrong place?
2
How can I mount a TV with widely-spaced studs and weak wallboard?
0
How to nail LVL beam to King Stud
1
Sideways king studs!