I'm installing 6 halo daisy chain to an old light switch. The house was built around 1947. The current power is starting from the switch to the 1st light housing and the wiring is connected from 1st to 2nd housing and 2nd housing to 3rd housing, 3-4, 4-5, 5-6. Do I need to close the circuit back from the end of my daisy connection. Do I make my un hot black wire a neutral wire? Not sure what to do.

One very basic thing to wrap your head around is that the loads in power circuits are all in parallel; circuits are generally completed through loads such as say a light bulb or a cord and plug device like a toaster or a TV or a computer power supply. On 120V household branch circuits the power goes out on a hot, through a load, and returns on a neutral. All the lights on your daisy chain are in parallel, not in series.

If your switch box has just two wires, it's not a hot and a neutral; if you closed a switch with hot on one terminal and neutral on the other, it would make a dead short and the circuit breaker would trip immediately (hopefully!). A regular switch has constant hot on one side of the switch, and a switched hot on the other. If there's just two wires in the switch box, its a switch loop. 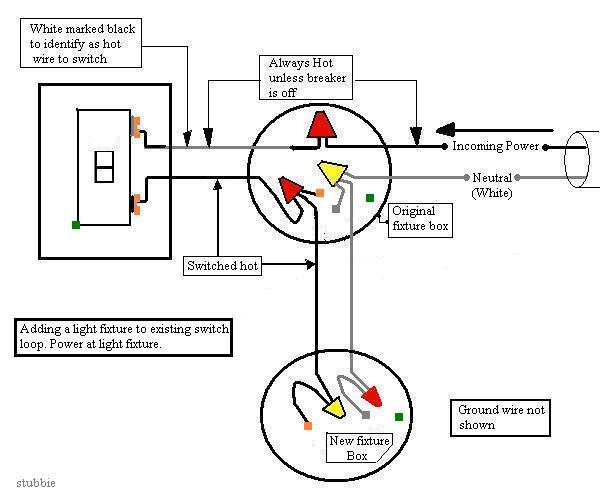 Given the age of your house don't make any assumptions about the wiring color code. This is good advice even with modern wiring, you never know what the last person may have done, or done wrong. But older wiring systems simply didn't color code the way modern systems do.

If you have to identify a neutral, it can be tricky. In modern house wiring, switching the neutral is a no-no; in the old days it was standard practice. They used to use some complicated circuits for switch wiring.

"Closing the circuit" is a myth. You never connect a hot wire to a neutral wire. All the value of electricity is in the voltage difference between those wires, shorting them would destroy that value. (And cause a huge surge and trip your breaker).

Proper color coding has the switch getting two wires: both are hot, so both are a "hot" color like black. The switch either connects the two wires, or does not. Having a switch bryween hot and neutral would violate the above rule.

In fact the lamps do "close the circuit" in the sense that they cause the circuit to become a complete loop. The switch opens the circuit, otherwise the light would burn 24x7.

The loop is power company's poletop transformer "hot" - your service drop, panel, and wiring (hot wire) - switch - wiring (switched hot wire) - lamp - back through the wiring (neutral wire) - back to the transformer.

Not the answer you're looking for? Browse other questions tagged recessed-lighting or ask your own question.

6
How to chain two recessed lights together?
1
What did I do wrong when wiring a new light fixture?
1
Replace Track Lighting To Recessed Lights Utilizing 3-Way Switch
0
Switching out an LED recessed light with no neutrals to a pendant
4
How to organize multiple electrical wires going into an ultra thin recessed light?
1
Using Recessed Lighting with a 6 pin connector instead of a 4 pin?
0
Dim only certain lightbulbs on a circuit?
3
Cut cable tripped breaker and left circuit dead after reset