Should a brand new AAV be able to leak water?

I know that ideally, an AAV (Air admittance valve) would not leak air or water out. But, should it be able to leak water under certain circumstances (such as running the garbage disposal) while still being considered "working"?

Consider a house has just a kitchen sink and dishwasher connected to a stack. Everything else was on a different stack. The kitchen stack was vented to the roof, however it was determined that there was a leak in the pipe to the roof. A plumber disconnected the vent, and placed an AAV under the sink.

The issue here is that if the sink is full of water, and the garbage disposal runs for more than 5 seconds, a decent amount of water leaks out of the AAV. 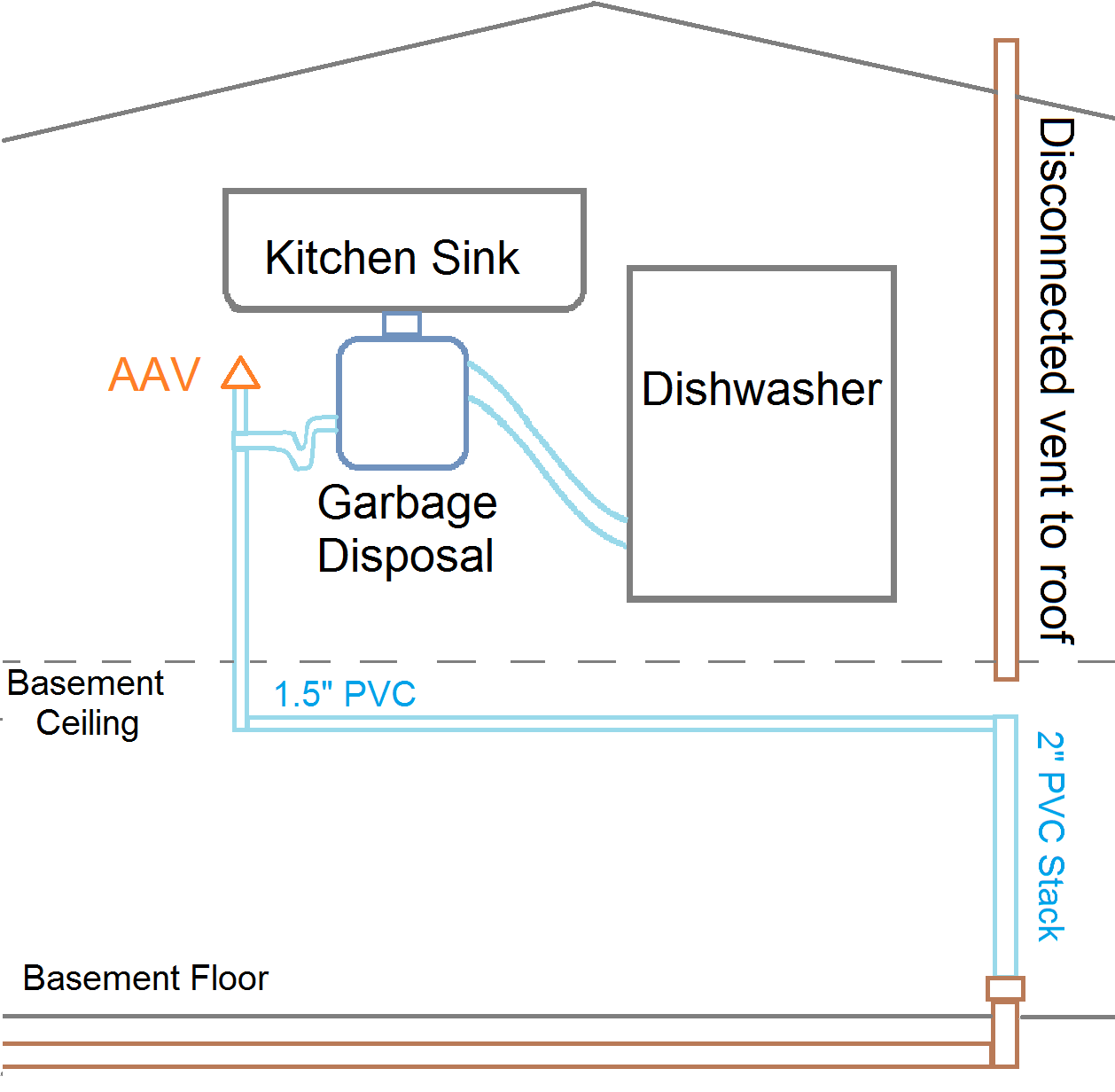 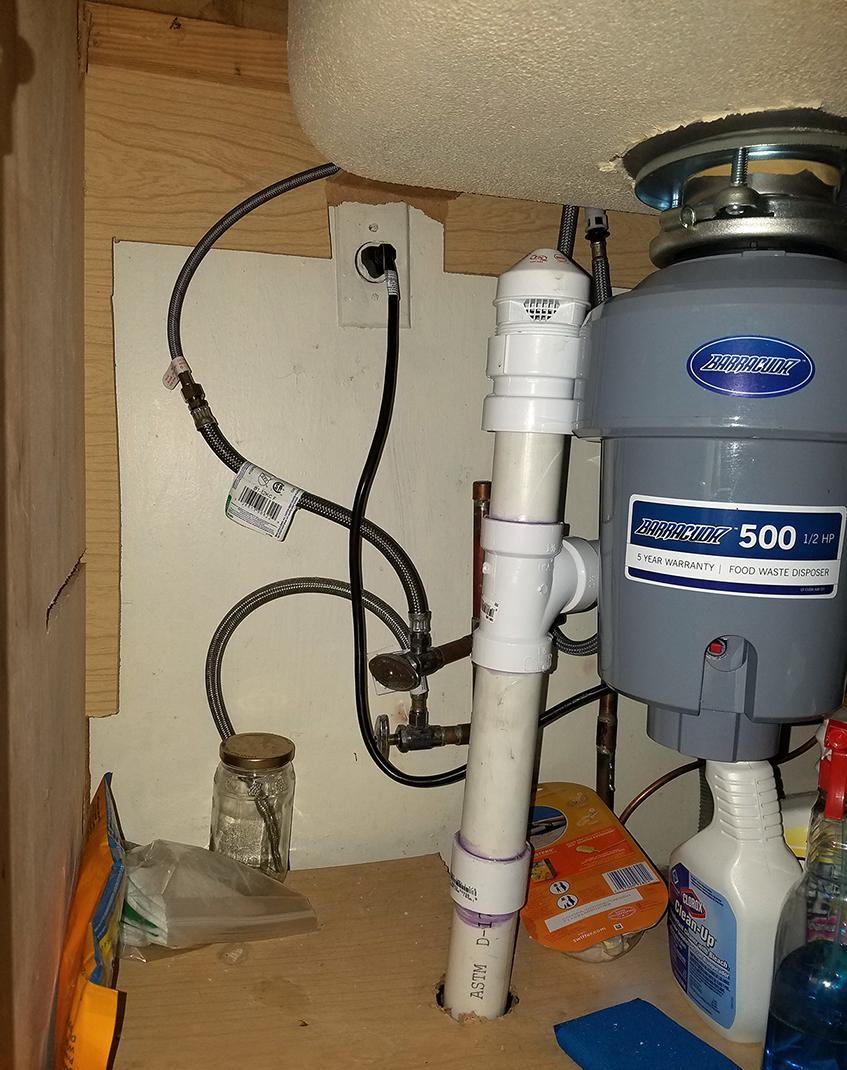 I am reading that AAV's are supposed to be a "one way valve". See diagram below. Air can come in, but the seal should close and not let pressure out...yet water is getting out.

The plumber who installed the AAV insists that the drain under the basement floor must be to blame, and should be "snaked"/cleaned out. Perhaps it is clogged under the basement, but I'm still wondering if an AAV should leak. I'm thinking that it may help to raise the AAV as much as possible. It's obviously below the flood level of the sink. Maybe it could be routed around the sink, just under the counter top, as seen in the following crude photoshop: 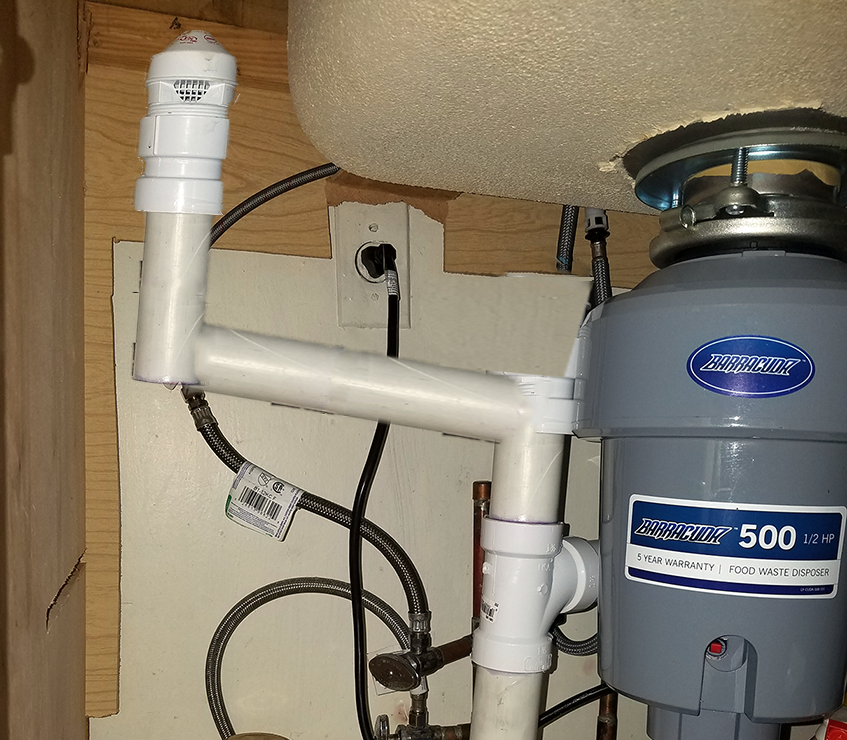 Is the plumber free to blame the basement drain, or is this AAV dysfunctional?

I don't know much about AAVs (or venting in general). But I do know that disposals push a LOT of water (and everything else!) very hard & very fast. If there is a clog in the line then stuff will come out elsewhere - e.g., in my case I have had output from a 2nd sink. So with a low-position AAV, I would not be at all surprised to see the disposal + clogged line overwhelm the AAV and end up with a mess.

Based on a little searching and my own experience (with disposals & dishwashers, but not with AAVs) is that:

According to the manufacturer of the AAV: "It should not leak, even with a garbage disposal running."

I also asked "What if the drain is clogged?". They kind of hemmed and hawed and said "Hmm, it shouldn't really matter."

I will increase the height of the AAV to mitigate leaking, as well as cleaning out the drain.

Not the answer you're looking for? Browse other questions tagged plumbing repair leak sink garbage-disposal or ask your own question.

6
How do I keep water from getting in and out of a dishwasher drain air gap?
2
Draining problems in dishwasher. Is this drain setup ok?

5
Do I need a separate vent stack for my kitchen sink?
3
How can I stop veggie garbage from coming out of my basement storm drain?
1
Should I cap off my clogged kitchen pipe at the wall or after the p-trap?
0
How can I repair a loose T joint connecting pipes under my kitchen sink?
2
Backed up kitchen sink drain that gets worse when I run garbage disposal
1
Will separate dishwasher drain cause sewer gases and wet dog smell?
1
Do I need plumber putty or would the already existing rubber gasket seal this sink leak if installed properly?
11
Garbage Disposal - Water Shoots Up Non-Disposal Side