Exposing a 220v socket in my condo

I live in the US and own a few appliances (mostly audio) that are European, designed for 220V and don't have a built-in converter to deal with 110V. I'd like to find a way to use these in my condo, for which all regular sockets are on 110V.

My understanding is that heavy appliances like heaters (and ovens, etc.) are wired on 220V and that my condo already has 220V. I have two rough plans.

Question 1: does any of the plans make sense, and if so, which would be easier? (I may be missing assumptions on US wiring, quality of current, etc.)

Question 2: my panel says "circuit directory: 120V/208V". I'm surprised by the latter (208V instead of 220V). Can I still run audio appliances off of that? This seems on the low end of the tolerance spectrum.

It goes without saying that I would contract a professional electrician to do that; but before, I'd like to know if any of this makes sense. Thanks!

Power service to your building includes a 3-phase, 208-volt, wye (or star) distribution system. That provides 208 volts between any two of three phase terminals and 120 volts between any phase terminal and the neutral terminal. Any one condo in the building would be served by two phase conductors and a neutral conductor plus a protective earth (ground) conductor that is connected to neutral at the service entrance. This system is used in some commercial and multi-unit buildings in the US, but it is somewhat uncommon.

If you have loads that rated to operate on 208 V, 60 Hz, it makes sense to install 208-volt receptacles for those loads if it is not too expensive. The equipment should be marked with a voltage range and frequency. If is says something like 200-240V, 50/60 Hz or 47-63 Hz, the equipment is ok for 208V, 60Hz. You can probably not use any existing wiring, because it is likely protected by larger circuit breakers than would be permissible for lower current receptacles and loads. In addition, the existing circuits are intended to serve certain loads. An electrician can tell you what is involved and the cost of the wiring. In addition to that cost, there may be repair of plaster and painting required for any openings made by the electrician. An electrician would not usually do that repair.

Read you condo association documents, wiring may be owned in common, not owned by the unit owner. Your individual ownership may be only the paint on the walls inward. In addition, any wiring must conform to the local electrical code and all receptacles are more than likely required to conform to Underwriters Laboratory (UL) standards. Code may not allow a schuko receptacle.

When I moved from Michigan to Belgium to live for two years on a work assignment, I brought along several transformers in order to use our 110v computers, printer, appliances, even the vacuum cleaner.

Be aware that if the equipment has a clock in it because it will be off because of the frequency difference, if that matters to you.

You likely don't have 220V, but 240V available. Condos (and houses) typically do not have three phases available, unless specifically supplied for a workshop etc. What you have is a single phase from the three in the neighborhood feeding a transformer, either on a pole or a kerbside box, that produces 240V center tapped to ground, which then can be split up into two sets of circuits that have 120V relative to the neutral - and ground (which are commoned, usually inside the breaker box). The breaker box then has two live busbars, a neutral bar , and a ground bar, with the commoning jumper between the latter two. 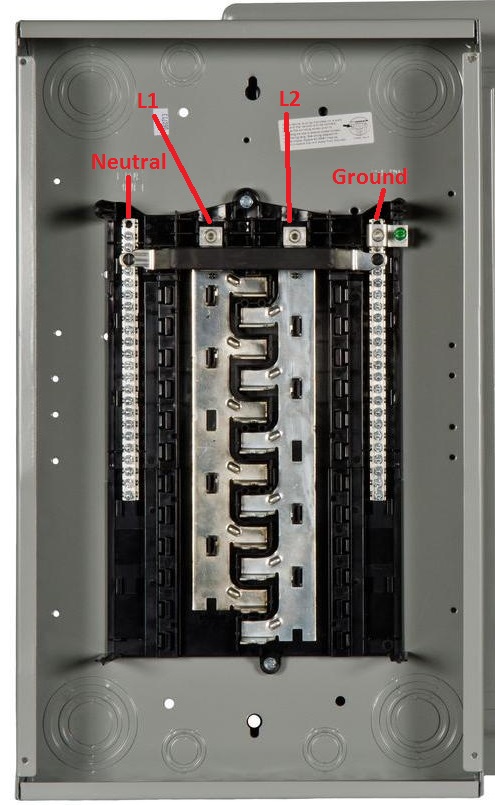 The live bars are interleaved down the center, so that positioning on a double breaker anywhere connects to both of them, giving the 240V L-L supply to the heavy loads - water heater, HVAC and stove. Single breakers alternate between the two to divie the load up between the two phases.

You can add a double breaker if you still have space, and connect the same wires that feed a specific circuit to convert it to a 240V supply, and replace the sockets with the appropriate NEMA 6 socket, and mark the white wire as live by sleeving it black, so an electrician could fairly quickly do this if you're willing to change one circuit over, otherwise it'd mean running a new wire.

Not the answer you're looking for? Browse other questions tagged wiring 240v socket or ask your own question.

3
Wire Gauge/Type for 100amp detached Shop?
7
Rewiring house and replacing breaker panel. Wiring layout and breaker selections
0
Change my 220v 50 amp breaker to 70 amp on existing wiring to pool panel
3
Can I run THHN for separate washer and dryer circuits through the same conduit?
2
How to add tiny 0.5A 120V load to very remote split phase 240v 3 wire well house
3
Running 240v power to detached garage for electric vehicle
14
How do I make this wiring inside cabinet safer?
2
Can I use #10 wire for a 30A, 240V pump circuit?
0
Can I connect the ground pin of the wall socket to neutral?
0
Sharing a receptacle box 220v with a 3 wire and 4 wire appliance