I just got a new disposal. It came with 2 foot 3 prong power cord. The old disposal was wired to an outlet I can't get to. The wires for the old disposal were spliced right under it. I figured I could just splice the new cord to the old one, but the old wires have black, white, and a ground whereas the new disposal has 1 green and no color for the other 2. I assume on the new cord, green is ground, but the other 2 don't have any colored insulation. How do I know which wires from the disposal go to which wires that are connected to the switch? The 2 main prongs are the same size and shape, does that mean hot/neutral are interchangable? Herebare the pictures: 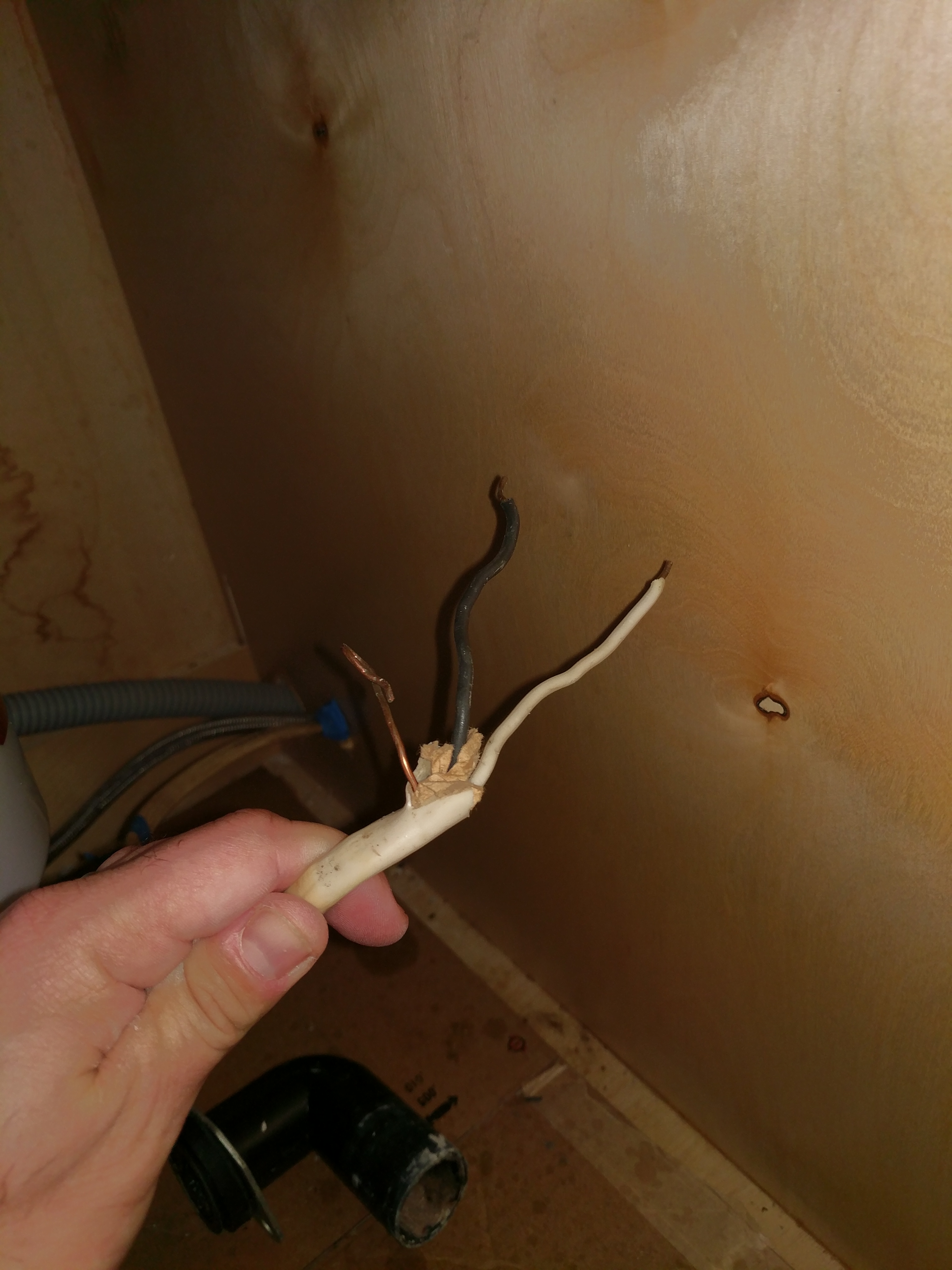 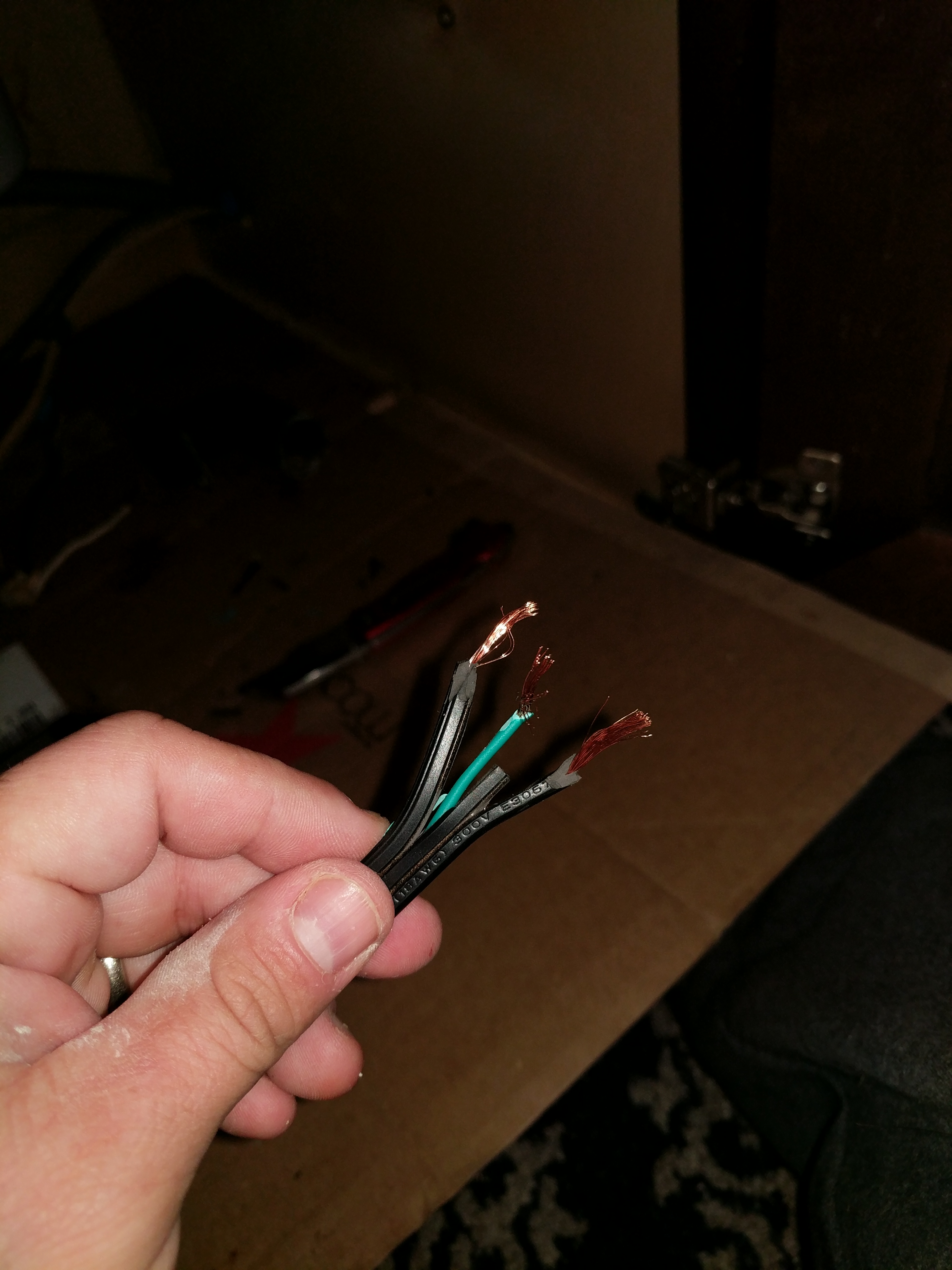 The neutral wire is usually the one with the writing or ribs. This is common and required for ul listing. Connect the wire with writing to your white the other to the black and ground to ground and you will have connected the way it was to the old disposal.

Grounded outlets are polarized, with the neutral slot being wider than the hot; this is to maintain polarization for many two-prong plugs which have their neutral blades wider than their hot. For example, a cord for a non-grounded lamp with an Edison base bulb will be polarized so that the body of the lightbulb socket will be neutral and the central pin will be hot.

Since the chopped-off plug has a ground pin, its hot and neutral blades may not be different size, but you can figure out which is which by referring to the ground pin. Going clockwise around the outlet, the pins will be Ground, Neutral, then Hot; obviously the plug will be reversed.

The two outside (non-ground) wires of the cable are marked to show which is which; generally the neutral wire will have ridges on it (as the top wire in your lower picture does), but in any case you'll be able to match the wires from the (now severed) plug with the wires from the disposal.

Maybe the disposal won't care if you get hot and neutral swapped, or maybe it will, but you'll never know unless it causes some problem, and the problem could be nasty (e.g. the sink becoming live, although the ground should prevent that). So, you should do your best to get the polarity right.

Not the answer you're looking for? Browse other questions tagged electrical garbage-disposal or ask your own question.

4
How can I identify the conductors in an appliance cord with only the green wire colored?
0
Wiring power cord Adapter to connect a Round 3-prong female generator plug to a round 4-prong Gen Trans Switch
0
3 prong to 4 prong dryer cord change
1
Installing new dishwasher but using existing power cord
3
Both prongs of an outlet carries live electricity of a switched plug
0
New light fixture to old wiring
4
Replacing old doorbell transformer - wiring
3
How should the ground wires be connected when changing my dryer's power cord from 3 prong to 4?
-1
How can I tell hot from neutral on the power cord of an evaporative cooler?
4
Garbage disposal has strange switch wiring