Second question: At each box would you just pigtail the power in / power out and power to the switch?

Third question: Is 14 the correct gauge wire since the whole load is less than 3 amps? 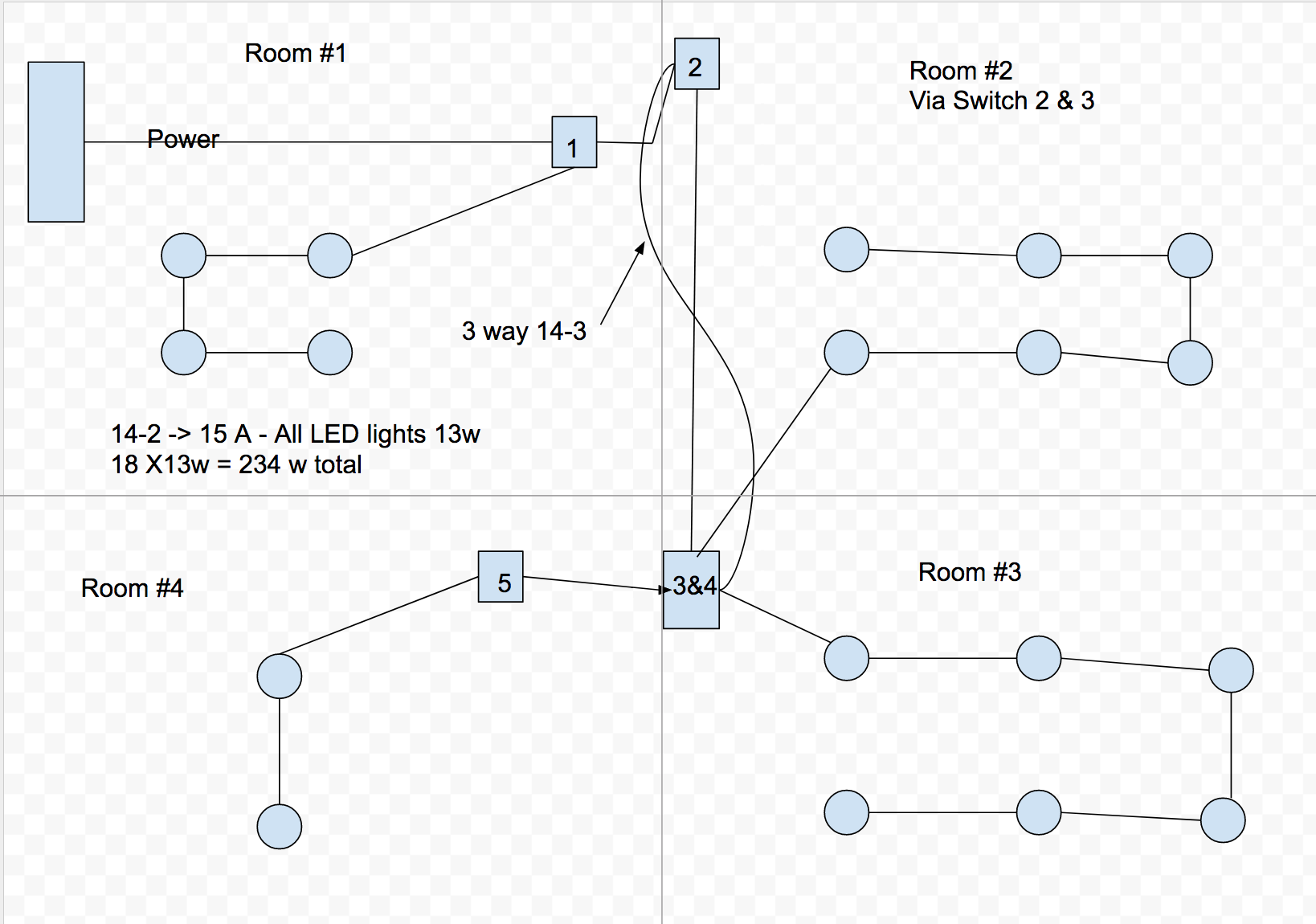 For the /3 circuit, it is improper wiring to allow currents to be unequal in any cable or conduit. That means the 3-way must be handled carefully.

As drawn, you will have two neutrals between rooms 2 and 3. They must not be paralleled, so don't tie them together in room 3! What's more, because of the equal-currents rule, the power traveling to the lamp via either traveler, must return in the neutral in that same cable.

With two groups of neutrals in the same box which must be kept separate, the next guy is likely to make a blunder. His viewpoint will be "the last guy was an idiot, why didn't he join these neutrals, because you join all neutrals right?" I see 3 ways (heh) to head off that problem.

I am a huge fan of marking wires with tape. (And cables with tape too when needed for confusion). I prefer black for always-hot, red for switched-hot, and any otherwise-unused color (typically yellow, get it, brass screws, yellow) for both travelers. (neutral must be the white wire). Because of the way travelers work, there is no need to distinguish them from each other.

So way #1 is proceed as you are and mark the wires. Mark the 3-way neutral (in the /3 and onward to the lamp) with gray tape. That doesn't come in the $4 five-packs of colored electrical tape (red blue yellow green white), so you can use green.*

Way #2 is to flip the 3-way, so the cable to "room 2" lamps comes from box 2 rather than box 3/4. In that case the wire functions in the /3 cable would be traveler, traveler, switched-hot. Those three wires would go straight to the 3-way and not splice at all, making the separation very clear.

Way #3 is to use /4 cable. Being all in one cable satisfies the "currents must be equal" rule no matter what.

* A technicality. Green is ground... white/gray is neutral... all others are hot. White/gray can be re-marked to a hot, but all other category changes are illegal, and thus, invalid. So put green tape on a white wire, it's still neutral. Doesn't work for any other color.

First of all, as I edited in the question, wire normally refers to a single conductor. Multiple wires inside a outer covering is referred to as a cable. 14/2 and 14/3 are common cables, each containing multiple insulated wires (2 or 3) plus a bare ground wire.

That is the typical way to do it, though it uses a little more wire than the minimum. You could use a single 14/4 cable between box 2 and box 3. This would have hot (black), neutral (white), 2 travelers (other colors). The advantage is you save one wire because the neutral can be shared since this is all part of one circuit. However, if you already have (or will be getting) 14/3 for other 3-way switches then running 14/2 + 14/3 is probably cheaper than getting 14/4 just for this one installation. As noted by Harper, if you use separate /2 and /3 then you must keep the neutrals matched to the hots/travelers and not connect them together in room #3 (i.e., switches #3 and #4).

Second question: At each box would you just pigtail the power in / power out and power to the switch?

Third question: Is 14 the correct gauge wire since the whole load is less than 3 amps?

Correct. Just make sure that the circuit breaker is also 15A to match.

Not the answer you're looking for? Browse other questions tagged electrical wiring multiway-switch or ask your own question.

2
Can I wire a 3 way switch to a light but also have an always-hot receptacle?
0
Replacing existing and working 3way with smart switch
2
Space requirements for first subpanel and wiring preference
4
Multi gang switch boxes - Is it okay to keep the same branch neutrals separated for the different lighting/switching circuits?
1
Simple switch wiring
2
Continuous power between multi-gang boxes with 3 way switches
2
Replacing two 3-way dimmer switches with two non-dimmer 3-way switches
0
converting two lights from two switches to two lights from one switch
2
Can I steal neutral from fixture for 3-way switch device with no neutral?
0
Replacing 3-way switches with C by GE smart switches