Dishwasher is not draining. Error code "d02" on display on start of cycle. No sound from the drain pump. Has lived and operated near Paris for some years, with hard water. "pompe de vidange" - French for drain pump.

Model: De Dietrich DVH938XE1/D or E (cannot remember, but they are very similar)

This model seems to be mostly sold in France, and all manuals I find are in French. From what I can Google Translate, "d02" simply means that the machine cannot drain, with no further explanation to what triggers this message. They suggest checking drain hose and debris, but that is it.

I have found a replacement drain pump assembly online. From UK From France

However, before I actually acquire a replacement, I am trying to understand what is wrong with the pump, if any problem at all.

I have watched a few videos online, but nothing conclusive: Removal of debris in drain pump after d02 error

Walkthrough of standard problems with drain

I am measuring 224 ohms between the two contact points, marked L and N on the back. The pump looks visually ok, clean. The impeller moves freely, but it lags/tugs every 180 degrees as expected, I attribute this to permanent magnets in the rotor.

I do not expect it to have a starting capacitor, but I am not sure, as the resistance is not read immediately, but it takes 1-2 seconds to get the correct reading. I attribute this to the way the multimeter works, but that is an assumption.

After plugging it straight into the wall, it seems to stand and hum, until I move it in either direction with my fingers. Then, it kicks in and start running as expected. Sometimes, I am able to stop it, and turn it back on and it will continue by itself, other times, I have to encourage it a bit before it starts running. I attribute this to a "dead zone", but it seems stupid to make a drain pump which may end up in a "dead zone" unless you have circuitry to make it move on the PCB?

This behaviour seems to me to be awkward but expected; however I have no idea how this is able to start with no external forces applied to it inside the machine. This may also be an indicator of a damaged motor, though.

The windings are on the stator, with two massive metal pieces bending around the rotor, acting as electromagnets. I have not yet opened up the cover on the motor, as it is hold in place with plastic taps that easily break (see the last video).

So, I was moving my attention to the driving voltage from the leads from the PCB. I measured the voltage there, and saw before the cycle started, 10 volt AC. As soon as it seemed to activate the drain pump, the voltage dropped to close to 0 volt AC, while the error code "d02" flashed.

I checked the PCB visually, a standard mass-manufactured dishwasher controller, and it looked very clean and in good shape. I did not test the relay, but I wonder if the relay that drives the drain pump is the problem. However, I just do not know how the PCB senses that the drain pump is not working. It may very well be that if the load it tries to drive is wrong, it will end up saying "d02" and nothing more, but it just sounds too advanced to be true.

There may also be a bunch of other sensors that end up triggering "d02", even though the French manual only talked about the drain not working.

Besides that, the hoses are not clogged, there is no debris in the pump. It does not sound like there is any liquid inside the stator housing, either. The bearings seems ok, as I cannot hear or feel any irregularities when I move the impeller.

There are a few other sensors I imagine could do something, but I have not yet identified all of them. There is one sensor on the bottom pan to detect water leakage. There is another floating unit near the middle of the machine, that seems to be affecting a hall effect sensor, this probably tells the machine when it is full and when it is empty.

How does the drain pump motor actually work when you apply power to it? Does it just start by itself, or is it normal for the relay to switch the poles to the motor if it does not seem to drain, in order to get it moving? Is it the force of the water that encourages it to move?

How does a washing machine normally detect that it is not draining? (I cannot see any sensors on the outlet, and the warning comes on immediately when the cycle is supposed to start)

Are there more measuring tests I could and should do on the motor? No, continuity does not beep on it - but the resistance seems to me, ok. When rotating the impeller and measuring AC voltage, I measure maybe up to 10 volts AC, but I move the impeller by hand, and not very fast. I assume the windings being ok since I do measure a voltage over the two leads. I may be wrong to assume that.

The machine is at a friend's place, whom I, maybe not in my brightest of moments, suggested fixing the machine instead of leaving it as an expensive cutlery storage for what is +1 year. No, I really do not like throwing things away unless absolutely necessary, but I realise what we pay with is time. So anyway, I will go back and have a look at it again, but in the meantime I need to decide if we should order a new pump or not. Any tips are well received.

The dishwasher is up and running its first cycle in a year.

I tested the pumps using a piece of wire with a button on it, normally found in your DIY-shop under "lamps and stuff".

I opened up the old pump, breaking parts of the plastic, and saw the capacitor. I do not have a multimeter that can measure it properly, but I believe that is all that is wrong with this old pump, a defective capacitor.

The motor lid is hard to get off without breaking the plastic brackets, I guess it was not made for fixing. Planned obsolescence maybe. A new motor/pump is around 70 EUR as noted.

Without the capacitor doing its job, the motor does not get its last phase, and hence does not really move, just "humm" 50 Hz style.

As far as I understand, it is a very simple squirrel cage motor with a starting/running capacitor, I can only see a single capacitor so I guess it does both jobs.

Thus, I assume the PCB controller on the dishwasher has some fancy way of seeing if the pump motor is actually doing what it is supposed to do; maybe using the capacitor?

I assume the "Cap lead" is used to test the capacitor and the motor; and is later covered up by the plastic cover.

I hope this was helpful for someone. I think all in all, I spent 5-6 hours, figuring out how to dismantle it. After you have done it once, I bet you could do the same job in about an hour or two.

After you have put it all together, do keep your eye on the bottom water pane, to see if anything is leaking. I am amazed at how cheaply these can be put together to do your dishes. 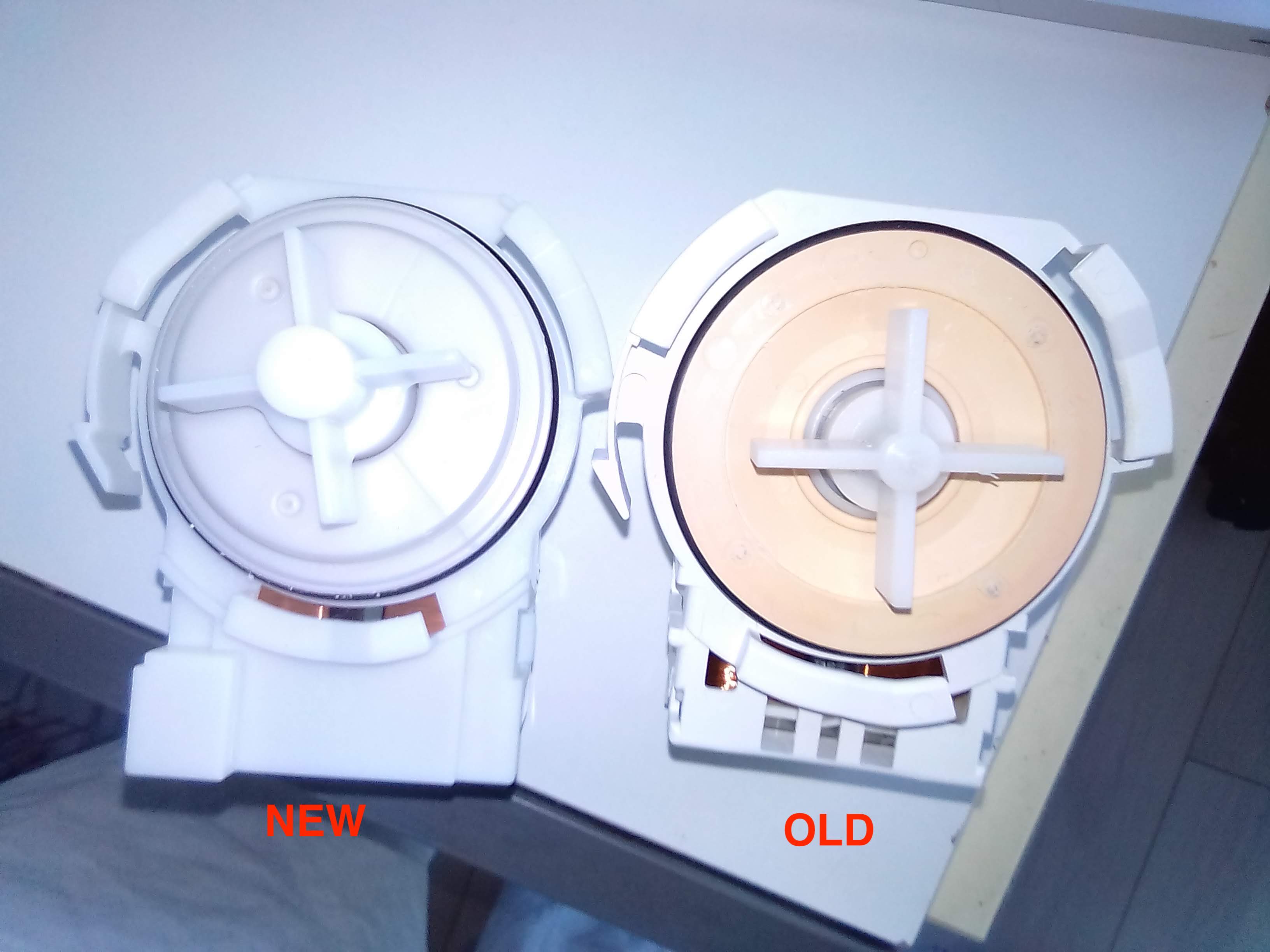 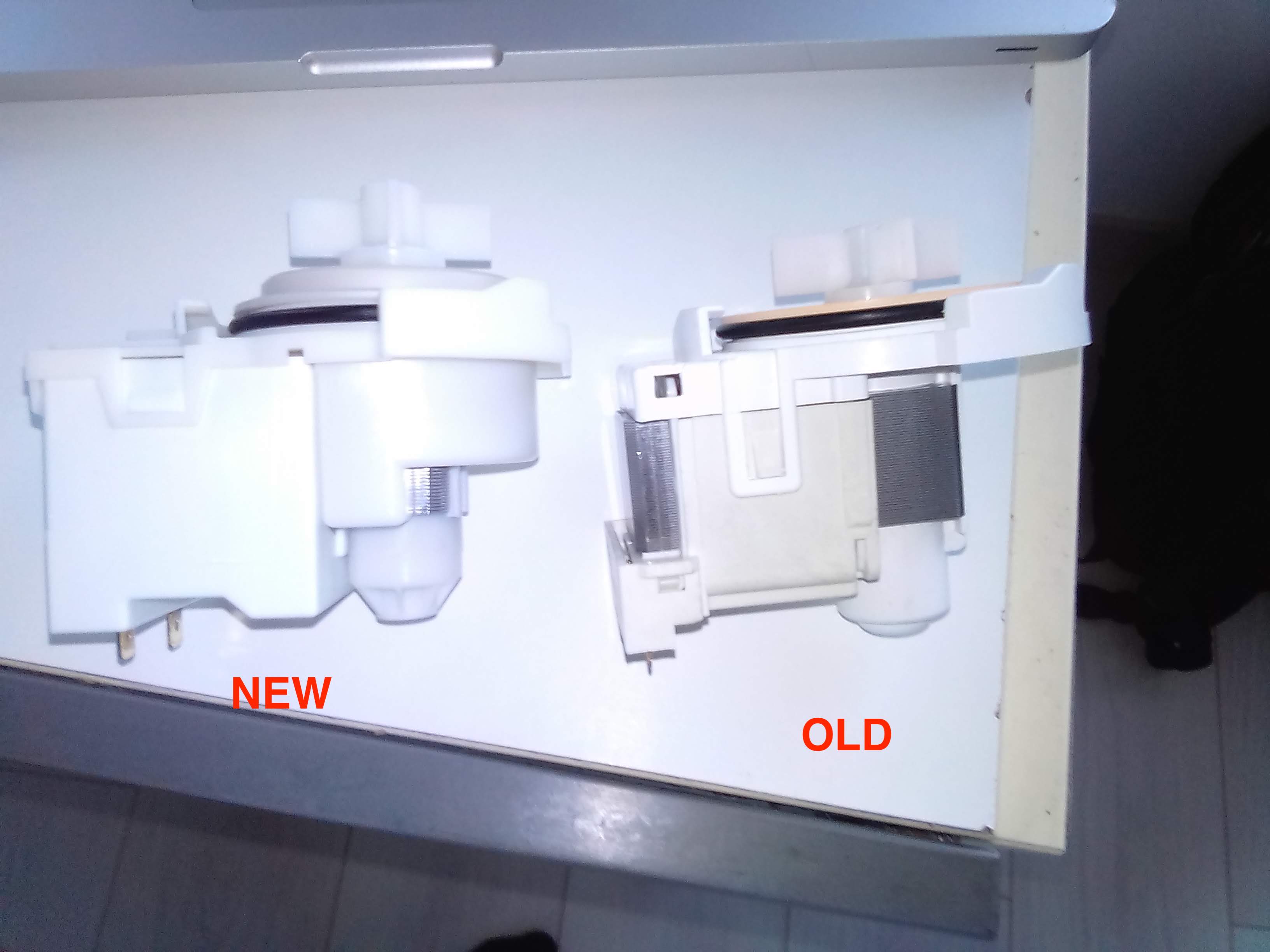 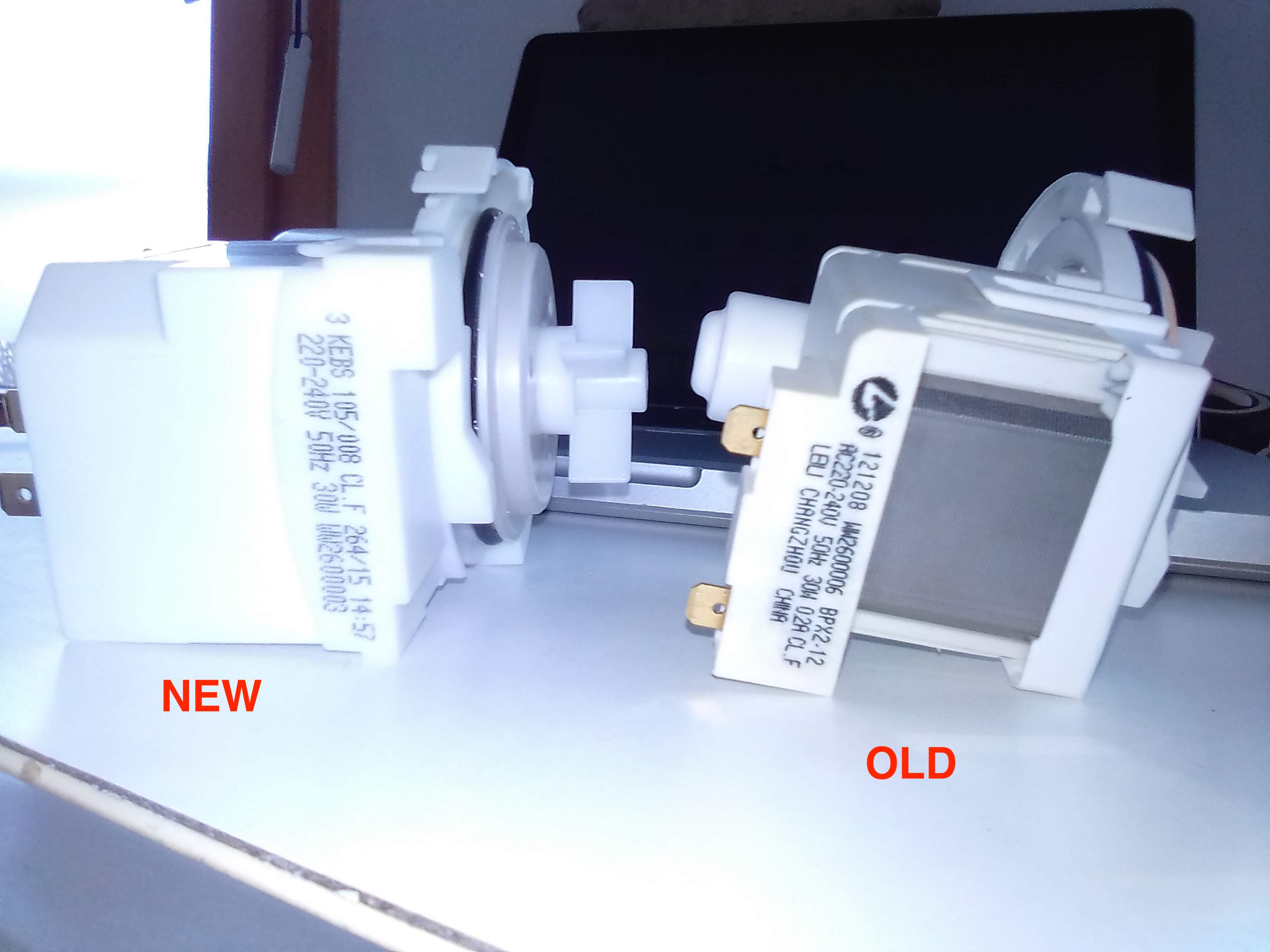 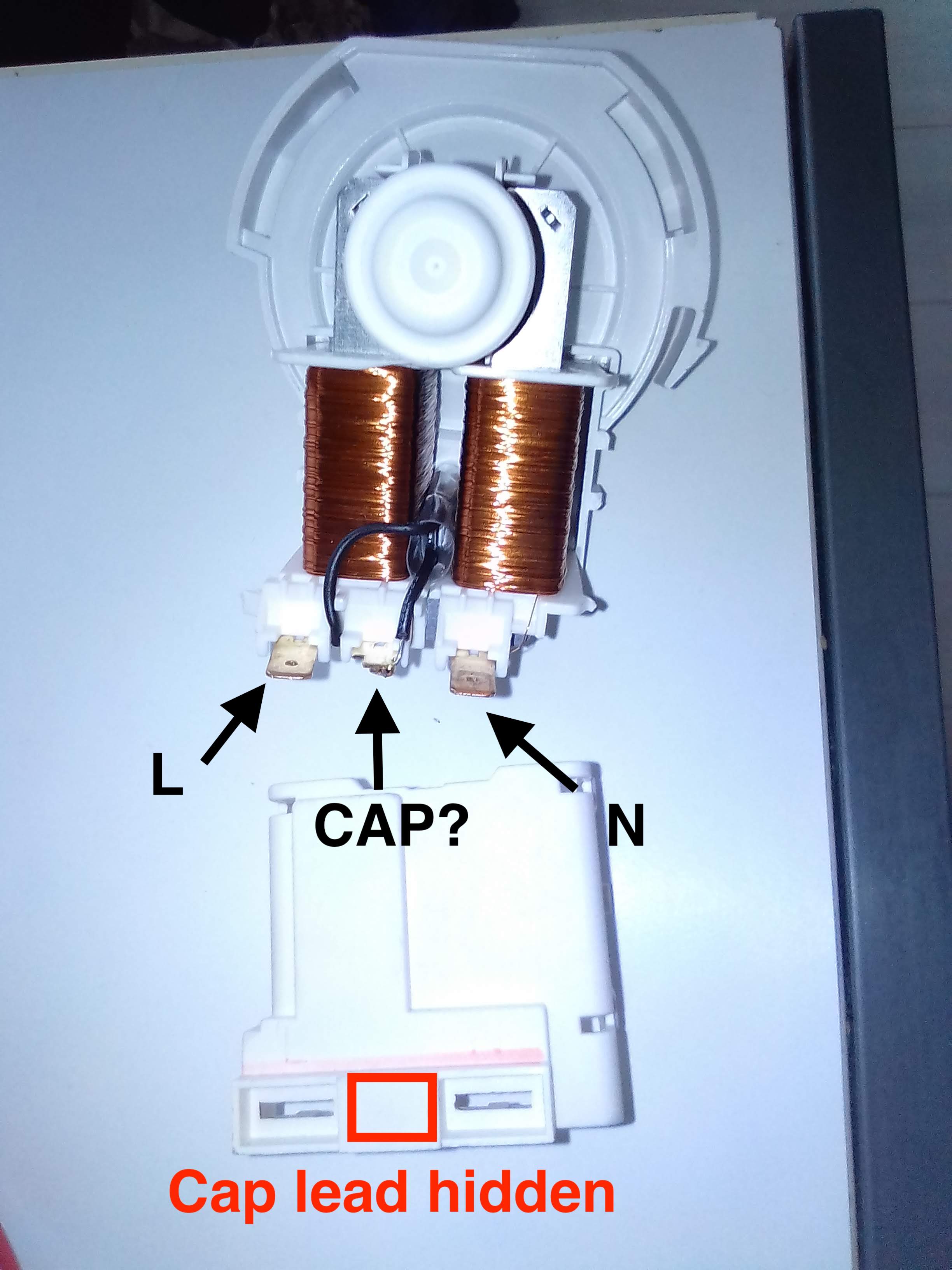 Not the answer you're looking for? Browse other questions tagged drain dishwasher pump electric-motor or ask your own question.

4
How can I repair my Bosch dishwasher that won't drain?
1
How does a boiler pump circulate water?
3
Can a broken circulation impeller cause a dishwasher not to drain?
3
Dishwasher Drain Pump: How to Test?
0
How do I Test a Dishwasher Pump Motor
2
Do I need to replace motor stator if windings are broken?
0
KDW60X16 Dishwasher - Not Pumping Water (Wash Pump)
0
Dishwasher Not draining at the end of the cycle
1
Dishwasher shows a drain problem - diagnosis
1
Dishwasher drains with drain line detached, but not into the drain line itself