I have installed dimmers in a single box and a gang box with 2 switches but never a box with 3 switches. And there's some confusion, so hopefully someone can help. I am installing a new smart dimmer switch as shown in my photo. I am replacing the middle switch. The new dimmer requires neutral, and those are all tied together in the back of the box.

Just a note: The rightmost switch is a 3-way and is independent of this install and is not connected in any way to the lights which will be connected to the dimmer.

Any help would be appreciated. I'd rather ask before trying this. Clearly, I am not an electrician! If I were, then you definitely wouldn't want to hire me!! :).

NOTE: Had an error in first photo. The one showing is now correct. 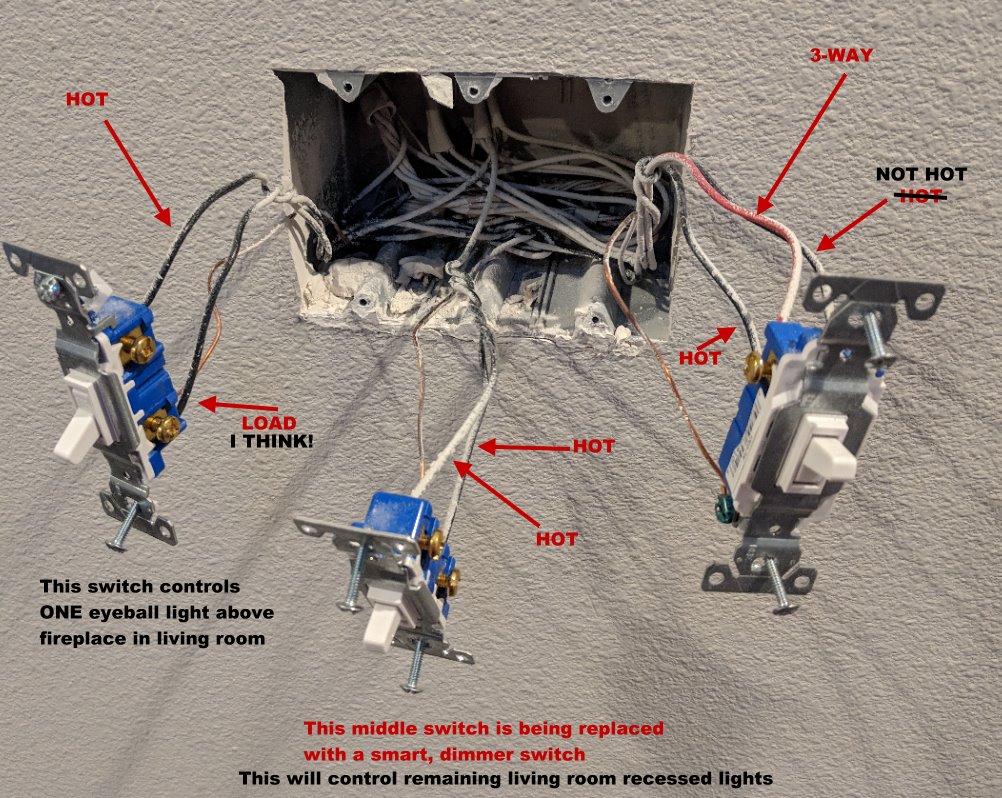 I think the kind of tester you are using is not accurate enough.

Here's a good way to find out which wire is HOT and which is LOAD on the middle switch:

These tests depend on your switches being wired correctly in the first place. If both wires from the center switch behave exactly alike, or if your testing trips the circuit breaker, your wiring may have errors that will require much more analysis.

Even more simple. Test the wires with the switch in the off position. It looks like the switch you are trying to replace is on.

First, don't disconnect anything except the 2 non-ground wires to that one switch you are working on. Lots of people disconnect too much, then get confused.

In a multi-gang box, the confusion is also salvation. Studying where the wires go will tell you which side is line (always hot) and which is load.

One of them goes to a clump of 3 or more wires, all black or a color (not white). At least one of the wires goes to another switch. That is "supply" or "always hot" or "line" (in a switch context, not a GFCI context). At least one of these comes straight out of cable going into the wall -- one of these must be the supply line back to the breaker, any others would be onward power to other switch boxes or receptacles etc. It won't matter which, for this.

The other black wire goes straight into a departing cable. That is "lamp" or "switched hot" or "load" (again in a lamp switch context not GFCI) and the cable goes to the lamp.

If you need neutral, you need to get it out of the correct neutral bundle, there may be two. While you are looking at the departing cable for the lamp, note it also has a white wire, which is neutral. Follow it back to a bundle of all white wires. If you followed a supply (or onward?) cable in the same way, it should lead to the same neutral bundle. That is the neutral bundle to use.

If you're ever wiring a setup like this, do a better job. First, don't use the backstabs, wrap the wire in J-hooks snugly around the screws and tighten them. Backstabs are notorious for having connection problems and causing circuits to fail open. Sometimes they also get arcing and burn the switch right up. Hook the wire clockwise around the screw, so tightening the screw makes it wrap more. Righty tighty and don't remove the screw all the way.

Tighten down all screws, don't leave the screws sticking out looking for ground wires to bump into.

Second, mark the wires by wrapping colored electrical tape around both ends of the wire at install time. I prefer yellow for the two travelers on a 3-way (which are on the brass screws not the black), red for the first switched-hot, blue for another switch's switched-hot, etc.

Any pair of wires with the same marked color are the two travelers in a 3-way circuit (there is no need to distinguish them from each other).

And third, wrap around all sides of the switch with electrical tape to cover up the (now run down) screws so they don't zap ground wires or servicers.