I would like to install a Smart Switch (in the UK). I am confused regarding what wires go where and the fact that this requires a neutral wire.

This is the back of the new switch: 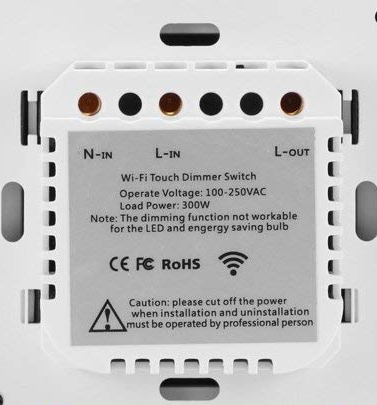 Although I know I have 3 wires in the switch socket, I cannot remember if two are coloured blue / brown. I do remember I have a yellow-green striped wire which from my research on Google is ground (not neutral).

I know two wires are currently plugged into L1 and L2 in the current switch (whatever that means) and the yellow-green stripped wire is just loose in the socket.

So, how would I go about installing this switch based on where the wires are currently plugged into and where they need to go in the new switch? If yes, I must already have a neutral wire?

I agree with Harper and Ed's answers and wanted to add a little more detail that might help you to understand the wiring and the issues with installing smart switches.

As Harper pointed out, that switch is a cheap and nasty Chinese-made switch (they can make decent switches too but that isn't one of them). If you look at the back of your old light switch you will see "10AX" marked on it. That means it is rated for 10 Amps. This is far more than it will ever need to switch but it is an important safety margin. Your light circuit is rated for 6A so if there is a fault elsewhere in the circuit (e.g. a short in a light fitting) the switch may have to carry or safely disconnect a high current without arcing and catching fire. That switch says 300W or around 1.25 A. Far less. Also badly made Chinese stuff often does not even meet half the rating printed on it. We just don't know whether that smart switch will fail and catch fire if there is a fault elsewhere. 300W is plenty for normal use but it doesn't inspire confidence compared to a 10 amp (2400W) switch. Your old switch also probably has "BS3676" moulded into it, your new switch doesn't say whether it meets UK standards at all.

A typical UK Light circuit is wired like this

Note that the blue wire in the switch location is not supplying neutral, it is a "switched live" that takes power from the switch to the light bulb.

Older homes will use a different wiring arrangement where connections are made in junction boxes in the ceiling and not in the ceiling rose instead. They still mostly use "switch loops" where there is no neutral in the switch location.

Some homes will use older wiring colours (black instead of blue, red instead of brown, plain green instead of green/yellow striped)

The fixed cable in wall and ceiling is called "twin and earth" or T&E and typically has a bare copper earth wire that you have to add a green/yellow sleeve to when installing switches, lights etc.

Most UK lighting circuits use 1mm² or 1.5mm² solid wires. The flex to the pendant lamp is typically 0.75mm² stranded wires (BS EN 60598) which can carry the 6A the lighting circuit breaker is rated for.

All connections are typically made using built-in screw-terminals that are part of the switch or rose etc. These are always recessed inside an insulating housing so that conductive parts cannot be touched.

For a switch loop, the most correct type of T&E is one with two brown-insulated wires instead of the usual brown and blue. However in most cases electricians use the normal brown and blue T&E and just put brown tape around the blue to indicate that it is not being used as neutral.

As you can see there is no neutral supply to the switch location - even if there is a blue wire present.

To install a smart switch that needs neutral, you'd have to remove the old wiring to the ceiling rose and install a 4-wire cable. This usually means chasing a channel up the wall (if masonry) or otherwise opening it up. It also probably needs access to the interior of the ceiling from above. This sort of work is time-consuming and can create a lot of dust. It needs some repair and redecorating work afterwards.

As Ed explained, you can find a smart-switch that doesn't require neutral but be aware that these may cause problems with some types of LED lamp. The exact problems are difficult to predict but might include lamps that never turn fully off, lamps that blink or other strange behaviour - more an annoyance than a safety risk. I'd look for LED bulbs whose packaging says they are dimmer-compatible and for smart-switches that are LED-compatible.

Oh no, send that cheap Cheese piece of junk back to Alibaba.

Note: The dimming feature not workable for the LED and engergy [sic] saving bulb

That is terrible English. They didn't even bother falsifying a mark from a reputable testing lab, they just faked FCC cert (most do) and CE mark (which is only a manufacturer's promise anyway, and falls short of true safety testing standards, let alone the testing itself.)

This thing is not for LED (which presumably you will want to use at some point), is unlisted and not safe or legal for sale in the UK, and due to the neutral wire isn't even a correct fit for your application. Get rid of it.

Get a workable neutral-less LED dimmer at a reputable vendor like Wickes, or one made by a reputable maker that is "ships from and sold by Amazon.com". EBay/Alibaba-AliExpress are right out, even if they claim to be reputable brands, they may be rejects or counterfeit.

0
Rewiring a UK dimmer switch with a Wifi switch
0
Is there any reason testing the neutral line on a dimmer light socket wouldn't work?