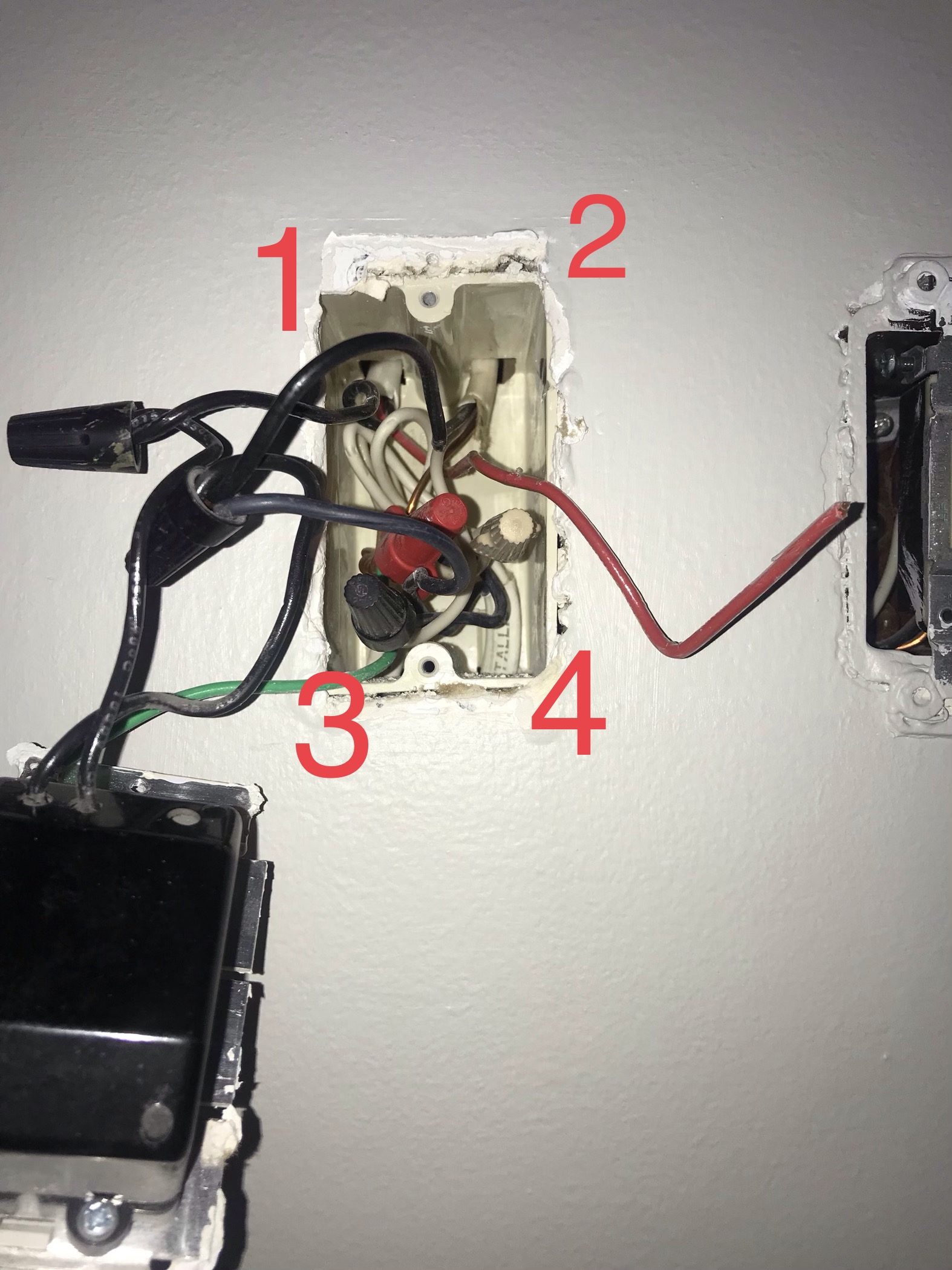 Hi. Hopefully someone can help me with this. I have a dimmer switch that controls a ceiling fan with lights. I want just a regular on/off switch. When you run the fan it makes a noise unless the dimmer is jammed all the way up. It only controls the fan however there is a regular switch right next to it that controls a outlet.

2 and 3 have black wires connected together with a black wire coming out of that and going to the switch.

The remaining white wires are connected together.

Can someone please tell me how to wire this to a regular switch? And do I need a special switch? It seems like a awful lot of wires. The dimmer just says 600w120vac60hz5a

I was just going to shove it back in and deal with the ugly tan switch but I’m not sure about that red wire. Any help would be great.

Disregard wires that are not part of your project

And leave them alone. What those other wires are doing is scientifically interesting, but attempting to learn electrical wiring by disassembling ones house is out of the question. Much easier on everyone's nerves to get a "How To" book from the library and read it through.

The red wire is a spare, to allow switching of fan and fan-light separately. You are not using it today. That is a good sign, it means the builder actually intended that ceiling box for a fan, and presumably used fan-rated boxes.

Ground wires are very important, but they have a simple M.O. - every ground connects to every other ground. That's all they ever do. They don't need thinking about, so when trying to understand a circuit, you can disregard them. Just don't forget them.

So we ignore all the things we don't care about, what's left? I see 2 wires. Black and black. Looking at a common light switch, I see 2 screws. Easy as it gets.

Those extra wires are called "pigtails". For the supply black, you need a pigtail. For the other one, as you note it is redundant, and could just go direct to the switch. (Either way is acceptable, I broadly use pigtails even when I don't have to, because it lets me attach the pigtails at a workbench instead of up a ladder).

If those pigtails are permanently attached to the dimmer, don't use them. It will wreck a perfectly good dimmer to cut them, but they may be too small a wire size - often dimmers are provided with lighter wires, and UL allows that because they are pigtailed like this, but lightening up the wire is not allowed here. However, these wires look like the same wire stock already in the box, look for screws at the dimmer: if you can remove them, just do so, and attach them to the new switch.

When attaching to the switch, two methods are generally available: shape a J-hook to wrap them around the screw (clockwise) then tighten... or push them in a backstab hole which grabs them tight. The backstabs seem much easier, but are unreliable and cause a lot of weird problems later. If you have a better quality switch, the backwire holes may be directly under the screws, those you tighten the screw to clamp the wire. Those are OK.

A little hard to figure out what you currently have, but a few points from what I can see so far:

Why doesn't the dimmer work for the fan? Because controlling motor speed is generally done using different methods from controlling lighting brightness. Under most circumstances, the preferred way to control ceiling fan speed is either with a switch on the fan (e.g., a pull string that switches between High/Low/Medium/Off) or a remote control specific to the particular model of fan. So the dimmer NOT working except when "all on" is actually as expected and not a sign of a problem with the dimmer or the fan. Note that even if the fan does work somewhat when on a dim setting, that is not good for the fan motor.

So switching to a regular switch is a very good idea.

Based on your numbering scheme, it appears that you have 4 separate cables going into the junction box. Some additional work will likely be needed to trace out what goes where...

1 - Based on the extra, currently unused, red wire, my guess it that this is the cable to the fan. Specifically, the fan should have been wired up with two switches. One would be for the fan and the other for the lights. The black & red wires are switched hots. If switched separately then one could be on a dimmer for the lights and the other on a regular switch for the fan.

It makes no sense that someone would have run a /3 (black/red/white) instead of a /2 (black/white) for the fan, unless there was originally a double-switch. My theory is that the original configuration was:

and then someone said "let's put in a dimmer for the lights", but found out the hard way that they couldn't fit a dimmer plus a regular switch in the standard box. So they said "let's just wire everything together" and changed to the current configuration which does not work properly as you already know.

Assuming that cable 1 is the cable to the fan, there is a very important question:

If the light DOES work and dims with the dimmer, then replacing with a proper double-switch requires correcting the wiring at the fan (most likely removing it from the ceiling to separate the fan & light wires that are both connected to the black wire and connecting one to black and one to red).

If the light does NOT work, then the black wire is connected to the fan and the red wire to the light and you can replace with a double switch without doing anything to the fan itself.

2 & 3 - Not clear what is going on here. My best guess is that one of those cables (let's go with 2 for the moment) is the cable from the panel. That would supply a hot black which is connected to the dimmer and to cable 3. Then cable 3 is chaining on to another device (e.g., maybe the switched outlet in the next box, but could be anywhere). You need to figure out which one is the hot. This can get a bit tricky if you have no experience. You must do this very carefully. What I would do - and the pros may have better ideas - is to:

Assuming this works (only ONE hot), reconnect the wires as before. The wire that you identified as hot will now go to the common feed of a double-switch.

Now (provided everything above works as described - separate black/red for fan/lights, a single panel hot identified etc.) you can replace the dimmer with a regular double switch. Turn off the breaker again (obviously) and connect:

4 - UNKNOWN It is unusual to have a black wire connected to a white wire. That may be related to another switch of some sort, but not very clear. In general if everything was originally wired normally (which we know is not the case because of the hanging red wire) then "connect everything you aren't changing back to exactly the way it was" will work just fine. However, that is not the case here (because of the hanging red wire and because of "fan on dimmer") so a bit of caution is in order. Identifying where cable 4 goes and what it does is a very good idea.