So here is my conundrum: I'm dealing with some wavy walls in a very old home and clearly the framing is all over the place. The worst offending wall has what seems to be a pretty large almost 4' span bow in the middle of about a 10 foot wall. It's a nice outward belly U shape, maybe 1/2 to 3/4" span of a bow.

I'm looking to tile a backsplash over this and need to do something about getting this thing flattened. This obviously cannot be tiled on and is not allowing my butcher block counter to snug into place as it's rocking back and forth causing gaps between the walls at both ends.

My plan is to add a subway tile backsplash around 27" from the top of the counter and up the wall. I plan to cut and remove the sheetrock the span of the wall, above the counters, up to that 27" mark where the tile will end. - At the end of the tile run (just above the tile at 27") where the drywall will be removed and reframed, an open slab piece of shelving will be there to hide the junction, so I'm not too worried about that and have some room to hide things.

What I am trying to figure out is just what the best route would be to get these center studs trimmed and in plane with the corners. I cannot access the back wall or behind the studs as it's an exterior facing wall. So kerf cuts on the back wouldn't work. Given that theses studs are fastened to the back wall and not free standing, would the kerf cut straightening method even work here? Even if cutting kerfs in the front convex portion? I have a power planer on hand and am thinking of shaving the studs and sistering what I can on both the bowed studs and corner studs every so slightly to bring them into plane.

My concern ultimately with sistering or bringing OUT the corners too much is that it might cause a weird transition between the above drywall and below at the junction point I mentioned, creating a lip. Is it possible to trim a chunk out of the stud, as long as it doesn't exceed a certain percentage of the stud? Maybe a half inch? And then sister two brace pieces on there?

Any thoughts here on my dilemma? Any help would be greatly appreciated. 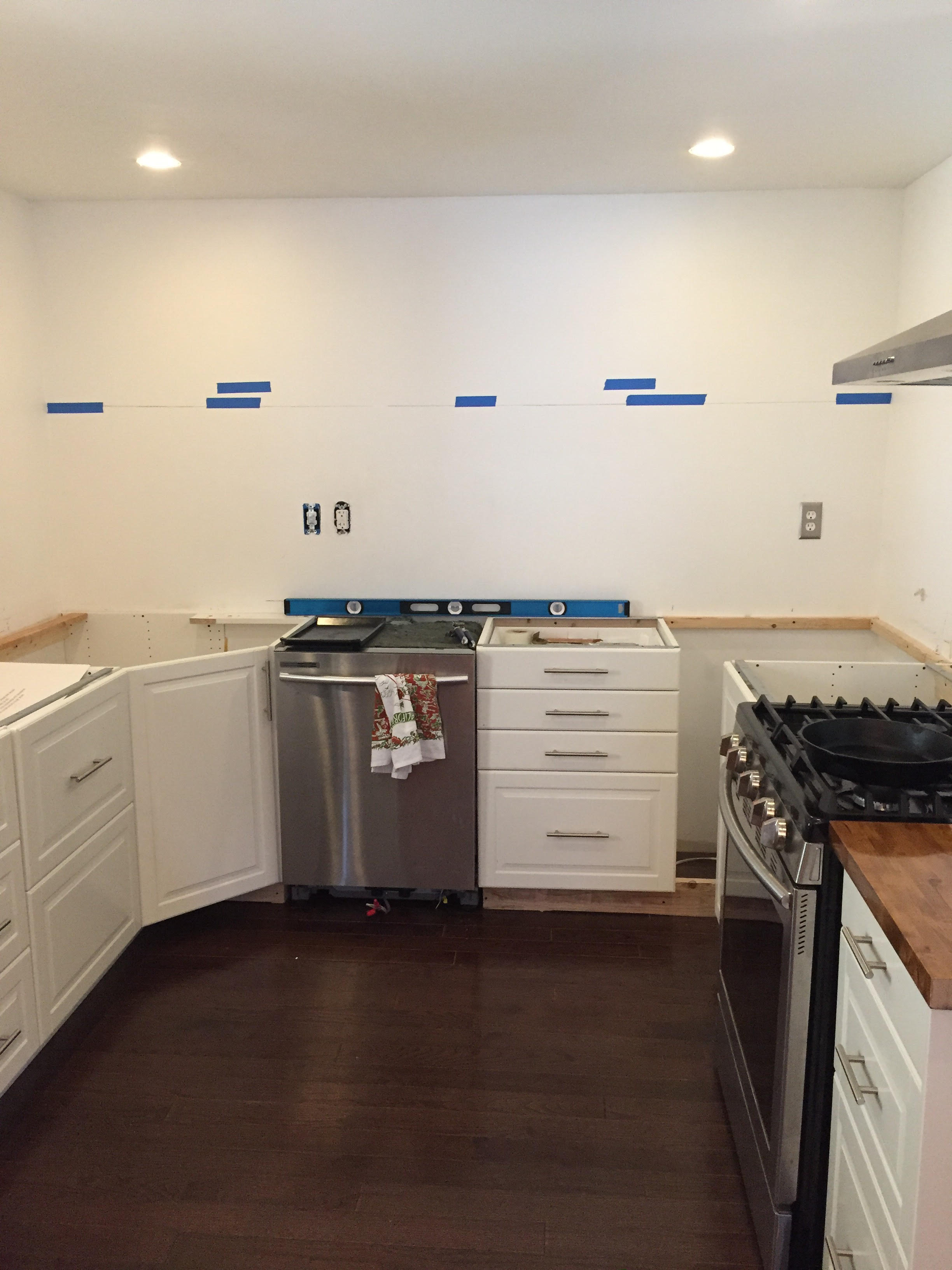 I'd be concerned about removing 3/4" from the studs on an exterior wall. I'd consider using 1/2" and 3/4" sheetrock or plywood to shim the sides as close as flat with the bow as possible, then use paneling, floor underlayment, or thin sheetrock over the whole wall to get a smooth surface for tiling. Since you're planning to open the wall anyway, another option could be to plane the existing sheetrock - not the studs - then sheet over it for a smooth surface.

Not the answer you're looking for? Browse other questions tagged drywall kitchens framing remodeling or ask your own question.

5
How do I locate studs in my wall?
4
What is the minimum distance wiring must be behind a tile backsplash?
0
Do I need to add supports before replacing a cripple wall stud?
4
Need some help with wall behind rangetop
1
Twisted Wall Studs In Tub Surround
1
How to mount butcher's block counter above washer/dryer?
2
How to ensure a Cement board wall that is only supported on the floor (without ceiling fixing) is stable?
1
Angle Braces In Place of Stud
1
Do I need to improve structure above basement window?