Connecting a Pseudo-Neutral to Pig Tail of GFCI

In my country. Our homes mostly don't have third ground wires connecting to the neutral wires of the utility pole because contractors are all into cost cutting. Although some important facilities have them. My old house didn't have neutral/ground lines and it's so far to the utility pole. Someone suggested at the home improvement forum how to provide neutral to the GFCI breaker input I bought for a project so as to power its circuit which needs 120V, but he fell short of providing any more details. He said: "on the need for 120V to power the GFCI's guts, here's an idea: a North American panel in the Phillippines has a neutral bus that is completely unused. Use it. Install a 5 VA (that should be enough) 240V center-tap autotransformer in there, tie the center tap to the neutral bar. Then land all the GFCI pig's tails on the neutral bar".

I have a Siemens QF260A GFCI Breaker: 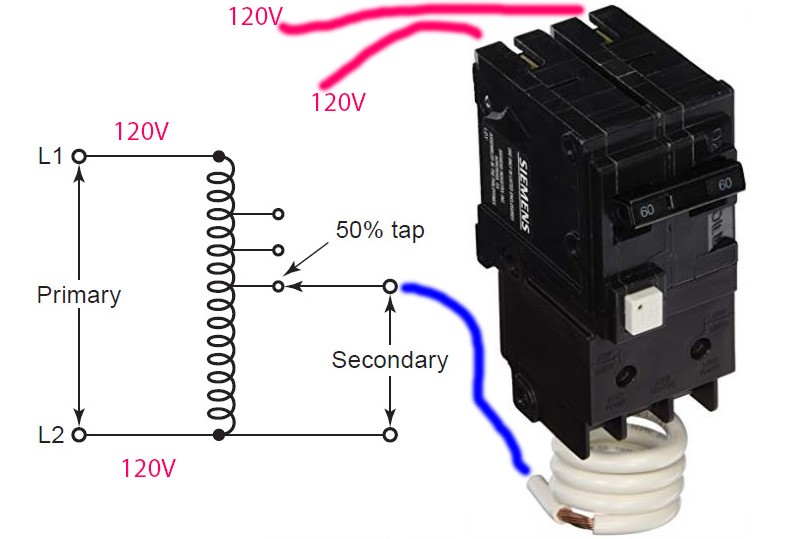 The poster instructs me to connect the GFCI Pigtail to the 240v autotransformer center-tap. Can it really work? Any possible problem that can occur?

In that case you would hook the red "outside" wires to a 240V supply, i.e. A different 240V breaker. That would cause the center black wire to synthesize a midpoint at ~120V.

Since the GFCI breaker is getting its outside wires from the exact same bus bars, the center black would appear as a neutral to it, and should suffice to power it.

GFCI devices don't care about safety earthing, so you're all set.

It wouldn't work to attach the two red wires to the outputs of the GFCI breaker; those are inside the GFCI protected zone, and you intend to use the black (pseudo neutral) wire outside that zone, so it would be a fault, exactly what the GFCI is designed to detect and trip on!

There is one problem, though. There is no listed method for attaching supply power to that breaker; it's designed to snap into a Siemens service panel and engage its bus bars. Therefore your best bet is to get a small Siemens panel that is compatible. That panel could support several such breakers: you could set it up as a subpanel.

Not the answer you're looking for? Browse other questions tagged protection or ask your own question.

0
Why two breakers (one for the line, one for the neutral) on a single-phase line?
0
Gfci supplies a dock keeps tripping and can't be reset only replaced
0
Using the existing neutral as a PE grounding conductor on a NEMA 10-30 outlet
0
Single Plug-In Breaker Connector or Interface
0
Are neutral wires linked to the neutral bar in the fuse box safe to touch