How do I bleed a noisy radiant heat system?

I have a gas fueled (converted from oil just a few years ago) boiler in my basement with an integrated tank-less water heating system for the showers/taps/etc. The output is three zones as shown in the picture below. Only zones one and two ever get used. Zone 3 maybe twice a winters gets turned on. Not shown in either picture is a drain spigot.

To describe what is happening here: The water supply comes from outside and splits. Half goes directly into the tank-less water heater part of the boiler and the other half move through the PRV and mixes in the air scoop with the return pipe from all three heating zones. There is one pipe and throughout the house the zones all drain into it. This enters the heating part of the boiler. One the left side of the boiler the water moves through a circulator (not shown) and then is split for each of the three zone valves. Each line after the zoning motor has a shutoff valve and a spigot.

Last year (late winter) I noticed my hot water heating pipes sounded like a river was flowing through them and efficiency was reduced. I had a plumber come out and he bled the system and recharged the expansion tank (hadn't been done since I bought the house three years ago). He also replaced the bleed valve on top of the air scoop. Unfortunately the baseboard radiators do not have any bleed valves (project for next summer).

This past weekend I was installing an ecobee and was shutting off the boiler periodically to do some wiring etc but now the pipes sound like a river again. 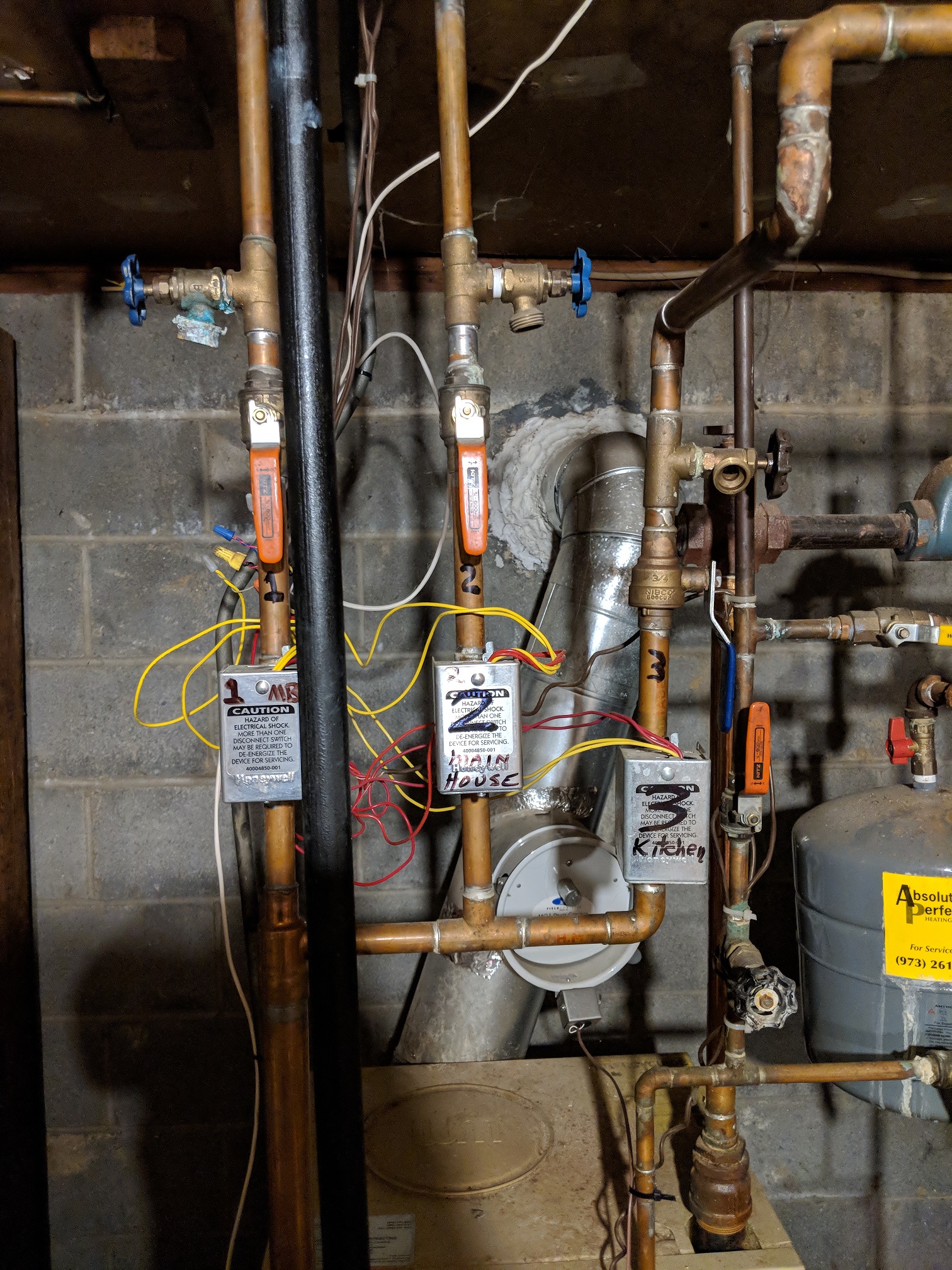 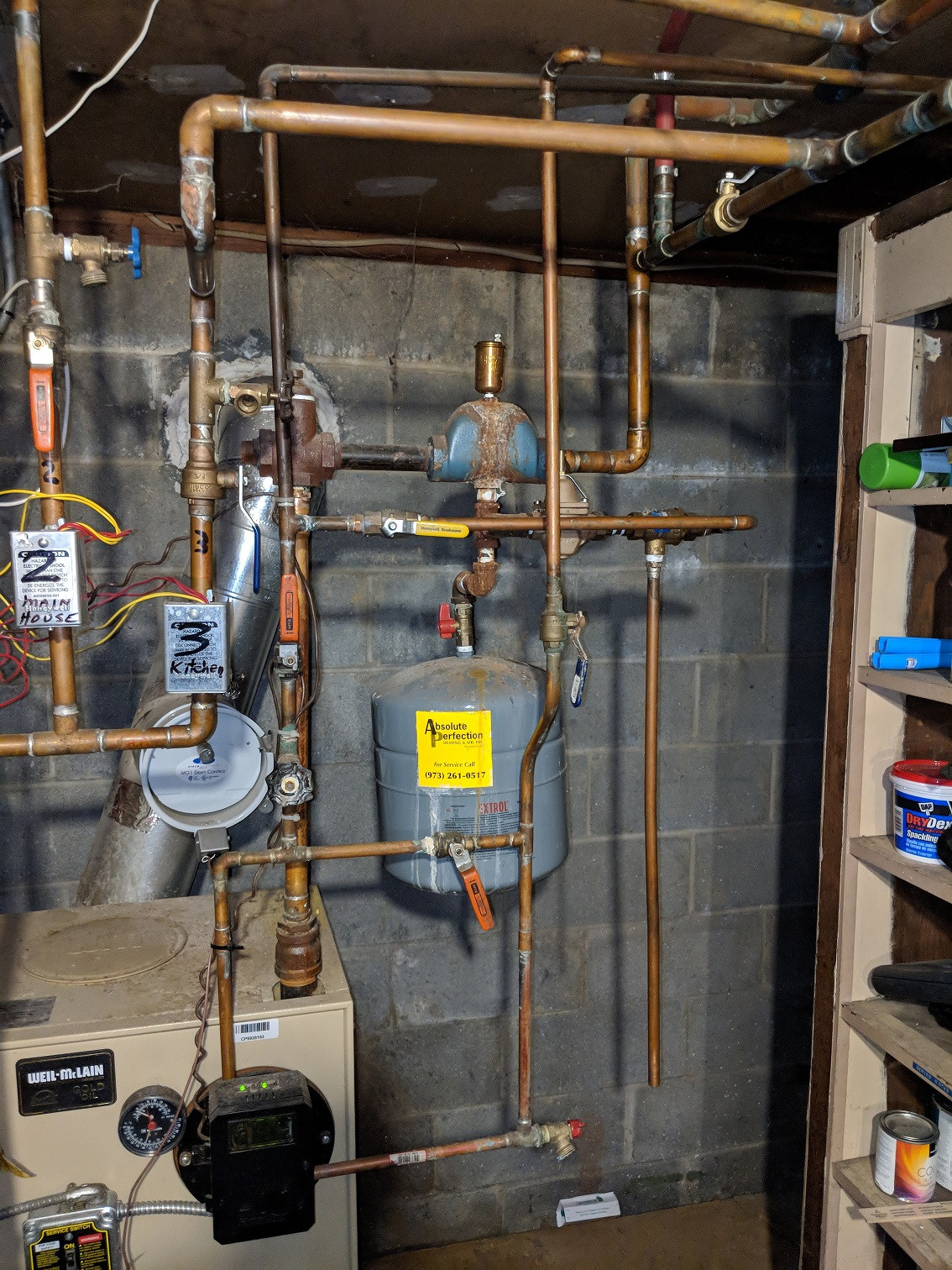 UPDATE: I went down to check the expansion tank and on a lark loosened the bleeder valve cap a little more (it wasn't previously tightened down) and I got a huge spurt of air. Maybe making it a little more loose will help the system.

I ended up not having drain or replace anything. Just loosening the shrader valve cap a little let all the air out and the system is working normally again. Thanks for your help.

This system has a typical layout and is easy to bleed.

When you're all done, bring the PSI down to 12 PSI, turn on all the valves you turned on (not the drains) and turn the furnace back on. Keep in mind that the pressure will rise once the water heats back up to normal temperature, if you happen to look at it later.

Generally the zones on higher floors will have more air than lower ones so I'd start there.

Not the answer you're looking for? Browse other questions tagged plumbing hvac heating boiler hot-water or ask your own question.

1
How can I purge air from a baseboard heating system with the spigots on the wrong side?
3
How do I bleed baseboard radiators without a bleeder valve?
1
Boiler heating extra zones
1
Is 68F too low for hot water heating thermostat? Final radiators not getting heat
0
Use CLR to clean stuck bleeder valve
0
How do I purge the air from a hot water furnace with zones
1
How do I bleed a very old radiator and identify whether my system is steam or hot water?
1
No water flow through zone of water boiler, all other zones working. How to get water flowing?